I wanted to show you a different view of the Church History Library so that you can get a better idea of how it is two buildings in one. The left side of the picture showing the “square” part of the building, which goes one floor below ground and five floors above, is the archival storage facility with its own HVAC, plumbing, foundation, etc. To the right is one wing of the “L,” where all of the offices, patron space, and work stations are. 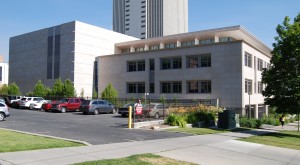 The back of the CHL. The conservation laboratory is facing us. It's that row of windows on the top floor that is recessed a little.

Today’s processing was a little emotional as I was handling an entire box of sympathy letters that the Brown’s received when word spread that Hugh was missing in action. 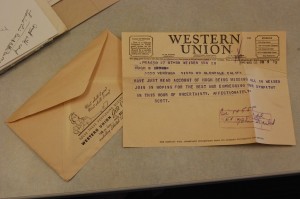 The Brown’s waited to hear about Hugh’s ultimate fate until the following letter arrived. Be sure to click to enlarge any image that is too small to read. 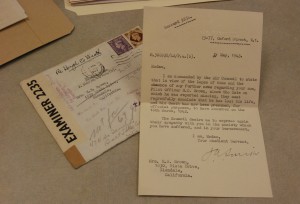 The British Air Ministry sent its final determination on May 31, 1943.

I transcribed the words of a poem that Hugh’s father penned to be used at a memorial service in Great Britain. I’ll let that close today’s blog.

A Father’s Salute to His Son

When you asked my permission in Great Britain to serve,
My memory leaped over time;
The fine steel of duty had touched a live nerve,
And it hurt – but I could not decline.

“To the saints in the mission I wish to return,”
You said, “my duty is there;”
My warning of danger I saw you spurn,
You replied, “Their dangers I’ll share.”

First as an Elder with a message of love,
You went on an errand of peace;
And then as an Eagle defending the Dove,
You have earned a double release.

From you to the mission – to us it’s the best,
A message of courage we send;
On the altar of freedom our love we attest,
And you gave your life for your friends.

Christ said such action is love at its best;
His sacrifice haloes our loss.
To follow the Master you met the great test,
While humbly we bow at the cross.

I put on my uniform – tunic and cap,
And salute you O brave son of mine;
O’er the years that must follow, faith bridges the gap,
Holy Father, not my will but Thine.

This entry was posted in Collections Processing and tagged correspondence. Bookmark the permalink.