Summer is a great time for blockbuster movies and trips to the drive-in. It’s also a good opportunity to look back at the movie theater history of Kingsport as well as the films projected on our town’s silver screens!  The archives has items representing six different theaters from Kingsport’s downtown area and two drive-in theaters at the outskirts of town, but there were several more in the area. We are hoping that people will share their memories of attending these venues and the movies they saw. The exhibit will be on the main floor of the library through August 14, 2017.

The left case highlights the history of the State Theater, as well as the Rialto, the Gaiety, and the Marbro Drive-in.

The first two theaters in Kingsport were the Queen, which was very soon renamed the Gaiety, and the Strand. The Strand was originally on Main Street at the corner of Shelby. In 1925, the owners moved their business to Broad St and the Gem theater took up residence at the Main St location. 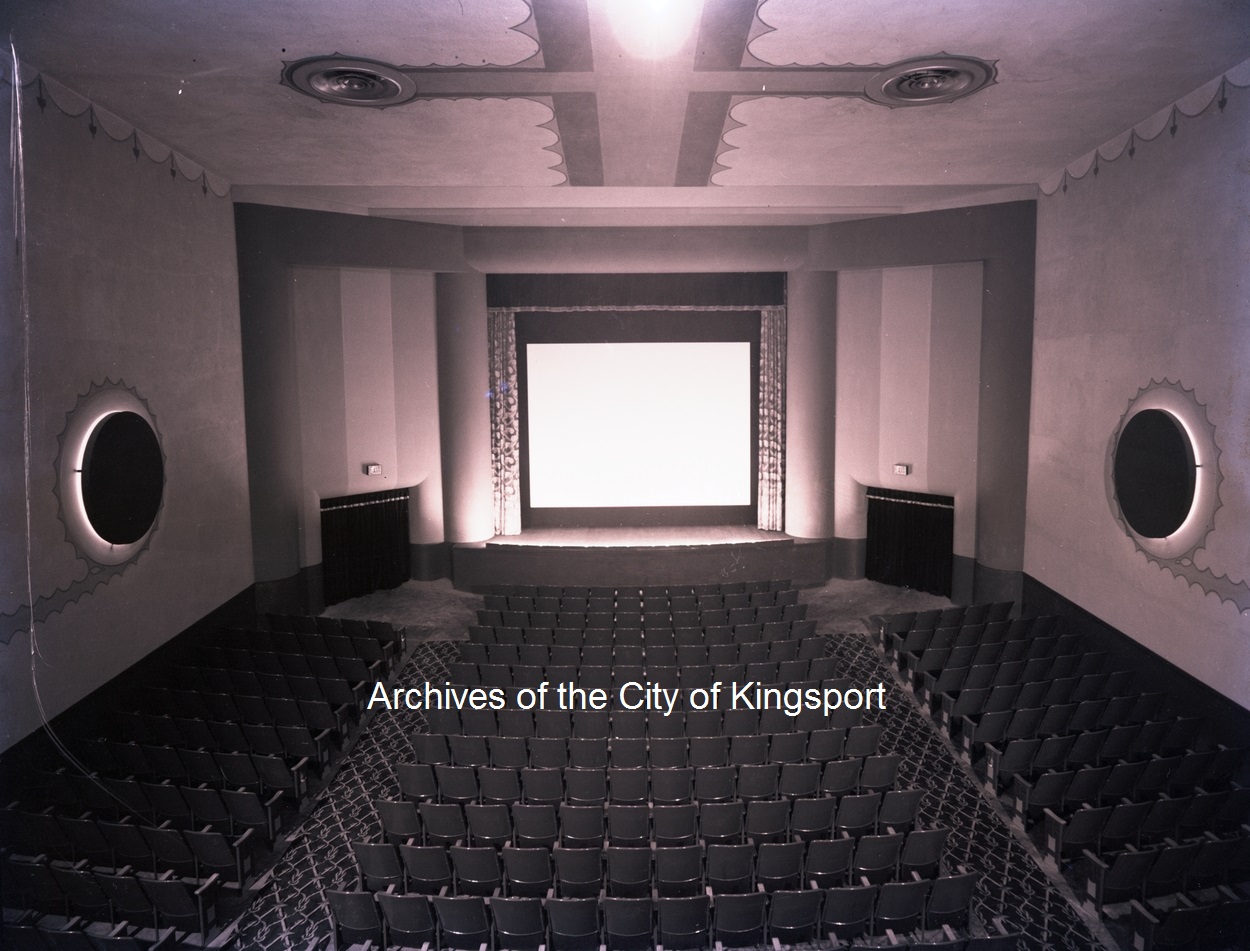 Sadly, in 1945, the Strand burned down. Here you see it as it was re-built in 1947. Currently, it is open as the Lamplight Theater. 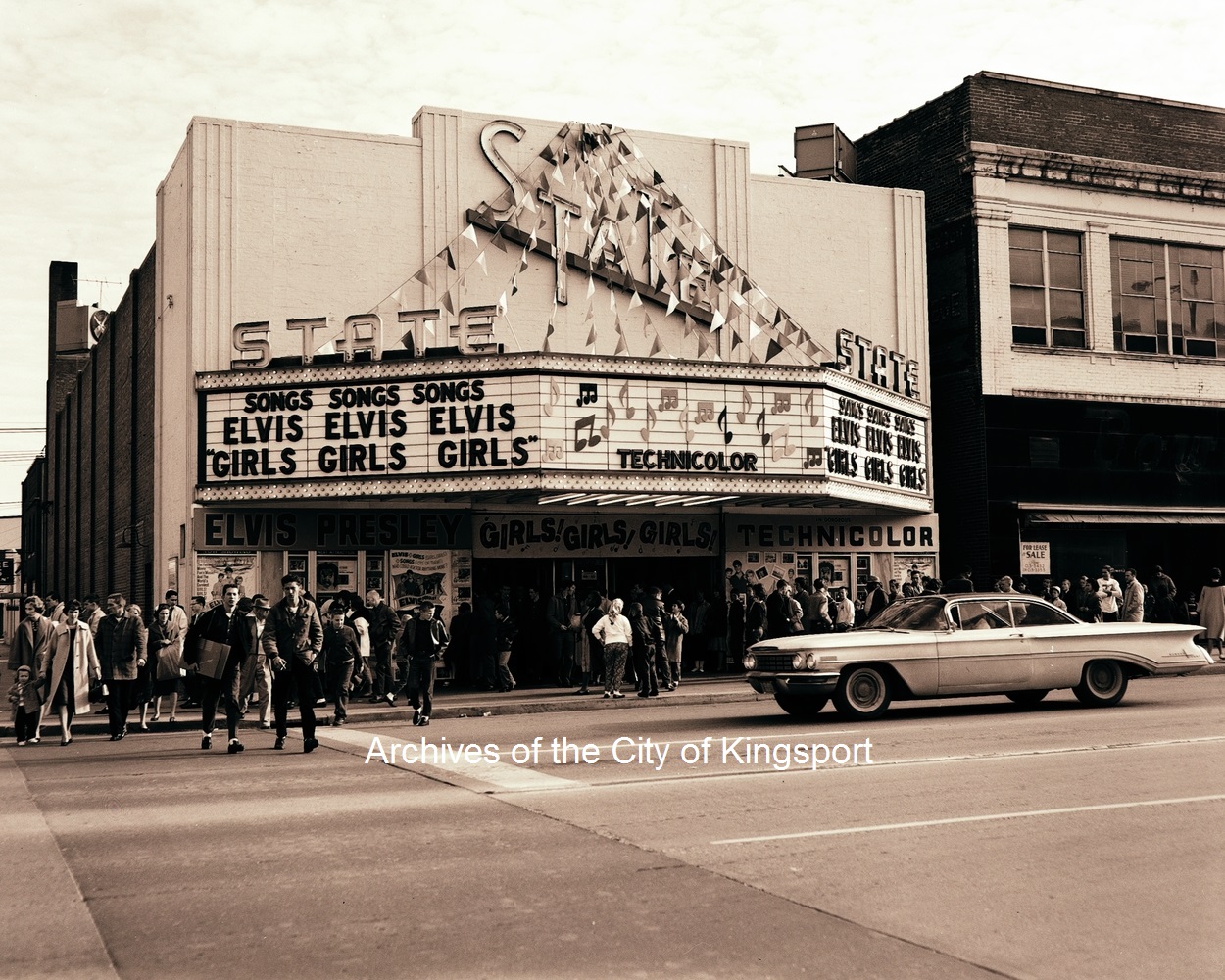 Broad Street and Market has always been the home of the State Theater. Here it is in December of 1962 for the showing of Elvis in “Girls, girls, girls.” 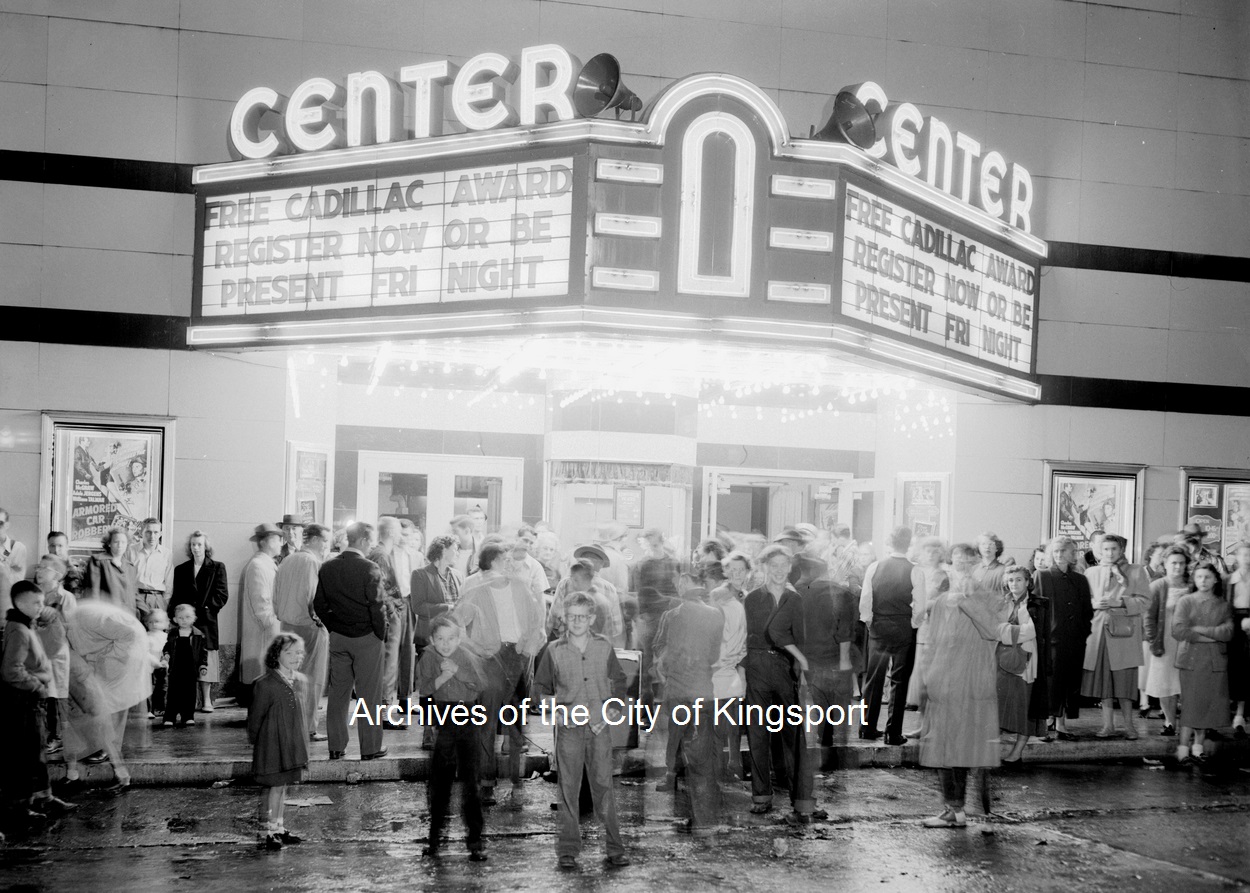 In its collections, the archives has the original program from opening weekend at the Center. It was open for 10 am matinees every day! You could sneak off and see a show while you were doing your errands and just not tell anybody! Located on Commerce St., the Center Theater also sponsored a children’s viewing club called the Buddy Club. It met Saturdays at 9:30. 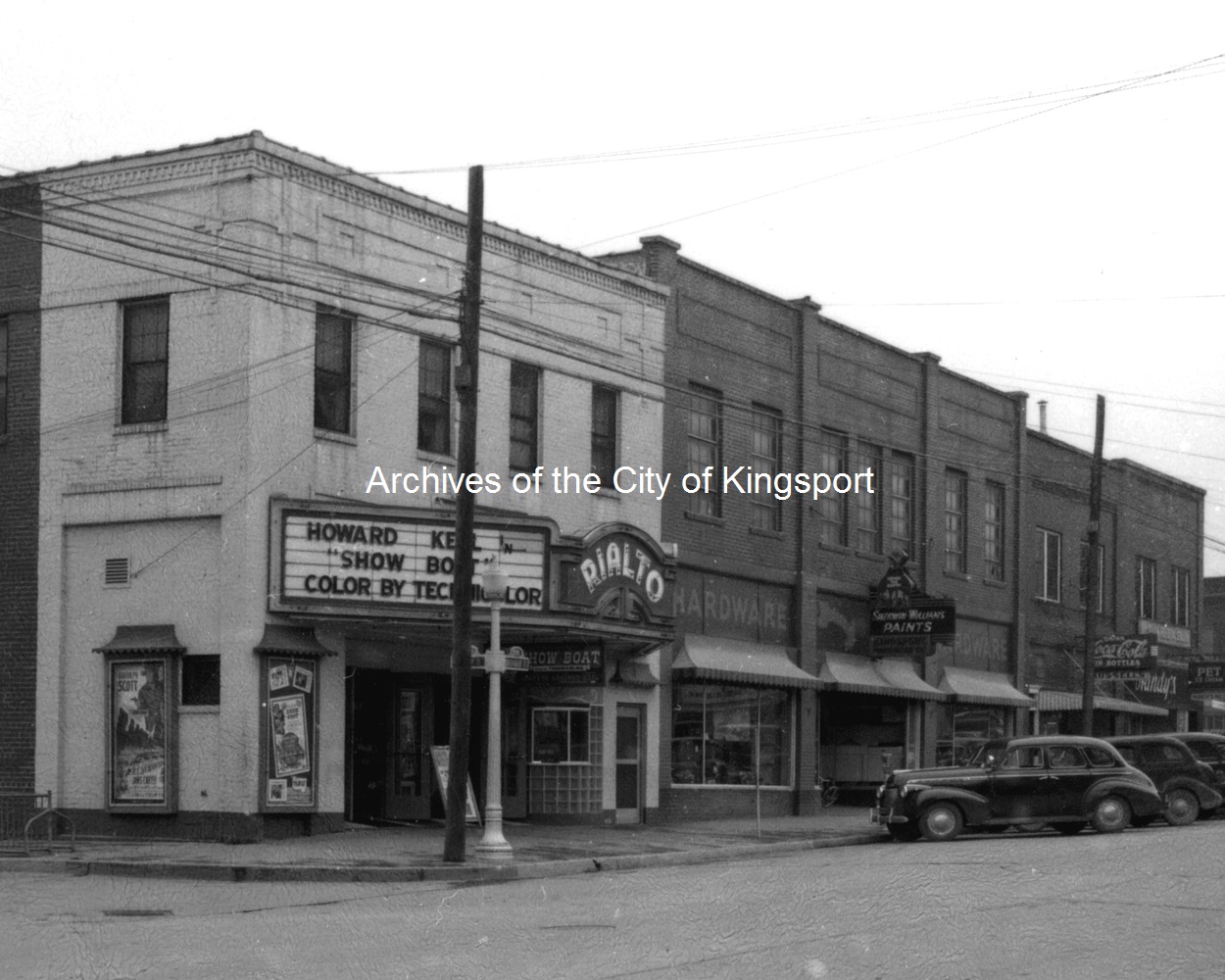 The Rialto was located at the corner of Cherokee and New Street. It hosted the very first Miss Kingsport pageant, where Anna Lou Crumley was crowned. When it closed, the Rialto became a recreation center and restaurant until it burned down. This corner is now a parking lot. 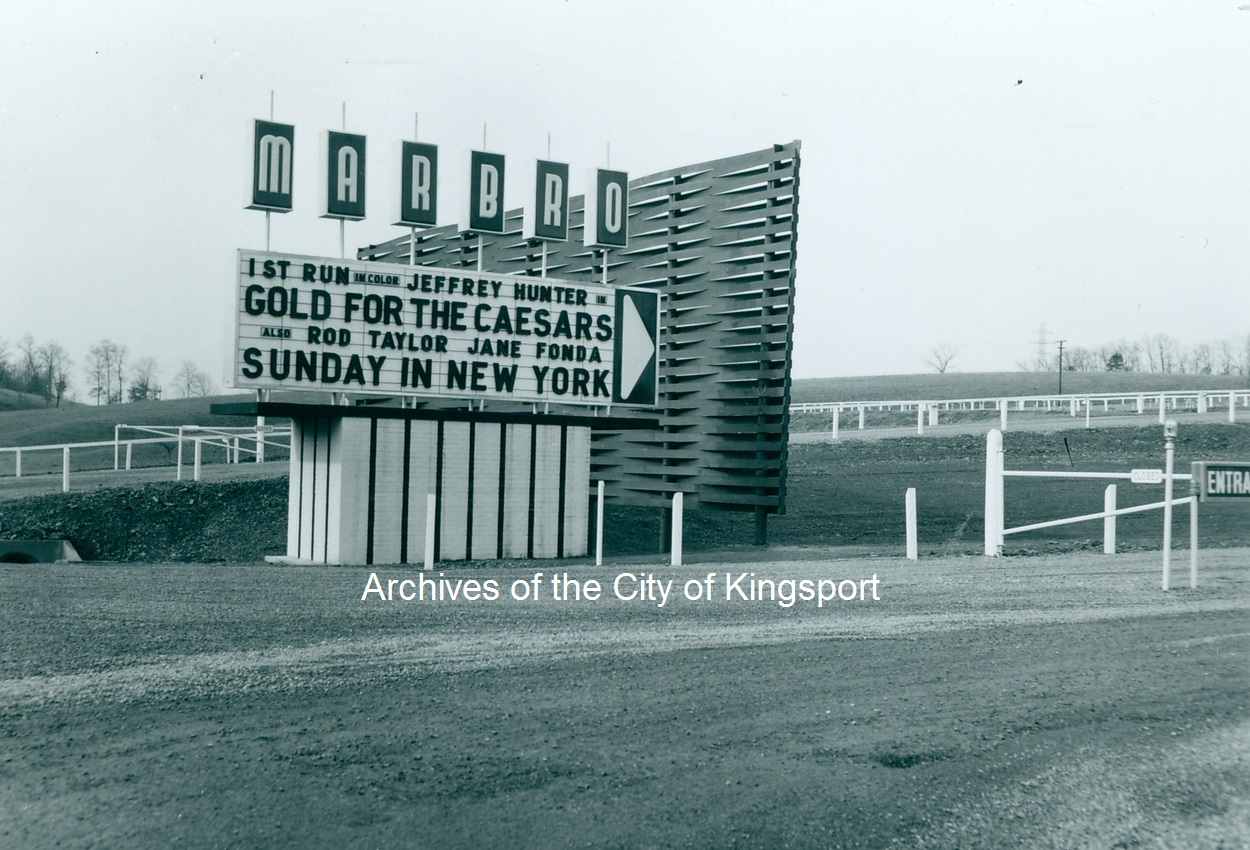 The marquee for the Marbro Drive-in, 1963. The theater was located at 2870 E. Stone Dr. and remnants of it can still be seen, today.

I grew up going to drive-in movies with my parents and brothers. We took our Plymouth Valiant station wagon and my parents would lower the back seat. Sometimes we came in pajamas and brought pillows. My mother would pop corn at home and bring soda pop, a very rare treat in our family. I remember the glove box folded down and had circle depressions in it to use as drink rests. The bowls we used for popcorn and the cups we drank from I often see being sold in antique stores, now. (Sigh.)

(Above: La Habra Drive-in, Imperial Hwy, California; opened in 1962.) The last drive-in movie my parents took us to was “The Sting.” After that, we were considered mature enough to attend a “walk-in” theater, as we called it. I didn’t return to the La Habra Drive-in until I was dating age. It stayed open until 1989, long enough for me to go there on a date with the hubs. 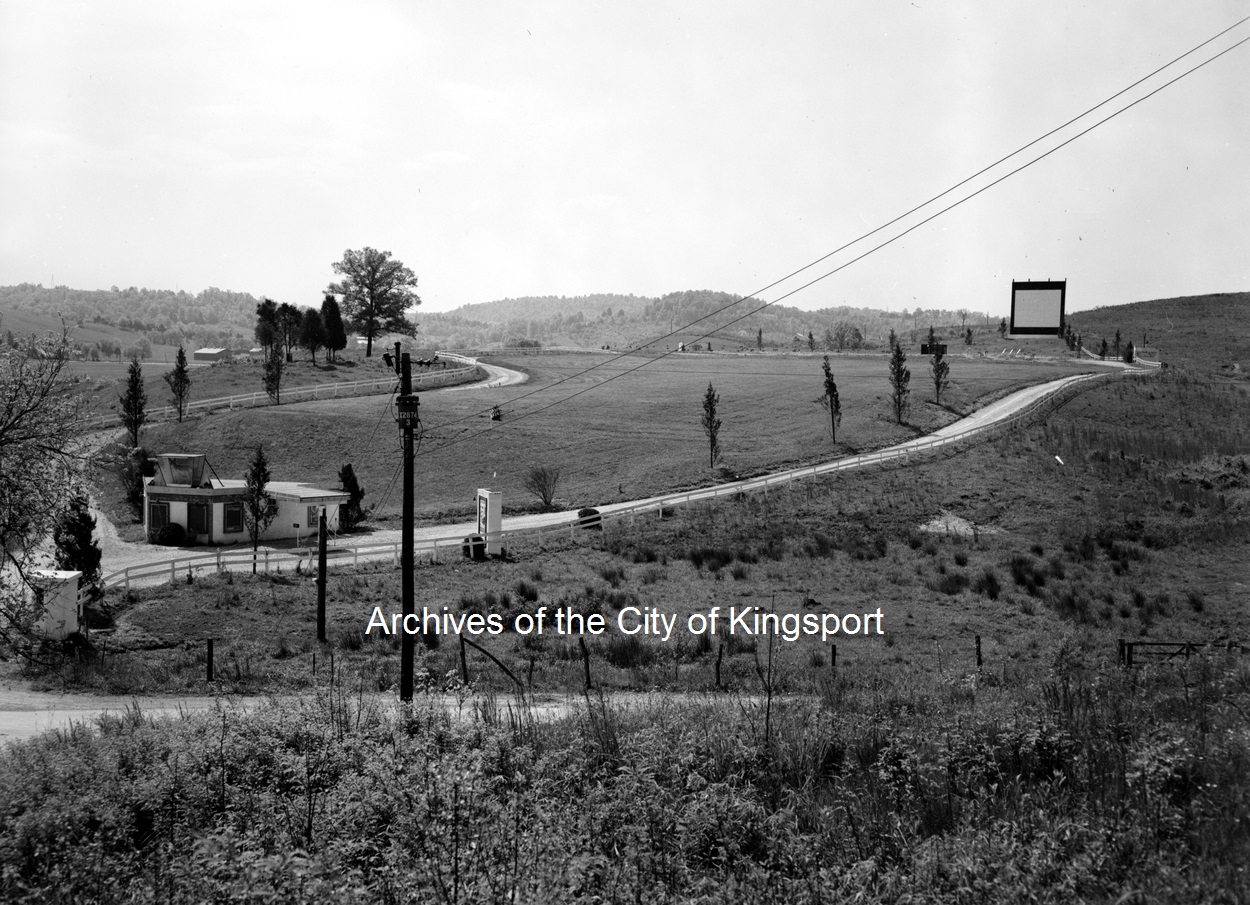 The Archives of the City of Kingsport has many more images of historic Kingsport theaters, as well as memorabilia; far too many to include in one exhibit. It is definitely worth a trip to the archives if you have an interest in researching the subject. The exhibit is full of charming details and movie facts that illuminate this aspect of Kingsport cultural history. 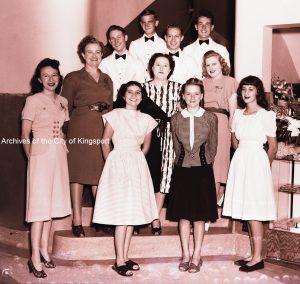 We hope you will come see the exhibit at the library; maybe on your way to a movie. Popcorn and Milk Duds, not included.

Feature image: Children attending a matinee event at The Strand.