Back in April, 2014, I photographed the dismantling of the Ambrose Gaines/John Anderson cabin on Highway 11 W in Kingsport, Tennessee. The next month, I began photographing the reconstruction of the cabin at the Exchange Place in Kingsport. The Exchange Place occupies a portion of farm land once owned by John S. Gaines. Both Gaines properties were purchased from the 1756 Pendleton Land Grant, a geographic region that defines this area historically. John Gaines later sold the current Orebank Road site to John Preston. Following is a photo essay I’ve created to document the reconstruction and restoration of the log house on the Gaines-Preston Farm.

May 19, 2014 – The Exchange Place Association hosts a Groundbreaking Ceremony. This video gives a history of the home and farm occupants and owners and introduces the Burows, for whom the cabin will be named.

May 28, 2014 – Site for reconstruction is located in front of the barn. The ground is leveled and foundation is begun. 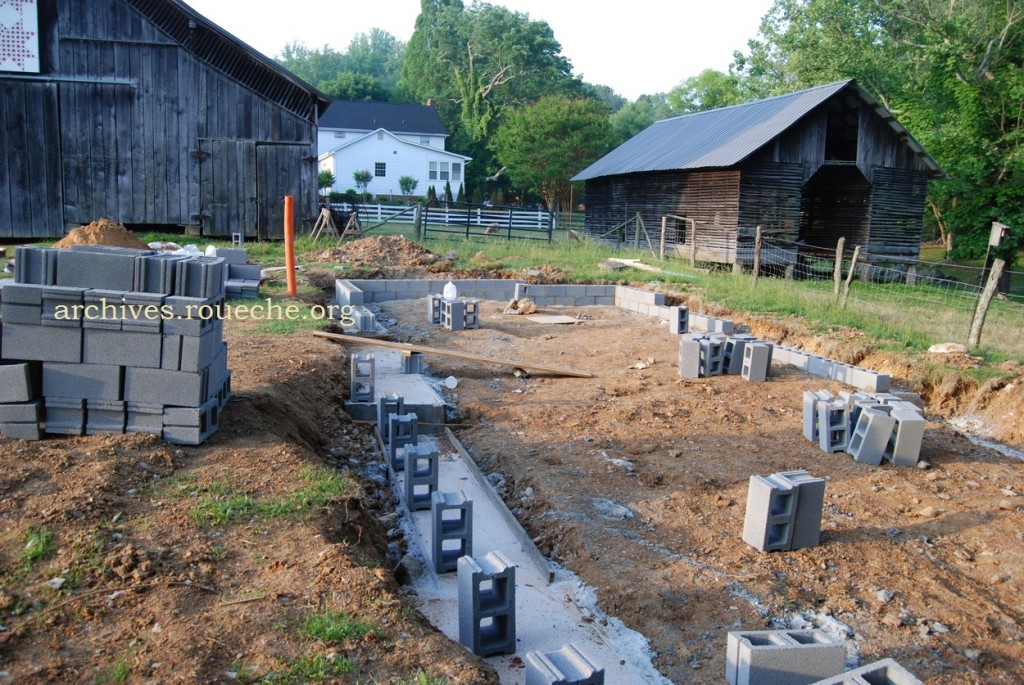 The logs are laid out on the main lawn and are cleaned and inspected. 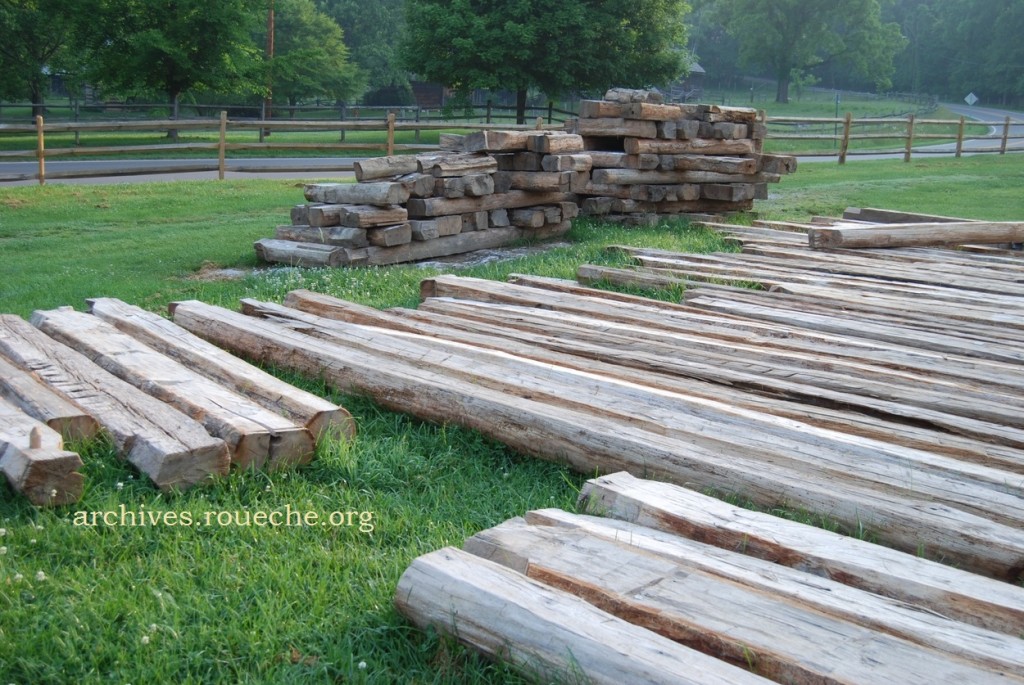 Labeling at time of dismantling assists carpenters in reconstruction. N for north, W for west, etc. 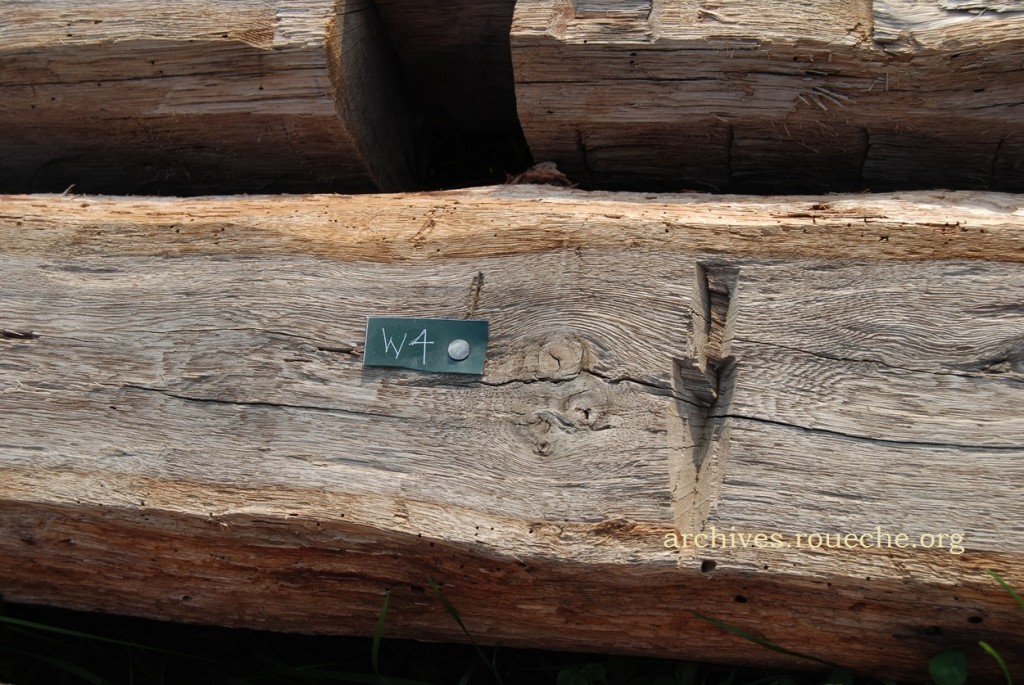 June 2 – The foundation progresses and stones are procured for it. 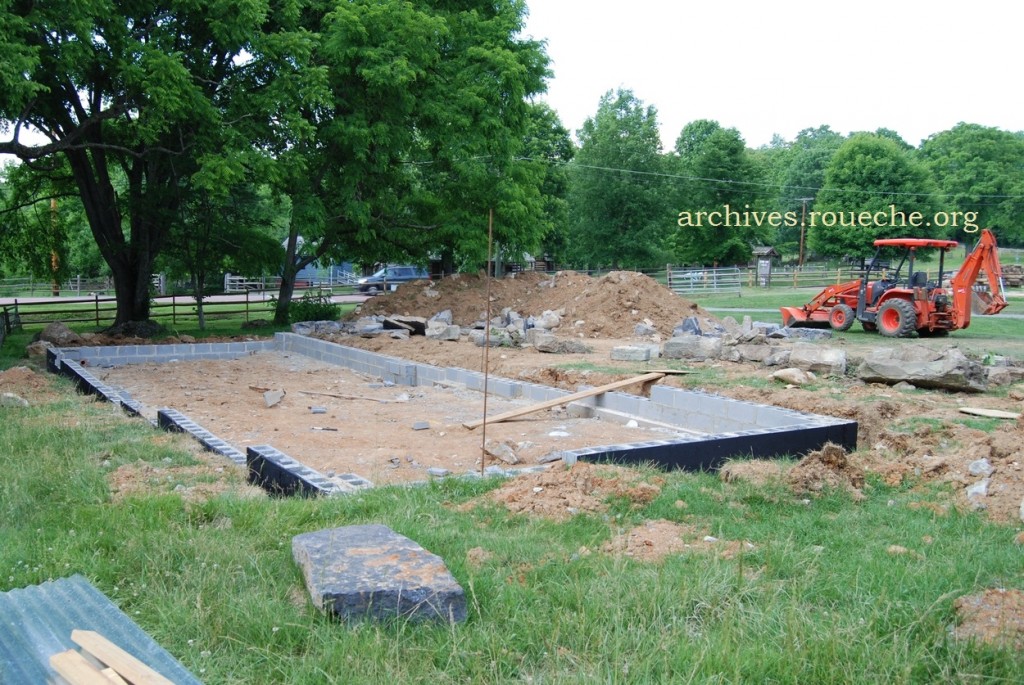 June 9 – The temporary workshop gives the carpenters a place to prepare the logs out of the hot, summer sun. 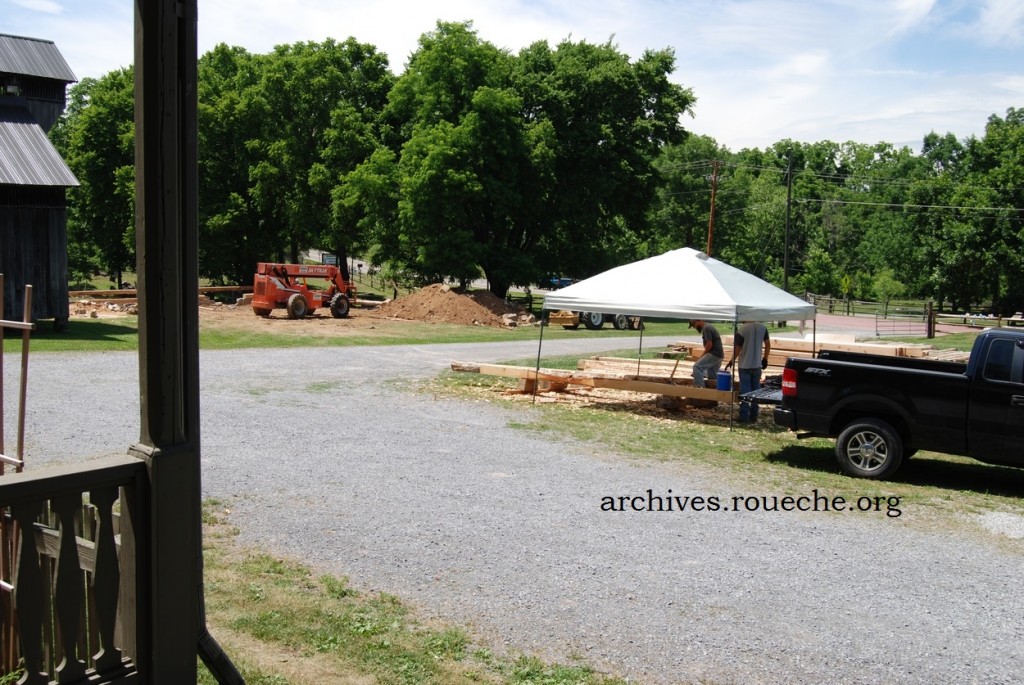 The quickest way to get a log onto the wall. 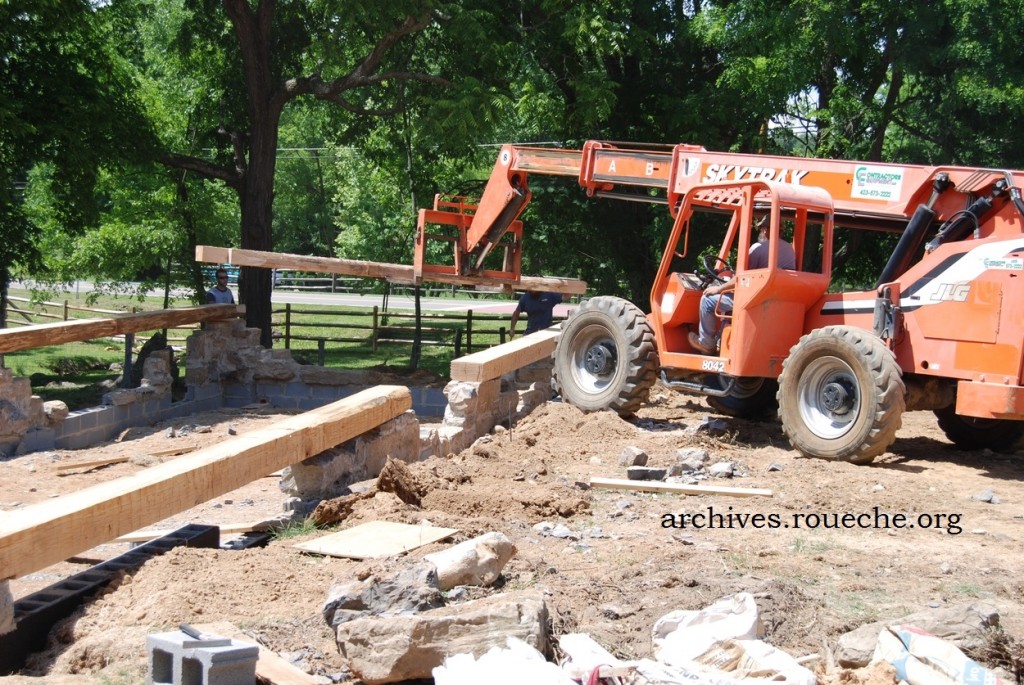 June 13 – The structure begins to take shape. Enough stone builds up the corners that logs can be added. 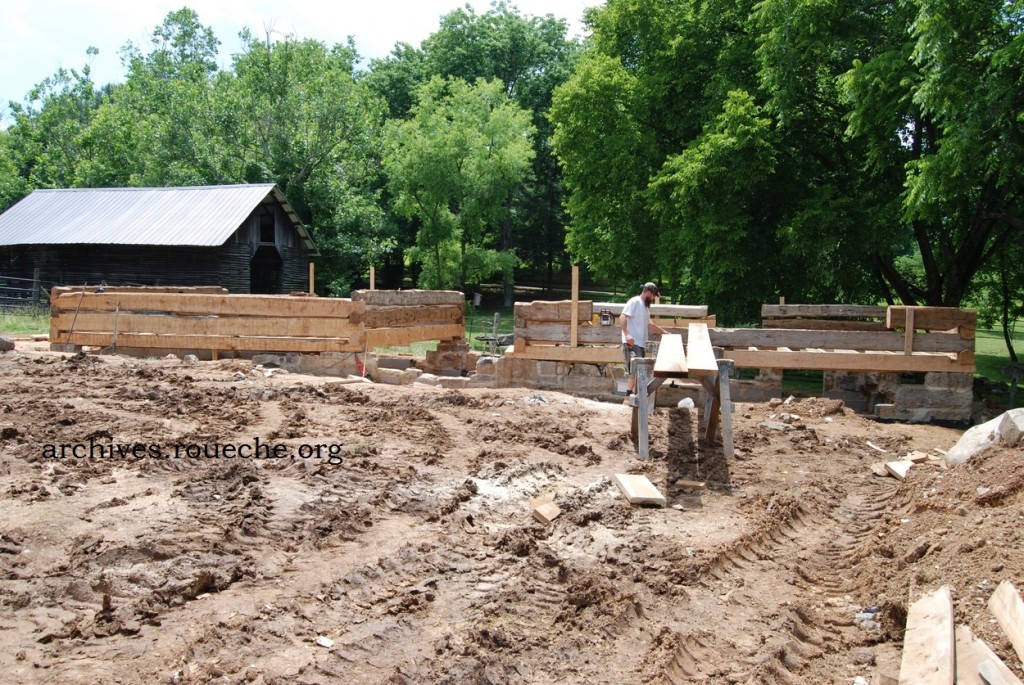 June 17 – Floor joists have been installed on both sides and the left side begins to rise. 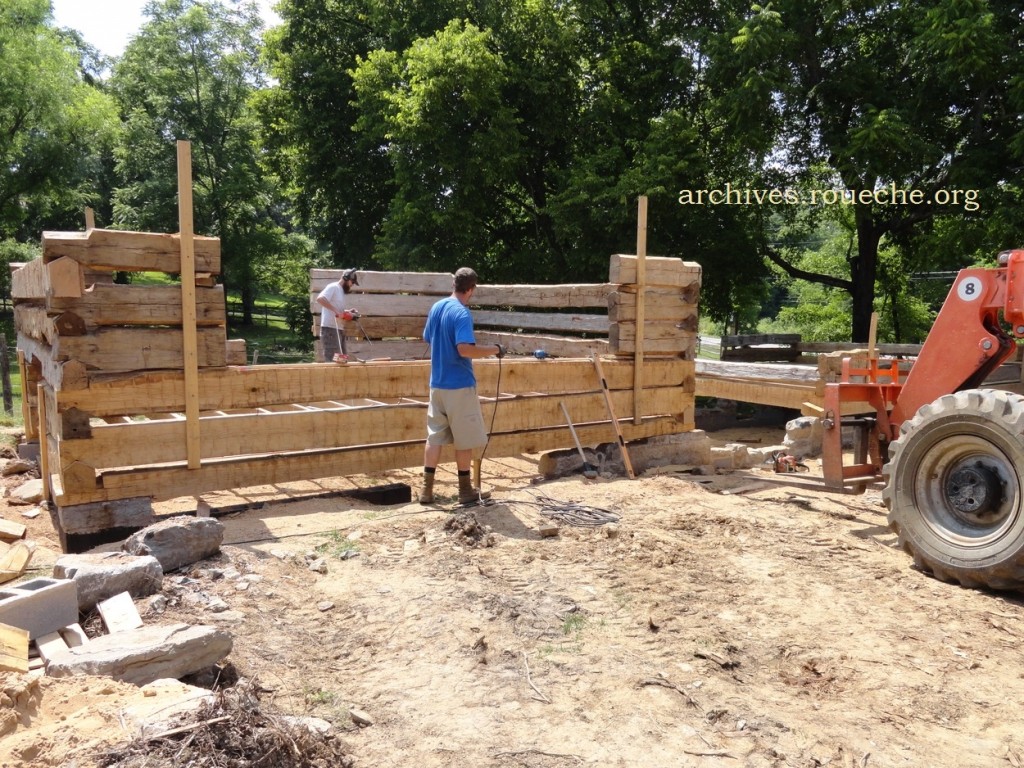 The Gaines-Anderson cabin had a double center wall without interior access between the two halves. In this photo, it becomes apparent that The Burows Museum is being constructed with a dog trot design and both sides will be accessible from the center.

The carpenters are drilling the logs to accommodate electrical requirements. 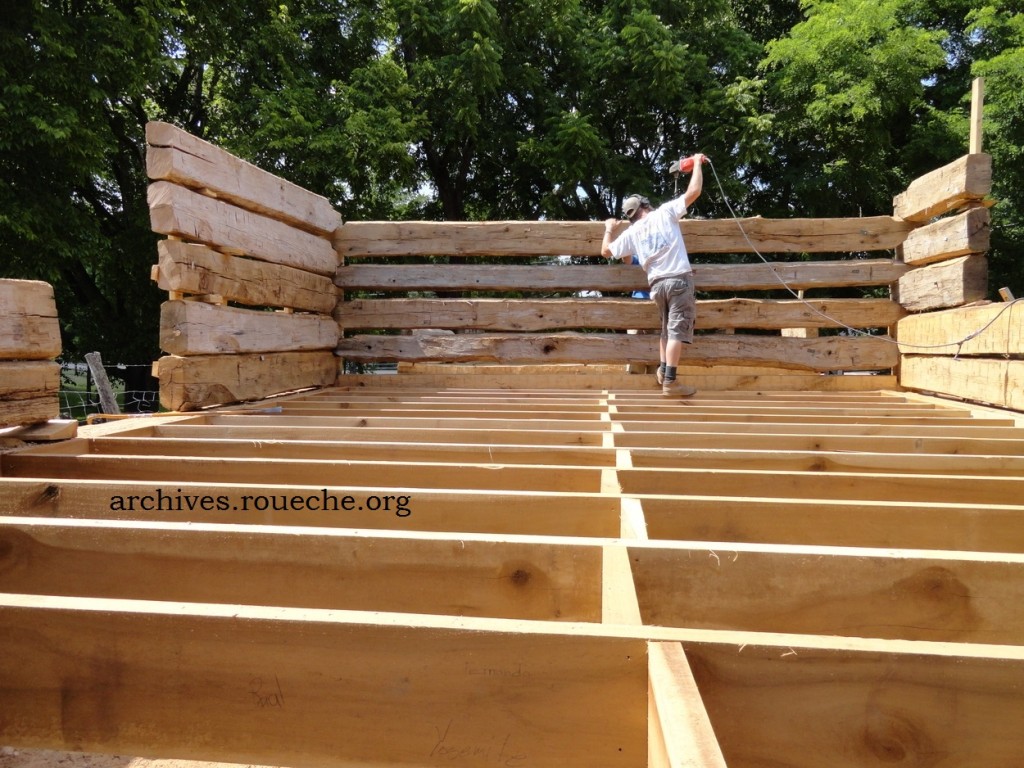 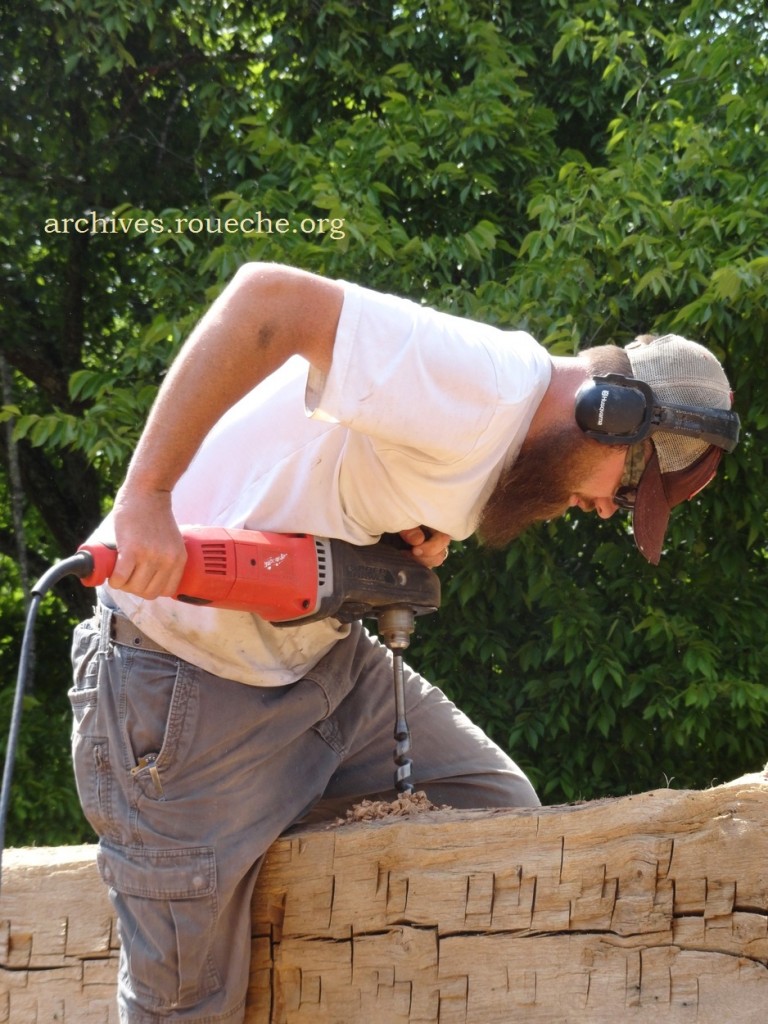 June 20 – Attention is now directed toward the right half of the structure. 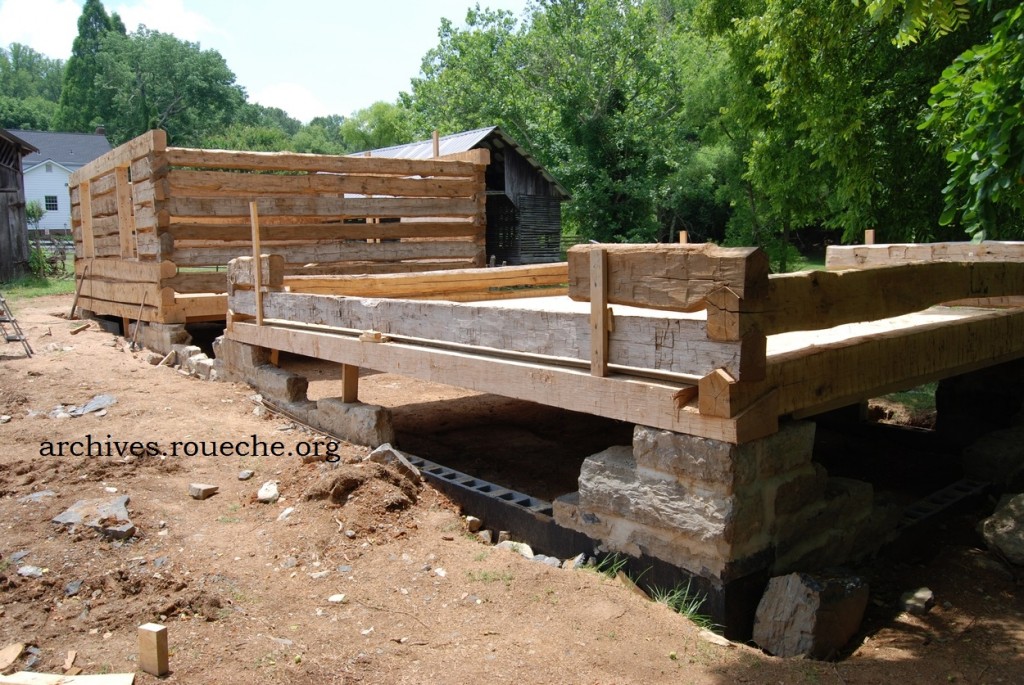 June 24 – Some days I use a zoom lens and photograph the cabin without getting out of my car. . . 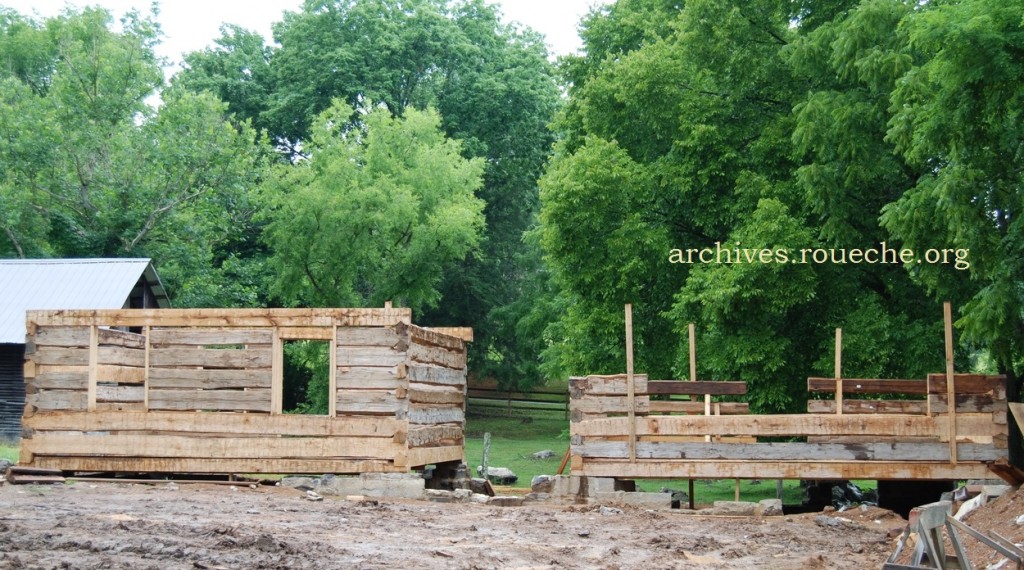 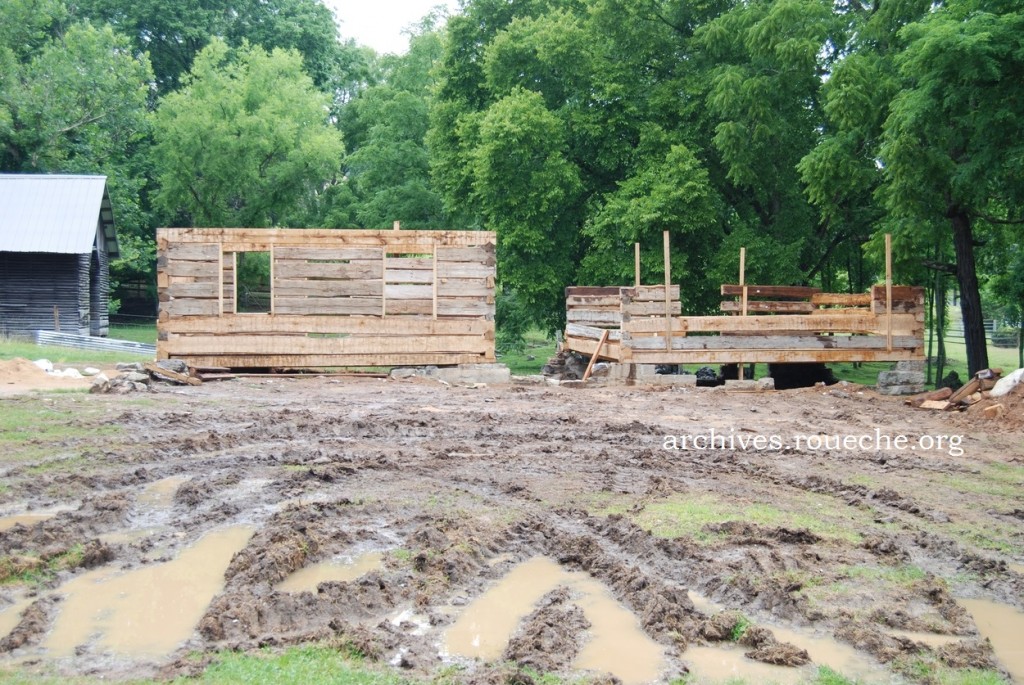 June 30 – Bringing more logs which have been stored on the lower acreage. 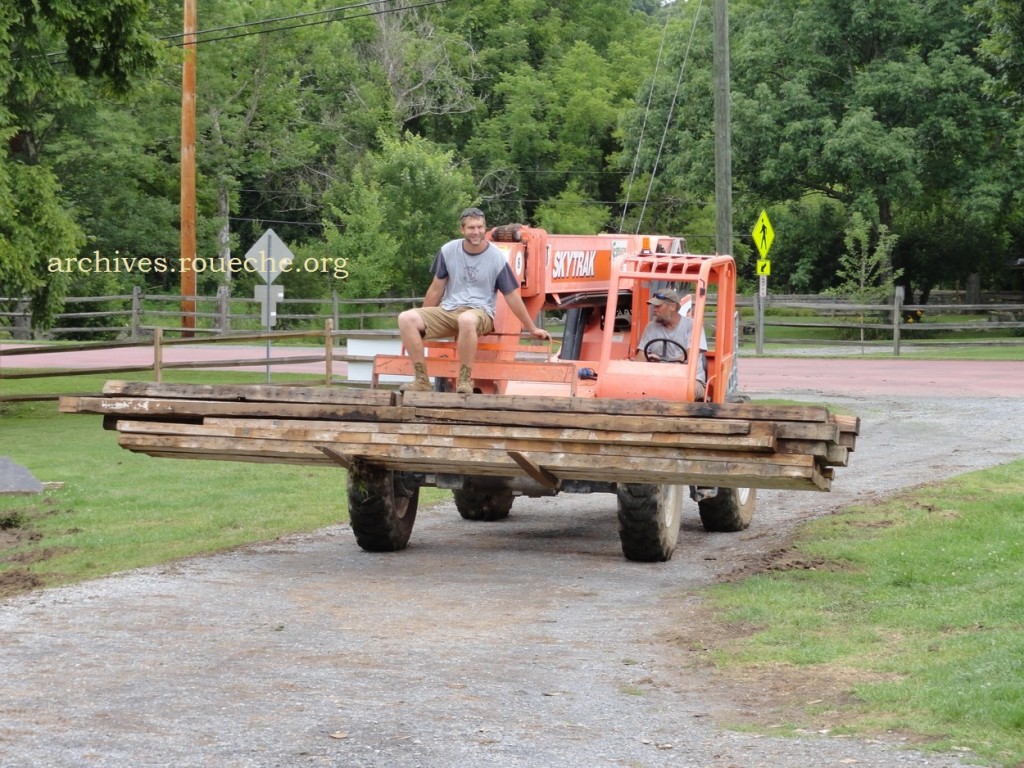 July 5 – The logs for the upper floor are assembled next to the site. 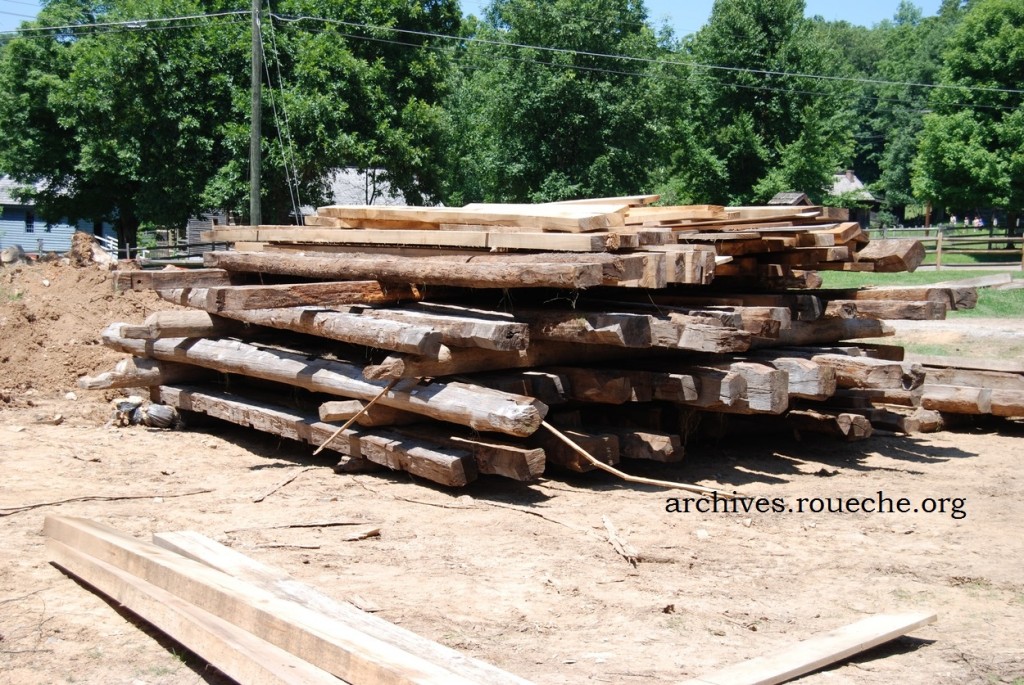 July 10 – Contractor Mike Faust. He has nicknamed me, “Paparazzi.” Here he is installing the joists for the dog trot. 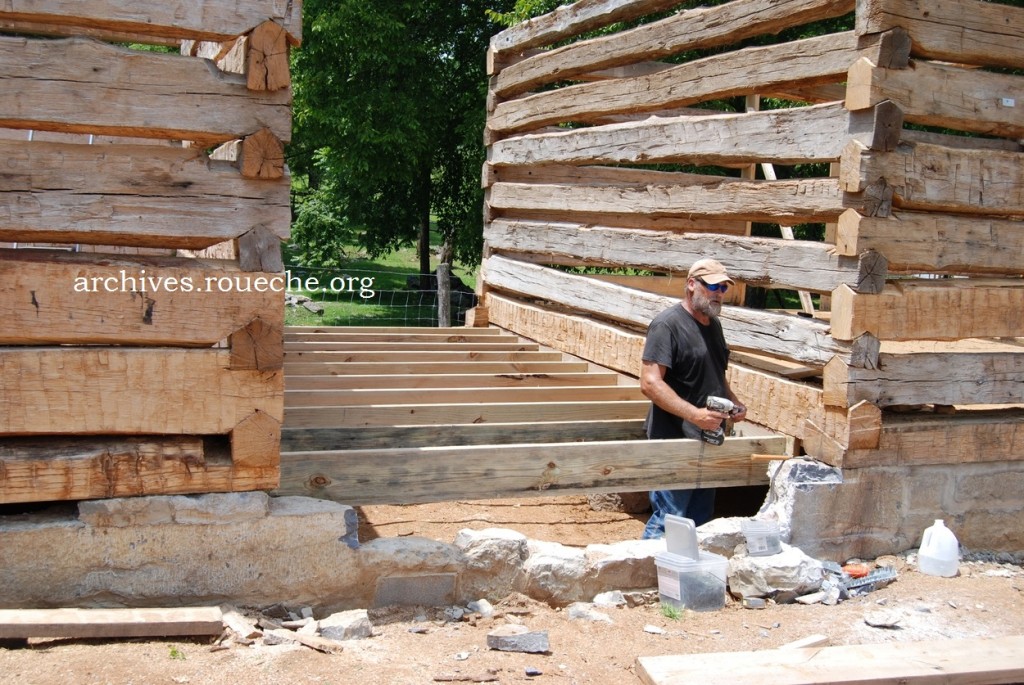 July 16 – Floor boards for the first floor are completed on a beautiful East Tennessee summer’s day. 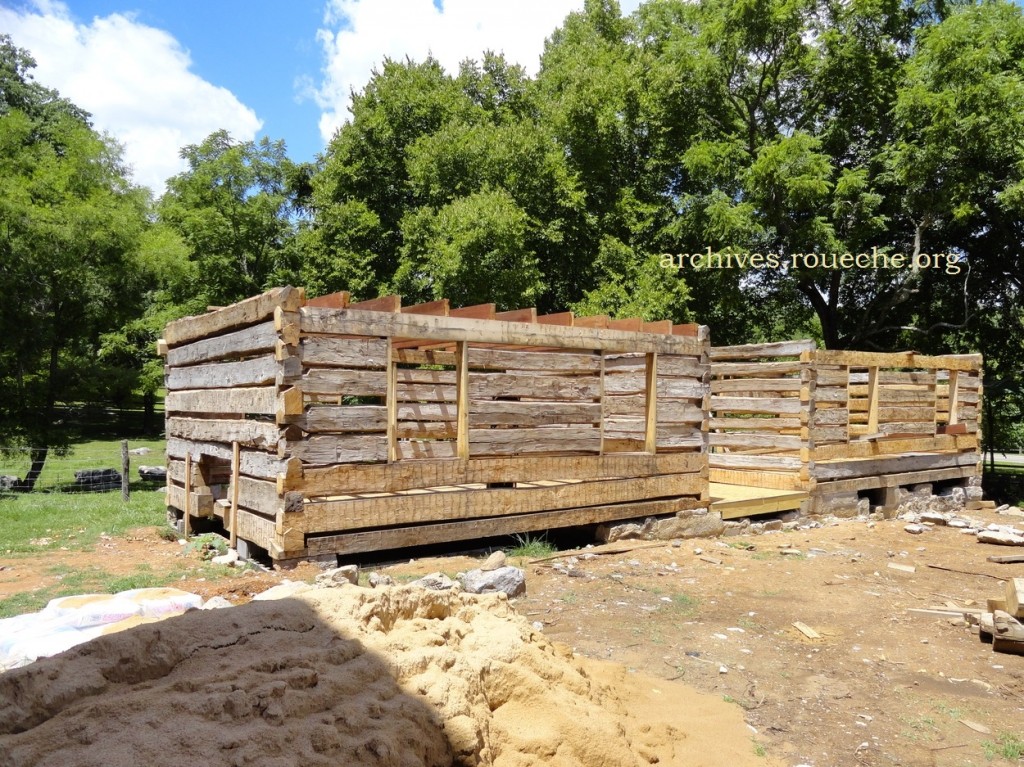 August 4 – Construction slowed at several points when new lumber had to be procured from freshly harvested trees. The carpenters prepare the new logs with hand tools.

Mr. Faust’s carpenters are the nicest people and were willing to answer all of my questions.

August 4 – The joists for the second floor are installed. 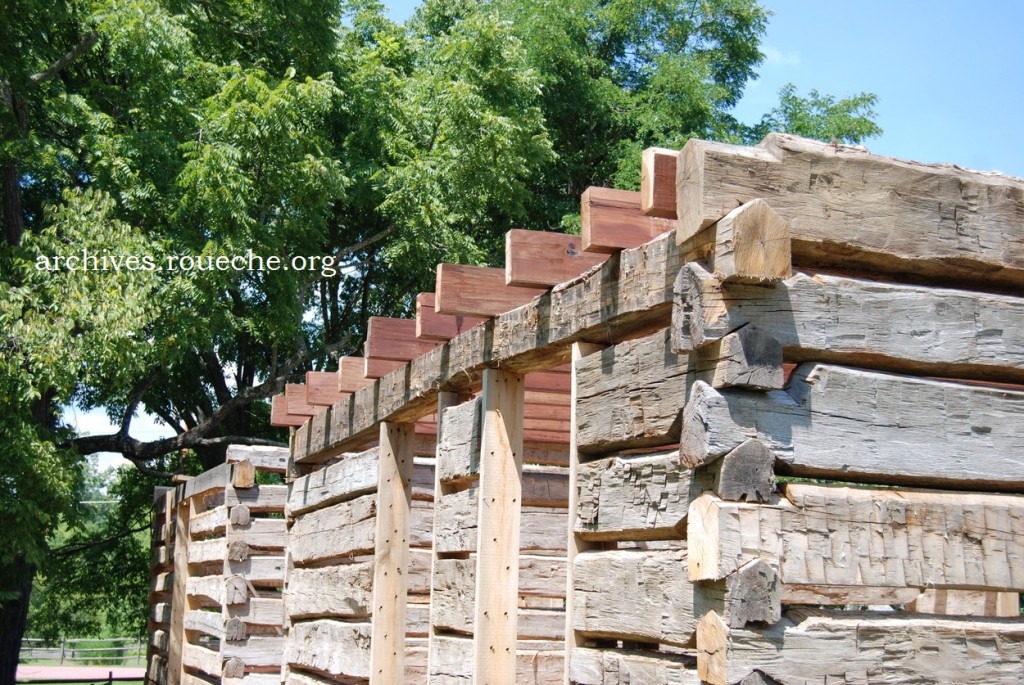 August 22 – Framing for the roof is constructed on the lawn. 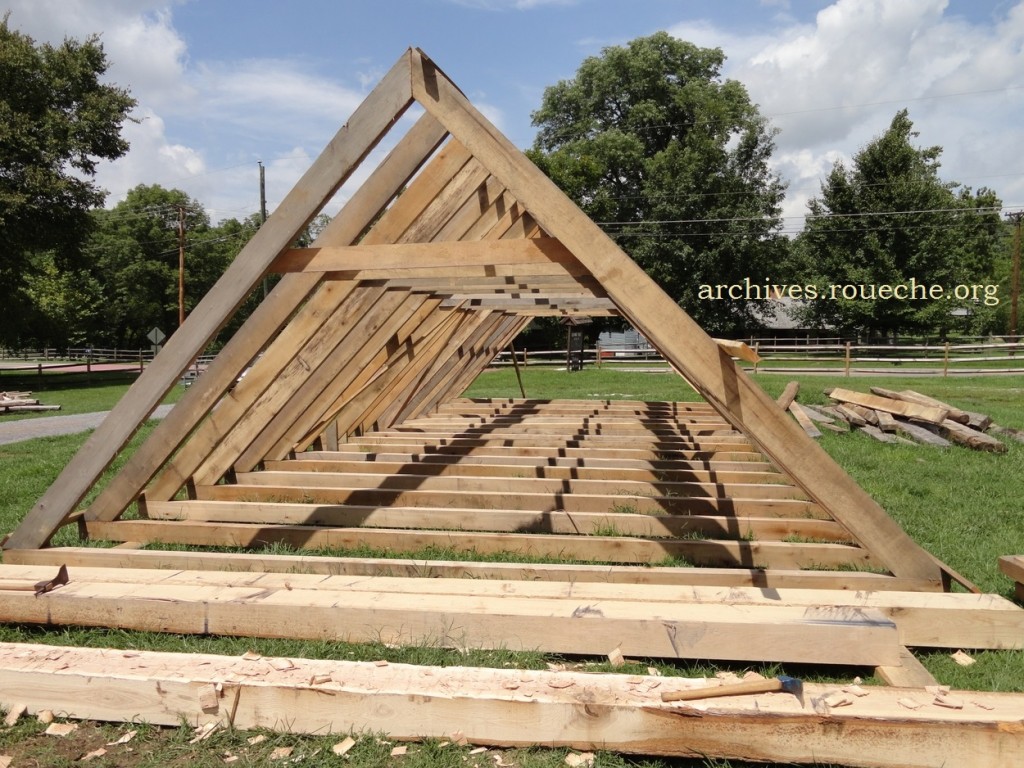 September 12 – Framing for the left half is finished. The dog trot door is visible from this angle and more of the stone work has been completed. 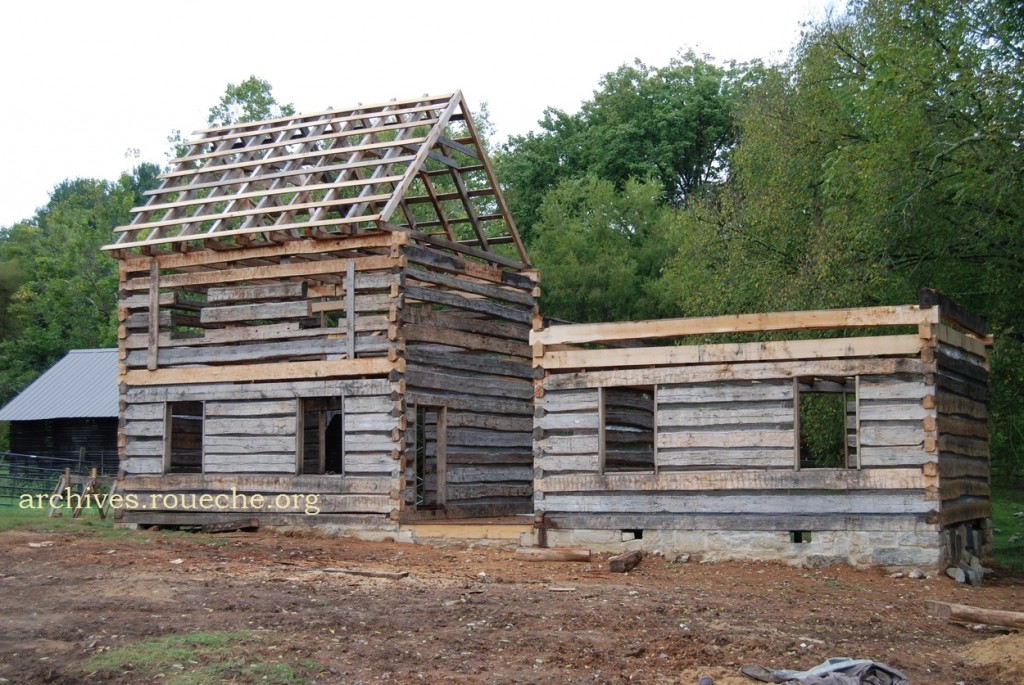 September 24 – The Exchange Place Association secures the services of a videographer and publishes an amazing update on the construction. Watch it here.

October 14 – The second floor on the right half begins to rise. 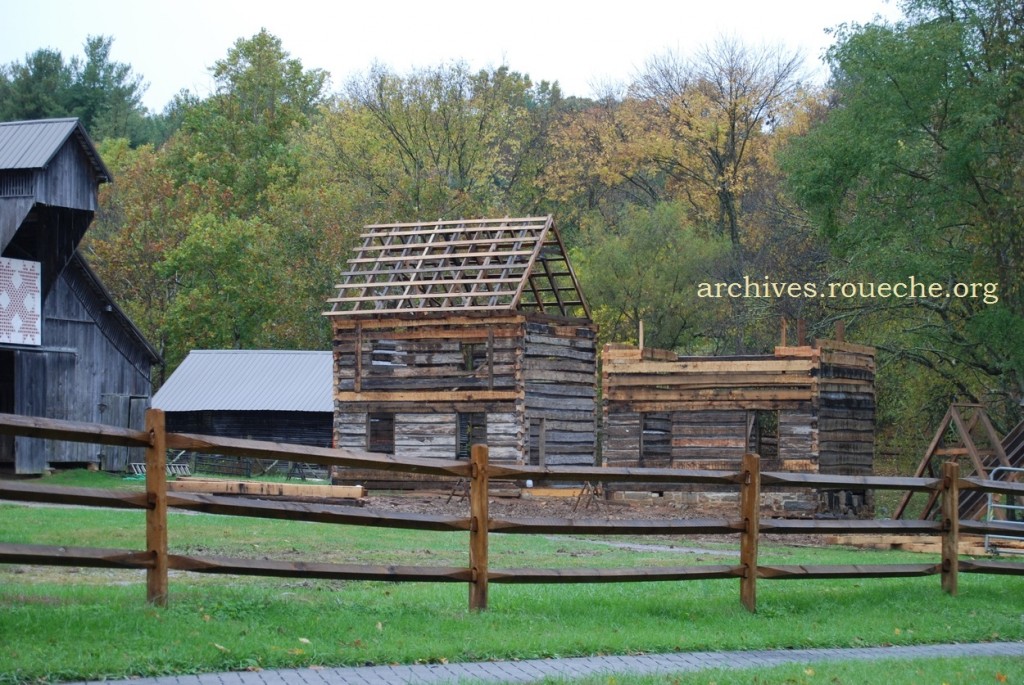 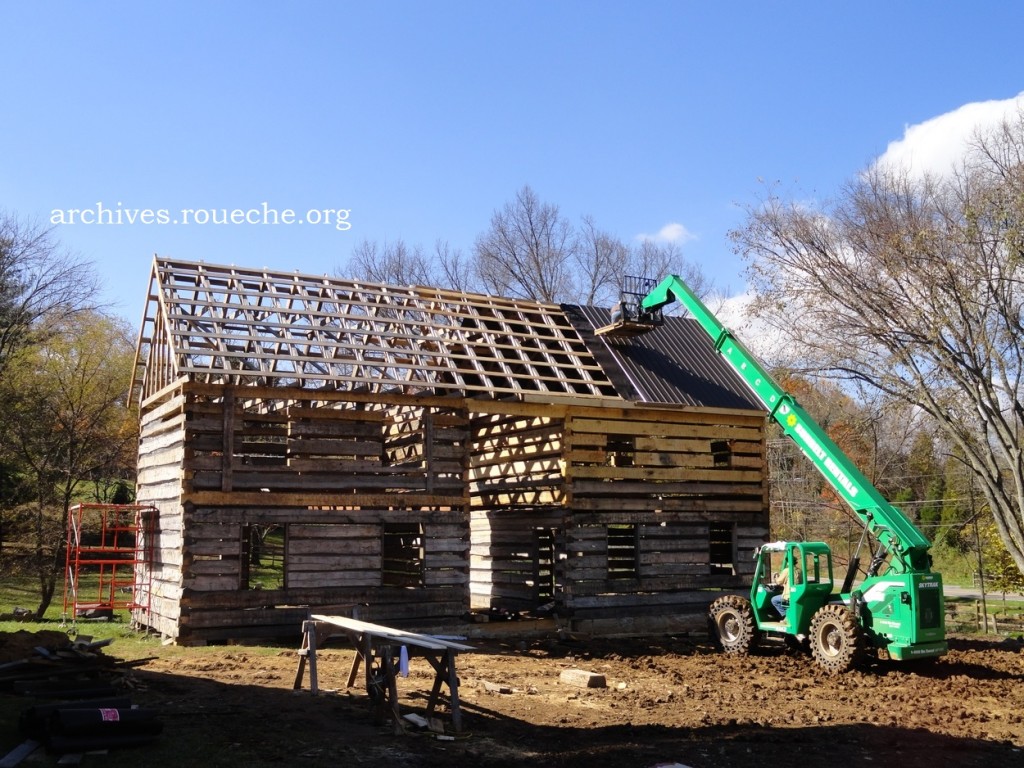 November 13 – The roof is complete and carpenters have begun placing the chinking between the logs of the dog trot. 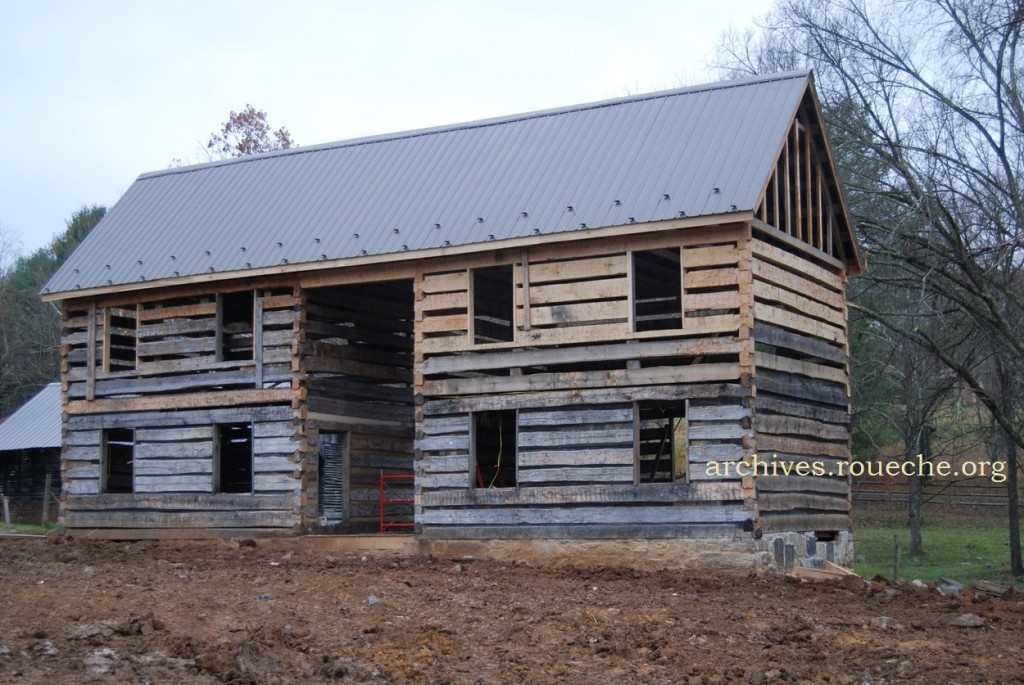 December 31 – The stone work is complete. 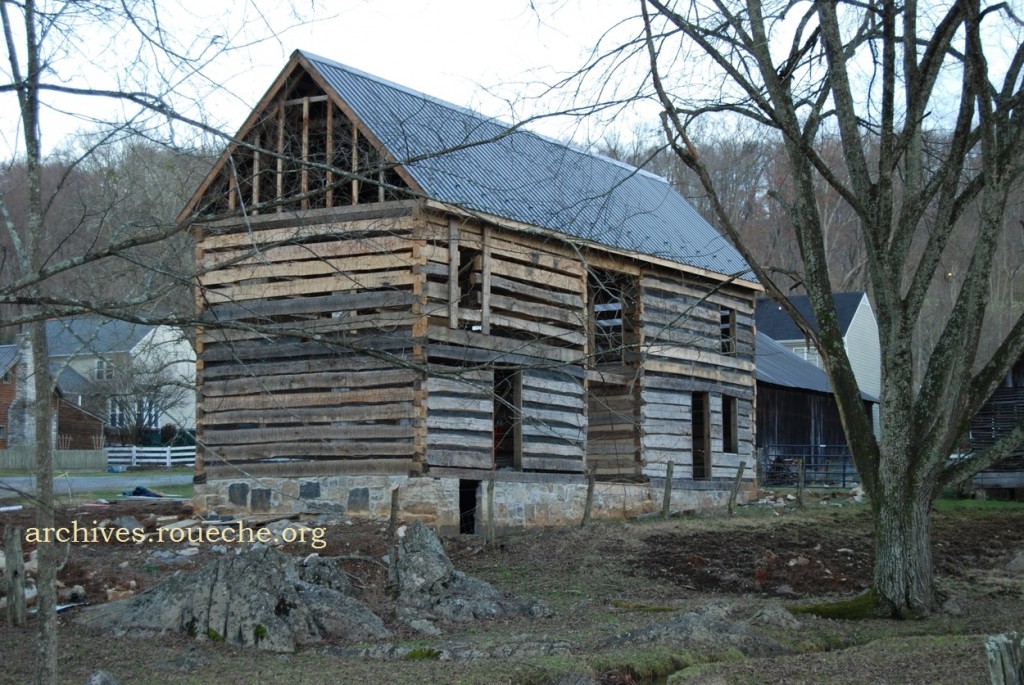 While the Association did elect to reconstruct a stone foundation, which was original to the home, the original stone fireplace will not be included in the project.

The gables, chinking, windows, and interior are still on the project list, but you can see that the cabin is beautifully made and situated and is a wonderful tribute to longtime Exchange Place volunteers Dick and Suzanne Burow. 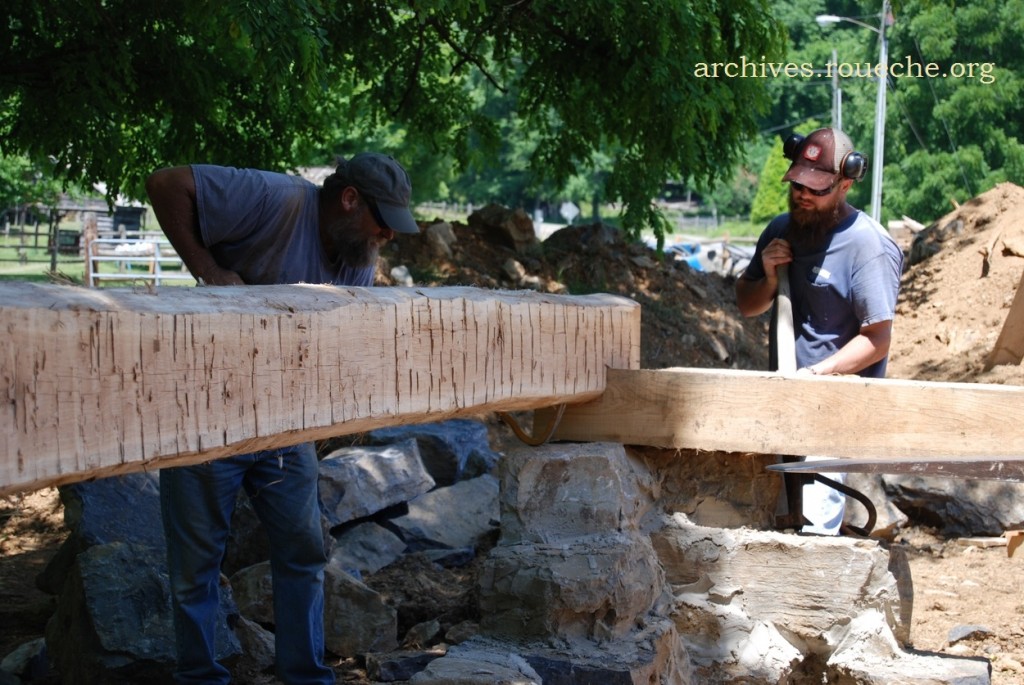