Last week a patron came to the Kingsport Archives to make an addition to the Mary Porter Collection. Ms. Porter’s parents were savers . . . and we are so glad. The collection consists of advertisements, mailers, brochures and other business communications from mid-20th century Kingsport. On this day, she brought in more gems for the collection and the archivist went through the items to identify those that pertained to Kingsport history. Ms. Porter set aside one piece that obviously did not, but I jumped all over it. When I told her I grew up less than half an hour from the location the brochure promoted, she offered it to me. The only thing that surpasses the mid-century marketing awesomeness of this brochure is my memory of the great times I have spent at Knott’s Berry Farm. From family trips, field trips, and outings with friends to the first time I took my little girl there, Knott’s has represented adventure, history, independence, and even romance. (Come on, the guys who help you onto the log flume are pretty cute.) 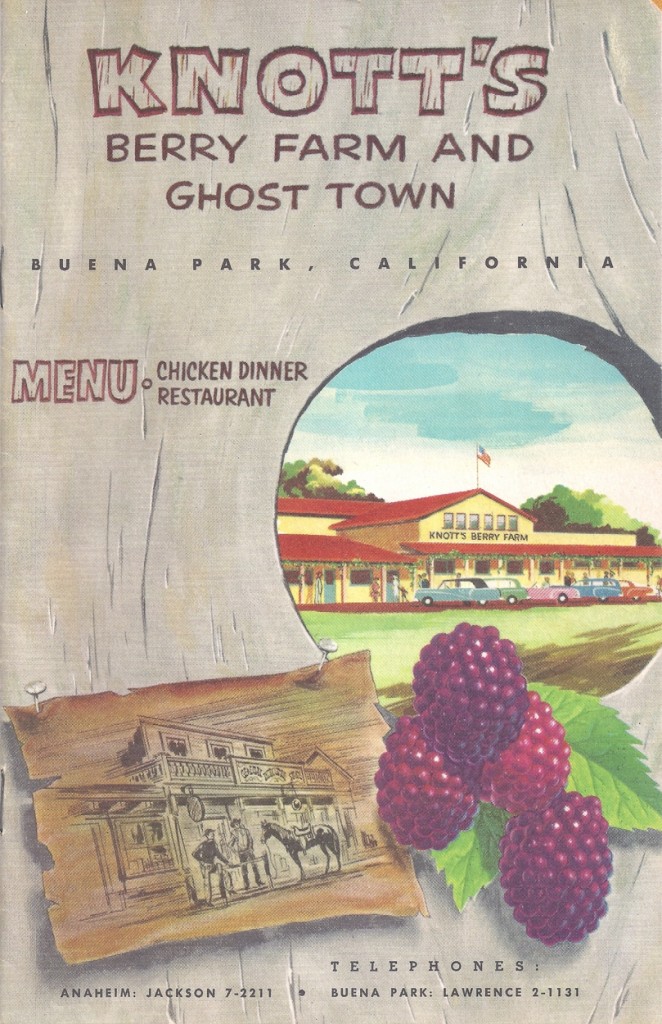 The Knott family moved to California in 1920 and began farming. They built a permanent building for their berry stand in 1928. 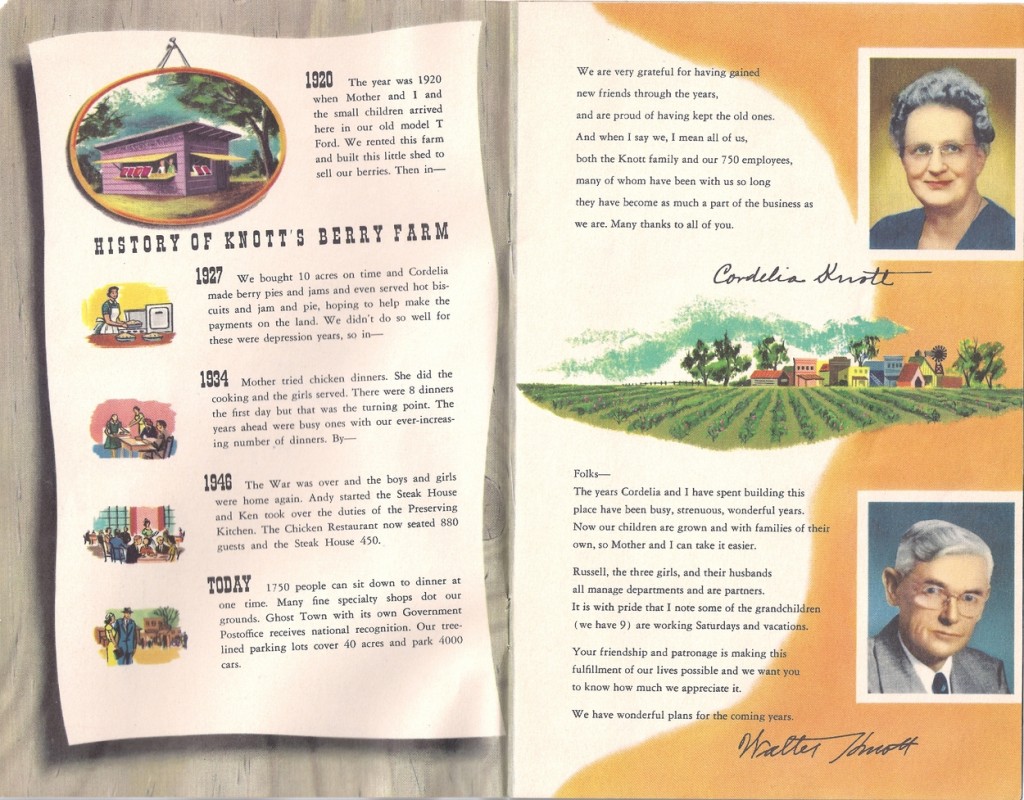 Walter and Cordelia survived the Depression Years and their business began to thrive.

When Mrs. Knott added chicken dinners to her endeavors, a restaurant was opened. 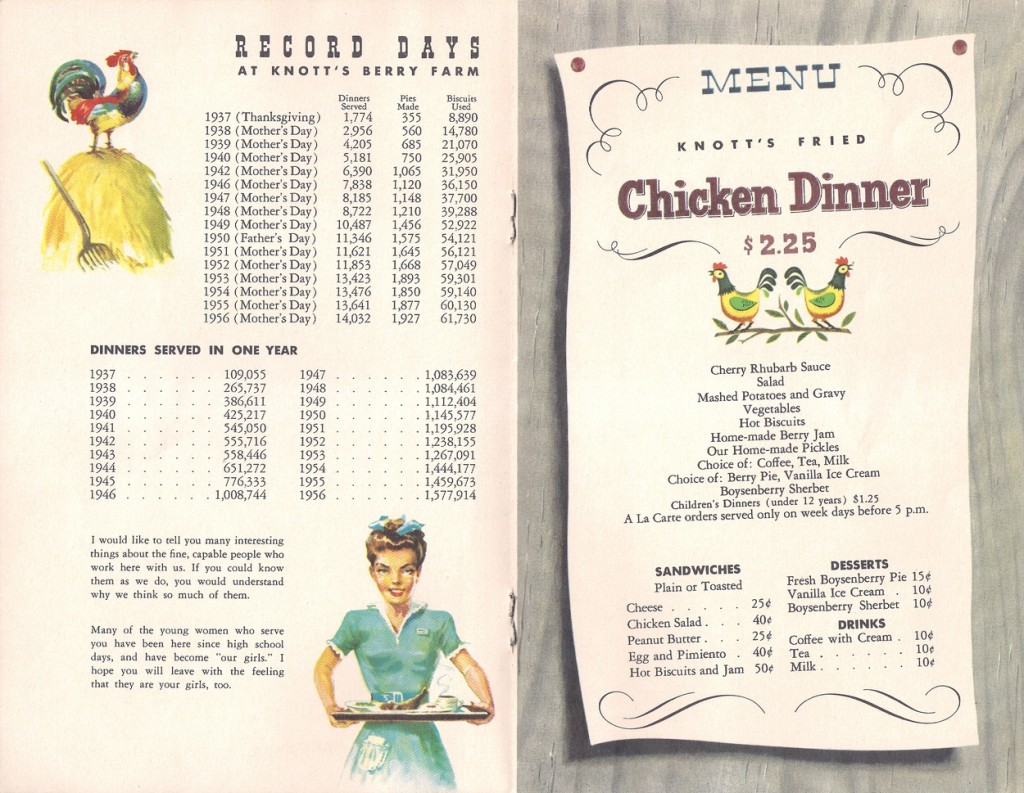 I personally can recommend the fresh berry jam and homemade biscuits. 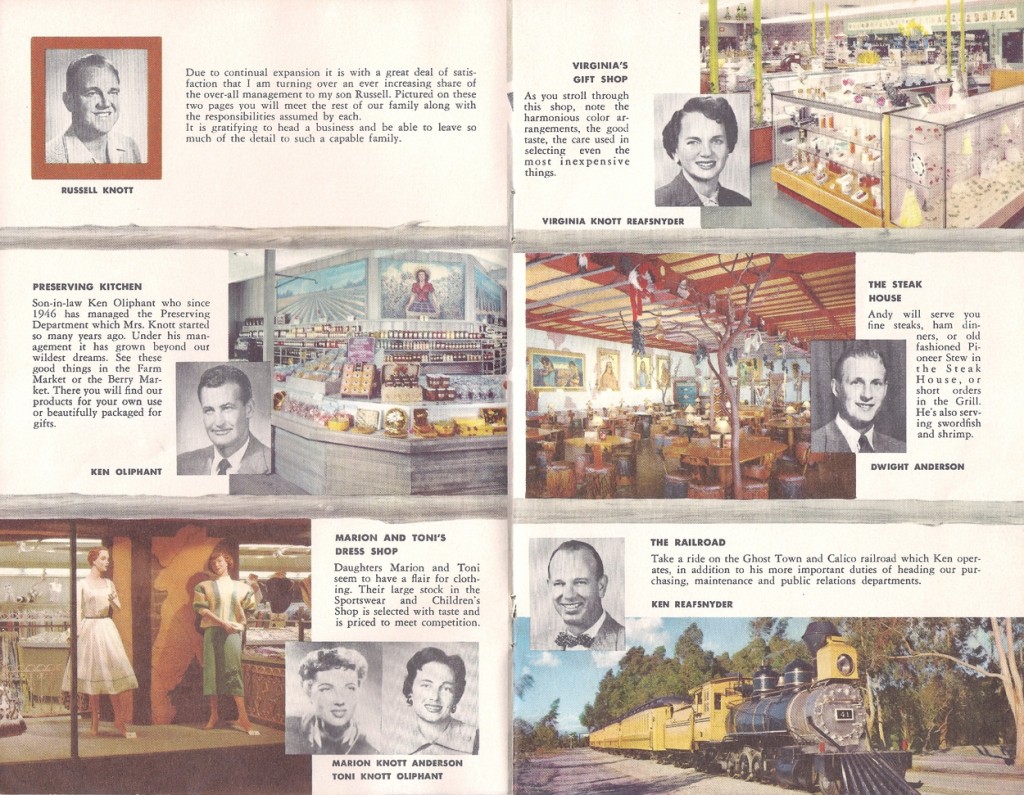 My daughter Anna’s first trip to Knott’s Berry Farm during a visit to her grandparents.’

The Knotts began salvaging buildings from the frontier west and bringing them to the farm for visitors to enjoy before their dinner. 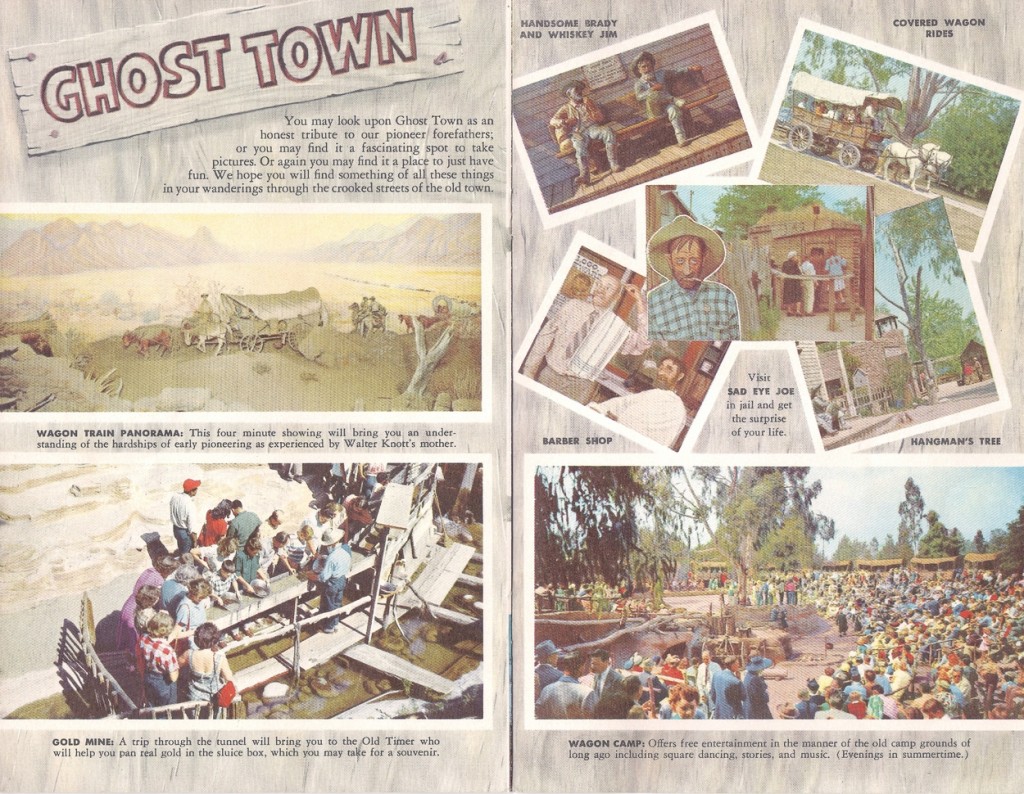 The Old West aspect of Knott’s was my favorite part of the park as a kid. 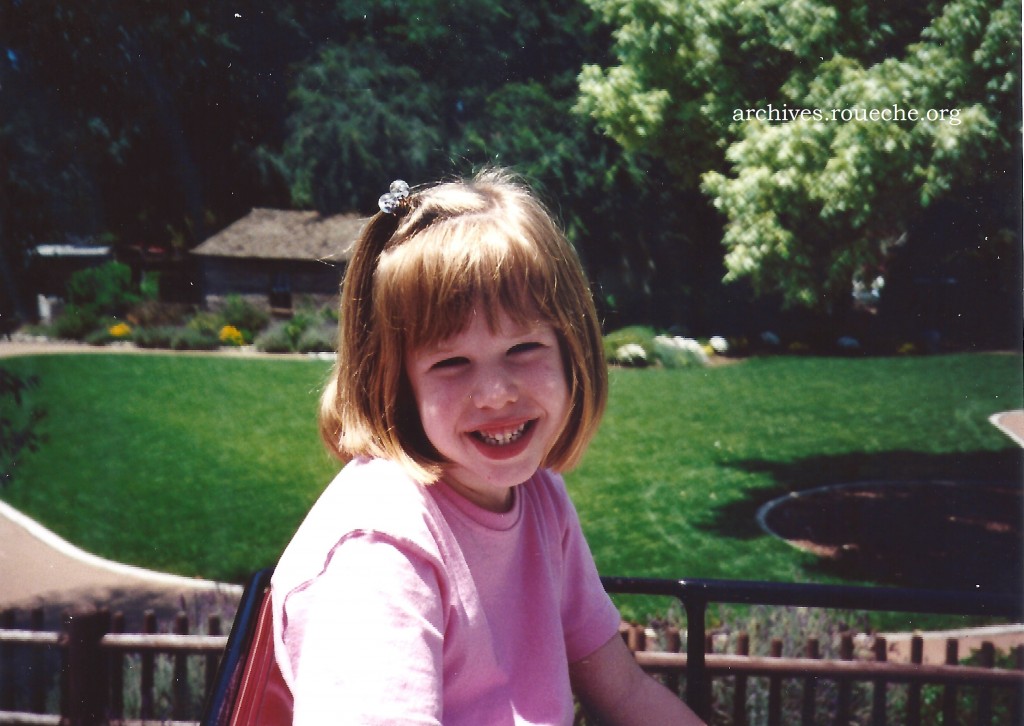 The Knotts tried to recreate the culture of silver mining in one area of the park, which they named “Calico” after an old mining town in San Bernardino, CA. They also invested in preserving the buildings of the real town of Calico. 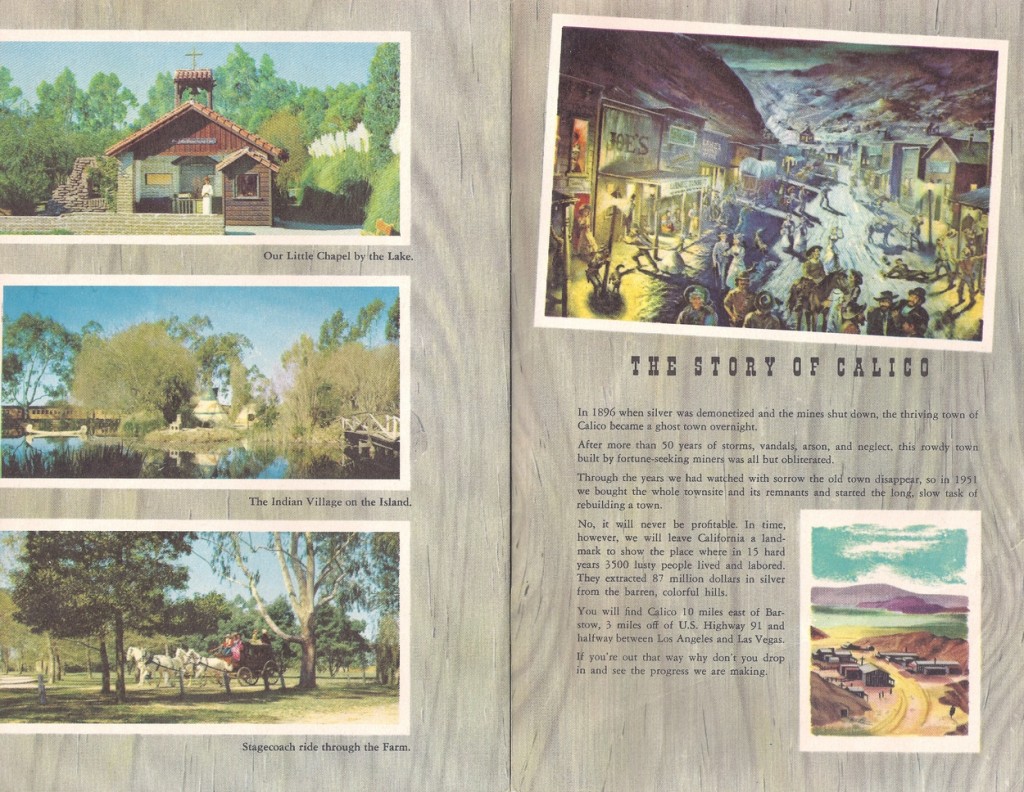 Calico, CA is a little mining town that the Knotts helped to preserve.

I love the map on the back. Hwy 39 is also called Beach Blvd. Keep going south on Beach and you will end up in Huntington Beach, CA. Sigh. I’m getting homesick. 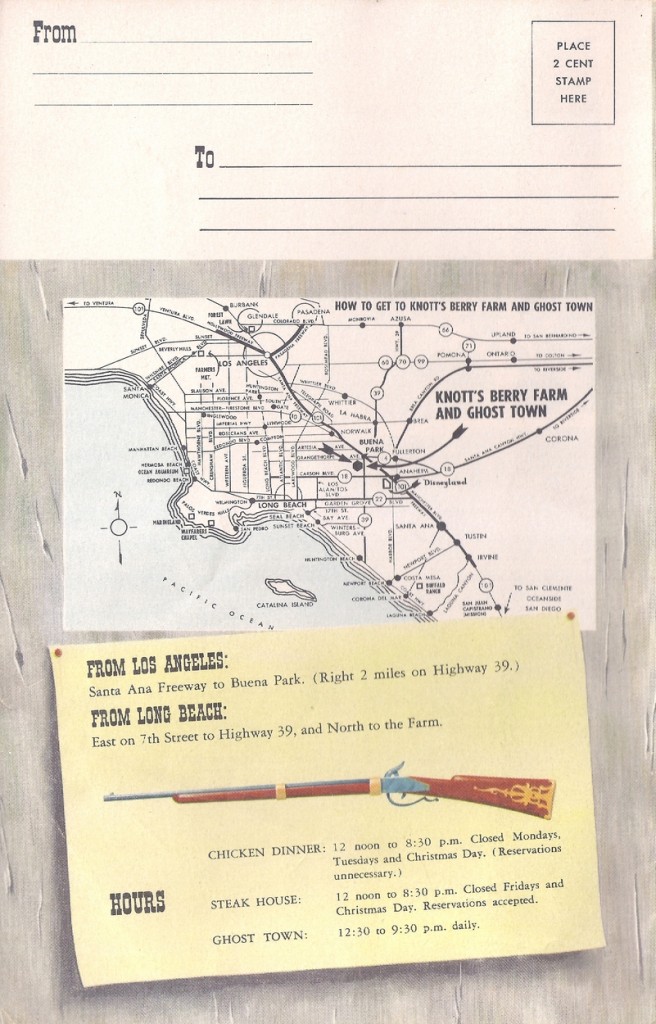 Notice the corner set aside for a “2-cent” stamp. 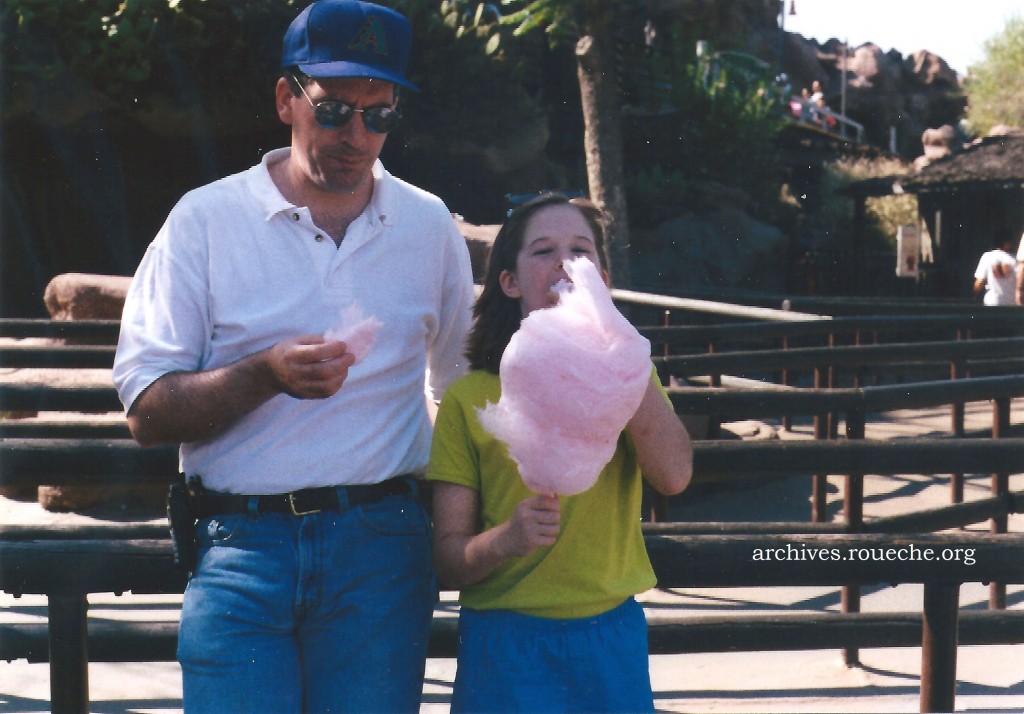 Peter and Anna enjoying cotton candy at the Park, 1997.

I love the advertising of the mid-20th century. It was colorful, creative, and appealed to a more innocent population. The Porters were wise to preserve the marketing materials of the past for the stories they tell and the memories they prompt.

This entry was posted in Archives and tagged Anna, California, marketing, restoration. Bookmark the permalink.