Genealogy: Putting it all together

I wrote about my maternal great-grandmother back here, but I’ve been thinking it was time to put something down on paper about my great-grandfather. I’ve been collecting links and scanning documents and photographs for a year or two to prepare for this effort.  I started by creating a timeline of all of the dates and facts I knew about him. Then, I added links and titles of photographs and documents to the timeline. The timeline can serve as a template for writing a simple history for Brigham Young Mansfield (1851-1924). Here is how the Word document looked when I was finished. (Please click on any of the photographs or documents that you wish to see more clearly.) 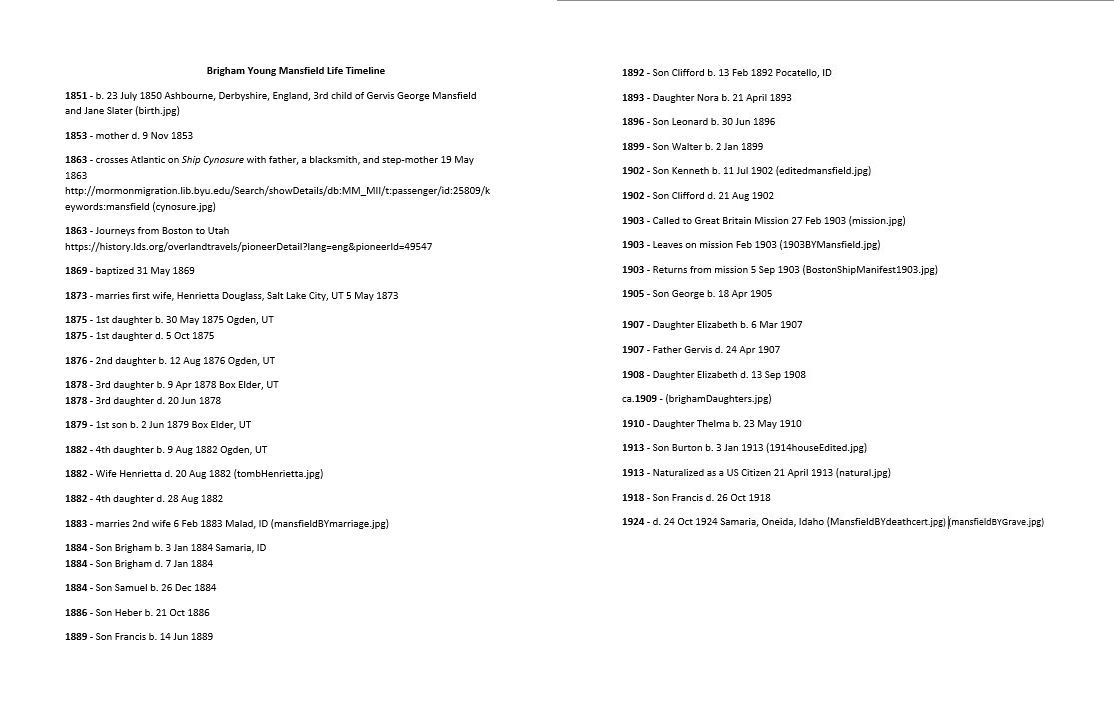 I can always make changes as new information comes to light, but as I learned when I wrote about my female ancestors, it’s important to just “Start with what you have!” Ready, go! 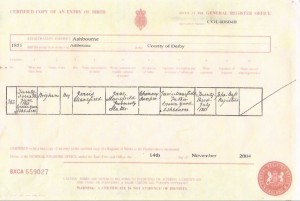 Mansfield became the third son born to Gervis George Mansfield and Jane Slater in Ashbourne, Derbyshire, England. The oldest son, Francis, was born in 1843 in Burton upon Trent, the hometown of his mother. The middle boy, William, who was born in Clifton in 1846, lived only one month. Father Gervis had been taught by Mormon missionaries and joined The Church of Jesus Christ of Latter-day Saints in 1849, hence the unusual name given his third son honoring the second president of the church.

On 2 October 1853, Brigham’s mother Jane died from a short illness (conflicting records state 1854). Brigham would have been just two years old. In November 1854, his father remarried to Jane Cromar. 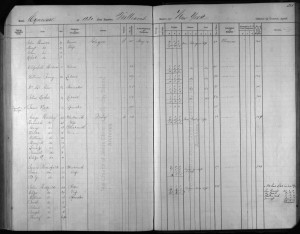 father and step-mother, boarded the Ship Cynosure in Liverpool, England, with George Q. Cannon acting as leasing agent, to join other Latter-day Saints in America. Francis, who by then was an adult, stayed behind in England. Though father Gervis, on various records, was identified by different occupations, such as boilermaker, policeman, and sweep, he listed himself as a blacksmith on the ship’s manifest.

Upon landing in New York 19 July 1863, the Mansfield family traveled overland to Utah and arrived before the winter of 1863/1864. They settled north of Salt Lake City in Box Elder County. There, on 31 May 1869, Brigham was baptized. 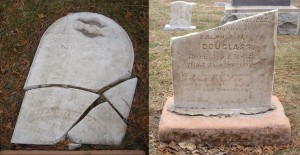 In 1873, Brigham married his first wife Henrietta Almeda Douglas, an American born woman of sixteen years, in Salt Lake City. The couple had five children. Their first daughter Helen was born in Ogden, Utah, in May of 1875 and died in October of that same year. Their second daughter Henrietta was born in August of 1876, also in Ogden. Daughter Jane was born in Box Elder, Utah, on 9 April 1878 and lived only until 20 June 1878. Back in Box Elder, Henrietta gave birth to a son, Gervis Bates, on 2 June 1879. Their last child, Minnie Alvira, was born 9 August 1882. Henrietta passed away just eleven days later and little Minnie died on her nineteenth day.

Brigham’s father was part of a Latter-day Saint settlement in the Malad Valley of Idaho, where many Welsh Saints had gathered. There, Brigham met a young Elizabeth Ann Williams, who had also crossed the Atlantic with her parents and other church members, under the leasing authority of Franklin D. Richards, on the Ship John Bright.

The couple married in Malad on 6 February 1883. 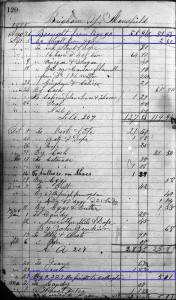 In addition to farming, Brigham drove a freight wagon to earn a living. He made frequent runs between Idaho and towns such as Ogden and Collinston, Utah. Store ledgers of the Samaria Ward Cooperative record various transactions for the family, from exchanging loads of freight for pantry goods, to bartering butter and eggs from the couple’s farm for clothing and even candy.

Elizabeth, in addition to raising Brigham’s two surviving children, would go on to have thirteen children of her own. Son Brigham was born 3 January 1884. He lived just four days. Samuel was born at the end of that year on December 26. Heber was born 21 October 1886. Before their next son Francis, named for Brigham’s brother back in England, would be born on 14 June 1889, Brigham said goodbye to his step-mother of thirty-seven years when Jane Cromer Mansfield passed on 6 August 1888 in Box Elder.

In February 1892, Elizabeth gave birth to a son Clifford in Pocatello, Idaho, but daughter Nora was born the following year, 21 April 1893, back home in Samaria. Son Leonard joined the family on 30 June 1896. Walter was born next on 2 January 1899. 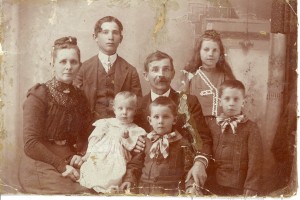 In 1902, Elizabeth gave birth to another baby boy, Kenneth, on 11 July. The family would mark this occasion by sitting for a portrait, a fortunate thing since Brigham would leave for England the following year. One month after Kenneth’s birth, Clifford passed away on 21 August at the age of ten. 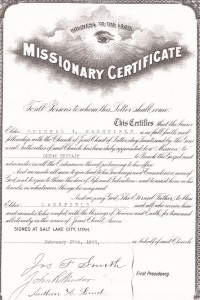 Brigham Young Mansfield was called to serve a mission for The Church of Jesus Christ of Latter-day Saints to his homeland on 27 February 1903. He recorded his travel, service, correspondence, poetry and thoughts in a small journal he purchased from “Albert E. Heazell Bookseller, Stationer, Etc.,” 66 London Rd., Liverpool. Page 1 begins,

Samaria, Idaho Feb 24th 1903 – Well I do not know where to begin. This is the hardest day’s work I ever done in my life. I did not know how I could leave my wife and children. My heart is too full for words. I can not express my feeling. To think I must tear myself away from those that are dearer than life. Never will I forget that parting. I leave a loving wife and children. What for? For the sake of the Gospel. Will go and do the best I can leaving all that I have on this earth in hand of God who gave them to me.

Brigham’s mission was cut short due to illness.

He described back pain with some frequency. It was severe enough to keep him from leaving the house on many days, though he always found things he could do while resting it, such as writing letters or preparing tracts. On 23 May 1903, he wrote that he had sent his wife one of the pictures he had made, of which he purchased one dozen (see portrait to the right). Brigham lived and served in the very towns where he grew up and from where Mansfields originated and still lived. He sought out and taught relatives whenever possible. 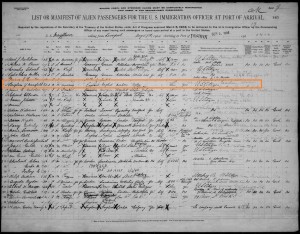 He came back to America aboard the SS Mayflower, arriving in Boston in August 1903 and taking a train back to Utah. His final entry is  7 September 1903 in which he described crossing over the Mississippi and Missouri rivers and losing his satchel at a station in Colorado. 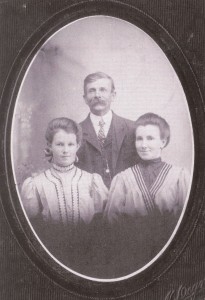 Upon returning from his mission, Brigham resumed duties on his farm and ranch. The Mansfields had creek side property in Samaria as well as grazing land outside of town. Four more children were born to the couple post-mission. A son George was born 18 August 1905. A little girl, Elizabeth, was born 6 March 1907. The following month, on 24 April 1907, Brigham’s father Gervis died at the age of 77. On 13 September 1908, daughter Elizabeth died at eighteen months old.

On 23 May 1910, Elizabeth and Brigham welcomed my grandmother, daughter Thelma, into their home. Nearly three years later, Elizabeth would give birth to her last child, Burton Williams, on 3 January 1913.

At the age of 62 and after living in American 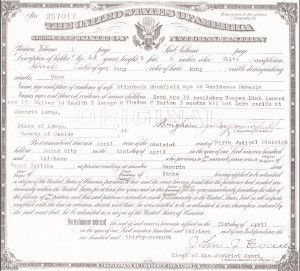 territories and then the State of Idaho for 49 years, Brigham would be naturalized as a United States citizen on 21 April 1913. The certificate describes Brigham as being 5’5″ tall and having gray eyes and gray hair. It also describes the location of his minor children, starting with Nora, 19, living in Hooper, Utah; and Leonard, 16, Walter 14, Kenneth 9, George 8, Thelma, 2,  and Burton, 3 months; all living at home in Samaria. 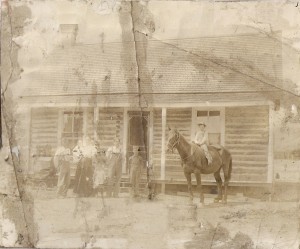 That same year, 1913, the family posed for another portrait. This one in front of the family home in Samaria. The youngest child, Burton, is in Elizabeth’s arms, my grandmother stands to the right of her, and son George is on the horse. Brigham, all 5’5″ of him, stands to the left of his wife. On 26 October 1918, the Mansfields’ adult son Francis died at age 29. 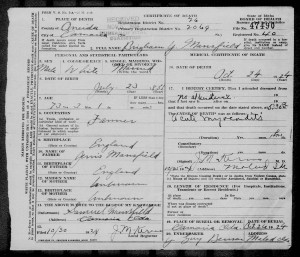 In the 1910 and 1920 censuses, Brigham no longer listed himself as a farmer, but as a laborer of ‘odd jobs.’ On 24 October 1924, Brigham Young Mansfield died suddenly of a heart attack at age 73. After long journeys, sacrifice and heartache, numerous joys, and much hard work his labors were complete. His wife Elizabeth would finish raising their youngest children, Thelma age 13, and Burt age 11, who were still at home and would become very close. Elizabeth never remarried and died twenty-five years after her husband.

Hopefully, this post demonstrates what is possible when you want to write an ancestral narrative and you do not have much in the way of interviews, personal accounts, correspondence, etc. Start by illustrating a time line of your ancestor’s life with the pictures and documents you can find and the words will come, eventually. Of course, there is always more that you can do, but putting off the effort of writing family history until you have “everything,” means that it will all  be forgotten before it ever gets done!

Even I can do more. I can incorporate the research of others who have uploaded stories to FamilySearch and Ancestry. I can study the census and archival church records more carefully for dates and addresses and use Google Earth to document locations. I can certainly add local and political history as it pertains to Brigham’s life. But, this timeline has helped me put together what I have, right now, and doing so has taught me so much about my ancestor in the process.

One Response to Genealogy: Putting it all together