For this post I was inspired by two things, Women’s History Month and a blog post by archivist Melissa Mannon. I asked myself, what have I done lately to remember the histories of the women in my line who have gone before me? In Melissa’s post, she shares her collection of “orphan” photographs. These are portraits that are no longer connected to an album or written narrative. She collects vintage pictures of women doing ordinary things as a way of preserving history. Here is the idea that came to me after reading her article. 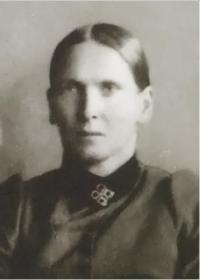 Elizabeth Powell was born to Mary Powell on May 1,
1845, in Llandilor’fan, Breconshire, Wales. She was raised in the home of her grandparents John and Elizabeth Powell. John was a farmer. Elizabeth married Samuel Daniel  Williams on November 25, 1866. Samuel, a widower, had four children already. Elizabeth gave birth to a daughter, Elizabeth Ann, before the family sailed for America. Samuel, Elizabeth, baby Elizabeth, and three of Samuel’s children, Mary, Ruth, and Samuel (Daniel stayed behind with his maternal grandparents) boarded the Ship John Bright on June 4, 1868 in Liverpool. The family arrived in New York on July 14, 1868. From there, they traveled by train to Laramie, Wyoming, where they were met by “boys from Utah” who lead them to Salt Lake City by mule-drawn wagons. 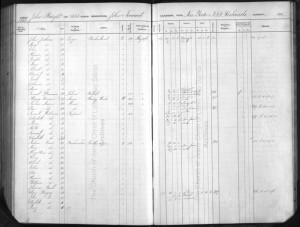 1868 manifest page from the John Bright.

Even the modern railroad did not remove all of the hardships from the  journey west. Samuel contracted measles enroute and Elizabeth was stricken with  mountain fever. Arriving in Salt Lake on August 24, they camped for one week in the tithing yard before settling in Brigham City for a year. The Williams’ moved to Malad, Idaho for a short time before settling in Samaria, Idaho. Elizabeth eventually gave birth to ten more children; six girls and five boys, in total. She died in Samaria on October 22, 1902, at age 57, just two years after her husband, when her youngest child was sixteen years old. 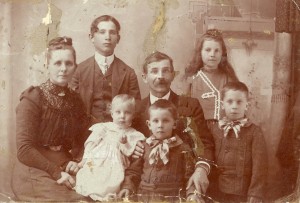 Elizabeth Ann Williams was born on March 22, 1867 in Llandilor’fan,
Breconshire, Wales. She was just fifteen months old when she made the voyage with her parents and half siblings to America. Growing up in Samaria, Idaho, Elizabeth used to keep house and tend children to make money. Also, twice a week she would walk to the neighboring
community of Gwenford to do laundry. It was during one of her three-mile walks
to and from her washing job that she was offered a ride by a man hauling freight by wagon. Within a year, Elizabeth married this man, widower Brigham Young Mansfield, on February 6, 1883. The newlyweds and Brigham’s two surviving children first leased a farm in Samaria. Elizabeth would give birth to thirteen children. She became proficient at assisting other women in childbirth, as well, and was known for her charitable ways, generosity, work ethic, and nursing skills.

Her granddaughter Larene (Nora Mansfield’s daughter) recalled loving to visit Grandma’s house because they were allowed to go barefoot, that Elizabeth generously fed everyone who came to the house to visit, that she “milked cows to make a living,” and that everyone, relative or not, called Elizabeth ‘Aunt Lizzie.’ Larene also recalled that Elizabeth would give the kids “one or two eggs so we could take it to the store and exchange it for candy.”  Elizabeth’s daughter Thelma wrote “My mother . . . loved stories of all kinds. She always danced and sang at town functions, along with her  younger brother Oliver.” She remembers her mother would make turning the hand crank on laundry day less tedious when “my mother and I would sing church hymns to keep time with the washer.”  Elizabeth was very industrious. She milked the cows on their Samaria ranch and also raised chickens. She would barter her eggs, milk, and butter at the co-op and with neighbors to acquire other goods and services for her family. In addition to the Samaria home and ranch, the family also had a homestead  “30-40 miles” from Samaria in Ireland Canyon. 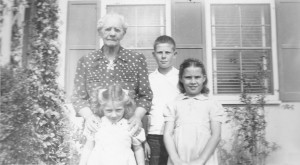 Elizabeth served faithfully for many years in the women’s organization of her church in leadership roles and also as a hard worker on service days making quilts and helping others. In May of 1920 she became 2nd counselor in the Samaria Relief Society presidency. In July of 1921 she became 1st counselor and continued as such until the end of 1928. The minutes of the organization’s meetings often record Elizabeth conducting, bearing her testimony, or organizing service activities. Elizabeth’s husband died in 1924 when her youngest was only 11 years old. In her later years, Elizabeth was less tied to the land and able to travel to visit her grown children and to work in the Salt Lake City Temple.  She lived until age 77 and passed on April 18, 1949. 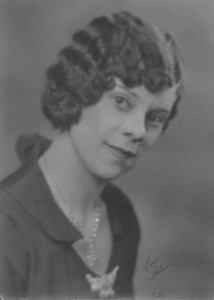 Thelma Mansfield was born in Samaria, Idaho, on
May 23, 1910, to Mormon Pioneers Brigham and Elizabeth Mansfield. She was the second youngest in a large family and very close to her youngest brother
Burton. Because of the difficult economy in tiny Samaria, she not only did her share of chores around the home growing up, but often did other jobs for pay on
neighboring farms. Thelma, however, wrote in her journal that as long as her father was living, her childhood was happy. (He died when she was just fourteen.) Some of her fondest memories include sleigh rides and ice skating on the frozen canal or roads in the winters and Sunday dinners followed by hide and seek and playing in the yard on homemade swings and teeter totters in the summers.

After 8th grade graduation, Thelma went to Preston, Idaho to live and work for her half sister Henrietta Mansfield Dives, who ran a 30-room hotel, so she could attend high school. She returned to Malad for her junior year and then finished up her senior year in Preston, working several jobs to pay her room, board, and school expenses. Her ability to work hard, combined with self-discipline and all of the homemaking and creative skills she learned as a child served her well her entire life. After high school she got a job she enjoyed working for an optometrist in Pocatello. She went to business school two nights a week and worked during the days. She met Eldred Price Armstrong and they married in Salt Lake City on March 3, 1931. Price worked as a bus driver or truck driver for most of their marriage. He was transferred back and forth between Idaho and California. During this time Thelma gave birth to her first child, Price LaMoyne in 1932, and to Bar Dee Thelma in 1936. 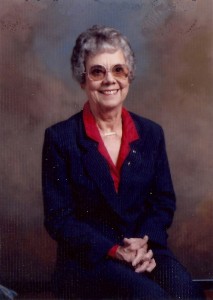 The family eventually established a home in Rosemead, California, where Thelma’s children graduated from high school. She worked for many years for Montgomery Ward. A couple of years after her divorce in 1959, she married longtime friend and neighbor Max Robert Ebert. When the couple retired, they moved to a beautiful, small town called La Pine, Oregon. Their home was a place where her six grandkids loved to visit, making tree houses in the summers and snowmen in the winters. Max’s death left her a widow in 1979, but this did not keep her from loading up her car and driving all the way to Southern California to visit her grown children, or to Utah to visit extended family. Thelma, nicknamed Patsy, quilted, sewed clothing, painted, and crocheted as long as her fingers and eyesight allowed her to. She was generous with her talents and always tried to please her loved ones by crafting items that were both useful and beautiful. She faithfully researched her family history during a time when that could only be accomplished through letter writing. She was independent to the very end of her life, visiting friends, running errands, and only employing a bit of housekeeping help. She died peacefully on August 15, 2001, after a summer filled with visiting family members and attendance at a family reunion.

(“The Journal of Thelma Mansfield Armstrong Ebert;” personal memories of the author; familysearch.com) 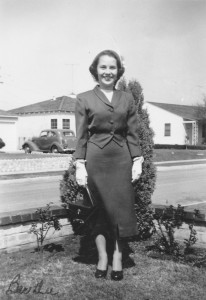 Bar Dee Thelma Armstrong was born in Malad, Idaho on January 26. When her mother was six months pregnant with Bar Dee, she started to have premature labor. Her mother writes that old Dr. Stone “came to the apartment, put me to bed, and stayed for eleven hours until he was sure I was O.K.” Amazingly, the doctor made meals for himself and for Bar Dee’s toddling brother, La Moyne. (Bar Dee’s father had recently been transferred to California.) Come winter, she was safely delivered and at one month old, she was bundled up along with her brother by her mother onto a train for California.

Bar Dee was a member of the first graduating class to attend all four years at the new Rosemead High School. She went to work for Time Trucking Co. where she met Donald Neil Gillis. The couple was married in 1958 and bought a new tract home in Whittier, California. They had three children together, Kirk, Kent, and Kari. Bar Dee was as industrious as the women who came before her. She learned to paint and plaster as well as she could sew and bake. She worked hard at an Avon route for six years. She used her cottage business as an 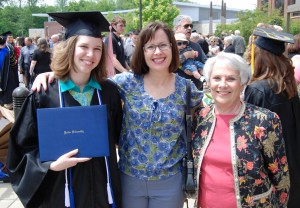 Granddaughter Anna on the day of her college graduation, daughter Kari, Bar Dee

opportunity to teach her children how to make change, to speak to customers at the door, and to follow address directions from a bicycle. She was always looking for teaching moments. Bar Dee was the most beautiful mom at Grovedale Elementary School, where her children attended, and she volunteered in the local scouting program. Desiring a greater challenge in life now that her children were nearly grown, she attended night school and passed her real estate exam. She had a very successful career for thirty-two years before retiring. She and her husband have re-settled in southern Washington State where they welcome visitors throughout the year to their charming home.

This was my first attempt at writing an ancestral narrative. Of course, I need to do more research, interview more people, and compile more sources but what I have learned from this experience is that it is important to just start. Also, every time I read through my genealogy materials, I learn something and seem to be able to put more pieces of the puzzle together.