Well, my Archival Diet is over. I finished processing the collection, today. It ended up being 24 boxes and 2 oversized folders. To mark the amazing milestone, I had my friend take my picture out in front of the CHL. 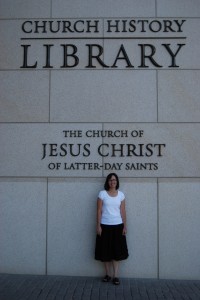 Me, absolutely amazed that I got this collection processed in two weeks.

As I was finishing up the last series, I discovered this 19th c lace pattern tucked in with some correspondence. 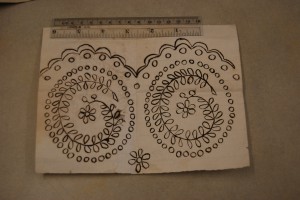 Here are a few favorites from among the Photograph series. I wish I could include twenty more! Hugh B. Brown took officer training in the Canadian Army in 1912. In 1914, he helped form a mounted squadron. He later traveled to England to fight in WWI. 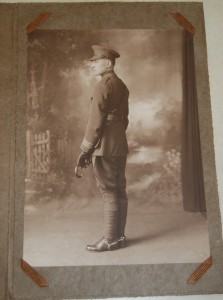 Once in Great Britain, Major Brown had his own “batman,” Arthur Perry, who proved to be a trusted and loyal aide. Here is Perry dressed to the nines. He signed this portrait personally. 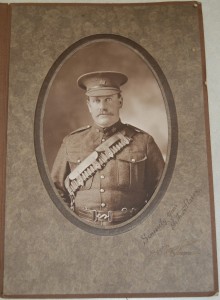 I began reading the research on Hugh B.’s life that I had gathered earlier and writing a biography for the finding aid. I’ll finish that up on Monday and begin the Excel box and folder inventory. I returned Katie’s micropatula, this afternoon, since I am finished using it. Boo hoo.