Today was a special day. John Scott of the Netherland Inn Association (NIA) gave me a personal tour of the newly reconstructed Bank Barn. As far as we know, the bank barn was on the Netherland Inn premises until about 1920. After the NIA purchased the property in 1967, they obtained a grant for an archaeological survey in 1973. This revealed the foundations and footings of many of the outbuildings and also uncovered numerous artifacts that are on display, today. A second archaeological dig was executed in 2003 in preparation for the reconstruction of the original Bank Barn which was an essential element to the Inn’s history as a stage coach stop.

The barn has three floors. The ground floor can be entered from Netherland Inn Rd. and is where coachmen and guests would enter with their horses. 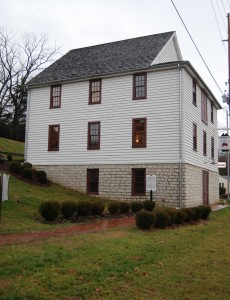 The second floor is entered from the hill and is where drivers could bring their coaches for repair or for storing overnight. 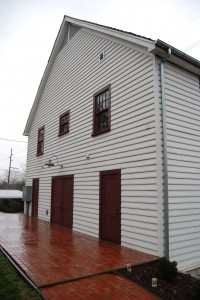 We entered on the second floor. This is where John and several other Association members are currently sorting through artifacts and organizing displays for the museum. 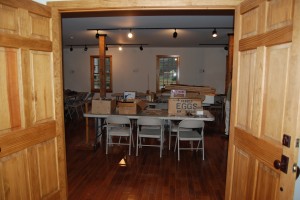 This floor also houses two restrooms and storage. My favorite thing, so far, is the diorama of the Boat Yard. This was made years ago by Hal Spoden and another gentleman or two, however, it has been stashed in the house out of sight. It is awesome. 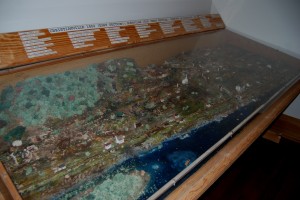 I know the picture does not do it justice, but you must go see this once the museum opens. Every structure has a tiny number on it and each number coincides with a note card explaining its history. 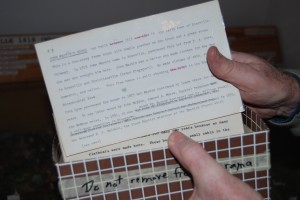 John and I found all kinds of things under the glass, including his houses on the Greenbelt. I seriously want this thing in my living room. We even found the ancient sink hole that will be the subject of an upcoming blog post. 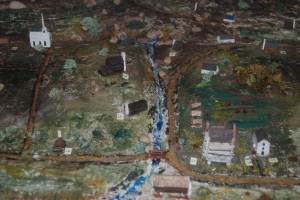 The ground floor is fitted out with several antique wagons. This room is beautiful. 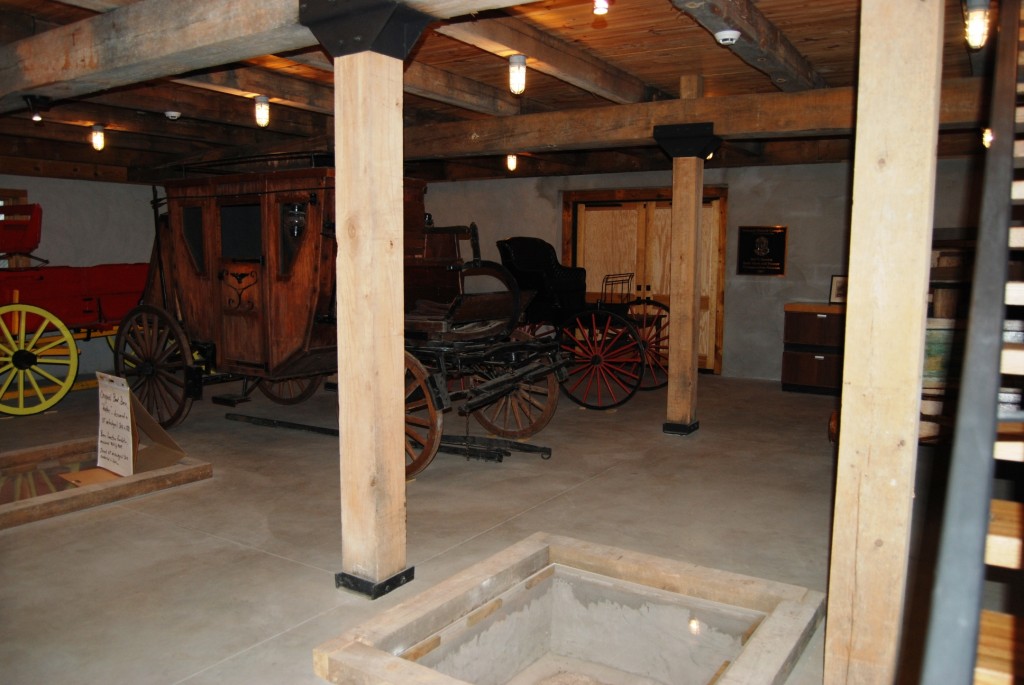 Two of the original footings uncovered in the dig have been preserved under Plexiglas. 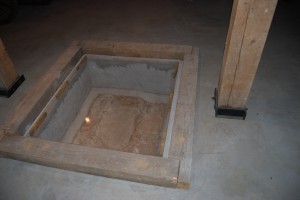 The barn is 40’x40′. They placed the new footings slightly off center so as not to disturb what the archaeologists uncovered. 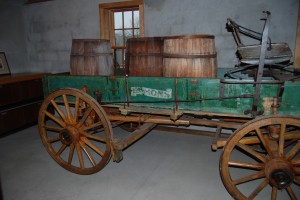 You may have seen one of these wagons, before. The Lamon company was located in Greeneville, TN. There is a black buggy in the center of the barn with a neat story. A lady who lived in the Eden’s Ridge area used to drive it to Kingsport (Christianville) everyday. 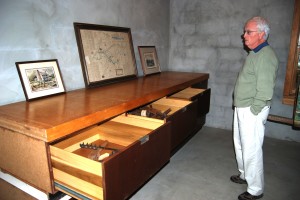 In these display bins, there is an awesome collection of carpentry tools and some amazing and unique planes, specifically. Above, you see Muriel Spoden’s Historic Map of the Long Island of the Holston. If you want to see a version of this map that is six times this size, come visit us in the Archives of the City of Kingsport. We refer to the one in our display lobby all of the time! 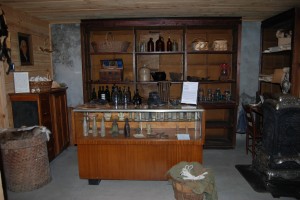 In the opposite corner of the barn, the NIA are recreating the Hale Store sales counter. They have taken the inventory of one month of the store’s ledger and are amassing all of the items sold during that month. 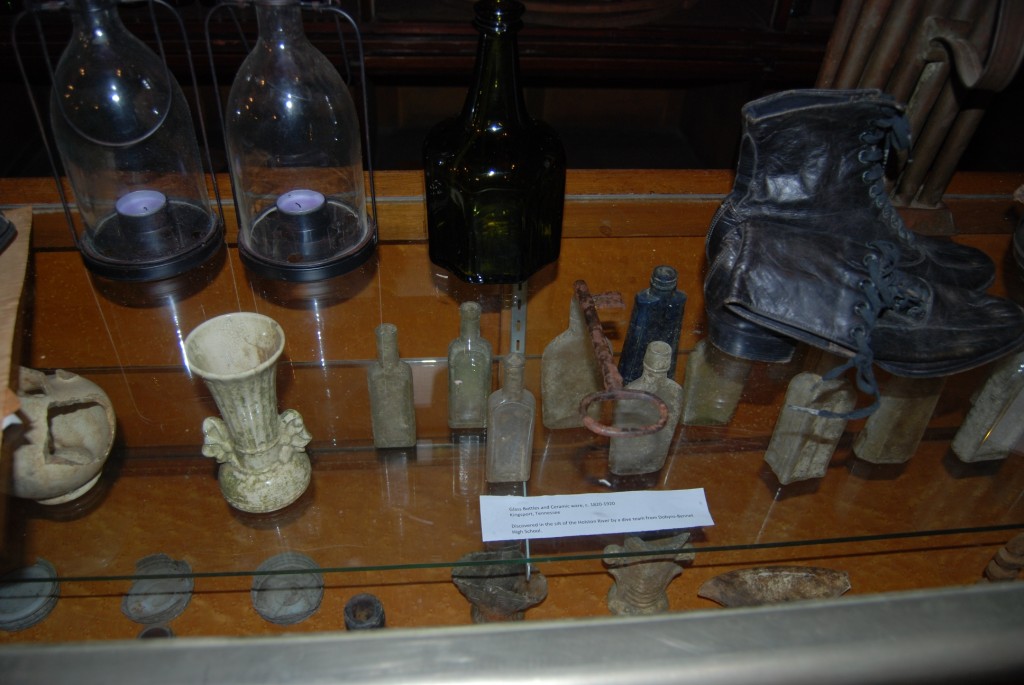 A local scuba club organized a dive in the South Fork of the Holston River, just in front of the Inn, and recovered nearly all of the items you see in this case.

Next, we went to the third floor. This space has been used for functions and a quilt exhibit, but in the future, it will be the home of an interactive museum for children. 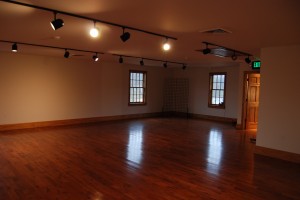 There is also an office and room for a future reference library and archive. 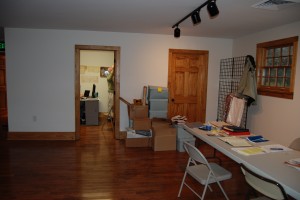 Oh dear, right now the archive consists of stacks of record center boxes. Is there an archivist in the house? One thing the third floor definitely has is amazing views! 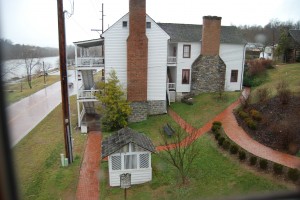 I guess I only took one angle because I don’t want to spoil it for you when you visit the Bank Barn on your own archiventure. Below is one last shot of the barn that I took while standing in the breezeway of the Inn. I can’t wait until the public gets to see all of the hard work that has gone into this historic reconstruction. Thanks for the tour, John! Call me if you need my help. 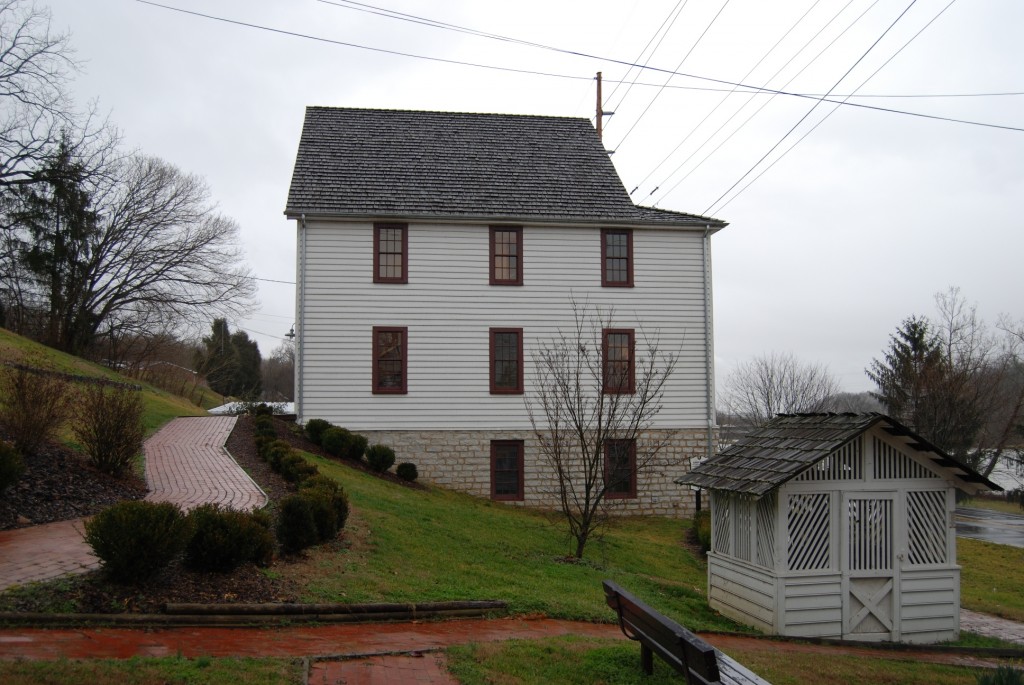