Posted on January 4, 2013 by Kari
Happy New Year! I just checked and I haven’t blogged since November 17, 2012. The defense of my research before my committee was November 29 and commencement was December 15.  I needed a break after all of that. More importantly, I had an overwhelming desire to do all of the things that I had put off for 2.5 years!
The defense was a grueling one and a half hours long, but not as grueling as the week prior during which the committee chairman blasted every aspect of my paper! I discovered that there are three keys to a strong defense. 1. Preparation 2. Preparation 3. Preparation. Wait, there are four keys. The fourth key is prayer. A lot of it. That was the only way I was able to remain calm and think straight. The good news is I passed on the spot without any further instructions. 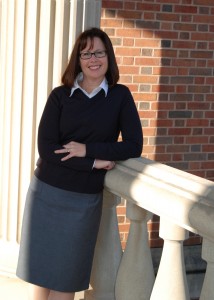 This picture was taken at ETSU two days after my defense and used for my graduation announcement.

If you’ll recall, my paper was entitled “Tell me who I am”: Finding Personal Identity and Connections to History Through Genealogical Research. The thing I am most pleased about with my research was that I got to interview two of my sources. John F. Baker, Jr. is the author of The Washingtons of Wessyngton Plantation. I first met Mr. Baker when he spoke at the Society of Tennessee Archivists 2011 annual conference. This was before I had decided upon the exact direction of my research. I bought his book, read it, and plastered it with sticky notes. When the idea came to me last summer to interview him, he graciously agreed. He was FANTASTIC and I am so lucky. If I hadn’t gotten a scholarship to attend the conference, I never would have met John Baker.

The other interview I conducted was with Brittany A Chapman. Brittany was my mentor for the second week of my June 2012 practicum at the  Church History Library in SLC. I asked her for a copy of her Master’s Thesis, which was centered on the life of her great-great-grandmother who was a Mormon Pioneer from England and a suffragette. I used the thesis as one of my sources and also interviewed Brittany. Her feelings about personal identity and connecting to an ancestor’s life, time, and achievements were critical to my paper. If I hadn’t performed my practicum at the CHL, I never would have met Brittany.

I was not able to interview Muriel C. Spoden, the creator of the collection I have been working on for 18 months, since she died in 1999; however, my goal was to read as much of the collection and her family history narratives as possible so that I could make Muriel come to life through my paper. I found all kinds of comments she made in letters, margin notes, and in the introductions to her books that expressed her feelings about the benefits of performing genealogical research and getting to know one’s ancestors. If I hadn’t been volunteering at the City of Kingsport Archives, I would never have been exposed to Muriel Spoden’s work or based my Capstone Project on her.
For those of you interested in the character of my research, I am including my bibliography below.

Chapman, Brittany A. “Ruth May Fox: Portrait of a Nineteenth Century Woman in Historical Context.” Master’s thesis, University of Leicester, 2007.

Gates, Henry Louis, Jr. In Search of Our Roots: How 19 Extraordinary African Americans Reclaimed their Past. New York: Crown Publishers, 2009.

Limerick, Patricia Nelson. The Legacy of Conquest: The Unbroken Past of the American West. New York: W. W. Norton & Co., 1987.

This entry was posted in Capstone and tagged genealogy, research. Bookmark the permalink.