Interesting title up there, right? It means I have completed the finding aid for the Brown Family Papers! Today, Jay Burton, whom you’ve seen in a picture of the weekly Intake and Cataloging process, looked over my Box and Folder Inventory and also my Scope and Content notes, made some suggestions, and said, “This is good work, Kari.” It was pretty exciting. He will make sure that someone enters the inventory, bibliographic entry, scope and content notes, and the biography into a MaRC listing. Alas, I have completed my project and I am already starting to miss the Brown Family.

After I made all of Jay’s suggested changes, I gave a tour to two visitors. Peter Roueche and Kathleen Fueston. Kathy works across the street in the Church Office Building but we grew up together in California. 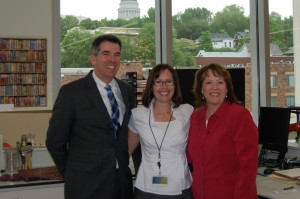 Our tour took us to the Conservation Lab

I also took them to see the best view in the city. The corner office of the Church Historian. Here are three shots to give you an idea. Also, notice it is raining. The first rain Utah has had since I arrived 5 weeks ago!

View to the south from the fourth floor.

View to the southwest.

View to the west.

Yeah, click on those to enlarge. It’s my favorite view. High enough to see things, but not so high that you don’t feel a part of things.

After lunch, I turned myself back into Brittany Chapman’s research assistant! I was helping to index the minutes of theUtah Woman’s Press Club from 1891-1895. The minutes were published in the “Woman’s Exponent.” 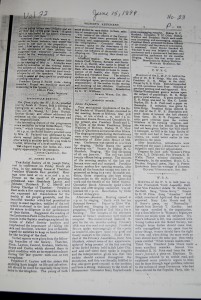 We were making three different indicies. One kept track of which meeting’s minutes were published in which issue of the Exponent. A second charted the names of people in attendance, which meetings they first appeared in, and which minutes they were mentioned in. The third index tracked the officers elected at each annual meeting. 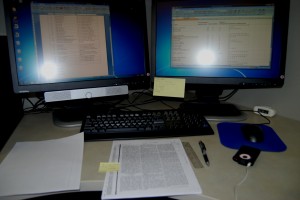 Notice the essential archivist’s tool to the right. I think for this task I was listening to Sting. Tomorrow will be my last day of Archiventures. What a fantastic experience it has been. I will never forget the people or this place!

This entry was posted in Collections Processing, Reference and tagged Brittany, reference, scope and content. Bookmark the permalink.