Last week, when I found out that a great uncle had served in the US Civil War with the 30th Virginia Infantry, Co. E., from 19 July 1861 until 31 March 1865, dying just 9 days before the surrender at Appomatox Court House, Virginia, it was hard. I was distracted. 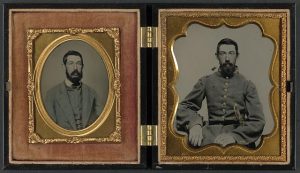 Major Robert O. Peatross of Co. E, 30th Virginia Infantry Regiment. Although this soldier is not my relative, he is from the same regiment and therefore wears my ancestor’s uniform.

To review, when the service record I ordered for my third gr-grandfather’s brother, Augustus Blanton (1839-1865) arrived, it was incomplete. I did not know how his service ended. I only knew I could not find record of him and his new wife after the war. The way I learned about his death was with the help of my favorite reference librarian at my local public library. She directed me toward a wonderful series called The Virginia Regimental Histories Series. 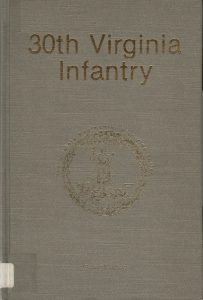 If your library doesn’t have it in its collection, ask for it via inter library loan. There is a volume for every regiment, which means the collection is huge. So, be specific when making a request. 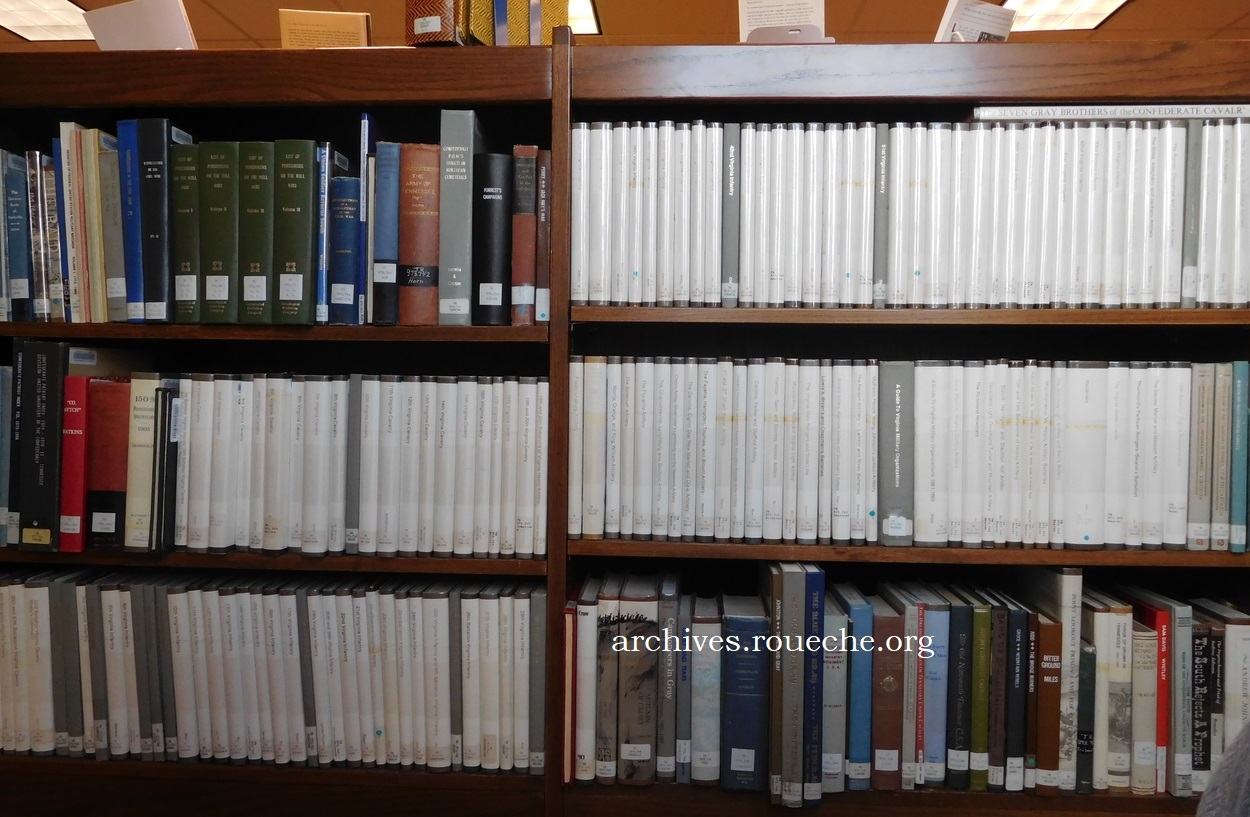 Here is Augustus’ entry on page 82. 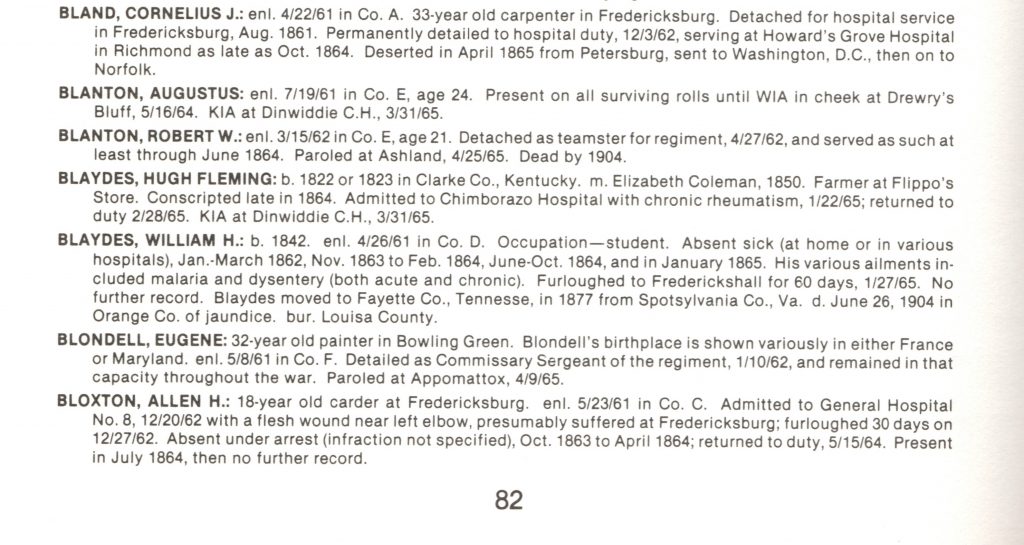 You can see that the soldier listed two names beneath him also died in the same battle. There is so much good information in these books.

I wanted to know more about Augustus Blanton and about my other soldier-ancestors, but I had to get over that “being sad for someone who died tragically even though he wouldn’t still be alive, today, anyway” feeling. Do you know what I mean?

The next week I was listening to a podcast called Genealogy Gems by Lisa Louise Cooke, episode 209, when she mentioned an online resource called USNewsMap.com. Because this tip followed a discussion on military research, I had the immediate thought that I could use it to track my ancestors who survived the war but didn’t leave much of a paper trail. This Georgia Tech site is a portal to the Chronicling America project of the Library of Congress, which digitizes historic newspapers from around the country. (The LOC has its own search engine for the site, but it can be tricky to use.)

I went home from the archives that very night and entered the name John W. Dyson. (I was trying to create a distinction between two cousins that had the same name.)  Here is what the site looks like. It is extremely easy to use. Enter a search term and date parameters, then hit enter. (Dates must be between April 1789 and December 1922.)

I entered my search terms and dots began to appear across the map, pinpointing the dates and places that articles were printed with a mention of my subject. While I was reading newspaper accounts in the Richmond Times-Dispatch about the two John Dysons, I came across an article about another relative; Henry Dyson. It was what my professor would have called, “serendipitous research.”

I wasn’t prepared for what I found. 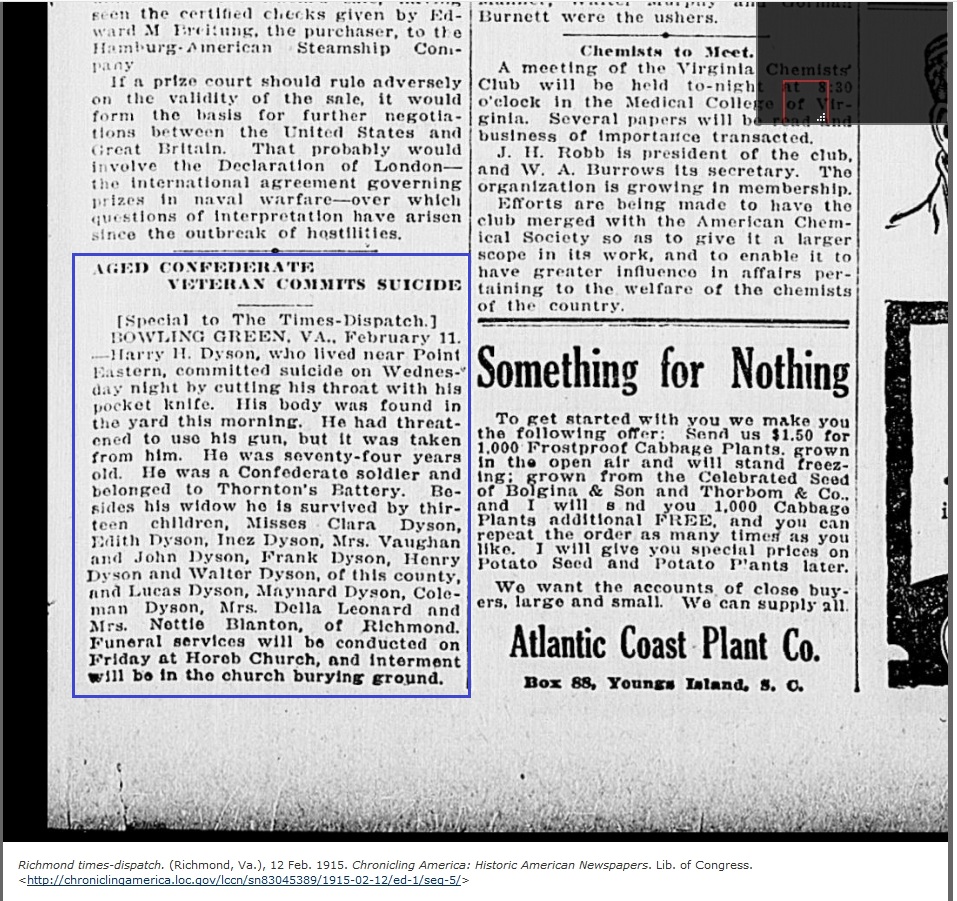 I held my breath until I compared the list of surviving children mentioned in the article to the names on my tree. This was my Henry. My heart broke. I couldn’t speak about it for three days.

When I finally added the death date to Henry’s page on FamilySearch, I was able to locate his death record and attach it. 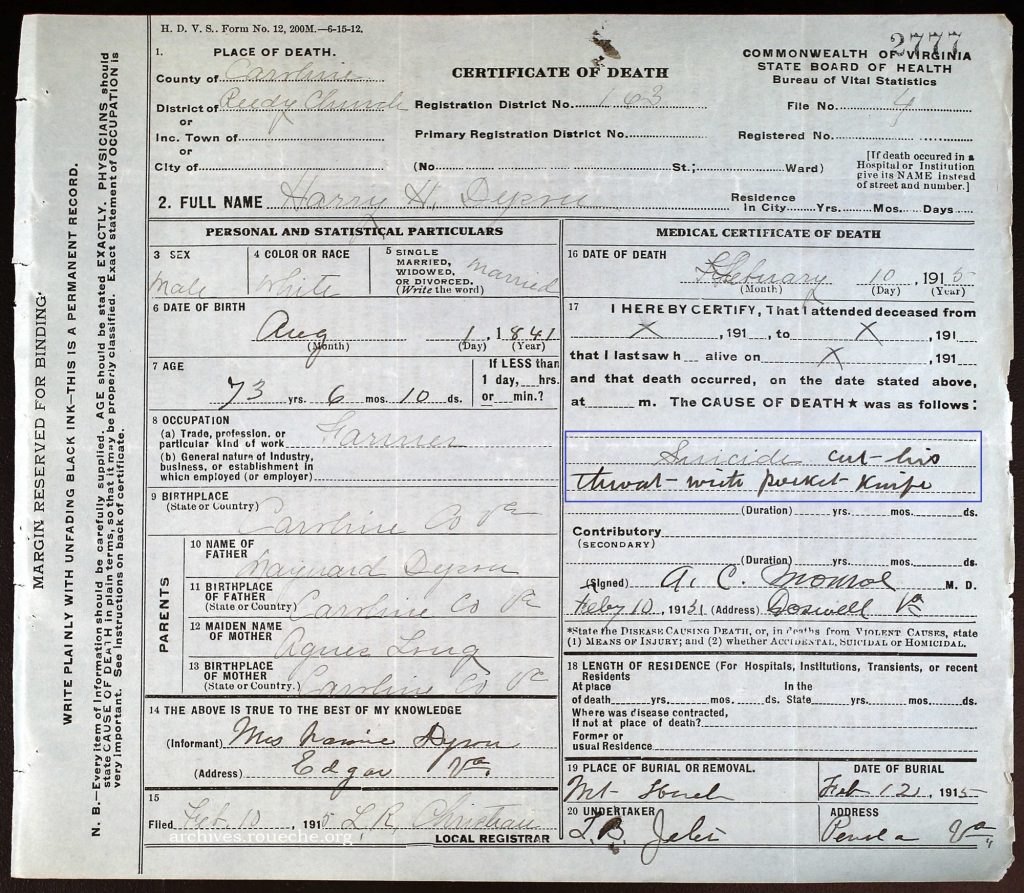 War claims its victims. Sometimes not in the same century.

It is too late for me to make Henry’s life better or easier. I think by documenting it, however, and those of his children, I can honor him. I hope that by sharing this journey of discovery and all of the sources I used, I can help some other family researcher and, in some small way, that honors my kindred dead, as well.

Here are a few more wonderful resources to help you find information and possibly even photographs of your soldier-ancestors.

Finding images of your veteran ancestors was Scott Fisher’s podcast discussion with photo expert Ron Fox on Extreme Genes Episode 165. They specifically mention the U.S. Army Heritage and Education Center in Carlisle, Pennsylvania. Several of the repositories they mention have to be visited in person but many have digitized materials online.

National Archives Civil War Photos online collection. With any of these sources, try searching under the regiment name or battle site.

The Confederate Veteran magazine. First published in 1893, my library has bound volumes through 1923. I used the index and searched by surname, unit name, and battle site. 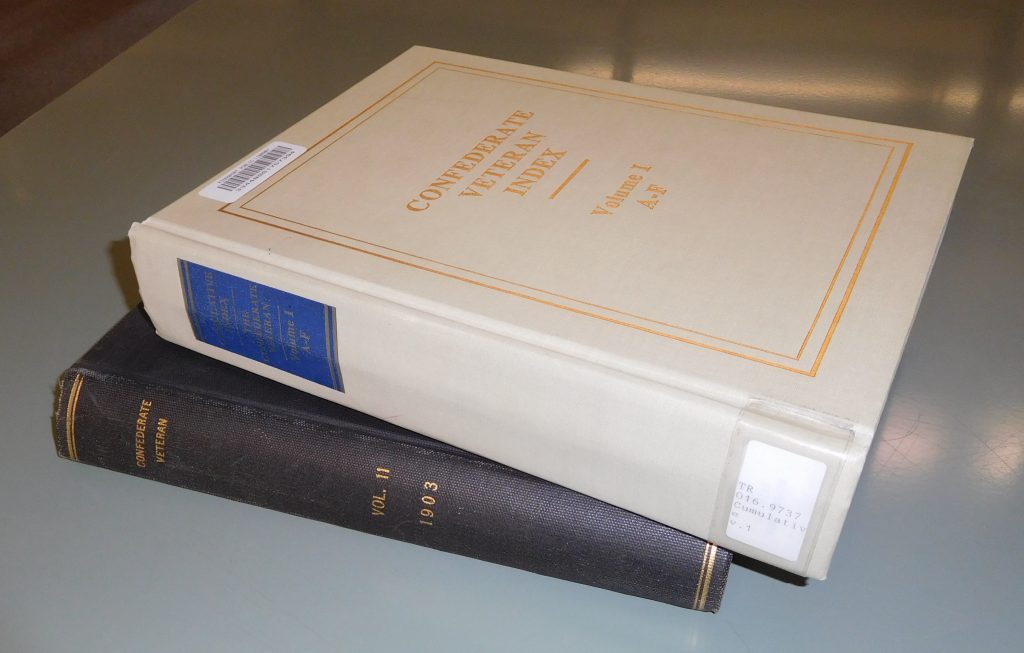 One volume of, and the index for, The Confederate Veteran

These aren’t just filled with ‘Lost Cause’ rhetoric. There are many touching and honest stories. You could spend days reading the first-hand accounts. Here’s what my library’s collection looks like. 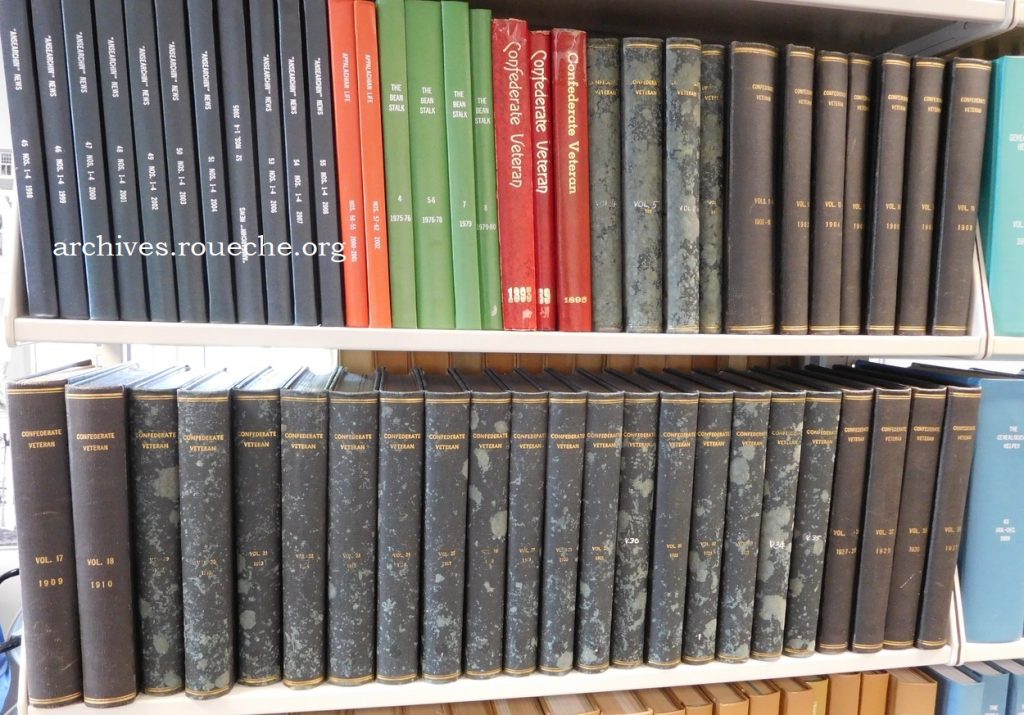 Library of Congress. The LOC has 19,915 images pertaining to the US Civil War available online. I am hoping to find a regiment photograph of 30th or 40th Virginia Infantry Regiments or Thornton’s Light Artillery (Caroline Light). The files are excellent quality and can be downloaded in a variety of formats. See example below: 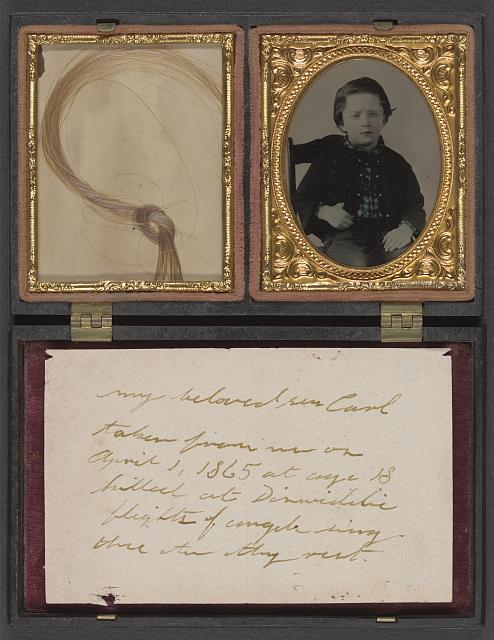 This soldier, pictured here as a child, died one day after Augustus in the same battle.

Museums, National Cemeteries, and historic sites. Many battle sites have been preserved and have interpretive tours. See the National Park Service website for a list of locations open to the public. For veteran cemeteries, the Veterans Administration has a listing, here. The NPS has their own list, here. Richmond, Virginia is rich with Civil War heritage, including Oakwood Cemetery, Chimborazo hospital, and a NPS visitors center and museum.

Good luck to you on your soldier-ancestor discovery journey.
Civil War Ancestors Part I