My mother’s paternal lines are rather a mystery to me. I’ve traced the Armstrong and Blanton lines back to the early 1700s in America. I’ve uncovered slave holders and railroad workers; farmers and clerks. Now, it was time to discover if I had any Civil War veterans among my ancestors. I started by going through my tree and making a list of people who were between the ages of 16 and 40 during the years 1861-1865. 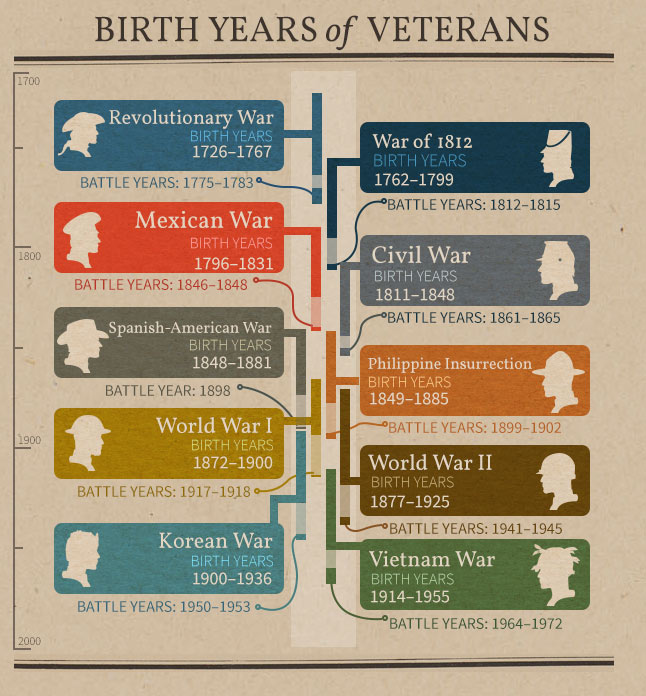 Once I identified several people, I took this list and used the National Park Service Soldiers and Sailors Database.

Their search engine is fairly easy to use. Enter in what information you have and a list of possible matches will be provided. I searched on three of my Blanton ancestors; Robert, Lewis, and Augustus, as well as one of my Armstrong ancestors. 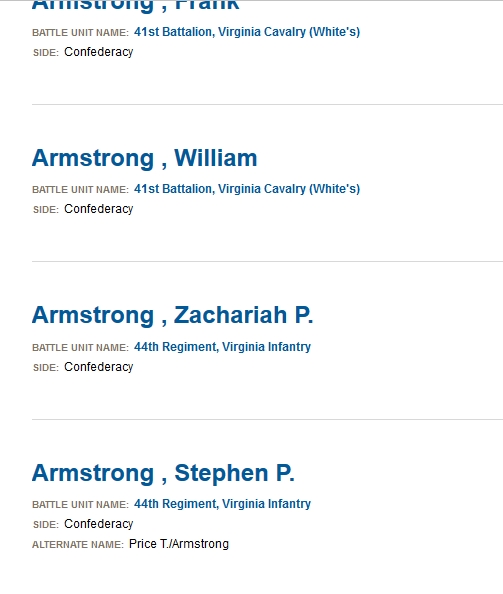 If you don’t find a match, try removing some details to broaden the search or adding more to narrow the search. I scrolled down until I found my great-great-grandfather, Zachariah P. Armstrong. When you click on the soldier’s name, you can find out more about him. 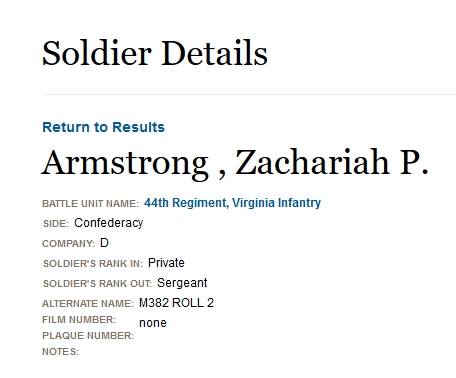 As you can see, Zachariah served in the 44th Regiment, Virginia Infantry.

The regiment details page will help you verify that you have indeed matched your ancestor to the correct soldier as it includes the counties from which the men were enlisted. Zacharia is from Hanover County. It also helps you to track where your ancestor likely served and in what conflicts he participated. The NPS website has information about all of the units, Northern and Southern.

When I performed searches on the Blanton side, I had trouble distinguishing my people from among the many more commonly named soldiers, but Augustus was easy to single out. I wanted to be certain because I planned on ordering his records from the National Archives. 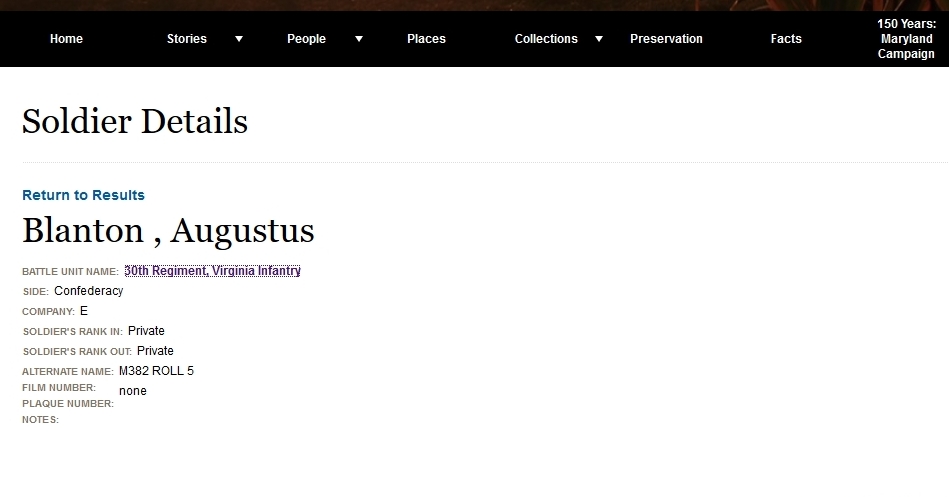 Knowing Augustus was from Caroline County, Virginia, I checked the history of the 30th Regiment. 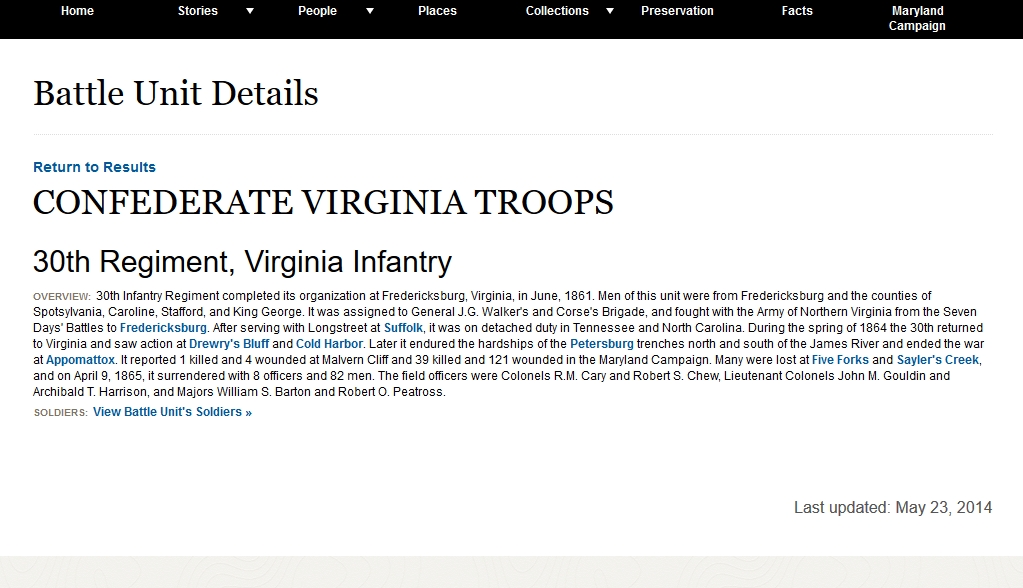 When I was ready to place my orders for compiled service records from the National Archives and Records Administration (NARA), I returned to the Soldiers and Sailors Database page (it’s under the “People” tab) and clicked on the blue highlighted link.

The link takes you to NARA’s website for Requesting Copies of Older Military Records. You can mail in an order form or make your request online, which is what I did. A Compiled Military Service Record is $30.00 so prepare yourself. I ordered two last summer. Happy birthday to me!

The files came as a PDF and they were photocopies, unfortunately, not scans. Here is a sample of what Augustus’ looked like. 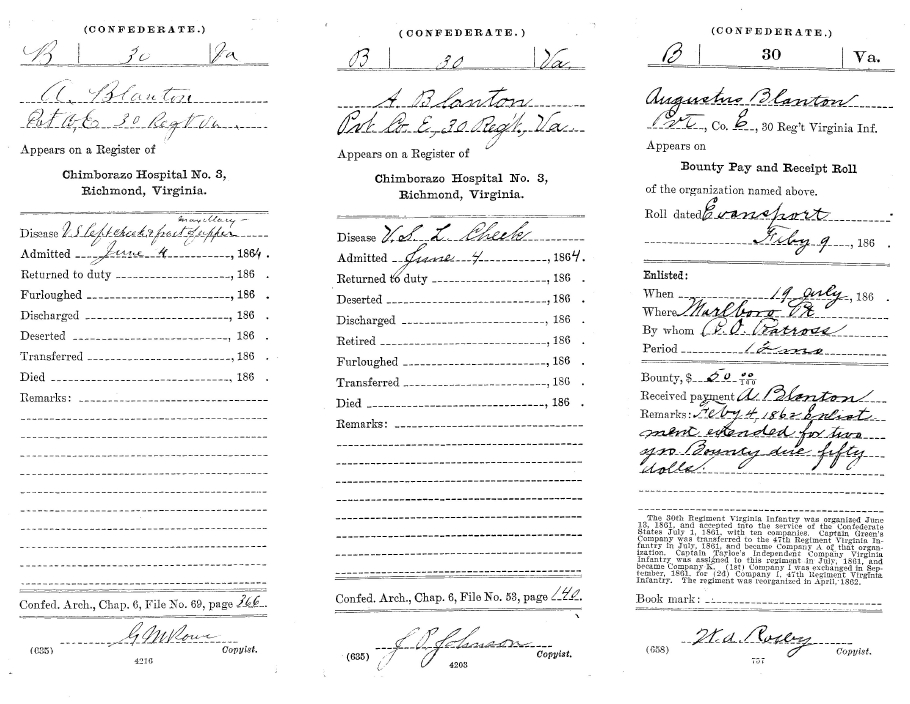 As you can see above, he was injured and admitted to Chimborazo Hospital on 4 June 1864. Chimborazo hospital, situated on a hill on the eastern edge of Richmond, was the largest medical facility in the Confederacy. 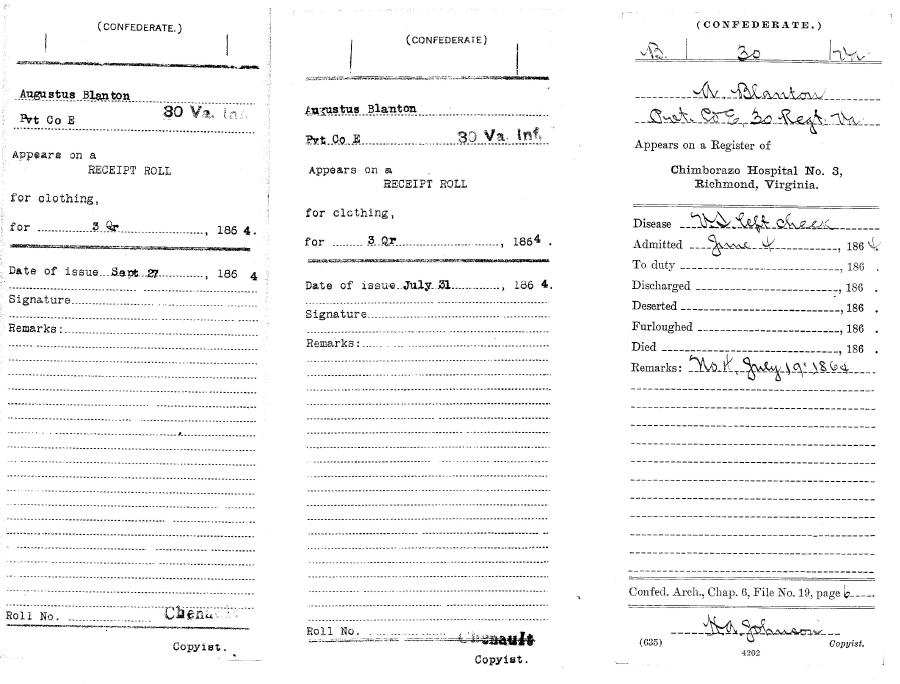 Augustus was a patient through the middle of July, but by the 31st, he was issued a new uniform and resumed service with Company E. Between March 30 – April 9, 1865, the 30th Regiment was part of the deadliest battles of the war leading up to its surrender on April 9, 1865 at Appomattox. These included the Battle of Dinwiddie Court House on March 31 and, on April 1, the Battle of Five Forks. Sadly, March 31 was Augustus’ last day of duty, never to return home to his new bride.

In full disclosure, I am not a Civil War expert. If I can go on this journey, anyone can. I just felt I could no longer put off learning about this branch of my family and this era of their lives. Living in the South and having access to an excellent local history room at my library and so many resources available online has made this endeavor possible, though no less emotional. Special thanks to my brother-in-law, Michael Roueche, who studied the military records with me and made some excellent research suggestions.

My next blog will provide many more sources to help with your Civil War ancestor investigations.
Civil War Ancestors Part II