Genealogy: On the Job

I’ve been working on documenting my mother’s paternal line, lately. What is so great about using FamilySearch is that the more sources you attach to an ancestor’s page and the more vital information you include, the more the system works to make connections between your ancestor and available digitized records.These connections are called Record Hints. Even when you aren’t performing searches of your own, even if you are having a Netflix marathon or are driving cross-country, the FS system is working away to find possible matches and post them to an ancestor’s page.

Follow the purple arrows. See those blue boxes? Those are Record Hints! I make time every week or two to check my tree and scan for new ones. Then, I click through to the individual’s page, examine the recommended document and either attach it or mark it as “Not A Match.”

See those record hints on James Asa’s page? Looking through those, I found a set of twins, Sunday! These twins were unnamed on their birth record and they did not survive to the 1900 Census. I’ve been working on this family for several years and didn’t know about them, so this was a surprise break-through.

And, by the way, isn’t Asa the cutest name for an ancestor? I have ancestor crushes based on their names. Do you do that? Aubrey and Willis are two others from this line; Angus and Duncan from my Scottish line. Anyway, I digress.

Here’s the find I really wanted to share with you. This is a World War I draft registration form for Allie Wilson Hart (1890-1958). Under present occupation is written “schuffer.” 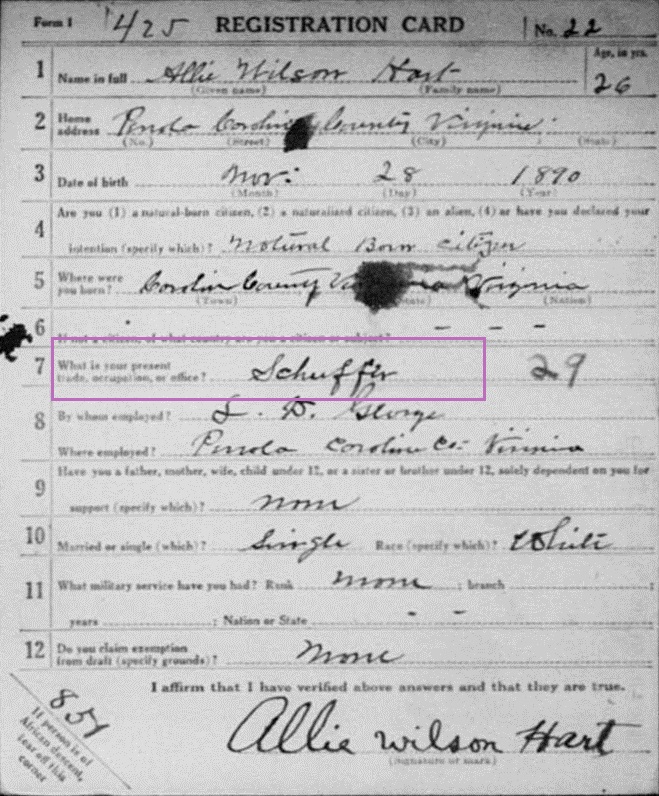 Not knowing what a “schuffer” was, I entered the term into Google and it asked me “Do you mean “chauffeur?” Well, no, I didn’t. But, hmmm.

So, I posted the document on the Facebook page for my favorite genealogy podcast Extreme Genes. I remembered that the host once interviewed an expert on historic job descriptions and I thought, just maybe, some reader out there might know about this. Within an hour, the host himself, Scott Fisher, responded with a great tip (because he’s awesome like that). He suggested I check the next census after the Great War, 1920, to see what occupation was listed for Allie.

Here’s the census listing for the Hart household in the Madison district of Caroline County, Virginia; 1920. It looks like three men are residing together; a pair of brothers and a cousin. 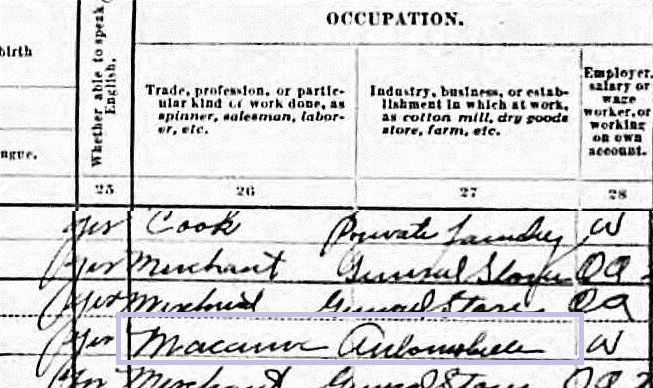 A close up of their occupations shows that two were working as merchants in a general store and Allie was a “Mechanic” in the automobile industry. I had to read it very carefully because the indexer had transcribed his job as “macaroni.”

When I reported back to Scott Fisher with the results of my search, he posted a lovely photograph of his own relative that also worked as a chauffeur! 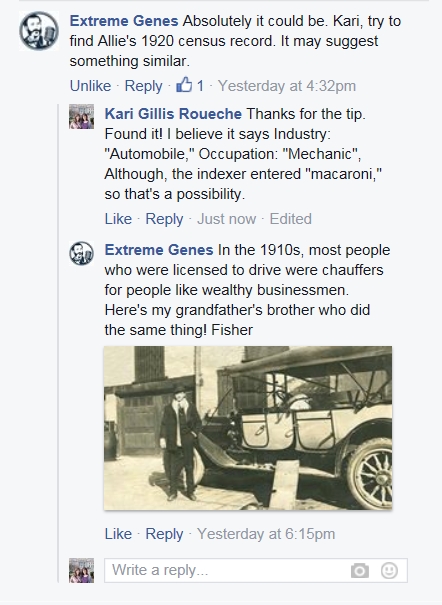 Lessons learned from this week:
1. When your research goes beyond vital statistics, the lives of your ancestors start to take shape.
2. If you aren’t listening to Extreme Genes podcast, already, what are you waiting for? Don’t listen to it in the gym because then you can’t laugh or cry out loud. It’s better for trail runs and bike rides where only the bears can hear you.
3. Get more ideas for how to use WWI draft records in your research from Niki Davis on her “Rooted In Foods” blog. Excellent article!
4. You can do genealogy while binge-watching on Netflix as long as it is a show or movie you have seen before. You’re welcome.

2 Responses to Genealogy: On the Job