I wanted to start by thanking everybody who has been reading my blog. I can feel your support and it is so appreciated!

I took a picture of some letters, today, to give an idea of how loving the Brown family was with each other. Even siblings refer to one another with terms of endearment. Two lessons here: 1. What you leave behind in the way of writing sets an example for the next generation; 2. The way we speak to one another influences the way we feel about each other. 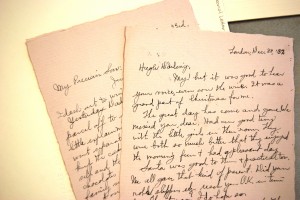 I’m still processing the Hugh C. Series. Two big boxes were stuffed (not an archival term) with notebooks, photos, and letters. So, so, many letters. Sorting, taking things out of envelopes, removing negatives…it all takes time. I will be finished with Hugh C. in the morning, however, and get started on the next series. There is so little time that I feel frantic. Today, I found the Service Member flag that families hang in their window. I’ve made that the feature photo, above. Brandon and I also uncovered a little mystery, today. A zippered, leather portfolio was with Hugh’s papers and I assumed it was his from flight school. I brought it to Brandon to ask how to care for it, since it was full of ephemera, and we decided to leave it intact. Closer examination revealed that it was James G. Coxetter’s and not Hugh’s. They were friends in flight school and Jimmie was apparently killed the year before Hugh. We wondered how the objects came to be in Hugh’s possession when we found the investigatve trail of the donor, Hugh’s sister Mary. She tracked down an aunt of Mr. Coxetter’s (no small feat) and combined Hugh’s and Jimmie’s memorabilia together. There are many pictures of the two pilots with the other officers in the class and of just the two friends in England wearing their smart uniforms. It’s nice to see some of the questions surrounding these two hero-friends answered.

Another discovery in the collection brought much needed levity to the day. Hugh’s cousin Emmett Brown was serving a mission in Great Britain before the war at the same time as Hugh C. I took a letter out of an envelope and began to unfold it, but it just kept unfolding. I stopped, as it was so fragile, and read the first few lines… 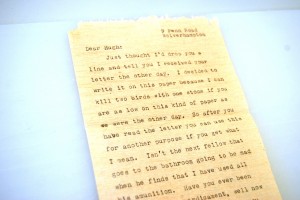 The letter is about 3.5 feet long and full of boyish humor. Click to enlarge if you can’t read it.

That’s right! Emmett sent Hugh a letter written on toilet paper. I took it up to the conservation lab where Chris McAfee flattened it and encapsulated it. This was, of course, after we all read the entire thing and laughed our heads off. Do you think Emmett Brown thought his letter would be read in 2012? 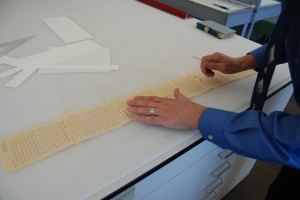 Chris uses a cotton swab and an alcohol/water solution to flatten the creases.

Who knows what tomorrow’s processing will reveal? More Archiventures, I am sure.