Kingsport: “E” is for Eastman

In this town, Eastman Chemical Company is affectionately known as The Big “E” or just “The Eastman.” The new archival exhibit at the Kingsport Public Library celebrates the history of Eastman’s ninety-five years in Kingsport, Tennessee.   Due to the shortage of raw materials available to Eastman Kodak caused by World War I, George Eastman sought self-sufficiency for his company. By 1920, Kingsport, Tennessee, with its nearby forests and the Holston River coursing through town, was selected as the perfect plant site.

The exhibit, which is situated in two cases on the main floor of the library, displays items from 20 different collections within the Archives of the City of Kingsport. Each of these collections were donated by families or individuals and are not part of an official Eastman collection. This demonstrates just how many families claim Eastman as part of their story. I originally examined 39 collections before making my selections. 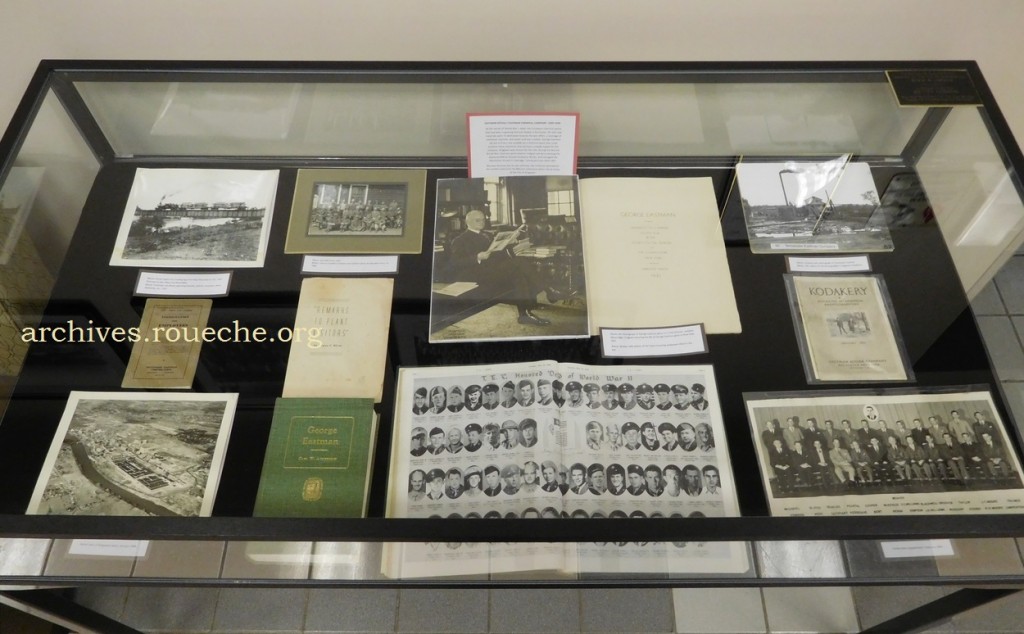 The left exhibit case spans the history of Tennessee Eastman from 1920-1950.

Here are some of my favorite items for the first thirty years of Eastman’s history. This era included great expansion of the Kingsport site, involvement in the Manhattan Project at Oakridge, and the building and running of the nearby RDX manufacturing facility, Holston Ordnance Works. 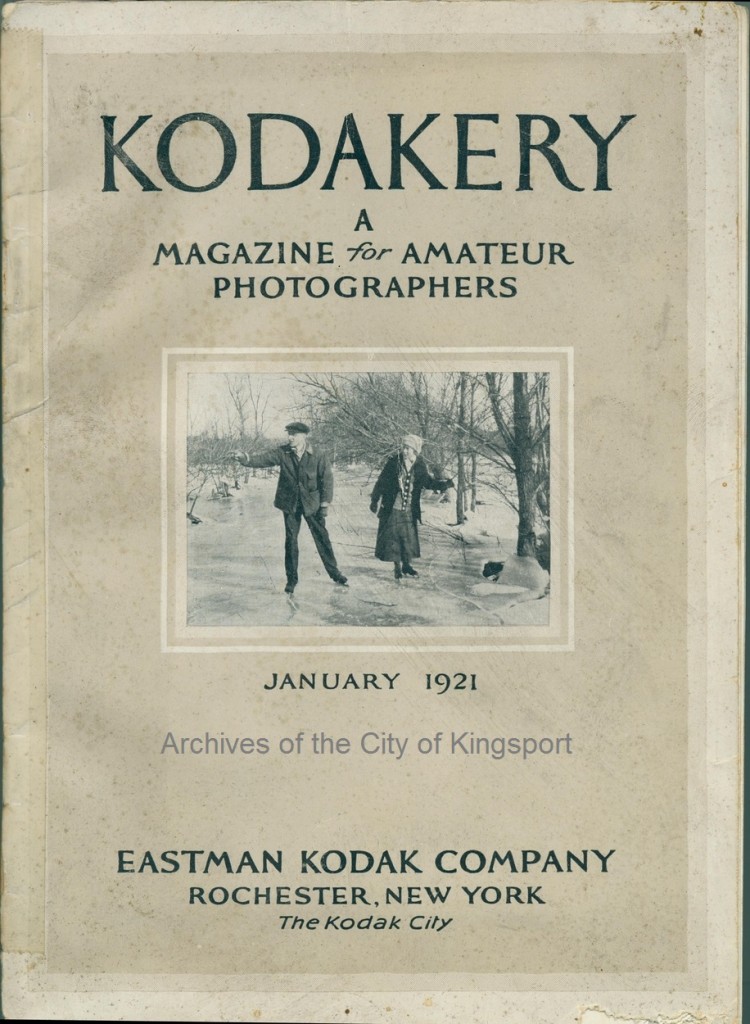 1921 edition of the photographer’s magazine, Kodakery. 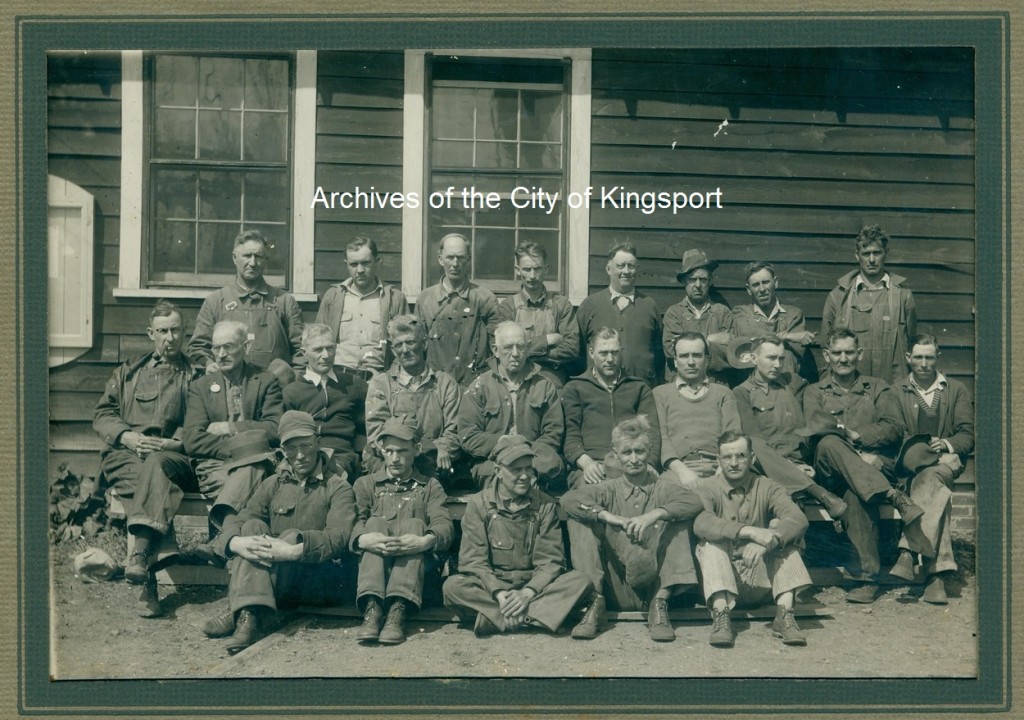 Here are some of my favorite items from the right exhibit case. 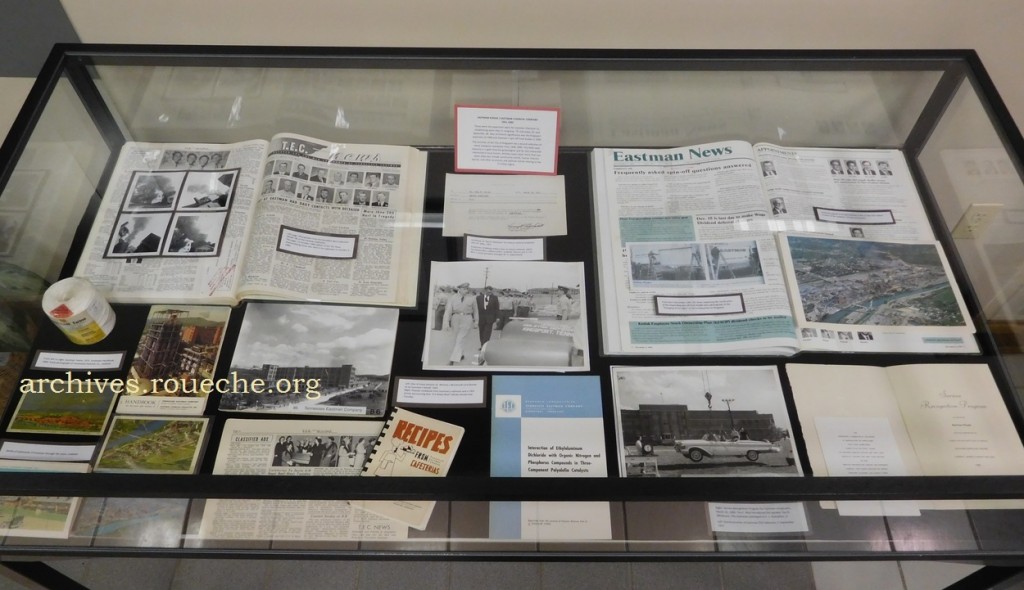 Items in the right exhibit case represent Eastman’s history from 1951-1994.

During these years, Tennessee Eastman suffered its worst-ever industrial accident, built manufacturing plants in Texas, South Carolina, and Arkansas, experienced a spin-off from Eastman Kodak, and discontinued its management of Holston Defense. 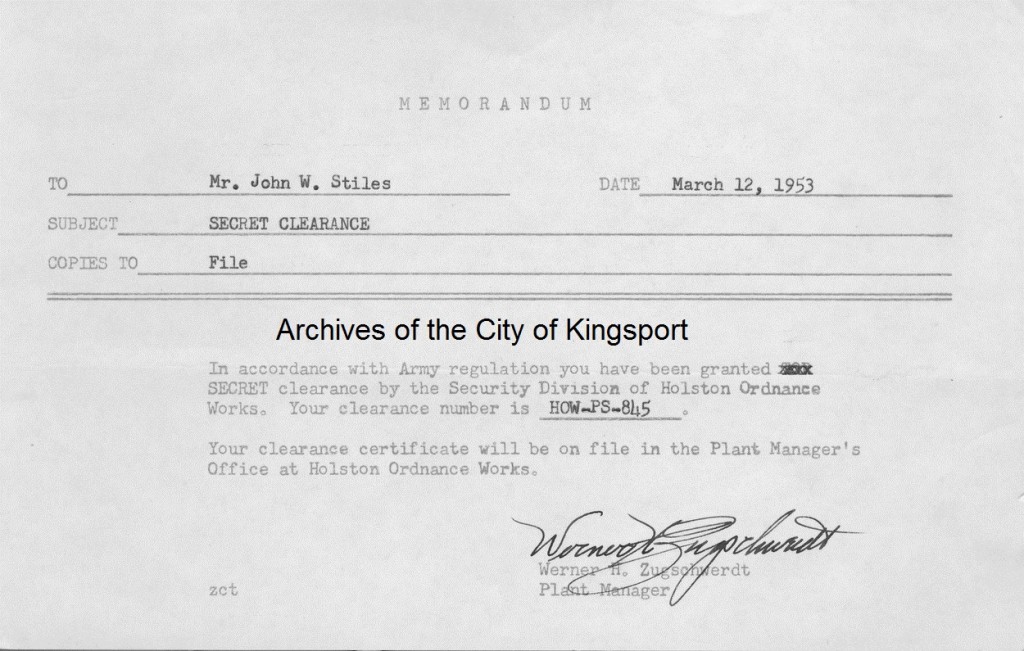 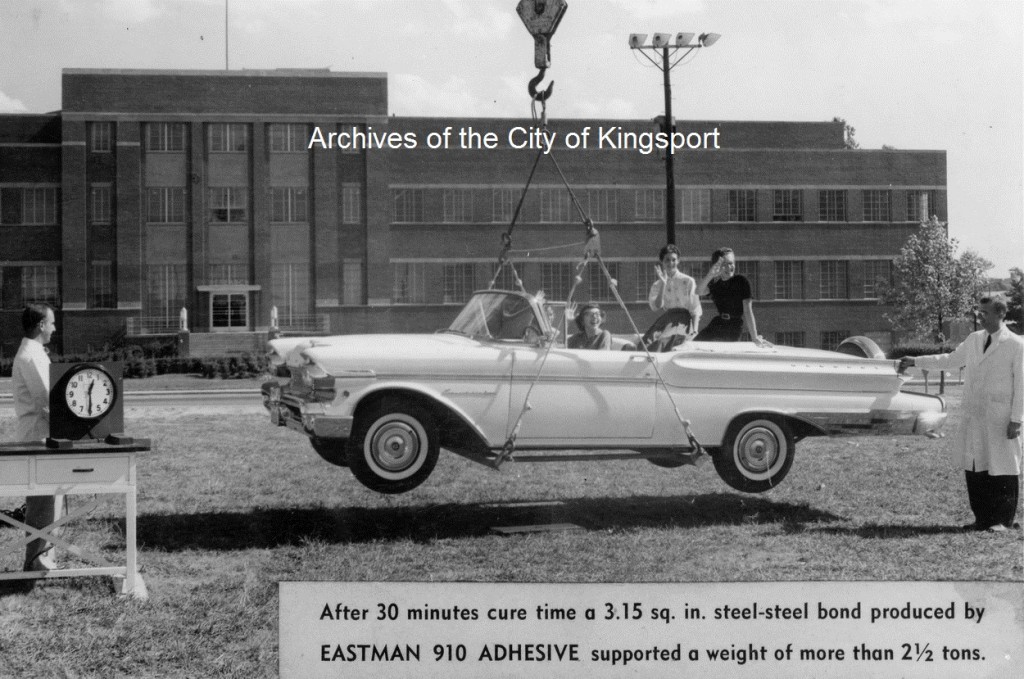 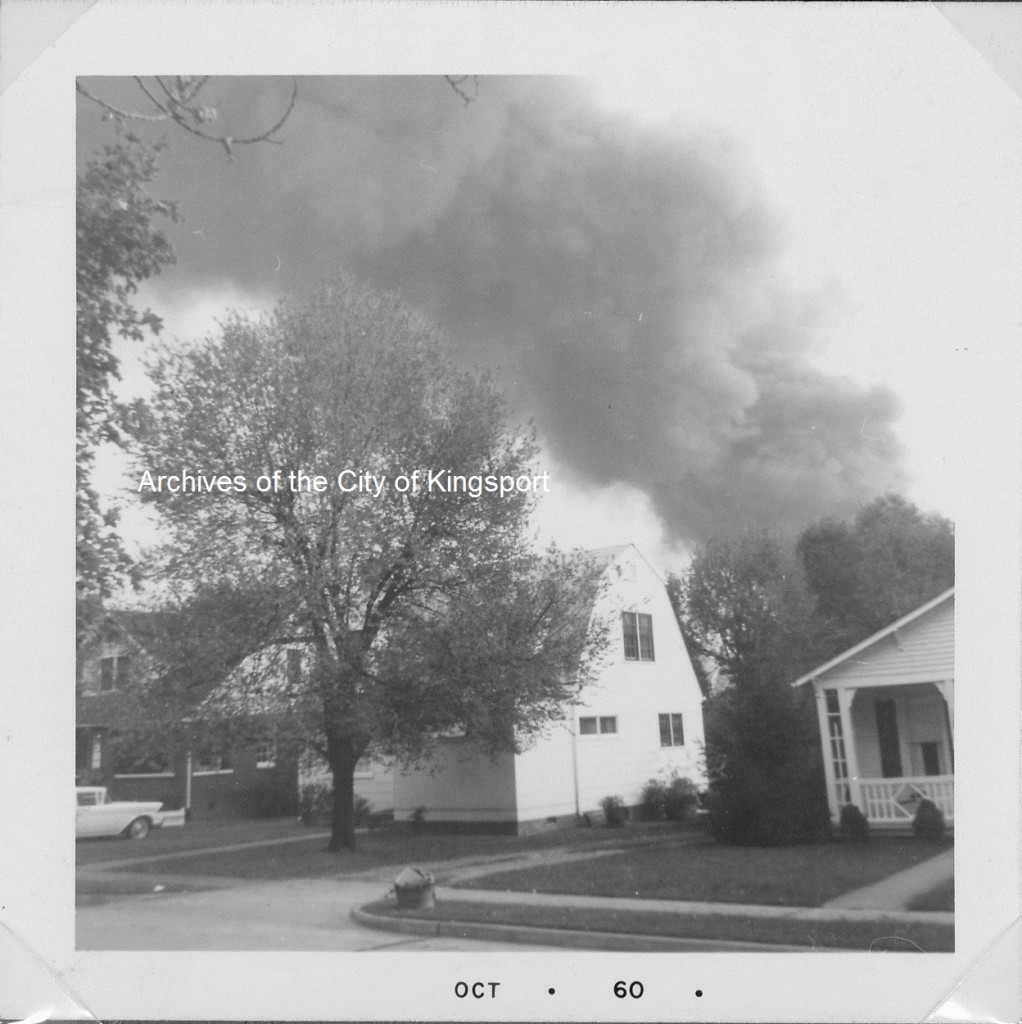 An image of the October 4, 1960 explosion from the Geraldine Byrd Collection. 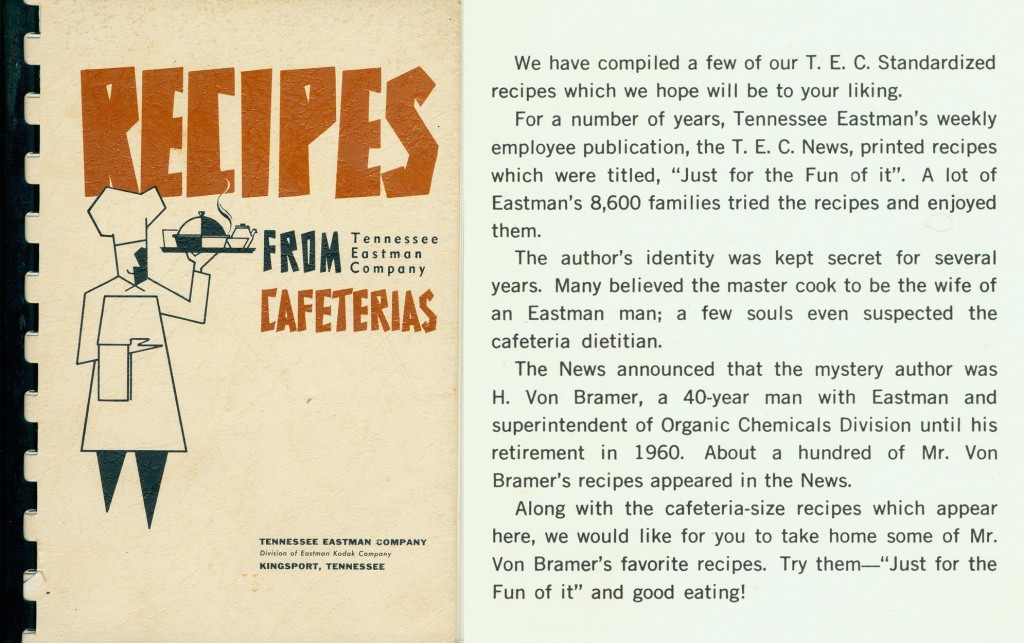 Eastman’s Cafeteria Cookbook revealed the secret author of the newsletters’ “Just for the Fun of It” series, ca. 1965.

Here are a couple of those cafeteria-sized recipes. 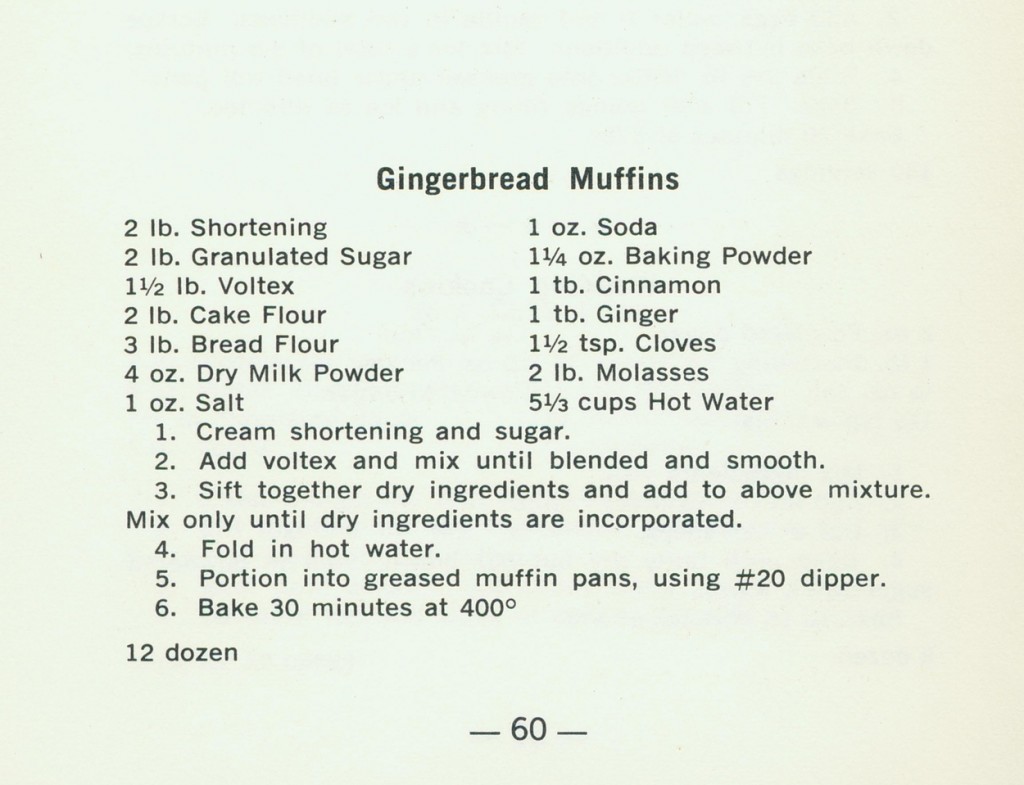 What is Voltex? And, when will you need 12 dozen muffins? 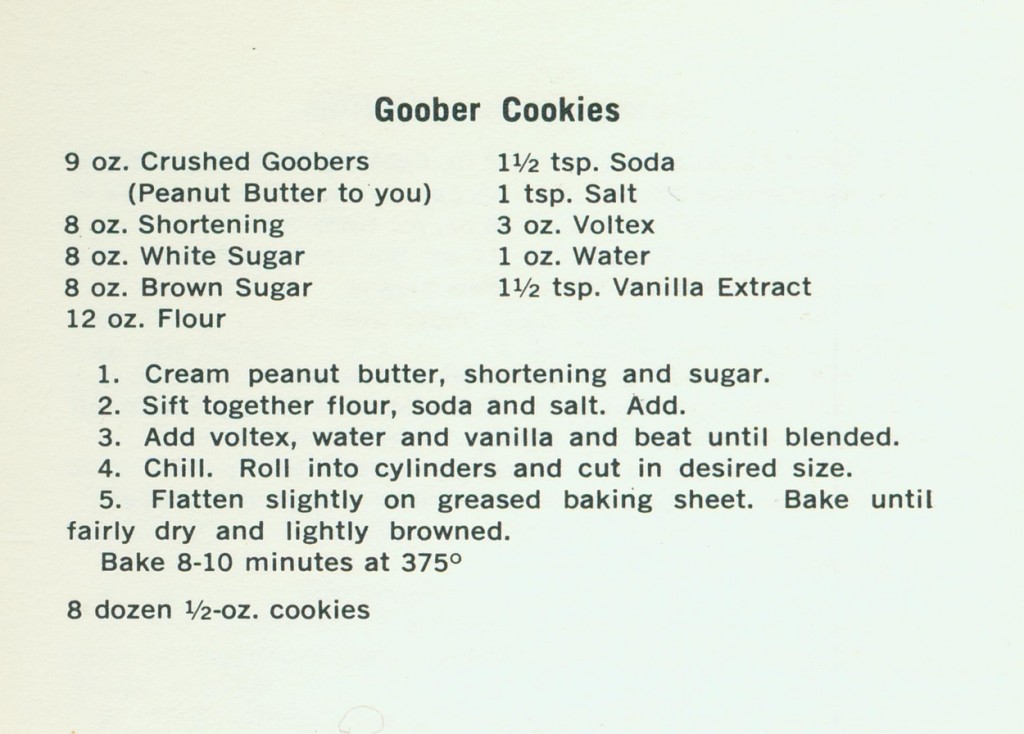 A sign of things to come. Just one of the 1994 spin-off changes.

The thing I am the most excited about for this exhibit is the chance to display three of our bound volumes of the TEC Newsletters. The archives has a complete set from 1946-1999. In the first case, the 1946 volume is opened to Eastman’s May 28 tribute to their WWII honored dead. In the second case, the 1960 and 1993 volumes are turned to the tribute to the 15 employees who died in the Analine explosion and to the Kodak spin-off, respectively. The bound newsletters are a genealogist’s and local historian’s dream. Archivist Brianne would love it if you came in to read them. Mention this blog and you will receive a discount!

The Eastman history exhibit will be on display until April 10, 2016.

This entry was posted in Kingsport and tagged archives, Eastman, exhibit. Bookmark the permalink.

8 Responses to Kingsport: “E” is for Eastman