I’m not referring to some distant ancestor who fought in the War of 1812, I’m talking about a real live, first cousin. After our grandmother died in 1989, she salvaged boxes of family keepsakes that were bound for the dumpster. The dumpster! I have never met my cousin Sandra. She grew up in Maine; I grew up in California. She ended up in Canada; I ended up in Tennessee. This is where social media can help the family historian. While cruising Pinterest, one day, my cousin found one of my genealogy boards and recognized our common grandmother, my dad’s mom. She looked around and found a photo that needed a caption correction and posted a comment. That’s when this magical correspondence began.

Sandra spent time in Maine, this summer. While there she began photographing the pictures that she rescued and that her mother, my dad’s sister, painstakingly labelled. Over a period of weeks, I would open my e-mail to a new batch of photos every few days. Each batch had more treasures in it. From pictures of my dad during his little boy years, to pictures of our grands and greats, aunts and uncles, I had never seen before; including pictures of our grandparents in their first few years of courtship and marriage.

Here are just a few examples. 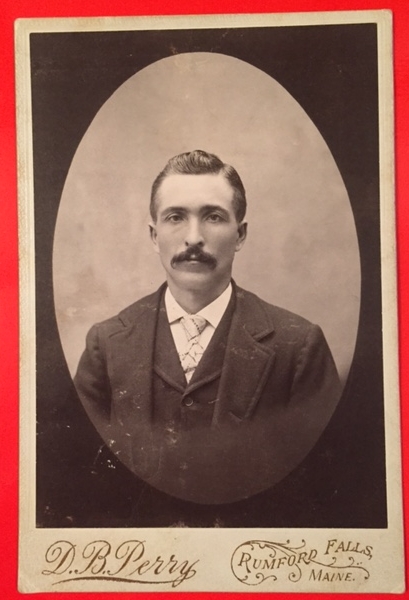 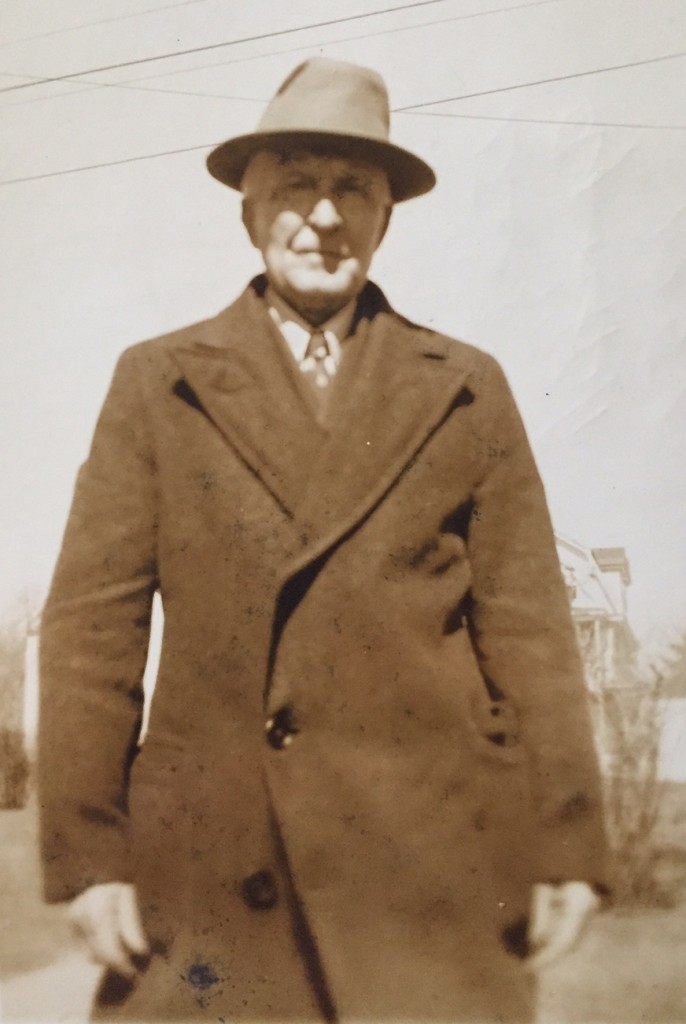 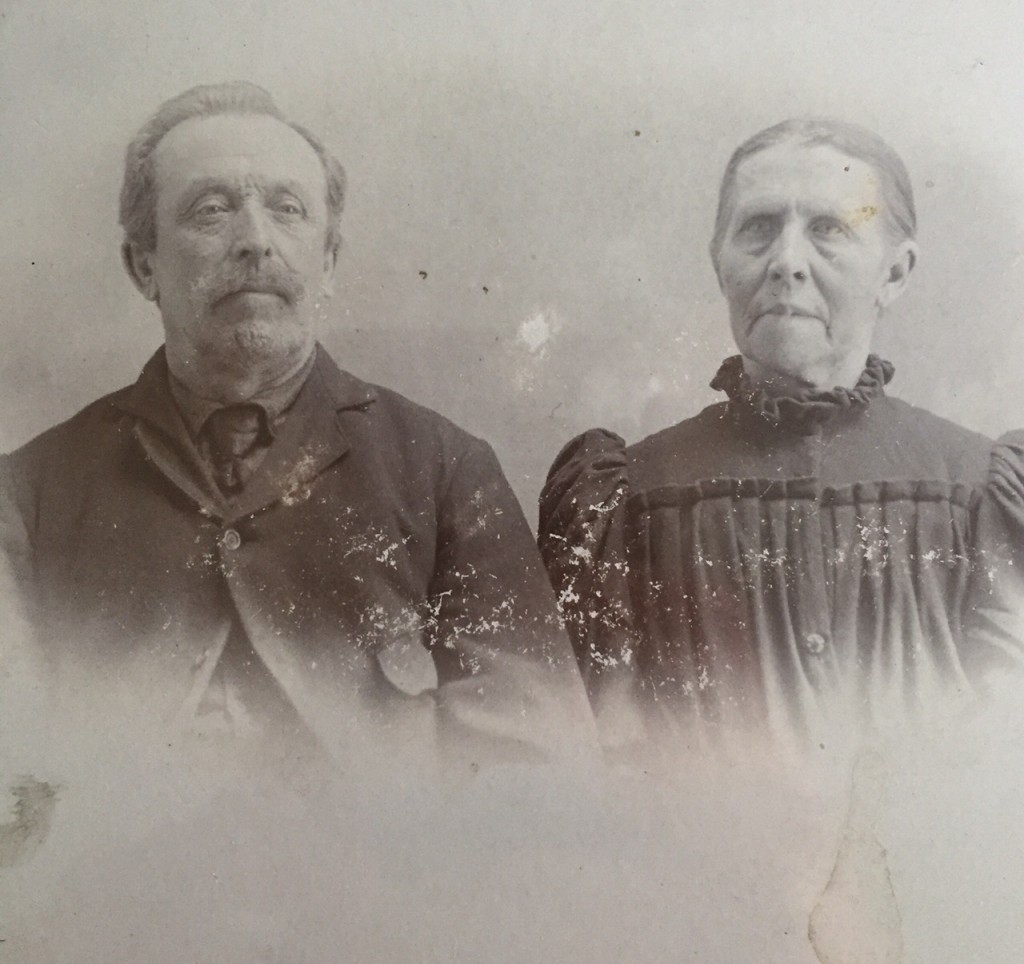 Pictures of the Poisson’s daughter Emilie (1868-1940), my great grandmother, throughout her life. The first is with her husband Jospeh Camille Carrier (1866-1967) and their first son, Ena. 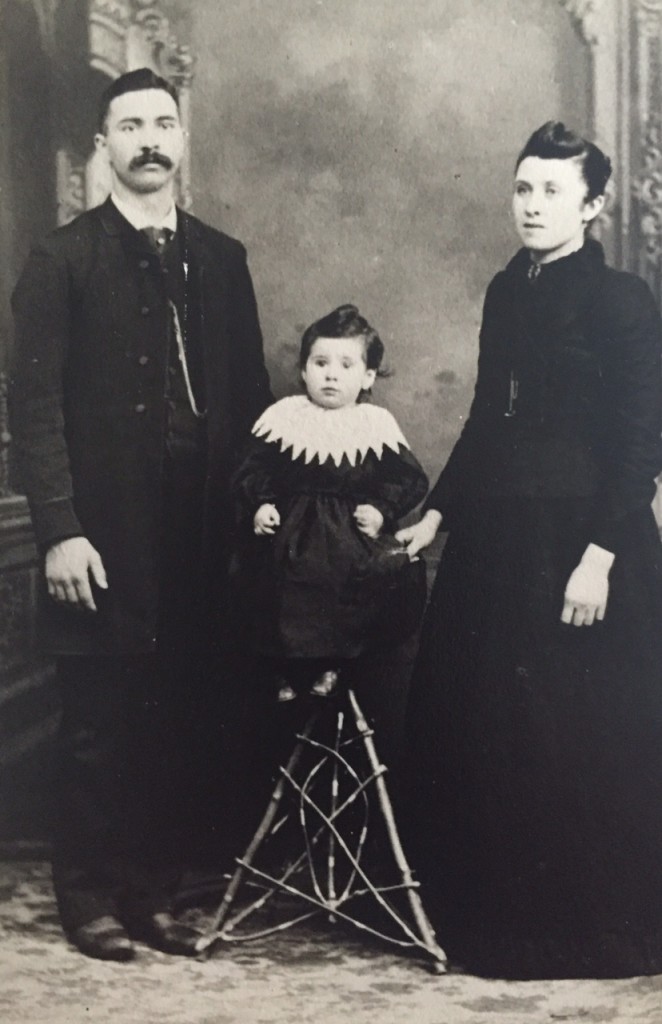 Emilie Poisson Carrier in 1912 with four of her ten children 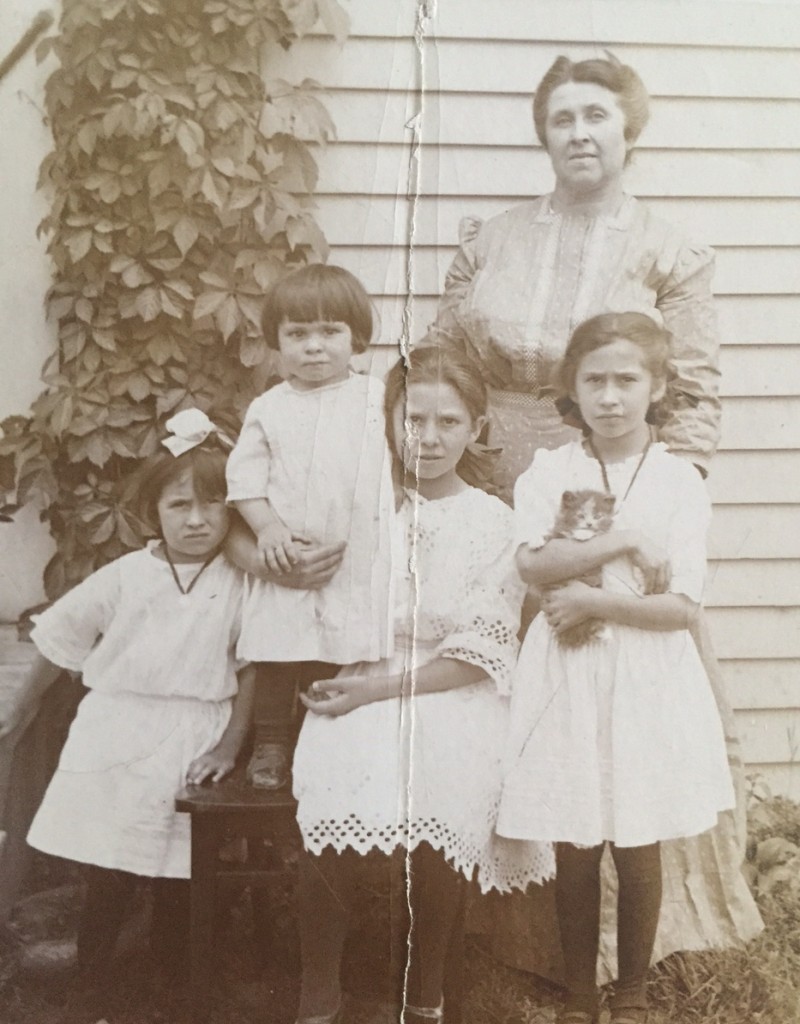 Emilie (far right) with all of her Poisson siblings (and a few nieces and nephews), undated 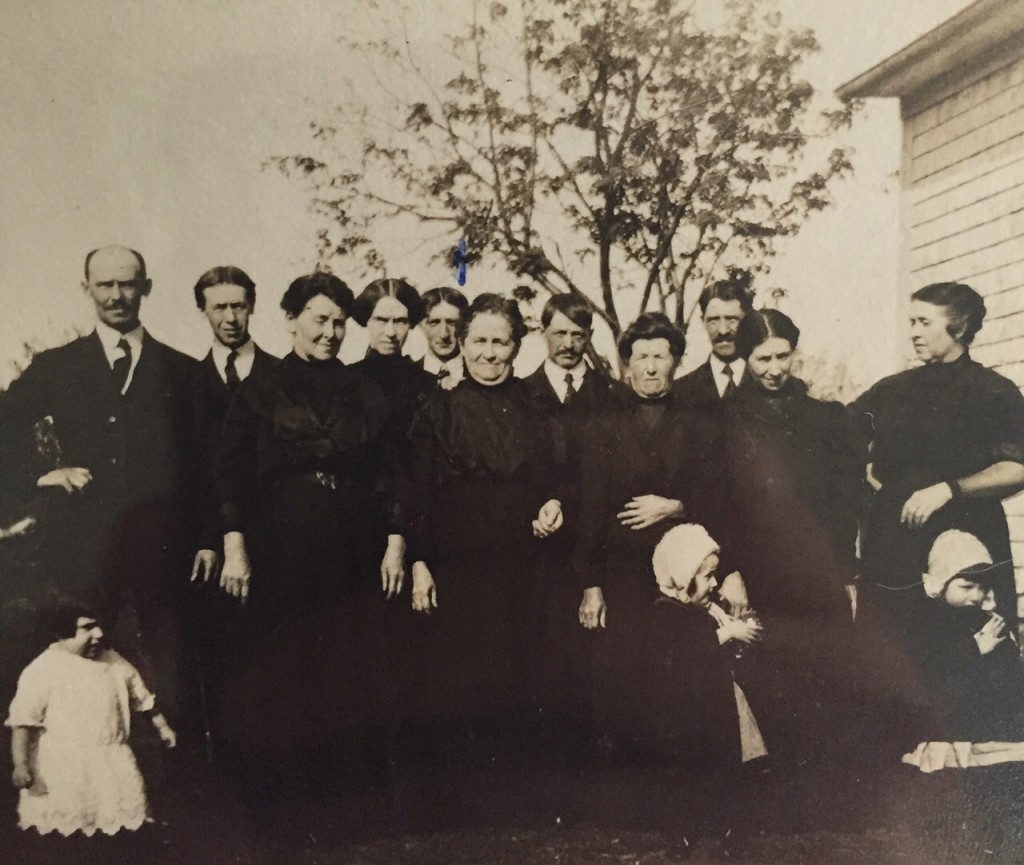 Emilie and her husband Camille with all ten children, 1928 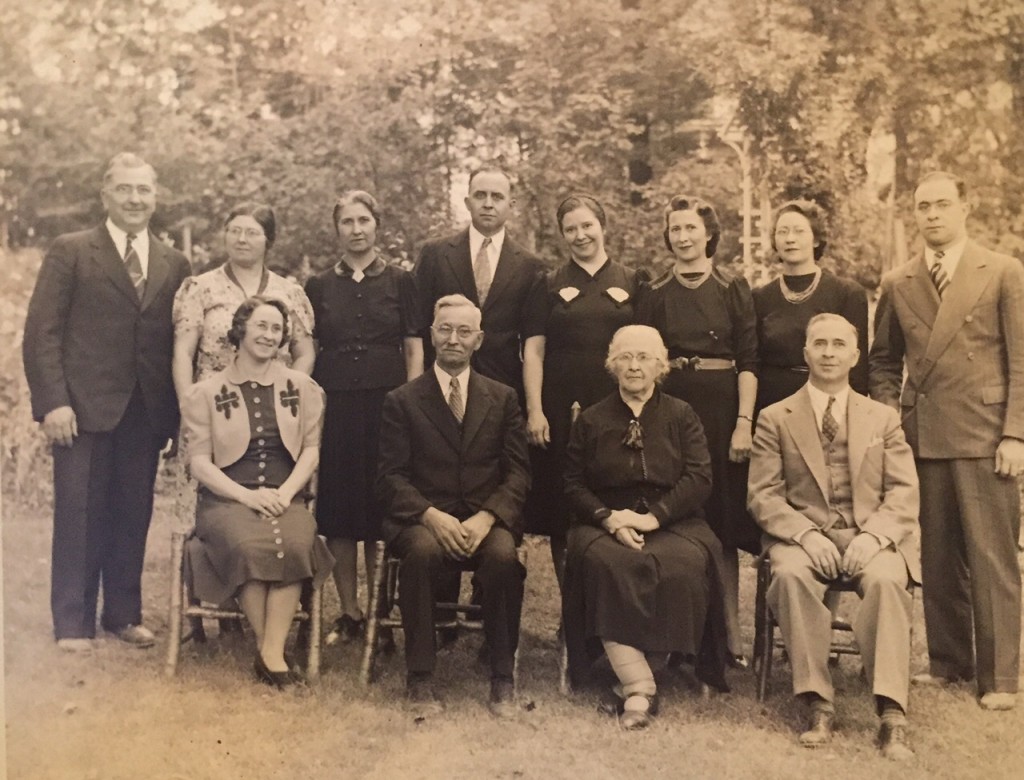 Prior to this e-mail exchange, I only had one photograph of Emilie’s father-in-law, Ferdinand Carrier (b. 1838), and mother-in-law, Silphide Baril (b. 1839), that I had downloaded from Ancestry.com 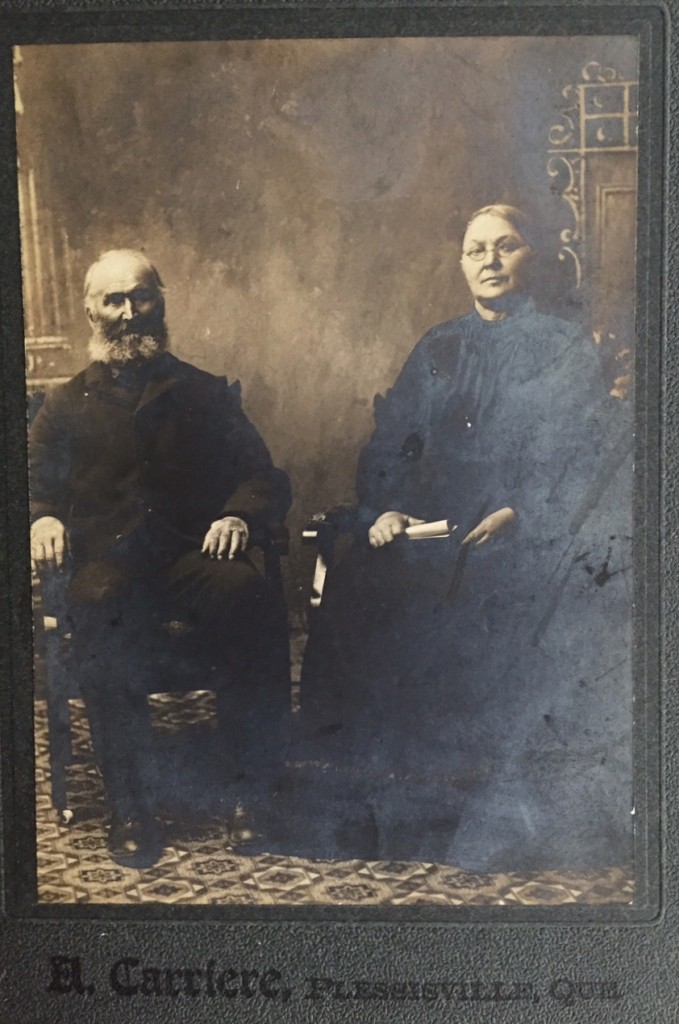 But, now I have this image of Ferdinand Carrier (or Fortunate, as the family calls him) 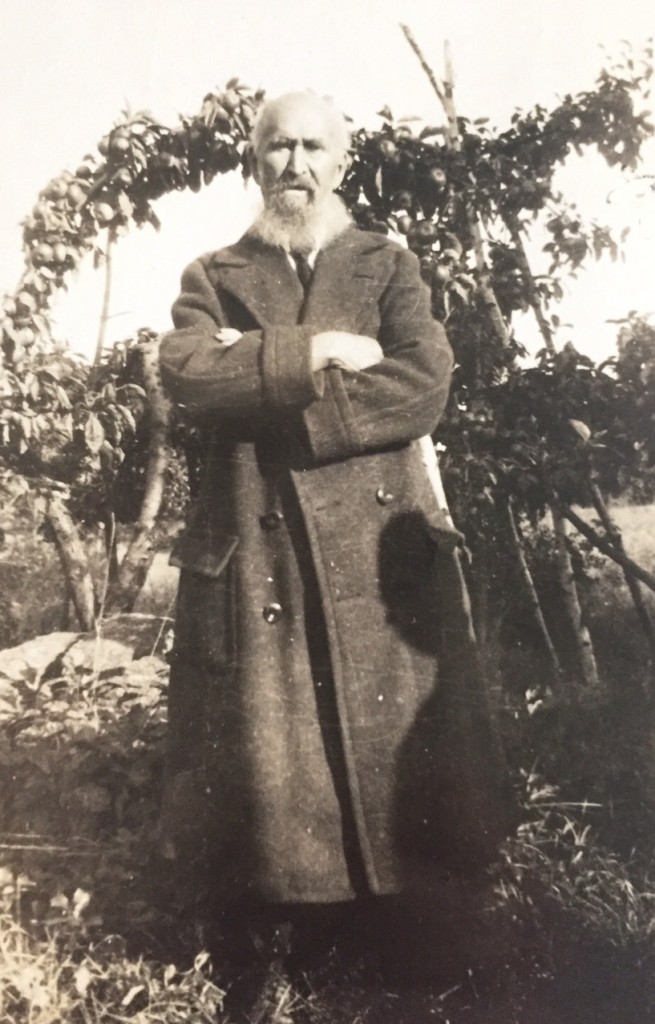 I got a kick out of the series of photos that seemed to demonstrate life in Maine; woodcutting and fishing. Here’s one of gr-grandpa, Camille. 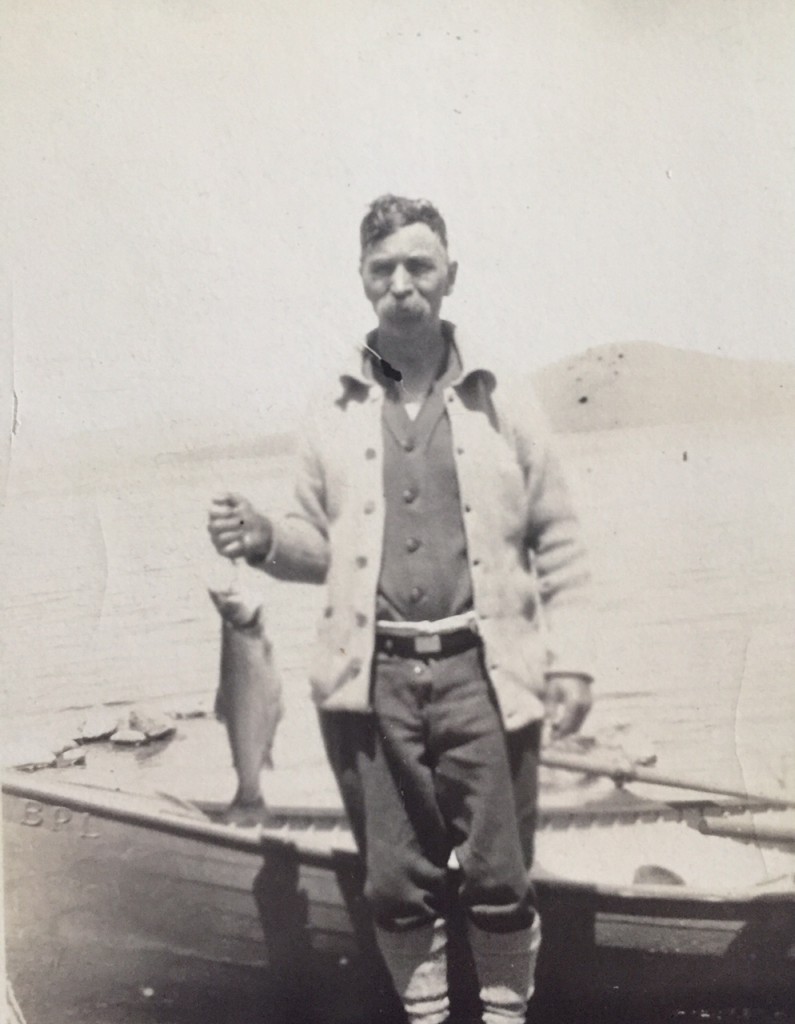 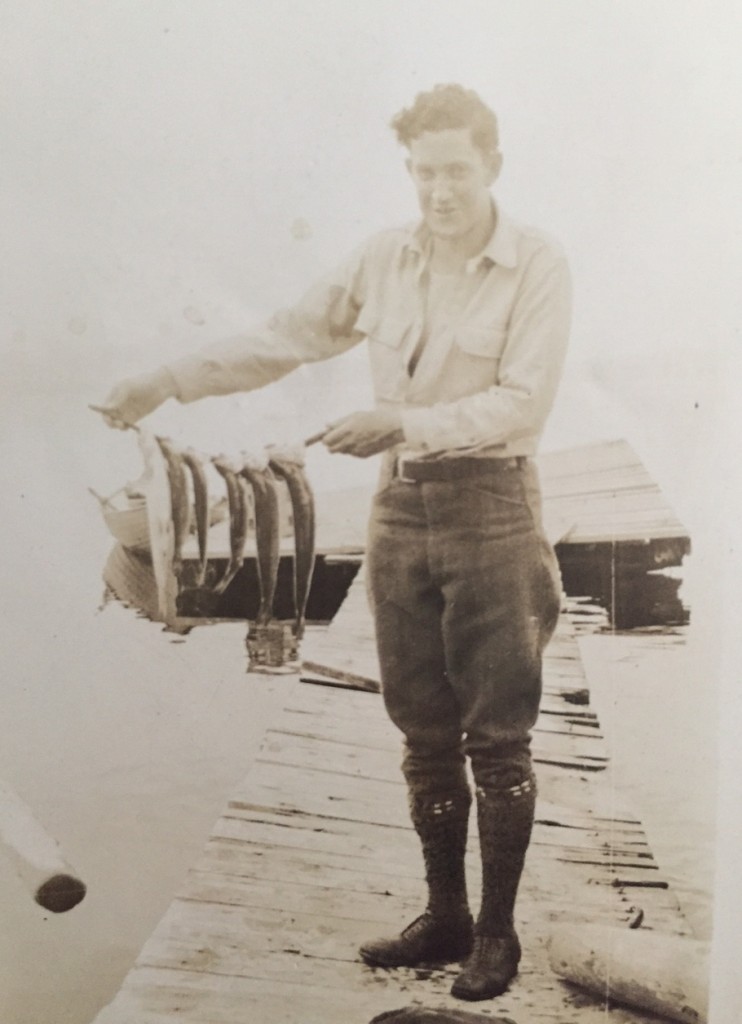 Some of my favorite photos were of my dad’s parents, John Alexander Gillis and Emelia Marie Carrier (1894-1989) as a young couple. These candid snapshots are absolutely charming. 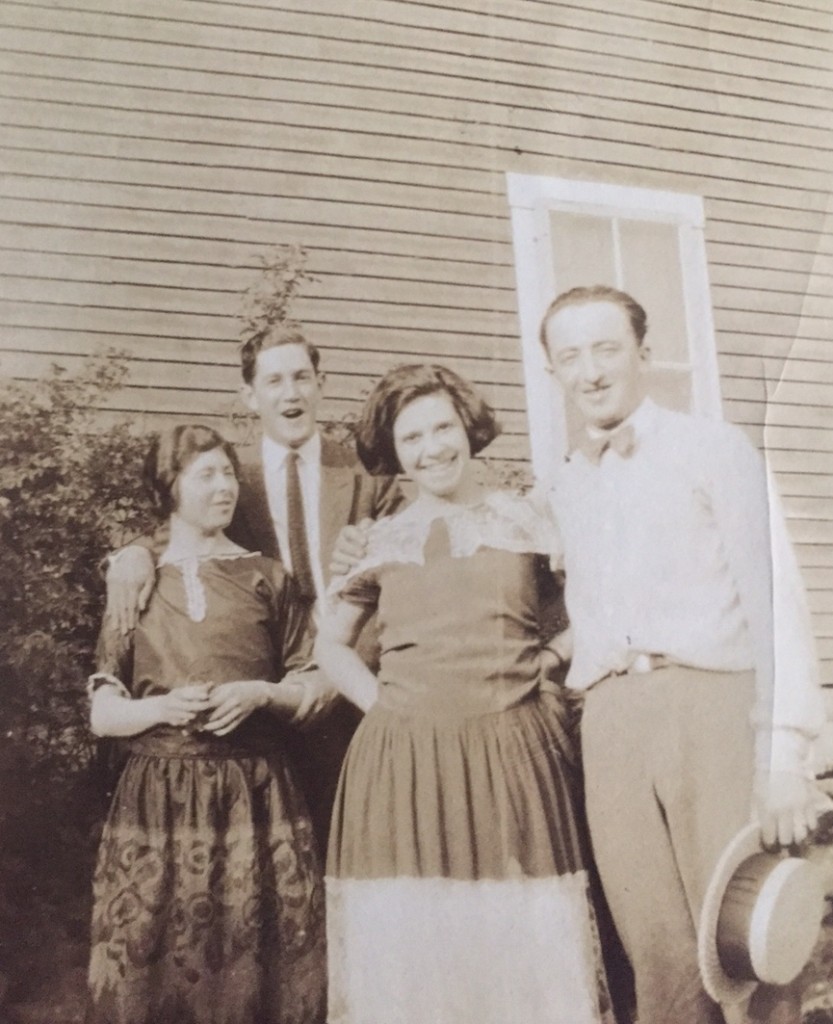 And with my dad, who was their first child to live. 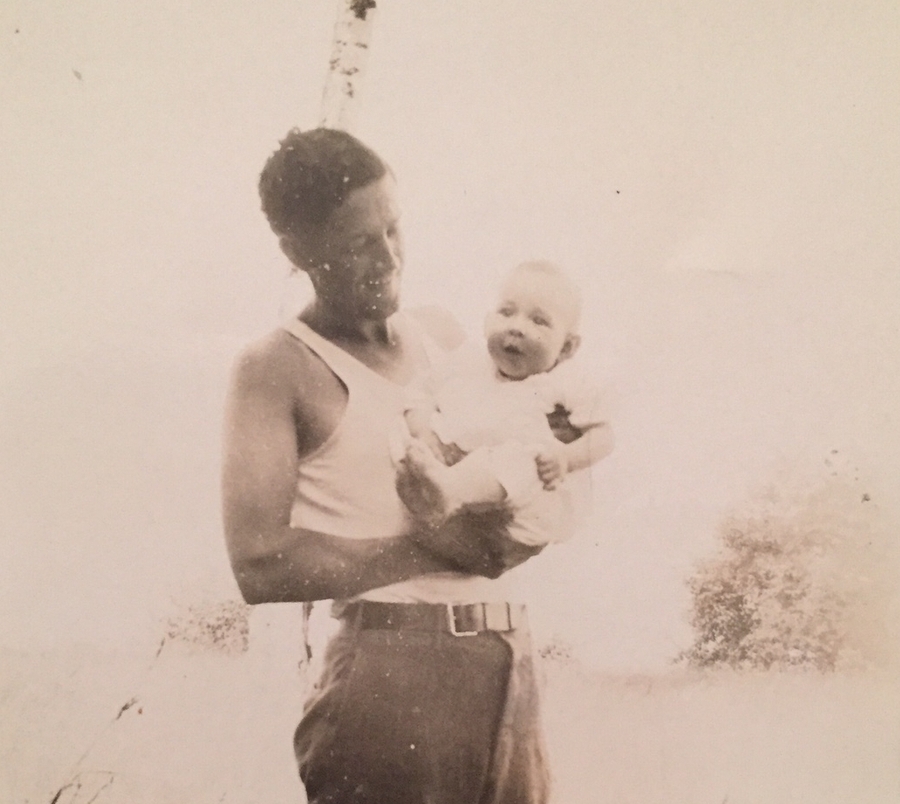 Sandra sent me the earliest photos I have ever seen of Grandmère Emelia, including this 1904 image of her first communion. 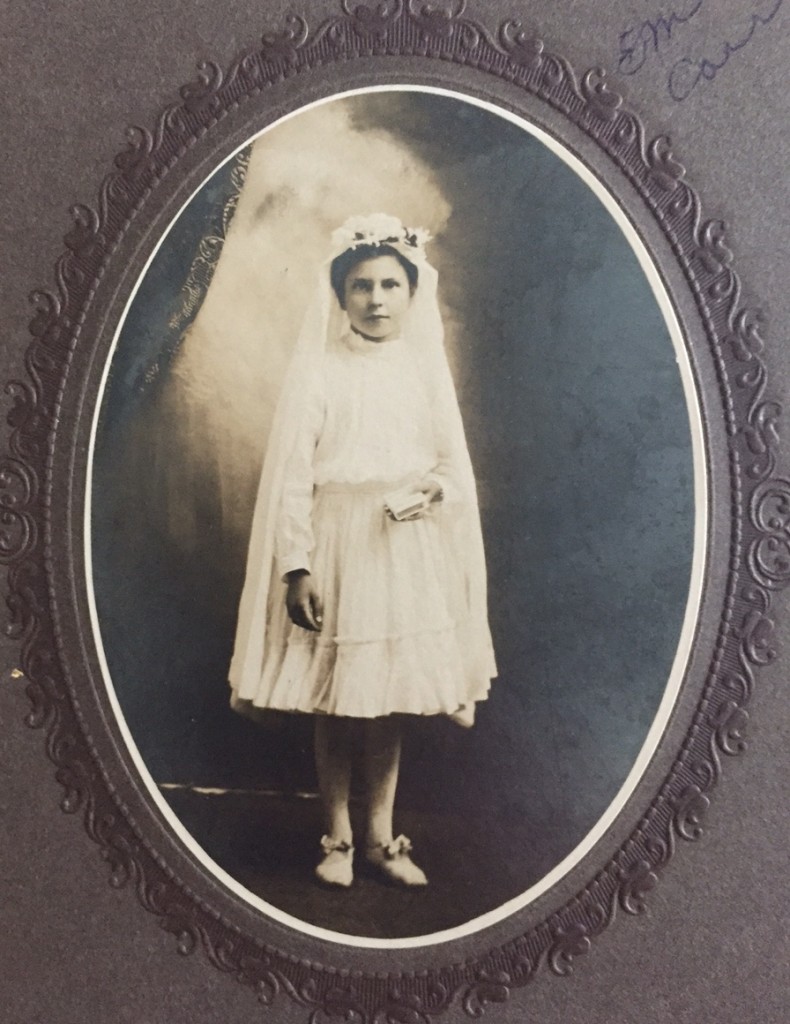 And I love this one with her sister Alma. 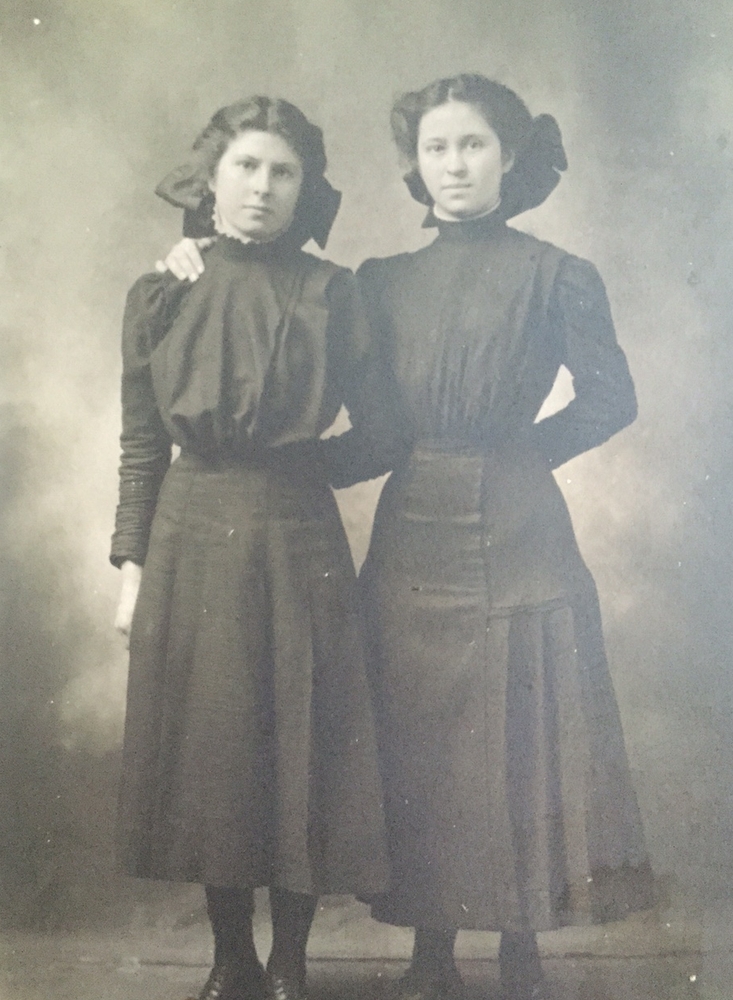 As wonderful as all of these are, the ones that really melted my heart are the photos of my dad growing up. Something about seeing your parent being loved and cherished. . . I feel changed by it. 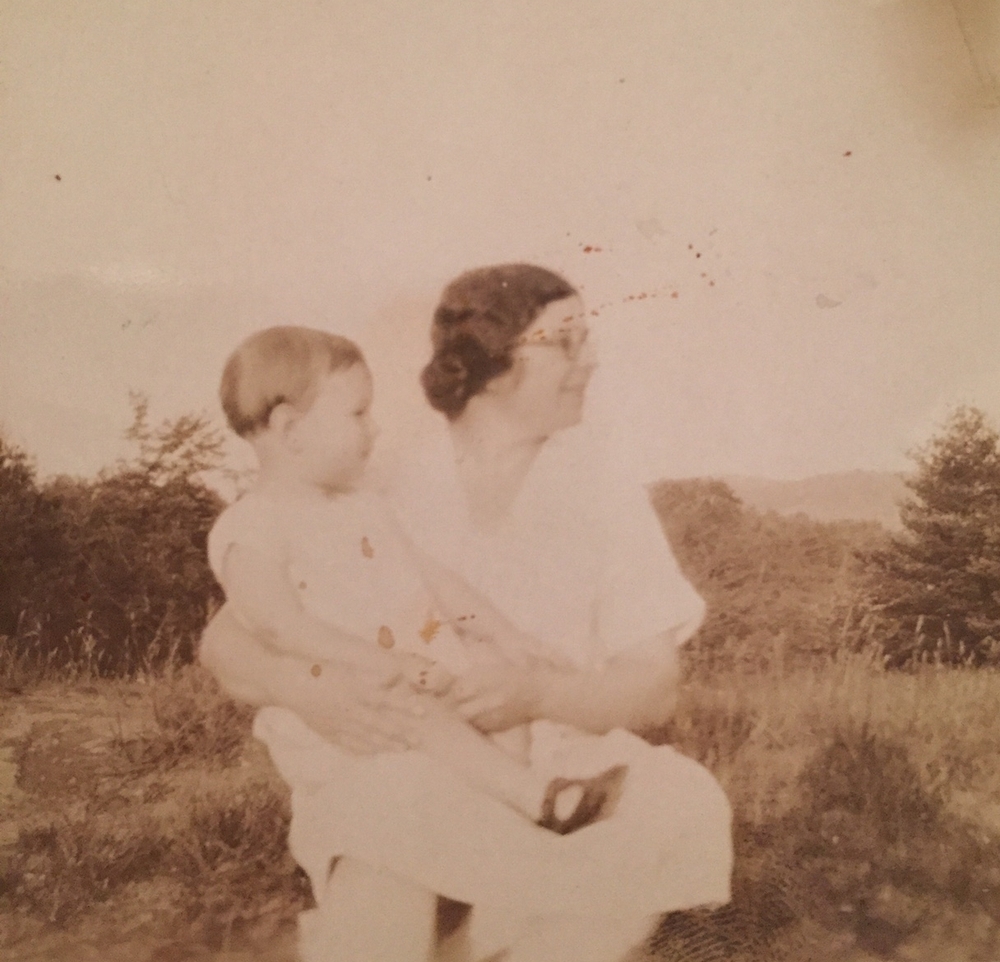 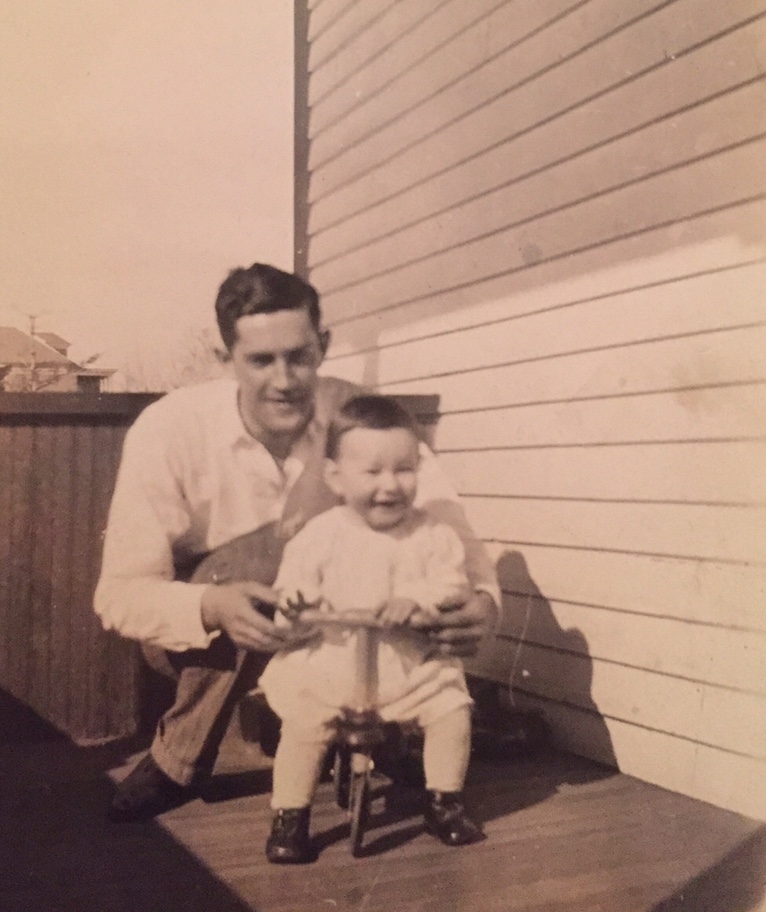 There were so many winter pictures of my dad. Apparently you can take the boy away from the Maine snow, but you can’t take the Maine snow out of the boy.
My fondest childhood memories include my dad pulling our sled behind the Volkswagon for endless runs down Paulina Mountain. 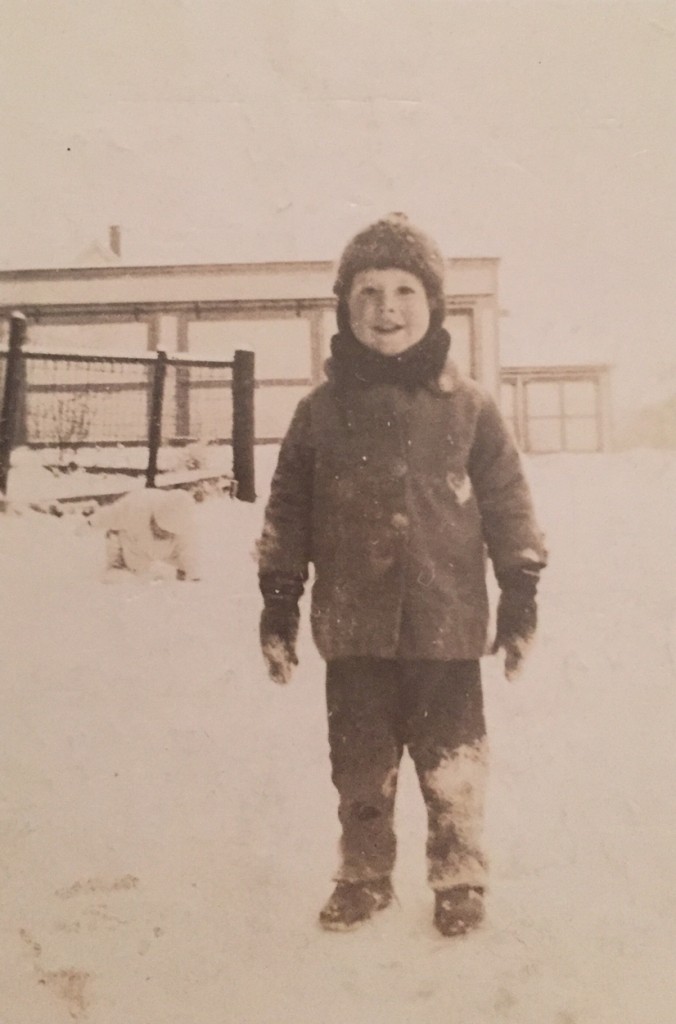 This was just a sampling from each category of photographs. I am so grateful for each one of them. The scans also included a photograph of Uncle Ena in his WWI uniform and an 8 page letter that he wrote to his father Camille from France. 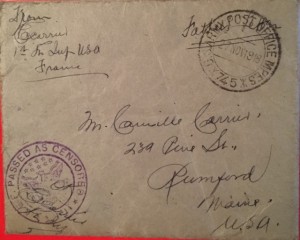 So, what are the take-aways from this story?

1. Never, ever throw away family memorabilia. If you don’t want it, find someone who does or take it to the nearest archive or library.

2. Preserve what you have and share it. I will never understand the hoarding of family and ancestral information. You can’t take it with you. You honor your relatives’ memories by teaching your loved ones about their history.

3. Post what you have on social media. My cousin found me via my Pinterest boards. I also have images posted on History Pin and I regularly search surnames on and post images to Twitter. Don’t give up on making a connection. Share photos on FamilySearch, Ancestry, a family blog, What Was There, or numerous other online outlets.

4. Research your family history. Your capacity to feel love, appreciation, and empathy will grow because of it.

Love you, Dad. Thanks, Sandra!

Feature image: Some school portraits of my dad through the years.