There’s a new archival exhibit at the Kingsport Public Library. From the Boat Yard era to Modern Kingsport, churches have played an important part of town history. This post is dedicated to my late friend Michael Frazier who was the music minister for Holy Trinity Lutheran Church in Kingsport, TN, and passed away in January 2013. I thought of Michael the entire time I worked on this exhibit. Michael loved the people and music of all religions. He had such an appreciation for the contributions each one makes to society. If he were here, today, I would say, “This is for you Michael. Thank you for all you have taught me!”

I thought it might be interesting for readers to see a bit of the process of curating an exhibit so I have snapped a few behind-the-scenes pictures for today’s blog.

I started by using the Archives website search engine and entering the term “church.” 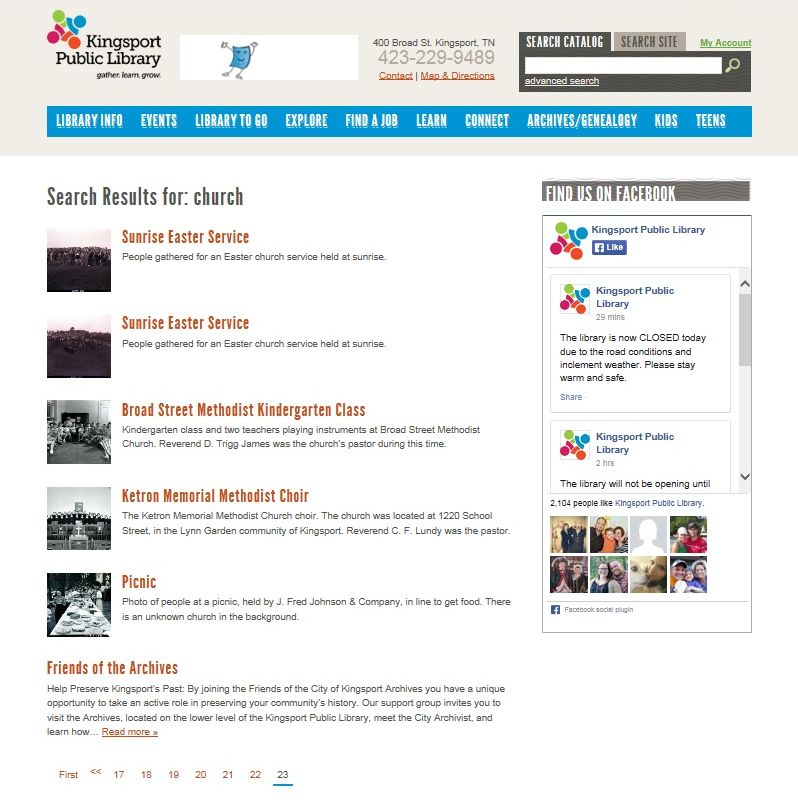 I got 23 pages of finding aids and photographs as a result.

After reading the descriptions within the finding aid of each collection, I made a list of 25 and noted the box and folder number for the contents I was interested in. After printing the list, I grabbed a cart and hit the archival stacks. It took about 10 hours to to go through each collection, pull the items I wanted, make a note of their location on my list, and leave a notated book mark in the box. More than twenty churches are represented in the exhibit.

Next, I transfered the measurements of the display cases to work tables and marked the parameters with rulers. Then, I layed out the exhibit items, leaving room for narrative labels, and fussed with placement until I was happy with the effect. 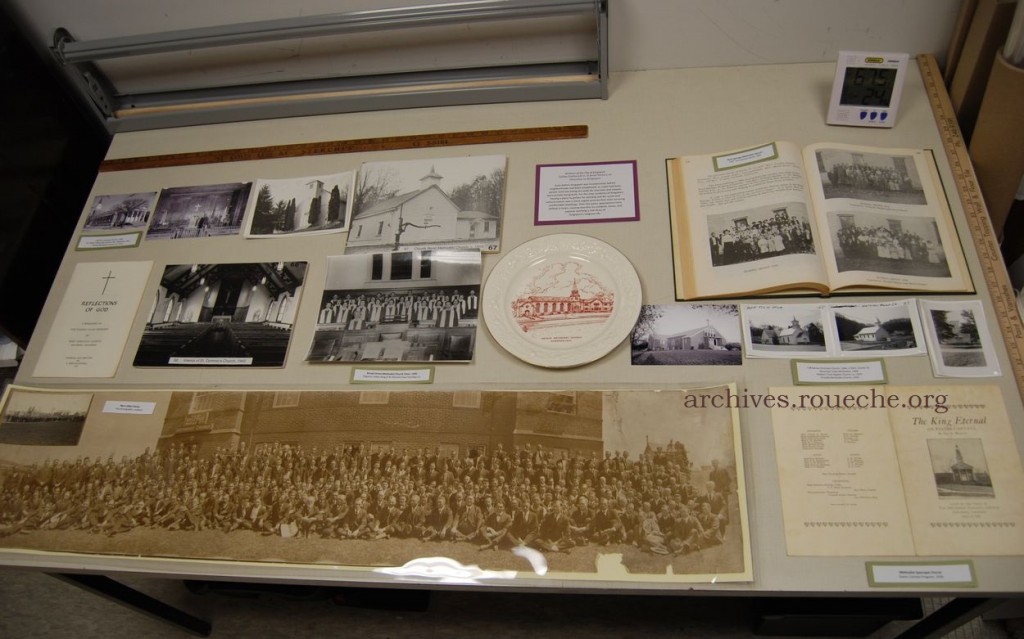 Working exhibit for case No. 1. 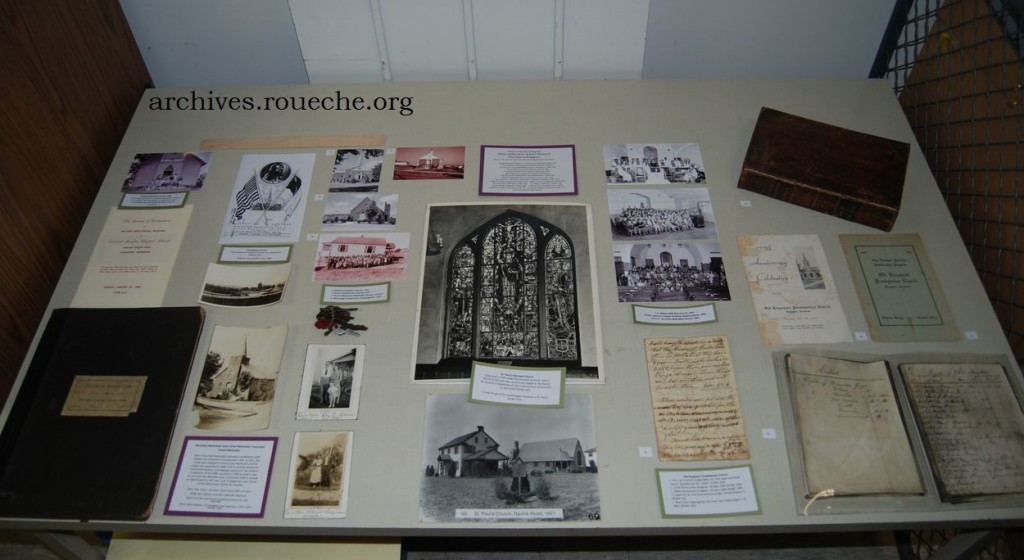 Working exhibit for case No. 2.

Ultimately, after cleaning the glass and removing any lint from the velvet, I installed the exhibit. Sometimes when I install a new exhibit, I handle priceless items and so I am very grateful to the library security guards who’ve made it a practice to stay very close by while I work.

Exhibit case no. 1 to the left of the main floor elevators.

Exhibit case no. 2 to the right of the main floor elevators.

As usual, I developed a few favorites while curating the exhibit. How interesting to learn the stories behind First Methodist and Broad Street Methodist combining, or how Maple Street and Fairfield Methodists merged not only congregations, but names, as well, and became Mafair Methodist. In the early 1800s of the Boat Yard days, a group of believers gathered, eventually secured a minister and founded what we know, today, as Old Kingsport Presbyterian Church. The items the archives has representing their history are more than worth a visit to the archives. 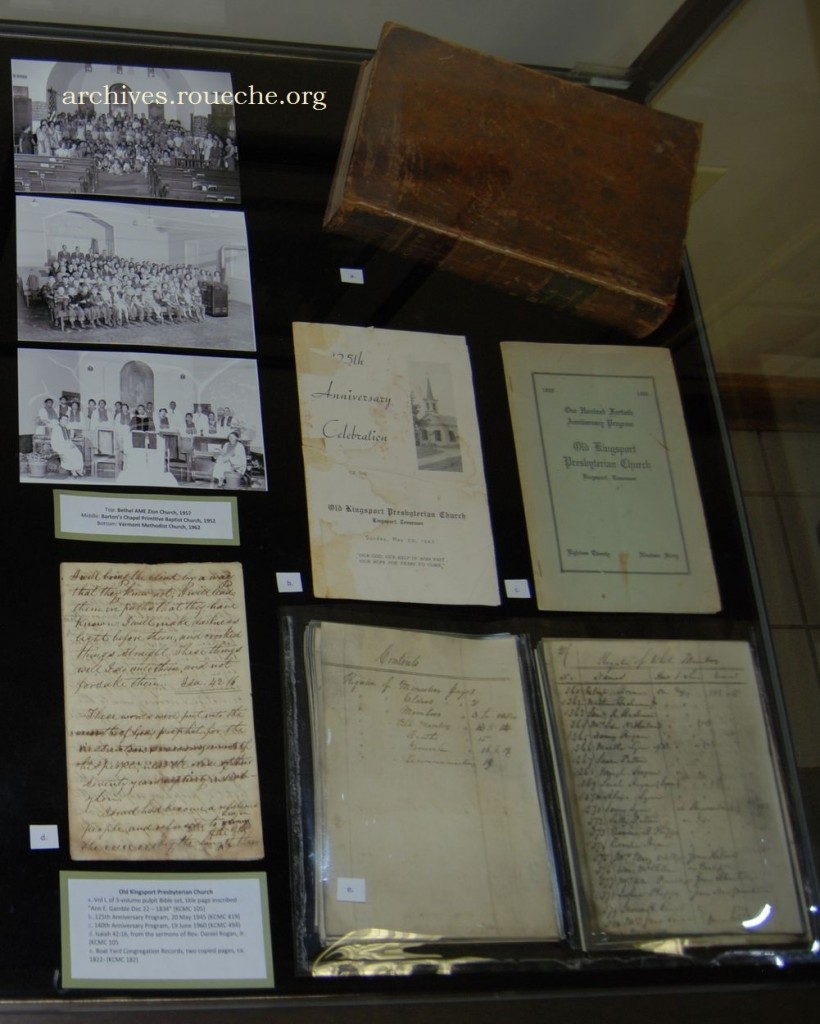 Among the items representing Old Kingsport Presbyterian are one of Rev. Daniel Rogan’s handwritten sermons, copies made from their very first church registry, a pulpit Bible, and programs from their 125th and 140th anniversaries.

Many of Rev. Rogan’s sermons are housed in the Reverend Daniel Rogan, Jr. and Family Collection, KCMC 105. Most are in excellent condition, quite legible, fascinating, and date between 1846-1867. Rogan died in 1881. 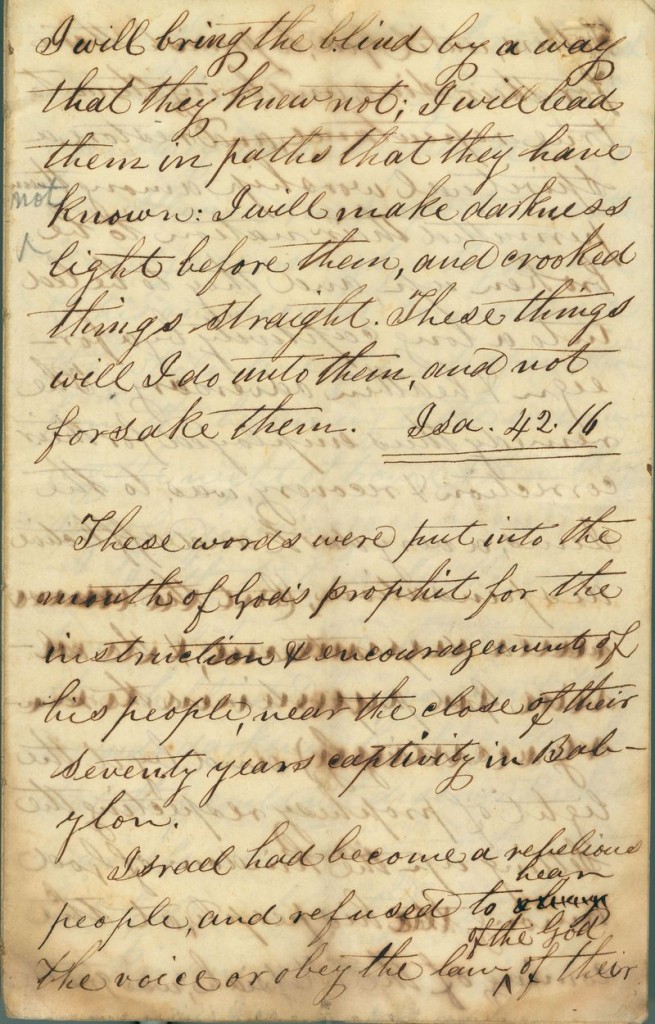 Isaiah 42:16. Rogan writes: “These words were put into the mouth of God’s prophet for the instruction and encouragement of his people.” 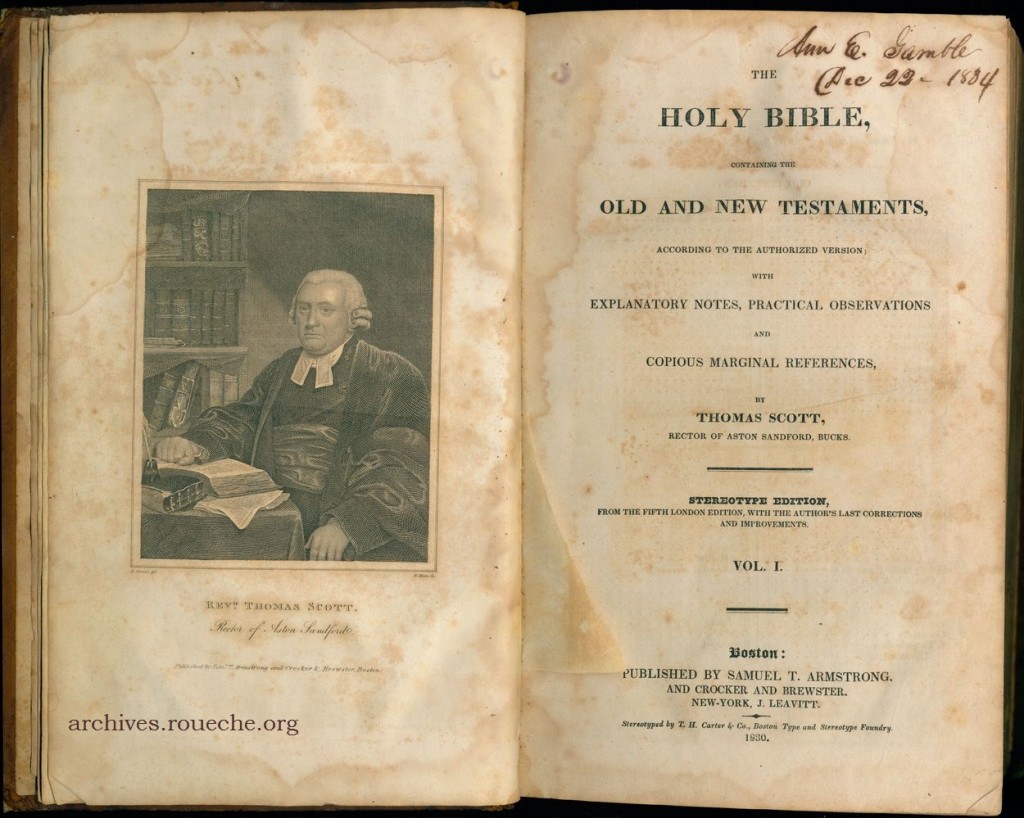 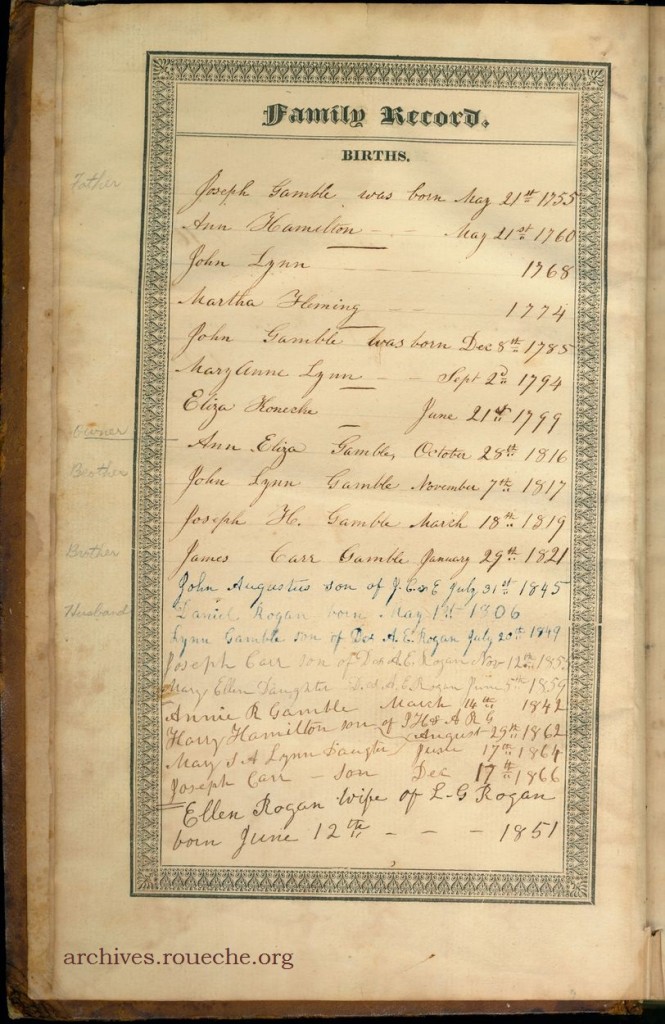 The Archives of the City of Kingsport is fortunate to have the studio collections of several early Kingsport commercial photographers such as McNeer, McDowell, Swann, and Peirce. They had a way of capturing congregations, choirs, ministers, and children that illustrated their characters and personalities. 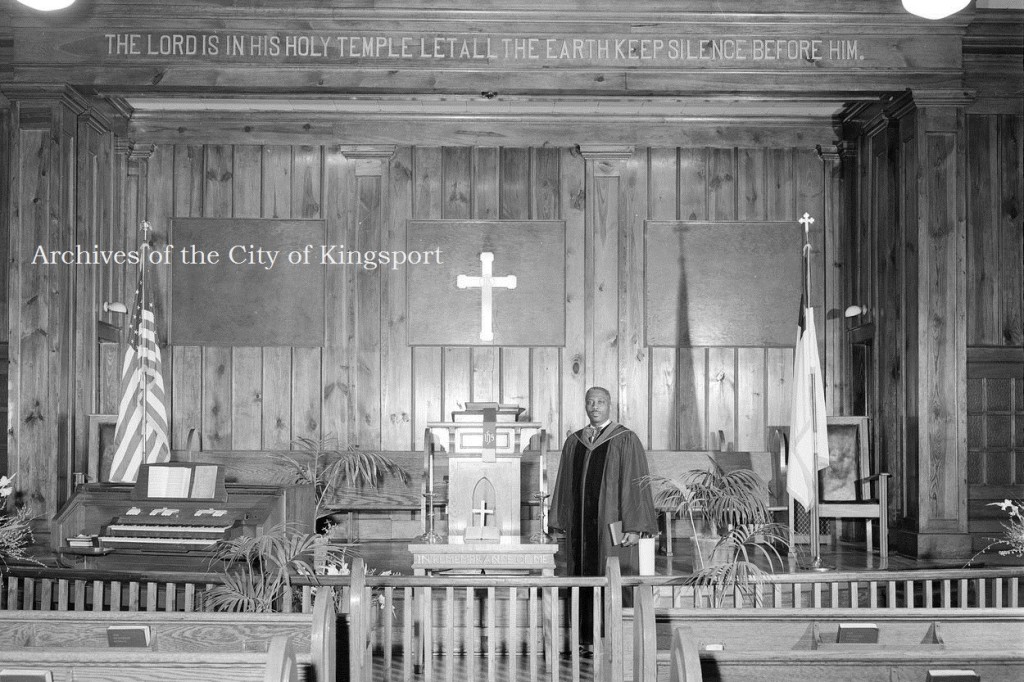 Rev. Manning of St. Mark’s Methodist. I love the quotation on the wall, the solemnity of the sanctuary, and the regal stature of Rev. Manning in this portrait from 1951. 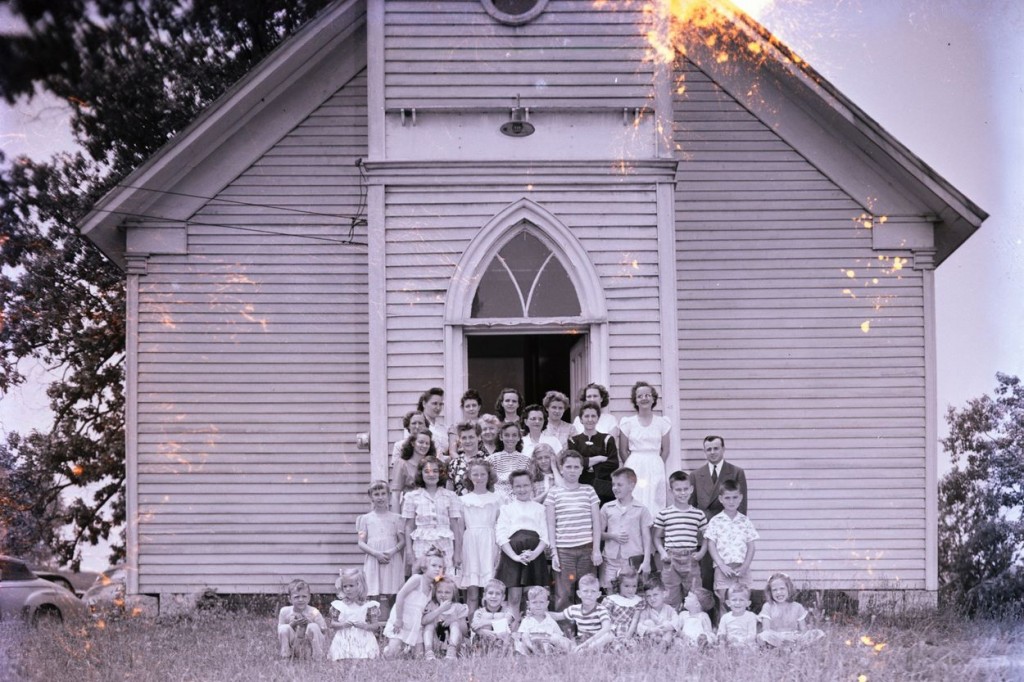 Fairfield Methodist Church students. Fairfield was located on Eastman Rd. and was a precursor to the current Mafair Methodist on Center St. 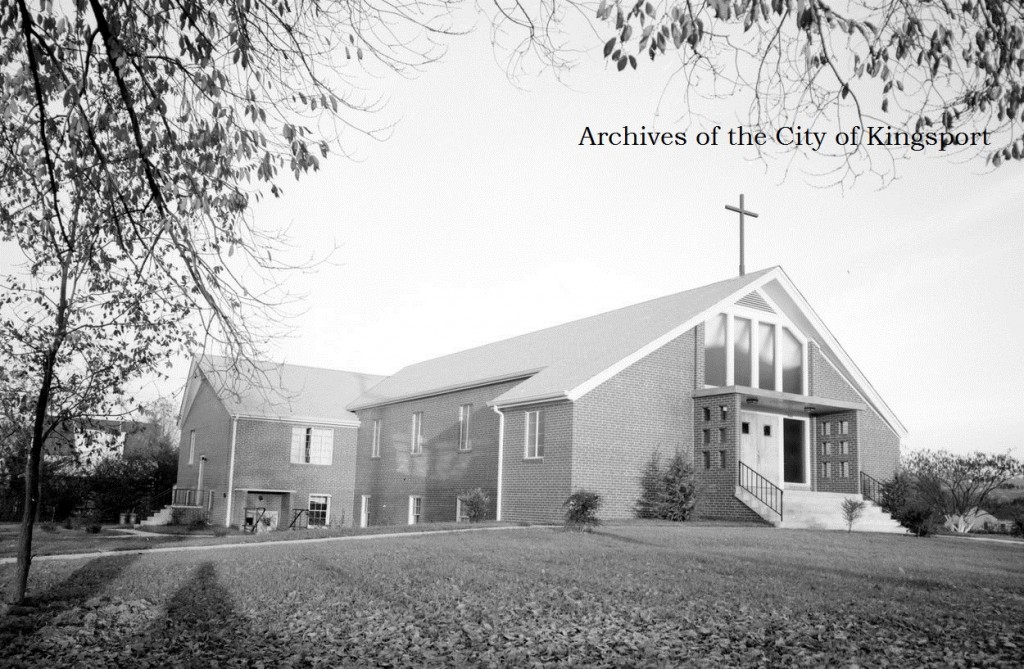 Belvue Christian is a church you pass every week on E. Center St., but look how beautifully photographer David Peirce captured it in 1960.

Lastly, I spent entirely too much time caught up in the history of Crossroads United Methodist Church. Locals may remember it started out as West View Park on the corner of Stone Dr. and Fairview. Established in 1932, the chapel was dedicated in 1942, underwent a name change to Stone Dr. Methodist in 1961, and was expanded in 1969. It was finally decided that a declining community population and expanding highway necessitated a move to the Allandale area of town. I have put the keys in the exhibit to represent these many developments in the church’s story. (I guess I could have included a prescription bottle, because on that corner, now, stands a Walgreen’s.) 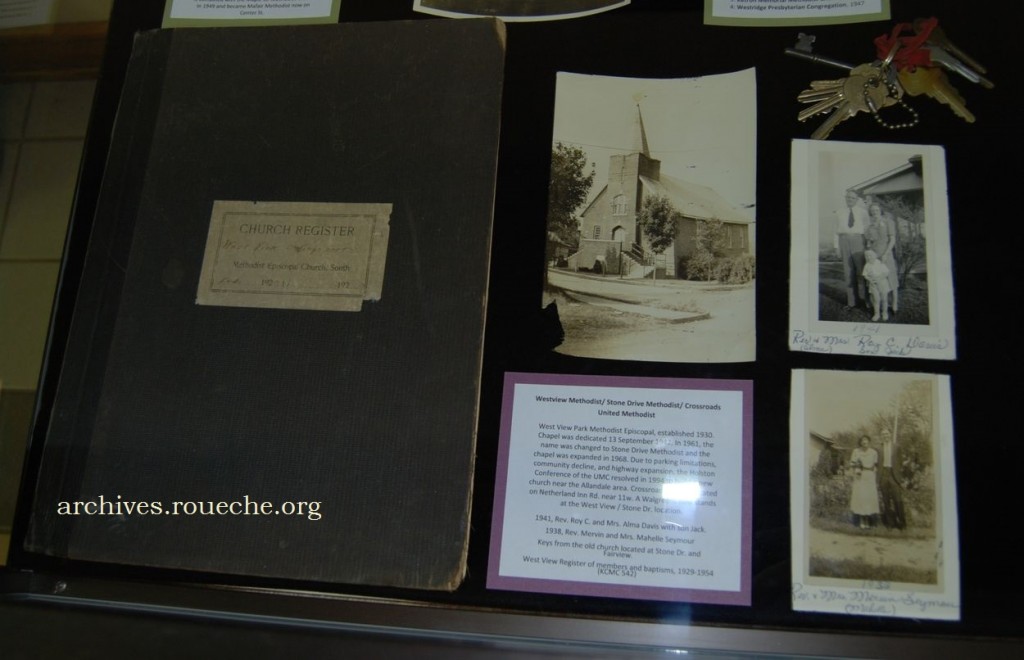 Items in the exhibit include the church’s first register, photographs of early ministers, and an original photograph of the first chapel.

If you want to know more about a Kingsport church’s history, please visit the exhibit, make use of the archives’ website, and view their Pinterest board on the subject. “Safely Gathered In: A Brief History of Kingsport Churches” will be on display until early May, 2015.

2 Responses to Kingsport: Safely Gathered In