Genealogy: Reading between the bars

I have had access to the 1910 US Census record for my great grandfather for a long time. Five of John J. and Matilda Peterson Gillis’ then seven children were living at home. That was very helpful information to me. The 1910 census also documents a person’s place of birth, as well as the nativity of his or her parents, and the year of immigration, if applicable. The answers to these questions can help a genealogist know where to search for the preceding generation.

This record for Rumford, Oxford, Maine was enumerated on 12 May 1910. John (1866-1951) and Matilda (1872-1933) had already lost a daughter and a son to early death: Matilda Mary, and William. (Notice Matilda’s line, columns 10 and 11.) As sad as that is, by tracking a family through consecutive censuses a genealogist can learn when he or she should be looking for death and birth records. This can help ensure that no family members are forgotten.

Now that so many records are being digitized and added to online databases like Ancestry.com, MyHeritage.com, and FamilySearch.com, it is vitally important that researchers click through to read the images themselves and not rely on the summaries of indexers. Week after week I find examples of people being included with the wrong household or indexers missing handwritten addendum on documents that clarify or correct information. Today, I am sharing one example of the benefits of reading documents for oneself.

During a recent search for one of my numerous ancestors who are named “John Gillis,” I found a second US 1910 Maine Census. I thought it couldn’t possibly be my John J. Gillis, because I’d had his entry with my records for years. But, I clicked through and began to read a list of inmates in the Oxford County Maine jail enumerated on 18 April 1910. 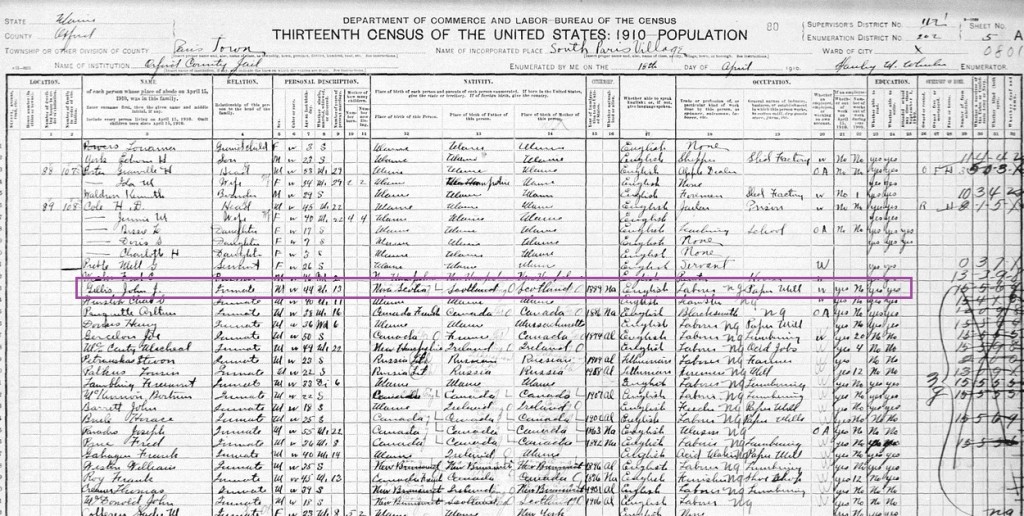 The real defining piece of information that tells me this is my great grandfather is the column that asks “Number of years of present marriage.” Both records list “13” as the answer.

So, what was John J. Gillis, spouse of Matilda Augusta Peterson, doing in the county lock up on 18 April 1910? Maybe he was sleeping off a night on the town, serving time for jaywalking, or perhaps he got caught up in a factory room brawl. I don’t know. But his sentence was of such a short duration that he was home when the census was taken at 503 Virgin St. on 12 May 1910.

I have decided that this is the census equivalent of standing at the far left of a group panoramic photograph, running behind the camera, and getting back in line at the far right just in time to show up twice on the permanent image. One of the many reasons that we should read documents carefully. 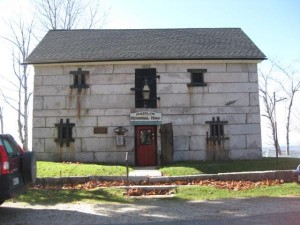 This entry was posted in Genealogy and tagged census, digitized documents, genealogy, Gillis. Bookmark the permalink.

4 Responses to Genealogy: Reading between the bars