In the fall of 2011, as a graduate student in archives, I attended the annual conference of the Society of Tennessee Archivists in Nashville. One of the speakers was John F. Baker Jr., who was presenting his research on his Washington ancestors who had been enslaved on the Wessyngton Plantation in Robertson County, TN. I spoke with Mr. Baker afterwards and purchased his book, The Washingtons of Wessyngton Plantation: Stories of My Family’s Journey to Freedom. Even though I was in school with plenty to read, I started his book and couldn’t put it down. I marked passages and papered the pages with sticky notes. Fast forward to the next summer when I was planning my capstone project and defense paper, I decided Mr. Baker’s book was the perfect example of identity exploration through genealogical research that I would be writing about and so approached him about an interview. He generously agreed to participate.

What is so unusual about the Washington family as regards the family history researcher, is that they kept meticulous records. Not only did they keep records identifying their income and expenses, their crops and harvests, but records identifying their slaves by birthdate, sex, and name (very unusual). The Washingtons were known for not selling off slaves or dividing families. Slave families that were kept together knew their relatives and were able to pass down oral histories. And the most unusual thing about the tobacco plantation owning Washingtons is that they preserved their records from year to year and from generation to generation, all through the civil war, and afterwards. Some records stayed with the family members on the property and many were eventually donated to the Tennessee State Library and Archives (TSLA).

When John Baker first saw an intriguing photograph of a local slave family in his 7th grade social studies book, a photograph that was later identified by his grandmother to be his own kin, he immediately began conducting oral history interviews of his relatives and eventually performed primary research at the TSLA. He made visits to Wessyngton, interviewed the descendants still living there, and studied the documents, artifacts, and landscape of the plantation. 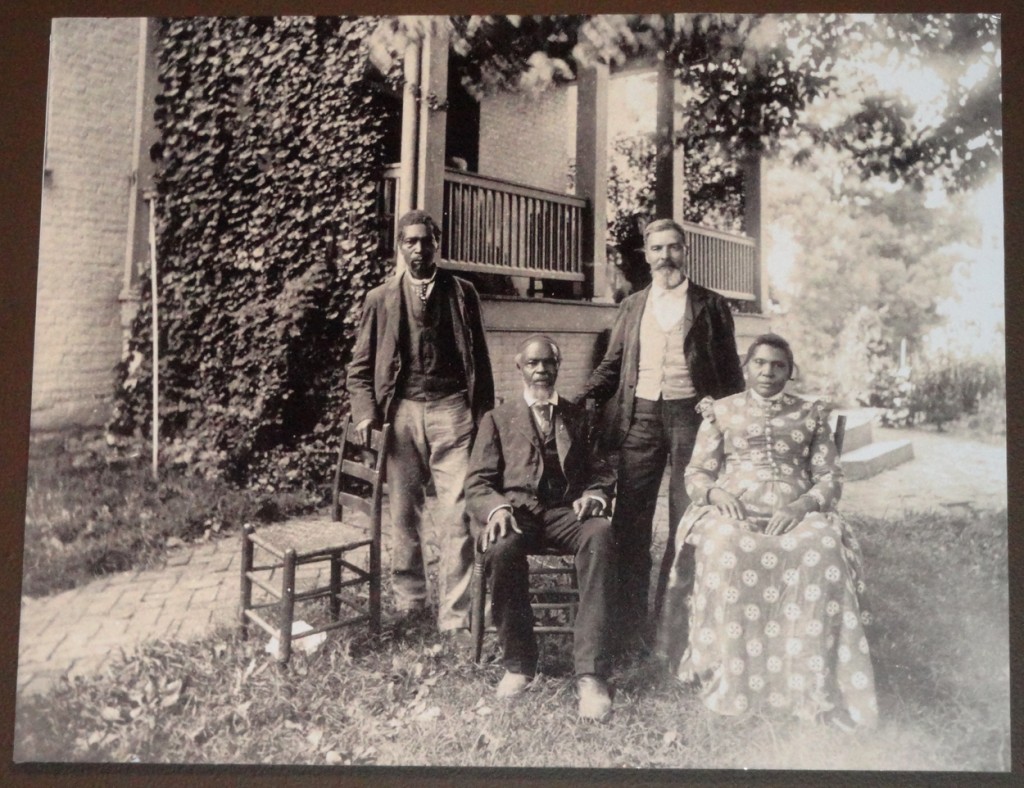 The book dedication reads, “In honor of Emmanuel, Henny, Allen, and Granville Washington, whose photograph led me on a thirty-year journey to discover their stories and those of the hundreds of others enslaved on Wessyngton Plantation.”

Thirty years later, Mr. Baker’s charts, transcriptions, and written narrative bring the Washington Family Papers collection to life for anyone who reads his book, which was published in 2009. Now, the TSLA has organized an amazing exhibit from documents in this collection at the Tennessee State Museum called The Slaves and Slaveholders of Wessyngton Plantation. Attending the exhibit was such a thrill for me. I felt like I was “meeting” the people I had come to love through Mr. Baker’s storytelling. What a great exhibit! It celebrates family love and human perseverance, while honestly portraying the heartbreak of slavery. The museum is free and the exhibit is open until August 31, 2014. GO!

Please click on the images below if you want to read the exhibit descriptions. 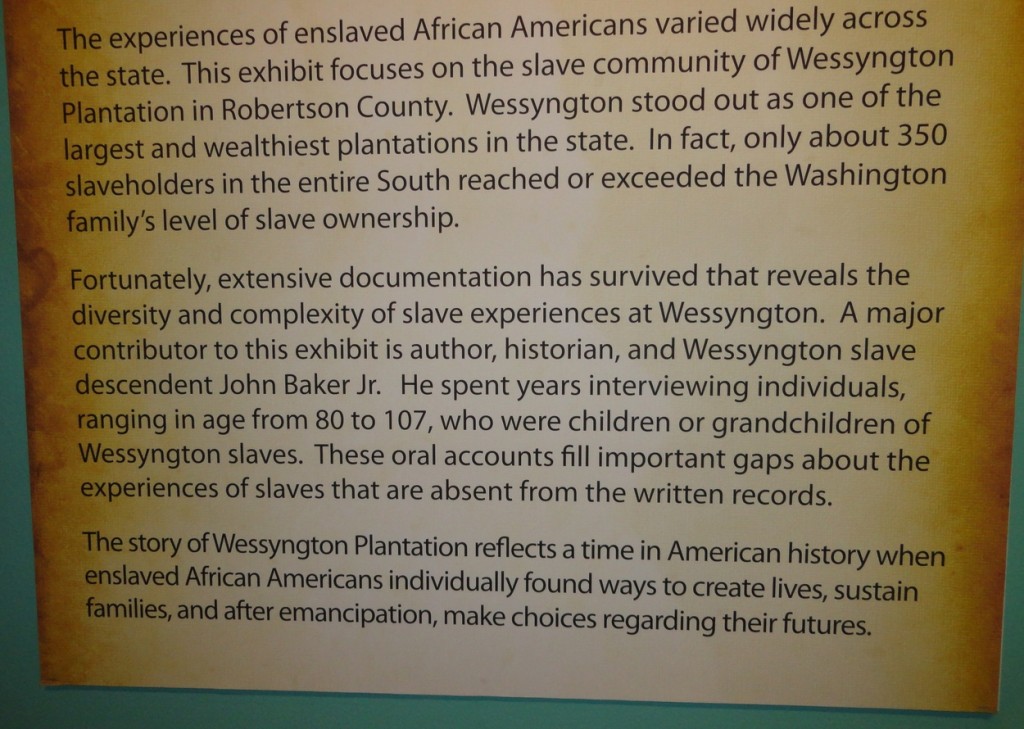 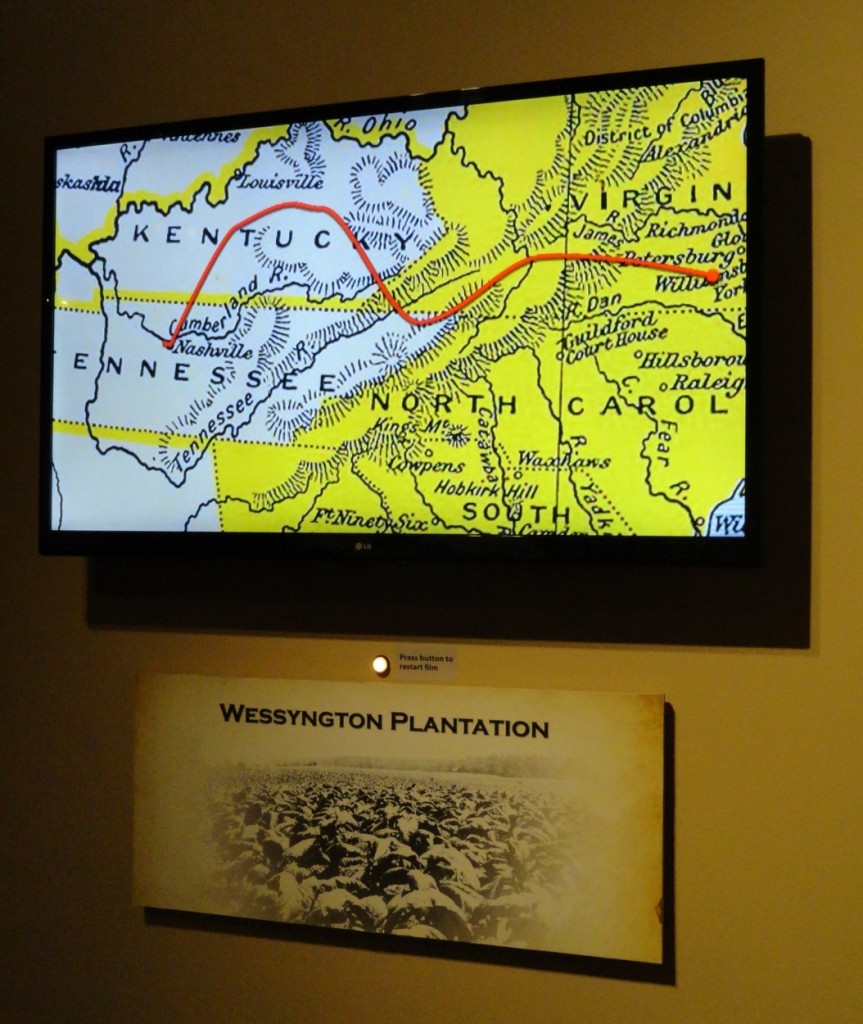 The Washington mansion and family members at Wessyngton. 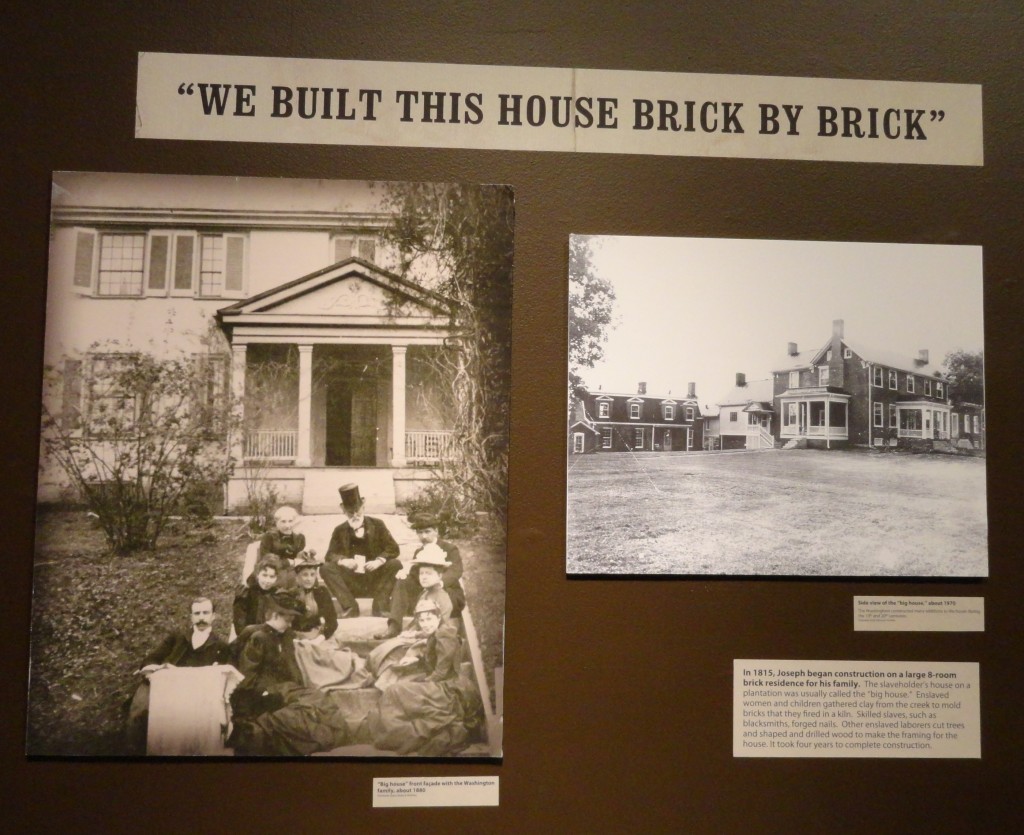 Two examples of the record-keeping habits of the Washingtons. 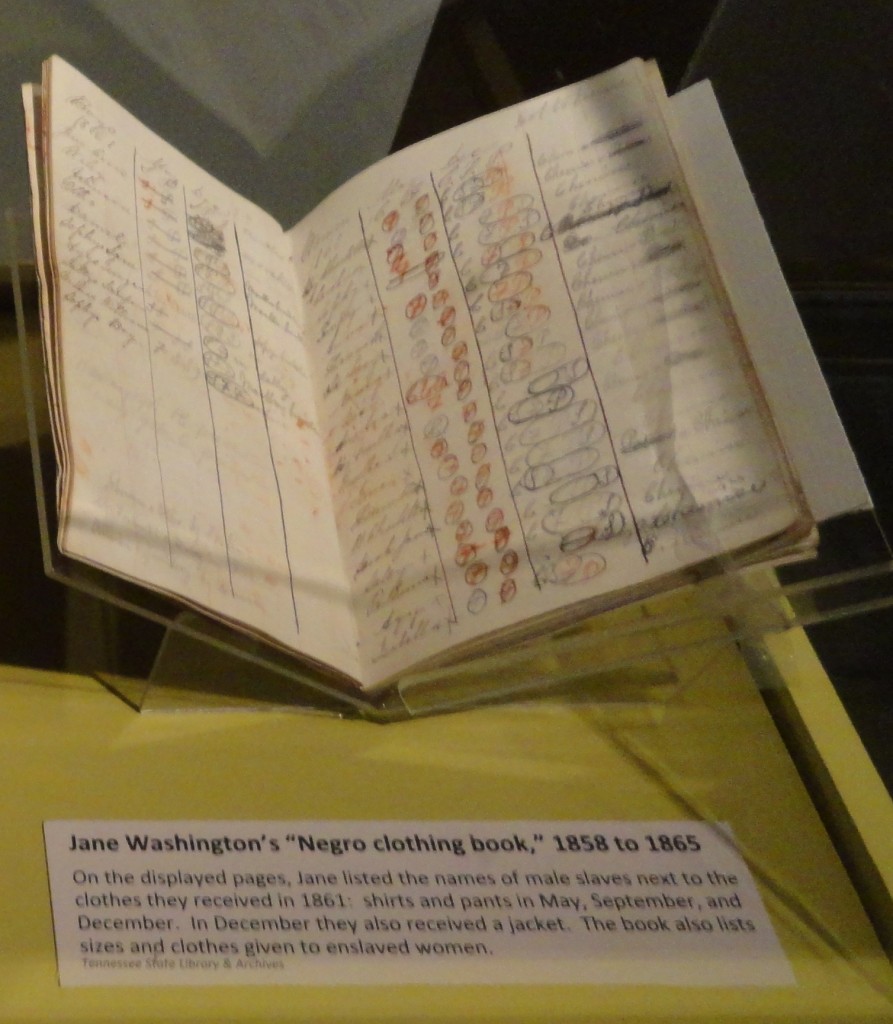 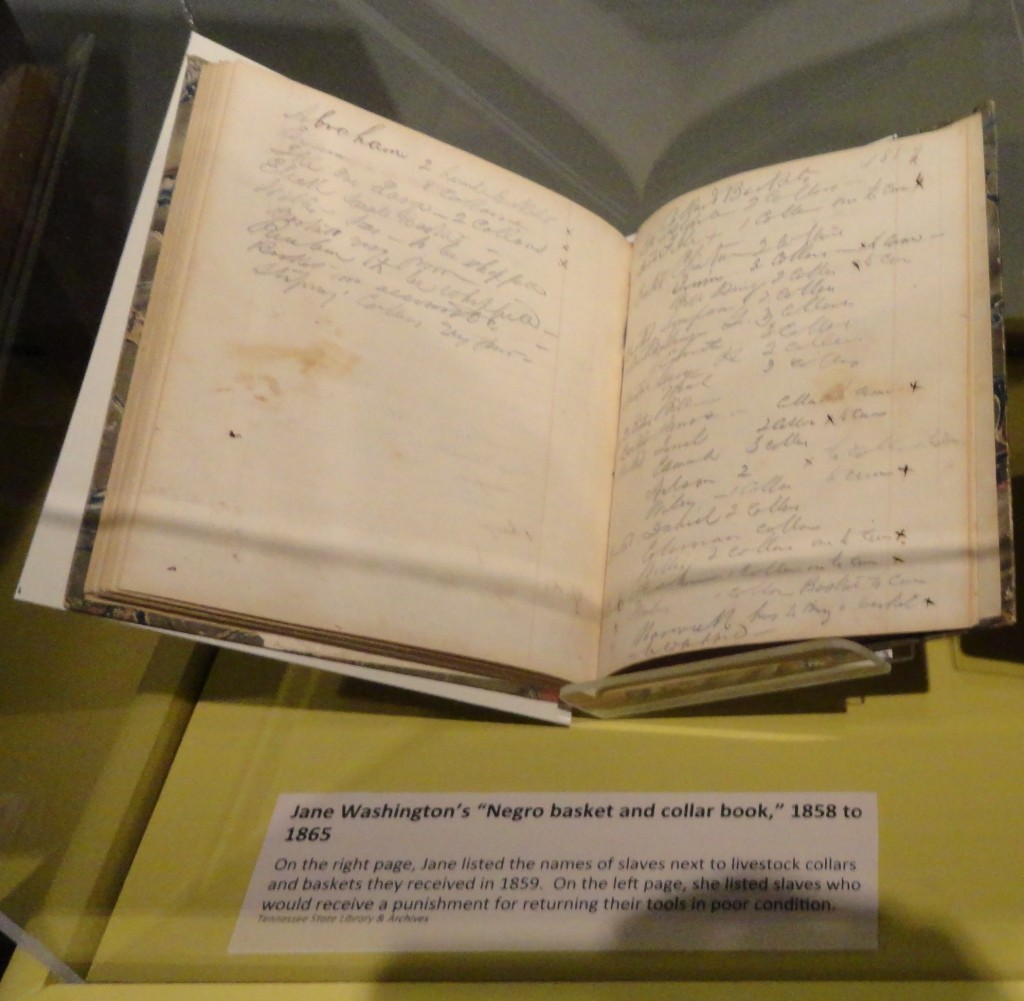 Two practices at Wessyngton helped enslaved individuals purchase land after the war: the task system and the ability to earn and keep money made on days off. 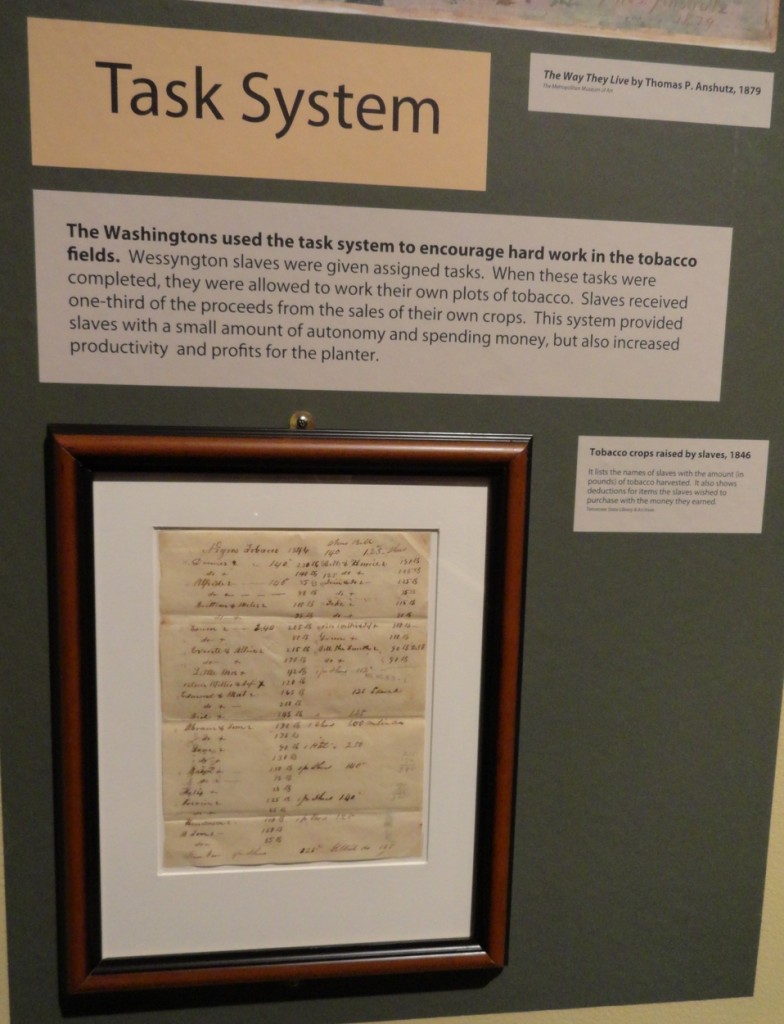 Granville Washington was fathered by Joseph’s son George at age 15. 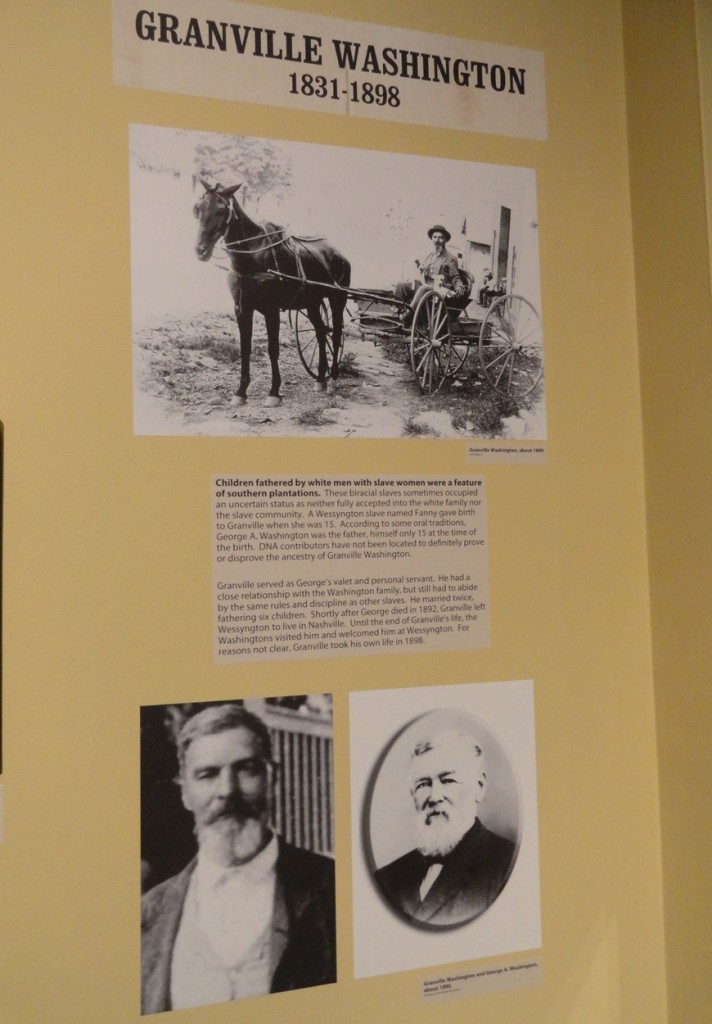 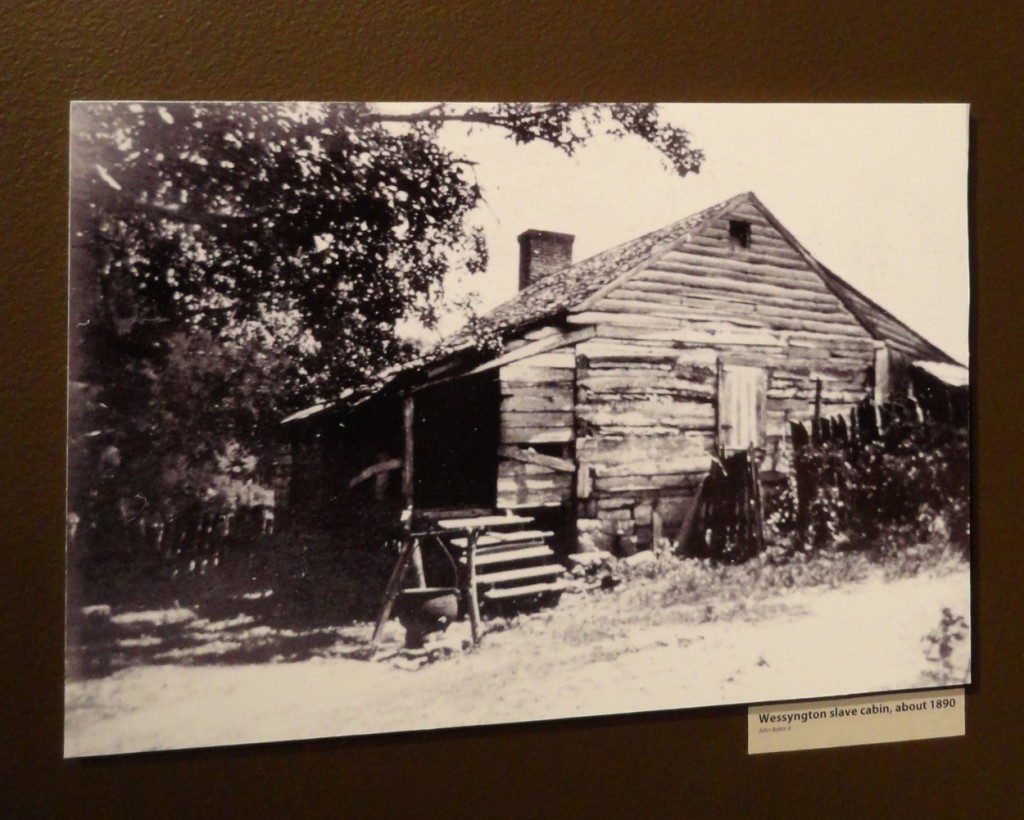 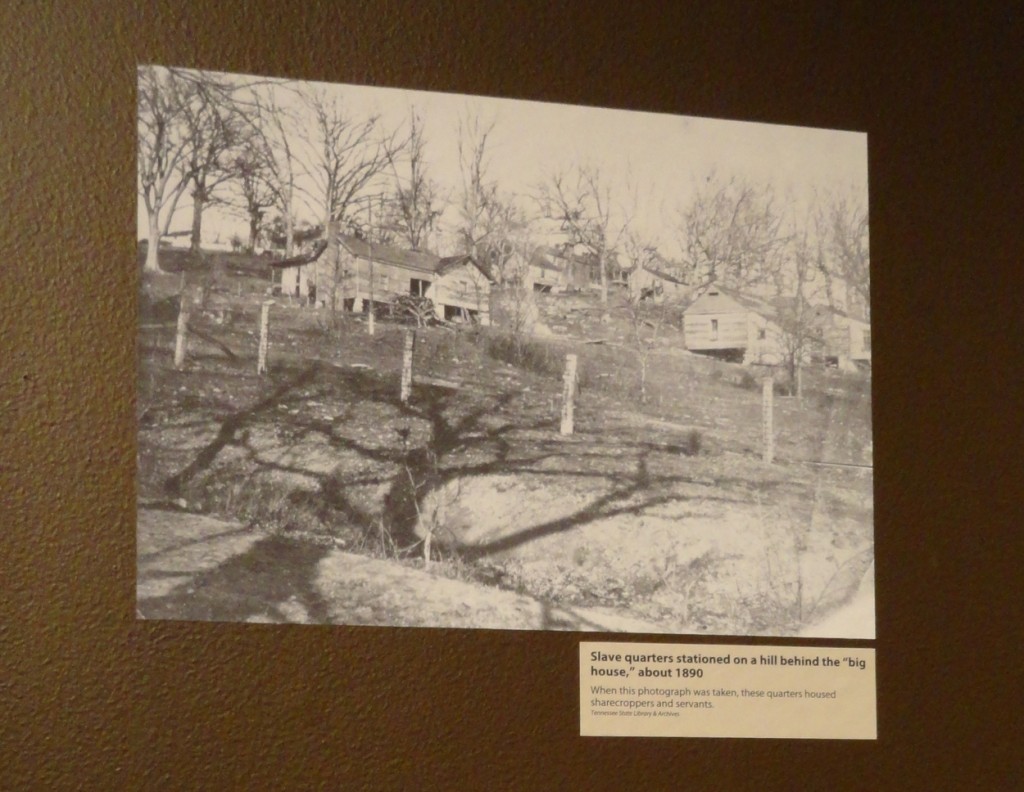 John Baker was blessed with a genealogist’s heart from a very early age. We all benefit, along with his family, from the interviews he conducted with aging relatives before they passed. 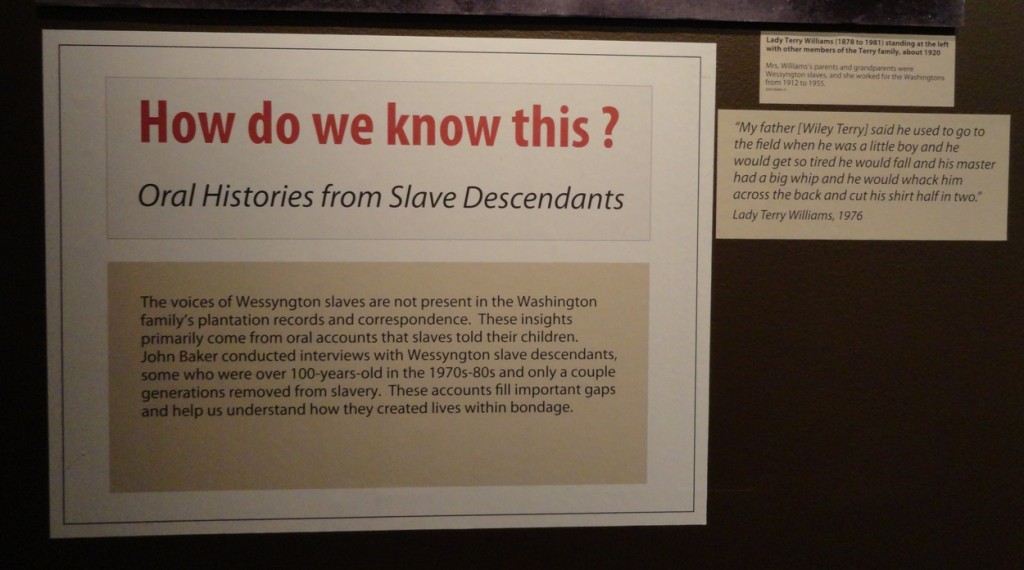 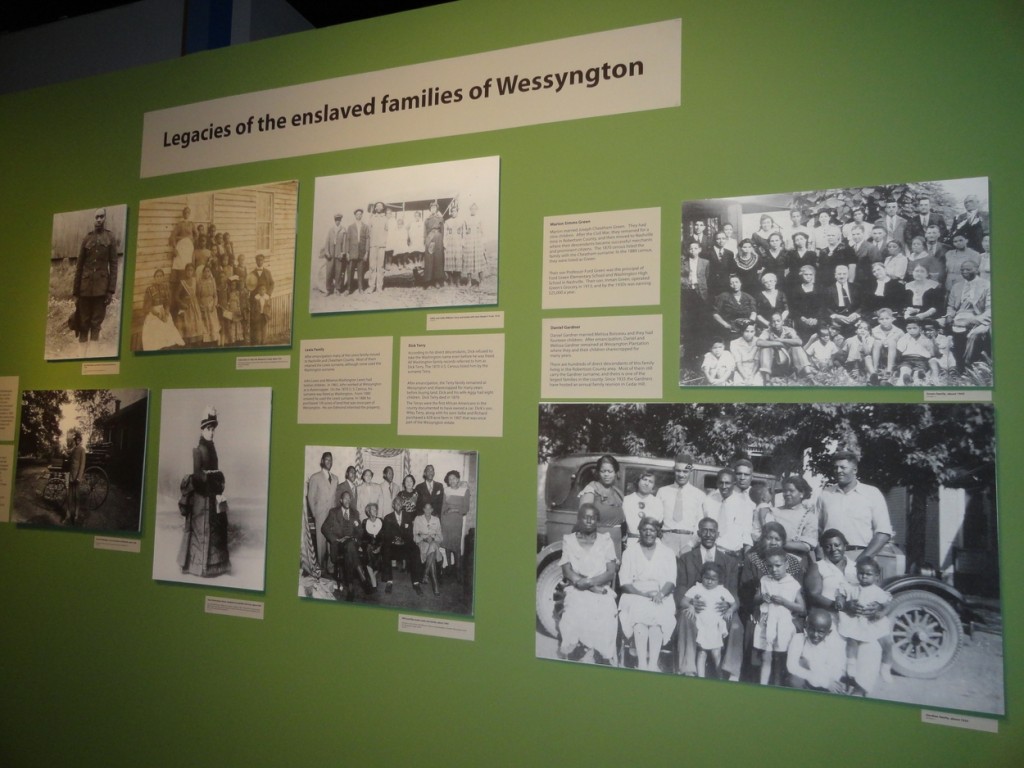 I have only captured a tiny portion of this wonderful exhibit. There are interview recordings to listen to, audio and video narratives performed by actors, and numerous photographs, documents, and artifacts to see. 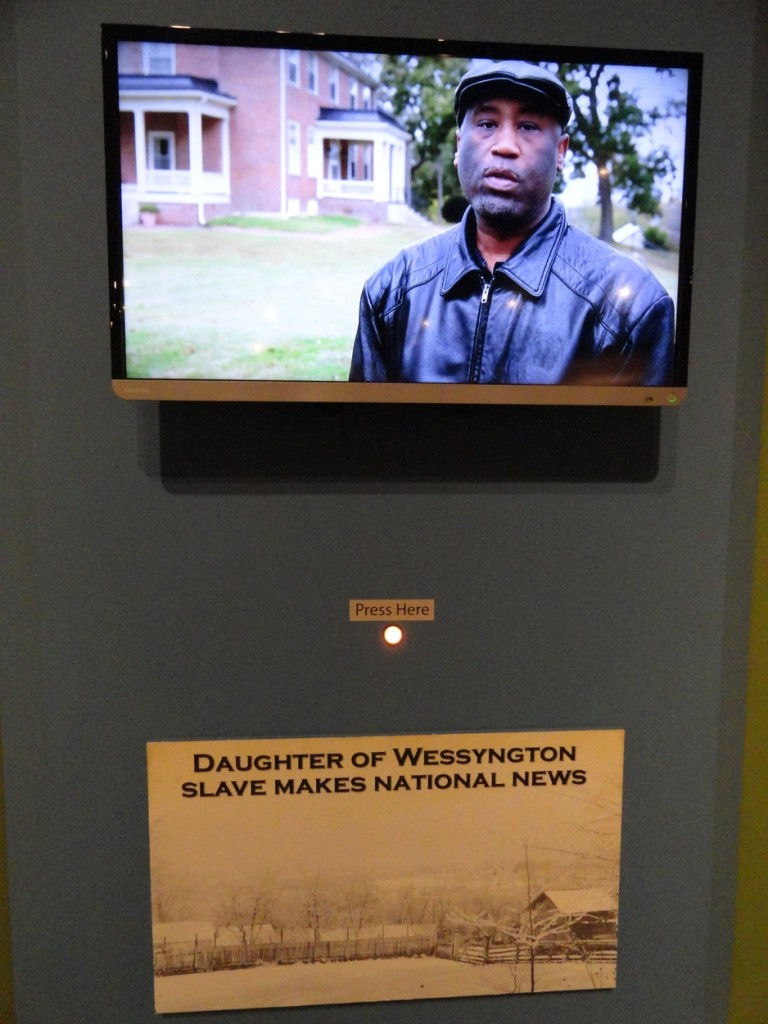 John Baker retelling the story of relative Ann Nixon Cooper who at 106 cast a vote for the first African American president and was mentioned in Barak Obama’s 2008 acceptance speech.

I will forever be grateful to Mr. Baker for his generosity, his example of family love, and his inspiring research. The work of so many people inspired and guided my graduate work and continue to motivate me, today. 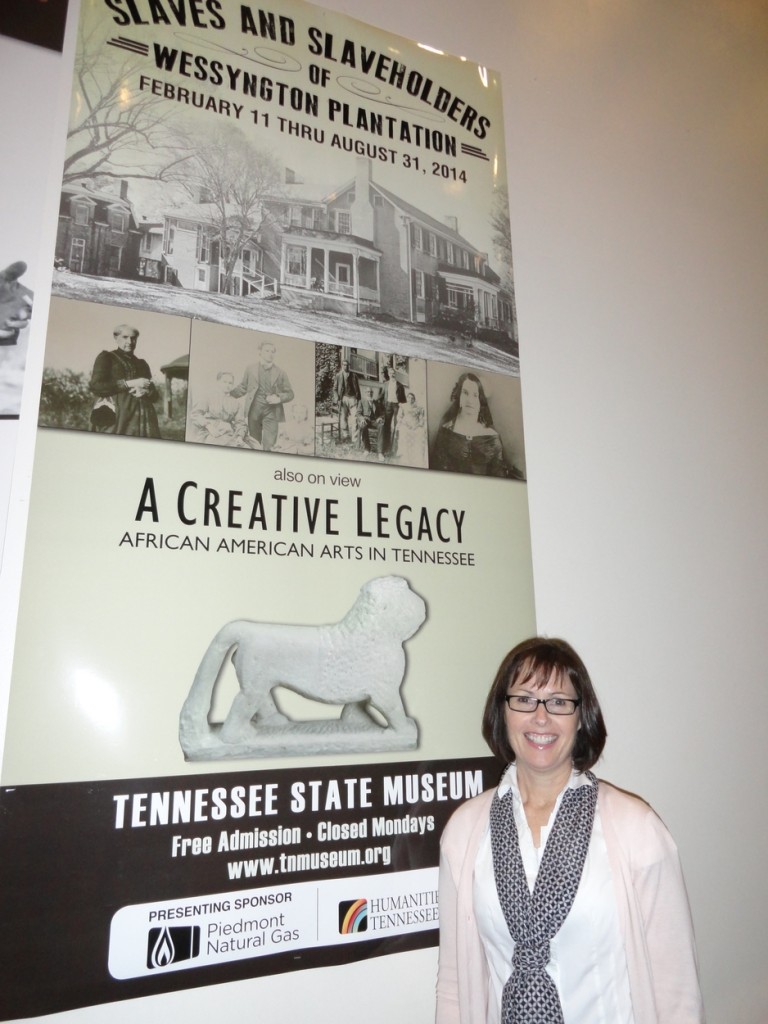 “I feel I have a responsibility to my ancestors and all the others from Wessyngton to let their descendants know who they were and what they stood for and to take advantage of all the opportunities not available to them to live their best lives.” -John Baker Jr., 2012

To read my complete interview with Mr. Baker see my Master’s defense paper, “Tell me who I am”: Finding Personal Identity and Connections to History Though Genealogical Research and scroll to Appendix B, page 34.