2017 marks the 100th anniversary of the City Charter for modern Kingsport. Celebrations kick off with a party at the Farmer’s Market on March 2 at 3:30. But, we’ve started celebrating early at the archives with a new exhibit!

The “Kingsport 100” exhibit is in the main lobby of the Kingsport Public Library. There is a 100-year timeline, a blue print from the original town plan, and portraits and biographies of important contributors to Kingsport’s early years. It’s all topped off with colorful bunting trimmed with vintage birthday party images because, sometimes, it’s good to just HAVE FUN! 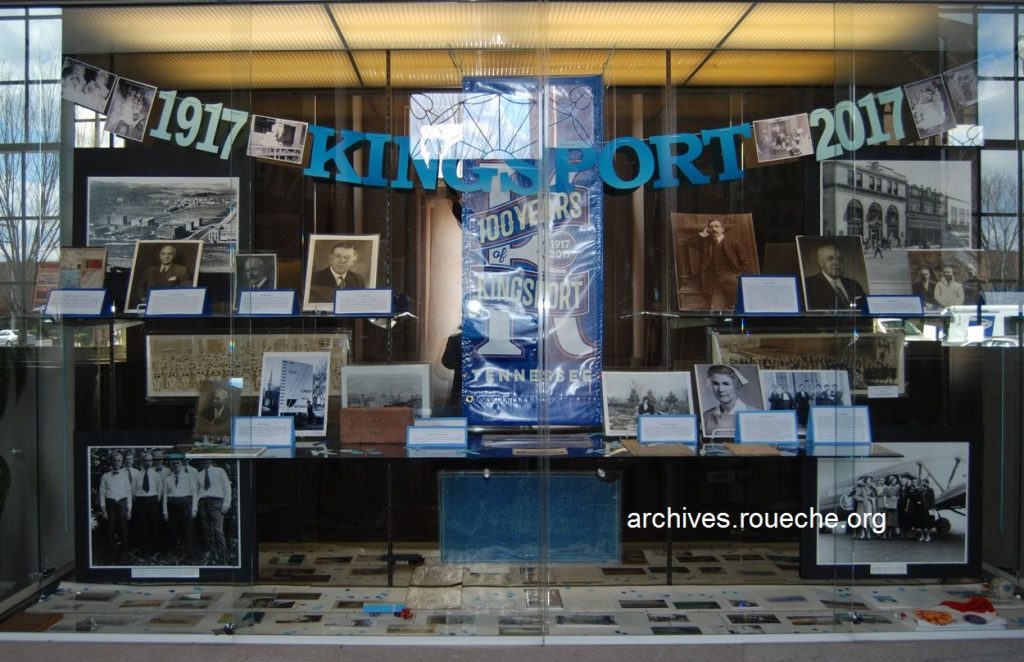 This exhibit is also special because it was one that Brianne and I did together and one that we took our time on, enjoying the discovery of special items found in some of the smaller collections. 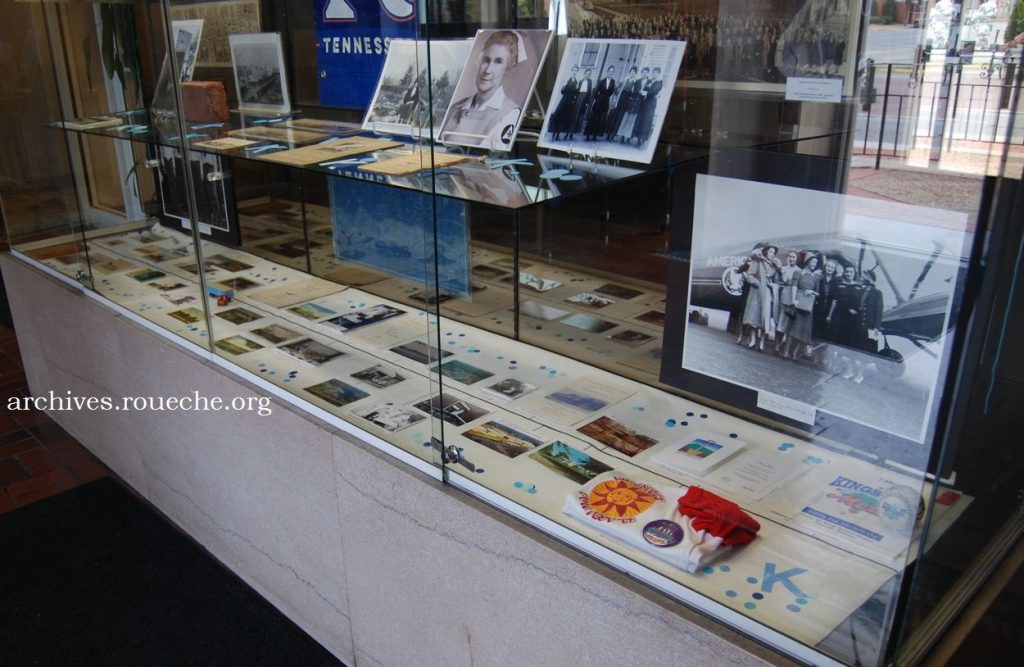 The timeline includes photographs, vintage postcards, programs, and some memorabilia from important events in town history. Here is a close-up look at the timeline. 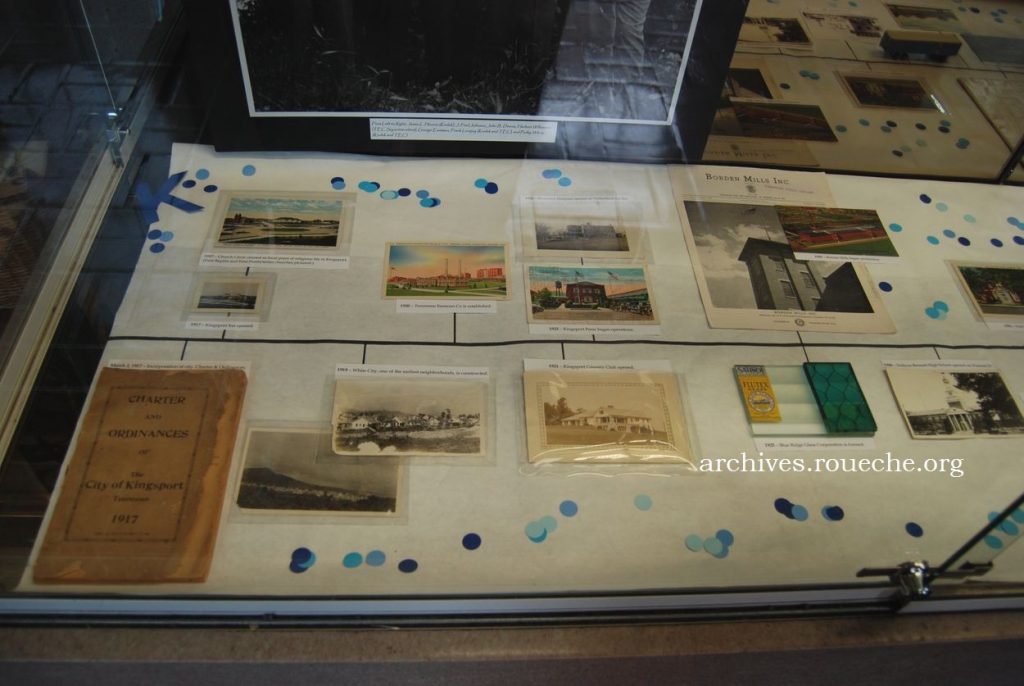 The above portion includes a copy of the original town charter and ordinances. Other items commemorate the development of White City, one of the first neighborhoods; the construction of Tennessee Eastman; the opening of The Kingsport Inn; and the establishment of the Blue Ridge Glass Co. 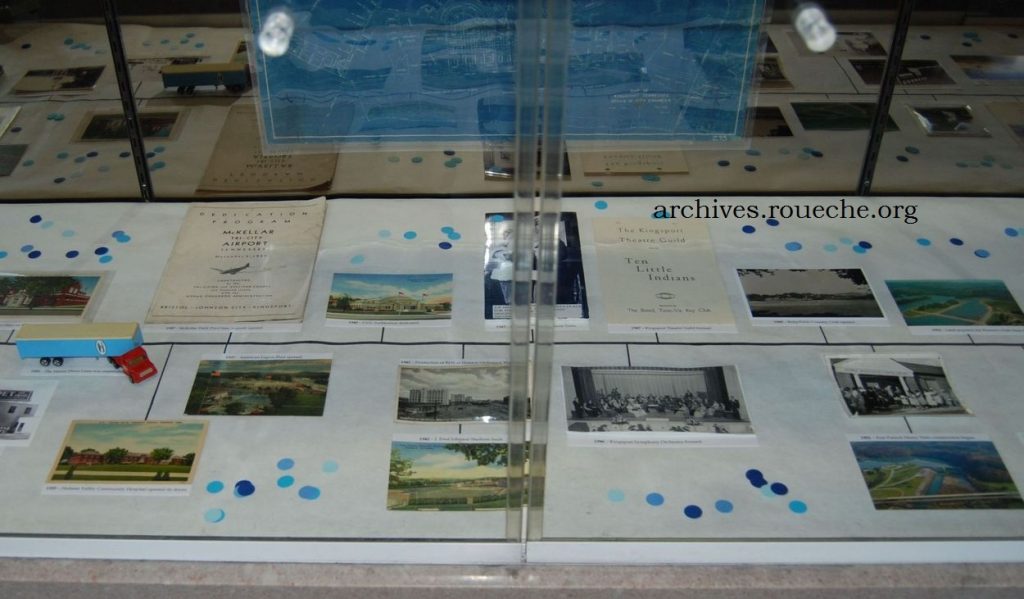 The middle section illustrates some of the cultural institutions of Kingsport, such as the dedication of the Civic Auditorium in 1940, the first Santa Train in 1943, and the founding of the Kingsport Symphony in 1946. 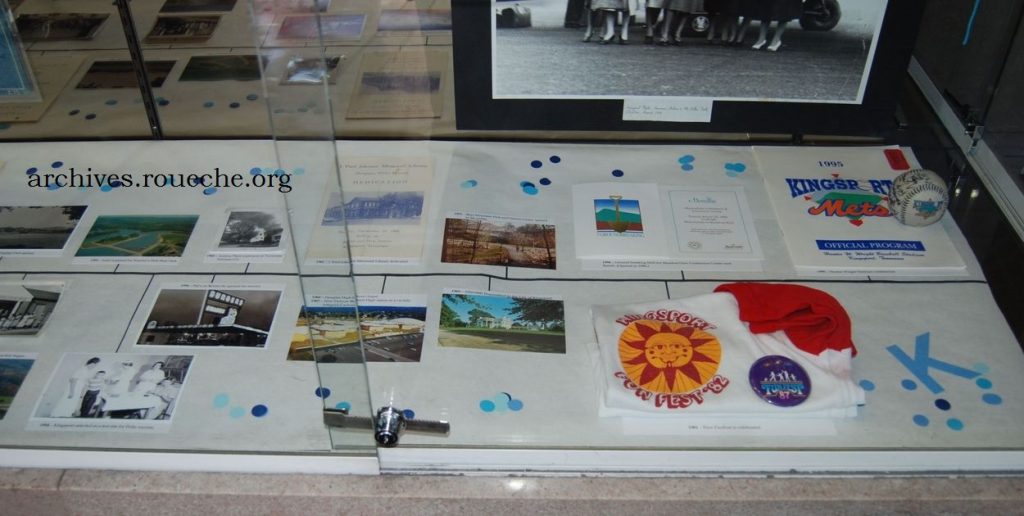 The last section of the timeline boasts some of the modern developments in Kingsport, such as the construction of Patrick Henry Dam in 1951, the opening of the original Pal’s in 1956, and the first year of FunFest in 1981.

Here are a few of my favorite items in the timeline. 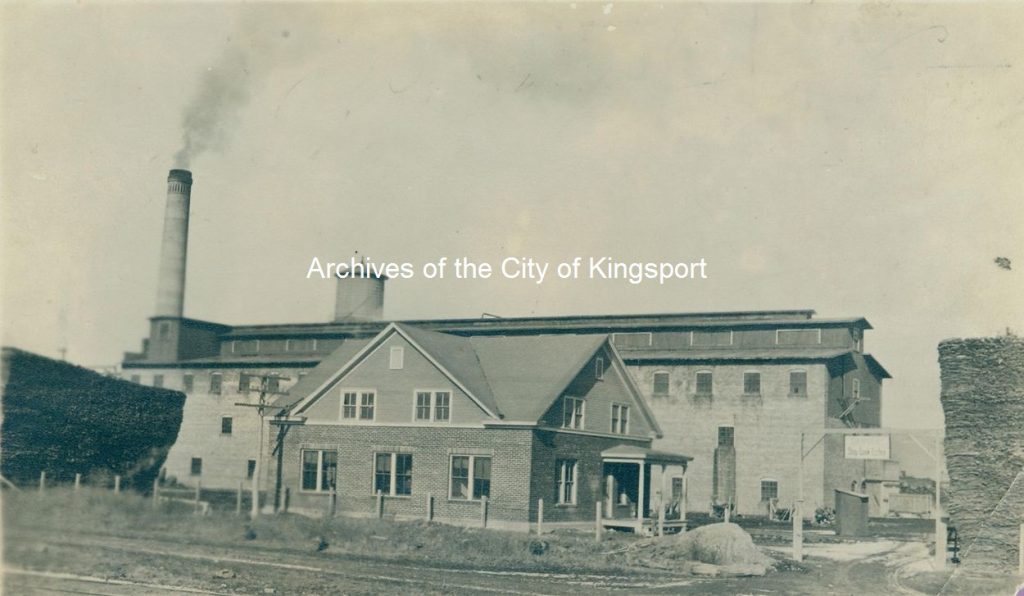 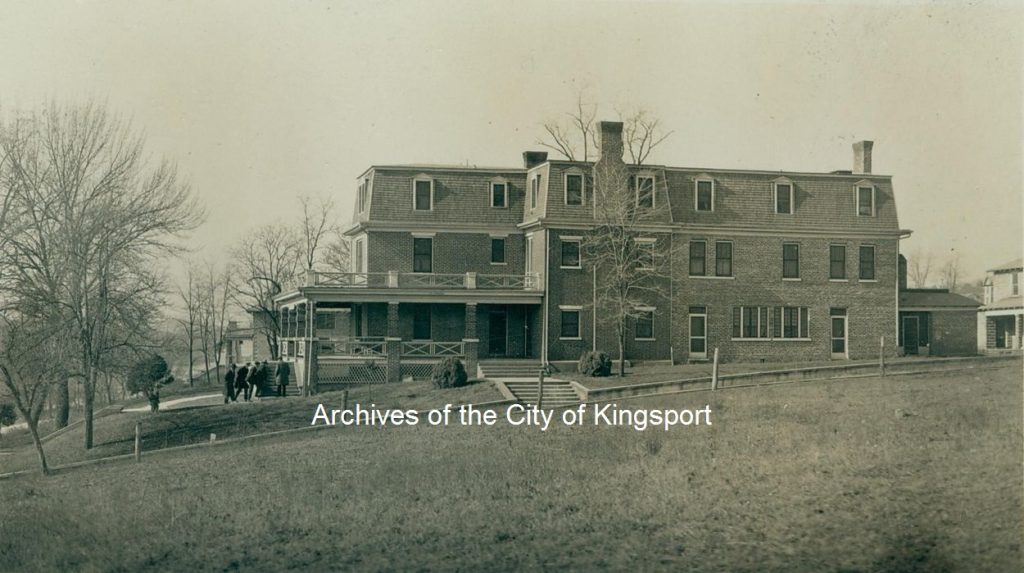 Riverview Hospital: Opened on Netherland Inn Rd in 1922. This is the finest photograph I have ever seen of it. The building has a long history beginning in the 1810s. It was first a home, Oak Hill Mansion, then it was expanded and converted to apartments, a men’s club, and then a hospital. 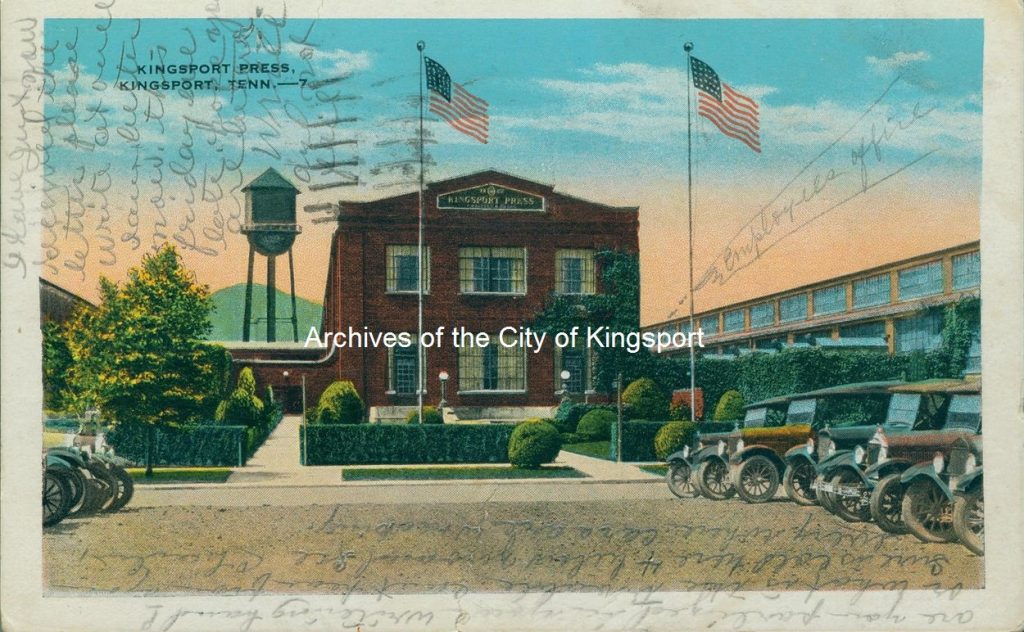 Kingsport Press: Established in 1922. There is a postcard for almost everything that ever happened or was built in Kingsport. Sometimes multiple versions of each. They are all a charming and valuable resource in the archives. 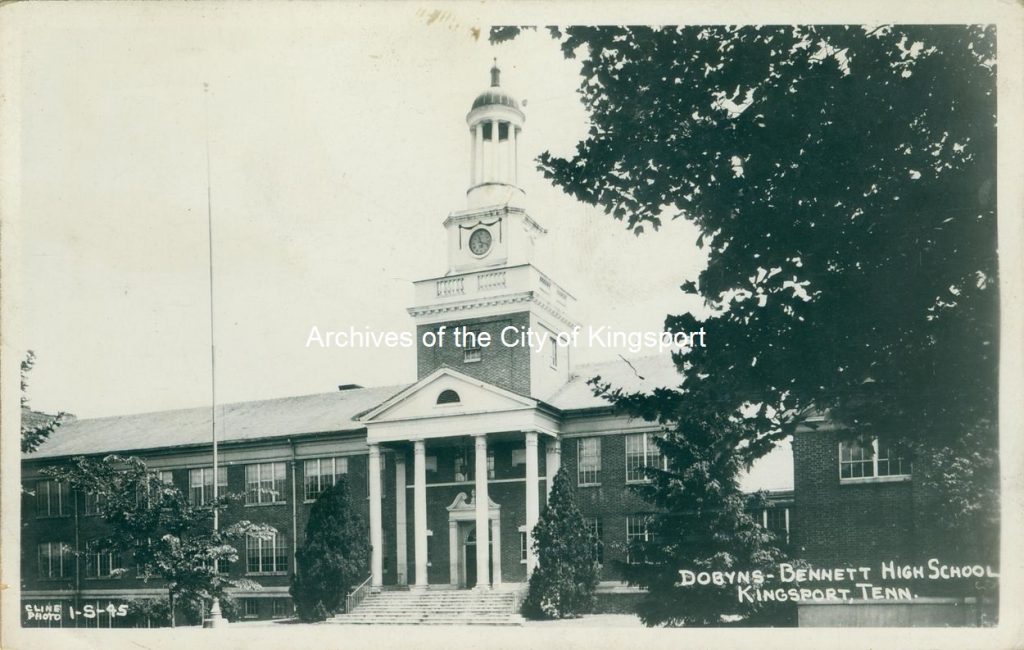 Dobyns-Bennett High School: Built in 1926. Although the picturesque school was no longer called Kingsport High, the “K” was still featured on uniforms and sweaters for many more years.

Eleven prominent leaders are featured in the exhibit. 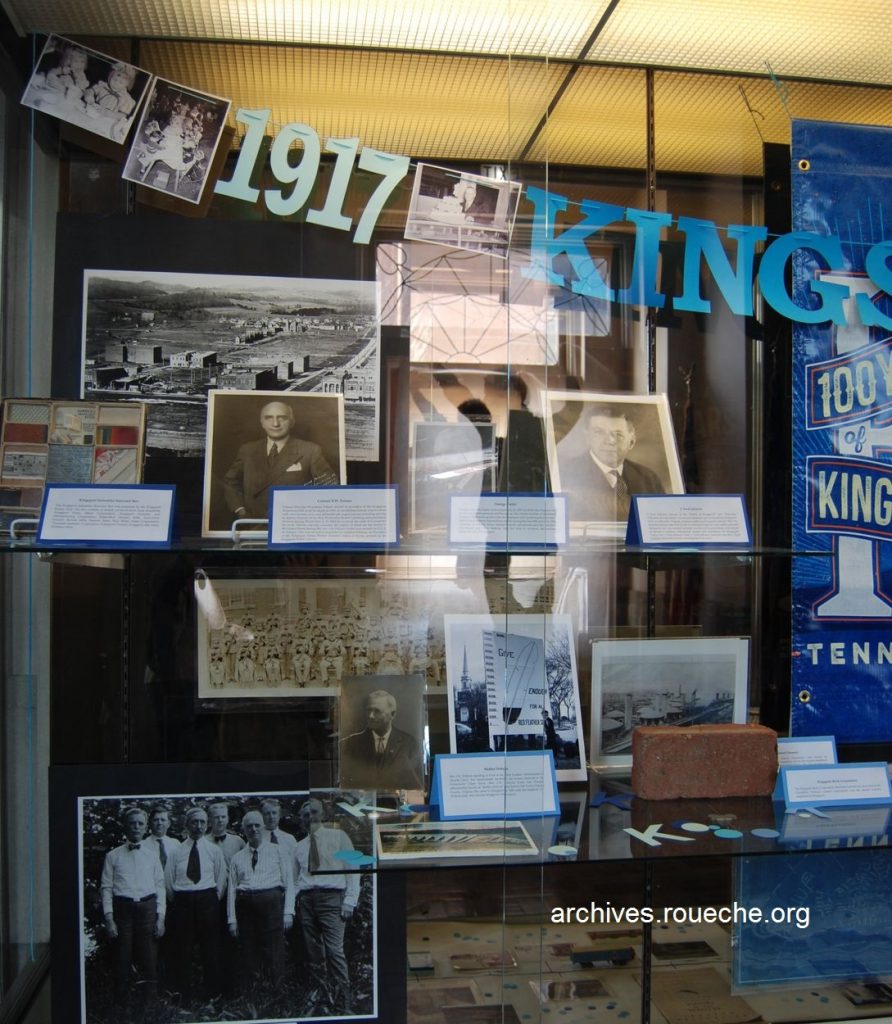 Starting in the upper left of the case we have E. W. Palmer, president of Kingsport Press, founder of the Palmer Center, and advocate of a modern library; George Carter, railroad magnate and land developer responsible for making industry accessible in East Tennessee; J. Fred Johnson, who courted industries to help build Kingsport’s economic base and tirelessly fought to establish a modern education system and health care for the city; James W. Dobyns, Kingsport’s first mayor; and Mrs. J. W. (Lulu) Dobyns, a driving force behind various charity efforts such as the Community Chest. 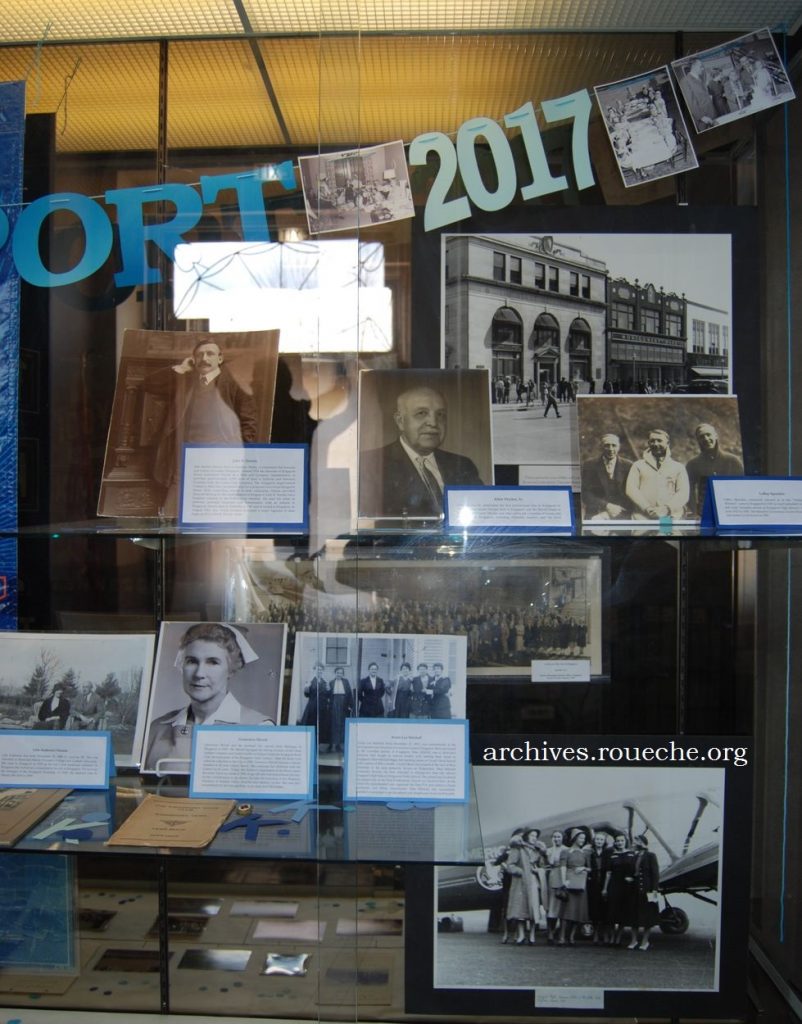 Portraits at the right of the exhibit introduce John B. Dennis, the agent who purchased 6,355 acres from the Carter Coal Co. and acted as the financier and negotiator who brought much of the industry to early Kingsport; Allen Dryden Sr, architect of Allandale Mansion and the Civic Auditorium; LeRoy Sprankle, longtime coach and athletic director of Kingsport High; Lola Anderson Dennis, Kingsport’s first landscape architect; Genevieve Shivell, pictured in her Red Cross uniform, she co-founded the Kingsport Book Club which acted as the city’s first lending library; and Annie Lee Mitchell, Kingsport’s first public school principal.

There has been much talk in the paper and around town, recently, about establishing a city history museum. Any discussion about opening a museum must begin with improving, expanding, and supporting the City Archives. Before you can display your history, you must first collect and preserve it. Please consider having a responsible discussion with your mayor and aldermen about the importance of the archives as we enter the next 100 years!

The “Kingsport 100” exhibit will be on display at the library at least through March 2017. 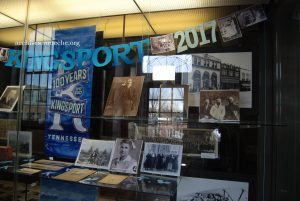 Feature image: A view of Broad Street from the train station on Main.

This entry was posted in Kingsport and tagged archives, Brianne, exhibit, Kingsport. Bookmark the permalink.