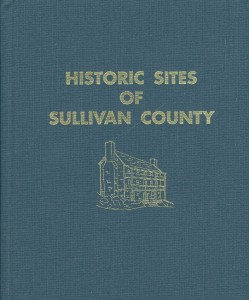 The field notes, photographs, note cards, and writer’s proofs are all part of the Muriel C. Spoden collection, KCMC 516, at the Archives of the City of Kingsport. In the past, I have attempted to compare the archival photographs with current ones by reading the narratives in the book and attempting to find the historic sites.

I tackled Part I, Reedy Creek/Bloomingdale and Part V, Reservoir Road/Sullivan Gardens in April 2015. This fall I have been hunting down the sites of Part IV, Kingsport/Long Island of the Holston. I even took the husband with me one day on his very first Archiventure!

I started on Netherland Inn Rd. at the 1830 Aaron Hoffman House. 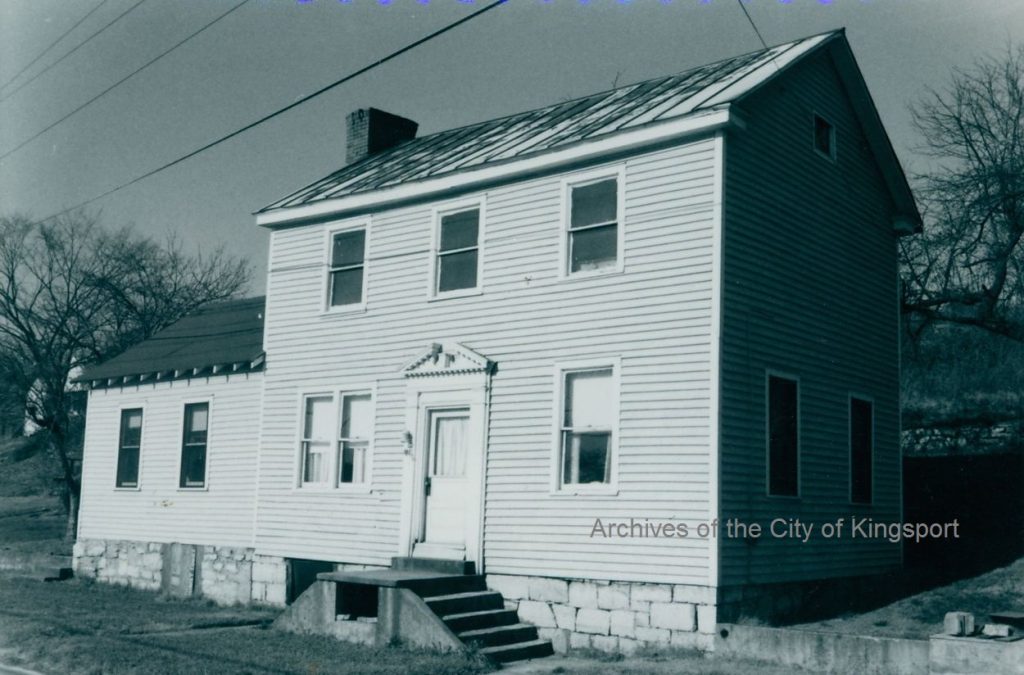 Hoffman was a tanner and worked in the Boatyard. The house was still owned by descendants in 1976 when the book was published. 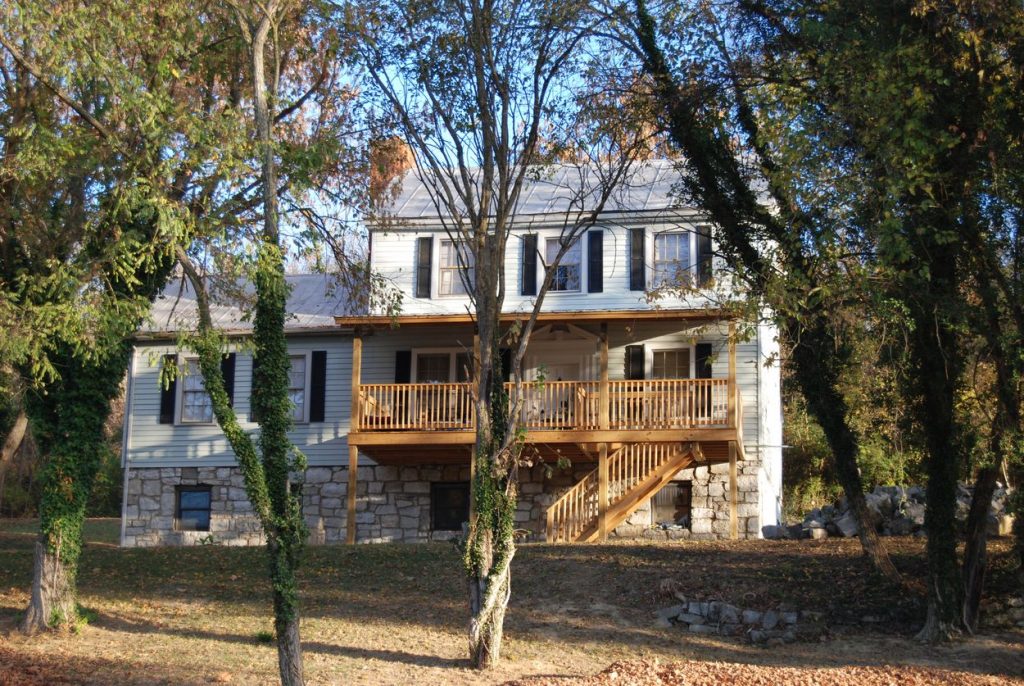 Notice how the front of the property has been dug down to reveal the foundation, requiring a staircase at the entrance. I photographed the rear elevation, as well, so you can see the change from the back. 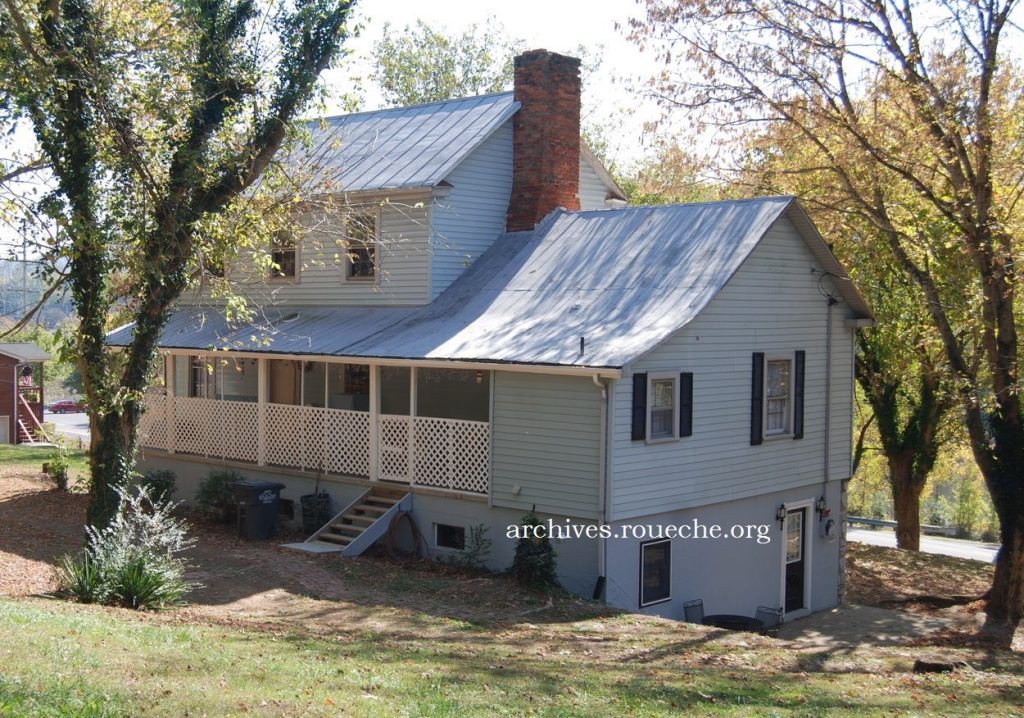 Up river, I visited the Smith House on Shirley St. E. D. Smith and his wife Louie Jones bought the lot in 1892. When Louie died, her sister Selina and her family moved in. 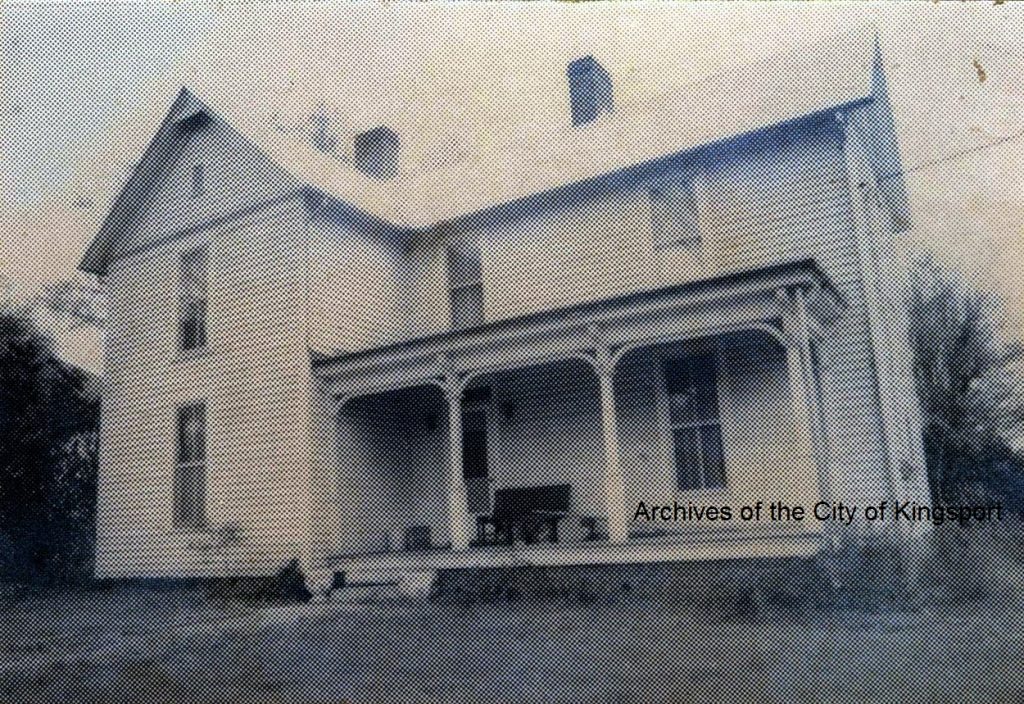 There are three challenges to this project. The first is that not all of the original photographs were intact when the collection arrived at the archives. As you can tell, the above image was a reprint that was included with Ms. Spoden’s papers. 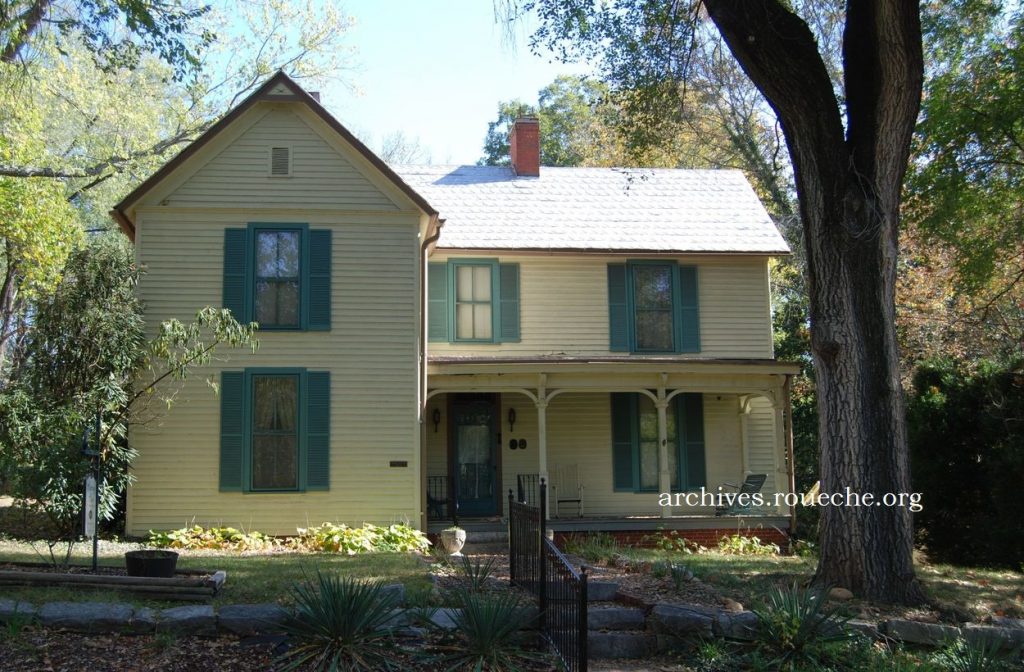 The Smith house is now known as the Hammond House and has been preserved as a historic site for visitors.

Leaving the river front, we drove to Mount Ida. The log house was built c. 1790 for David Ross, who ran a nearby iron furnace. His heirs sold the property to David D. Sevier and Annis Netherland in 1817. 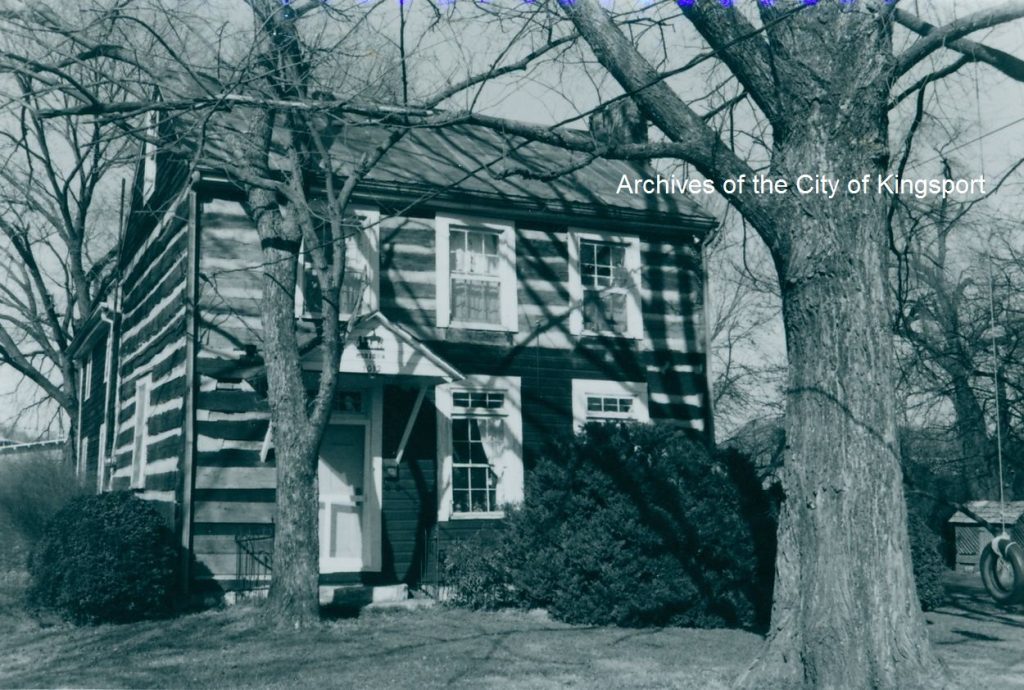 The Seviers lived in the log home for a time until they built a comfortable brick mansion on the estate in 1884. 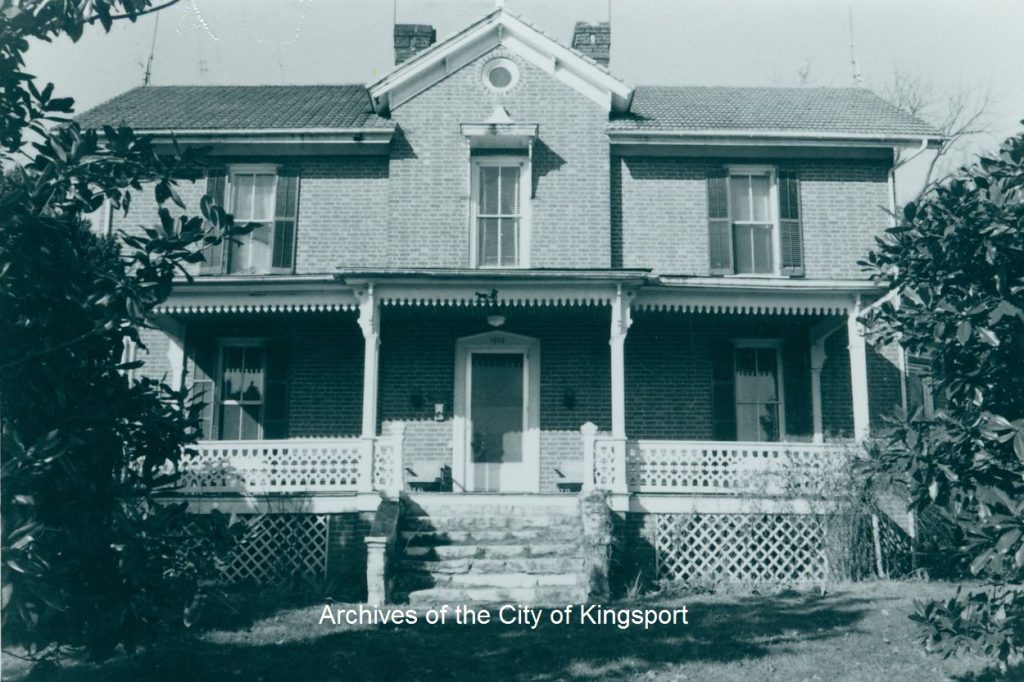 The Seviers moved the log house to the rear of the grounds, making room for a family cemetery in the front. The Mount Ida homes are still beautiful, today. 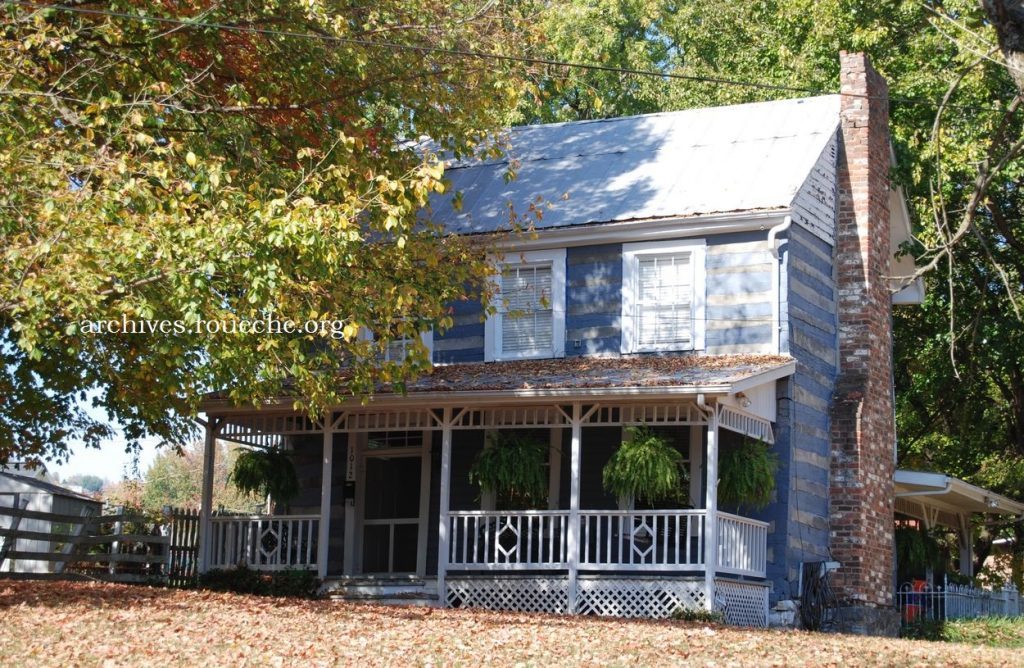 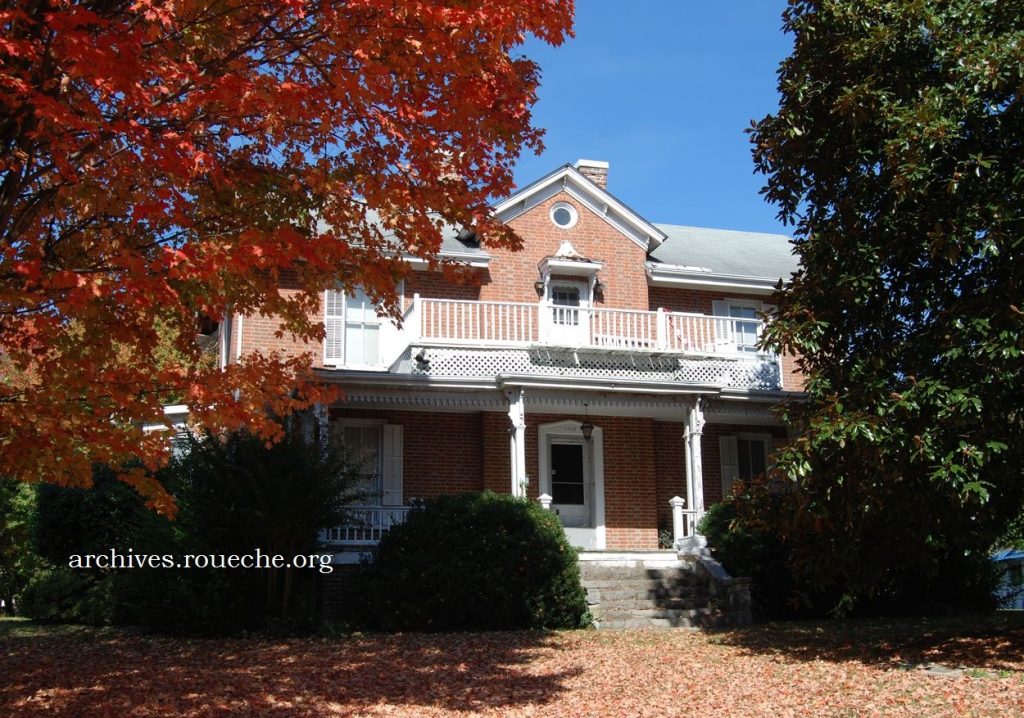 Sadly, the original photos for the Ross-Netherland House, the Old Kingsport Presbyterian Church, and the Lynn House – Oak Hill were all missing, so I headed over to Fair Acres to see two homes, including the Martin-Dobyns House. 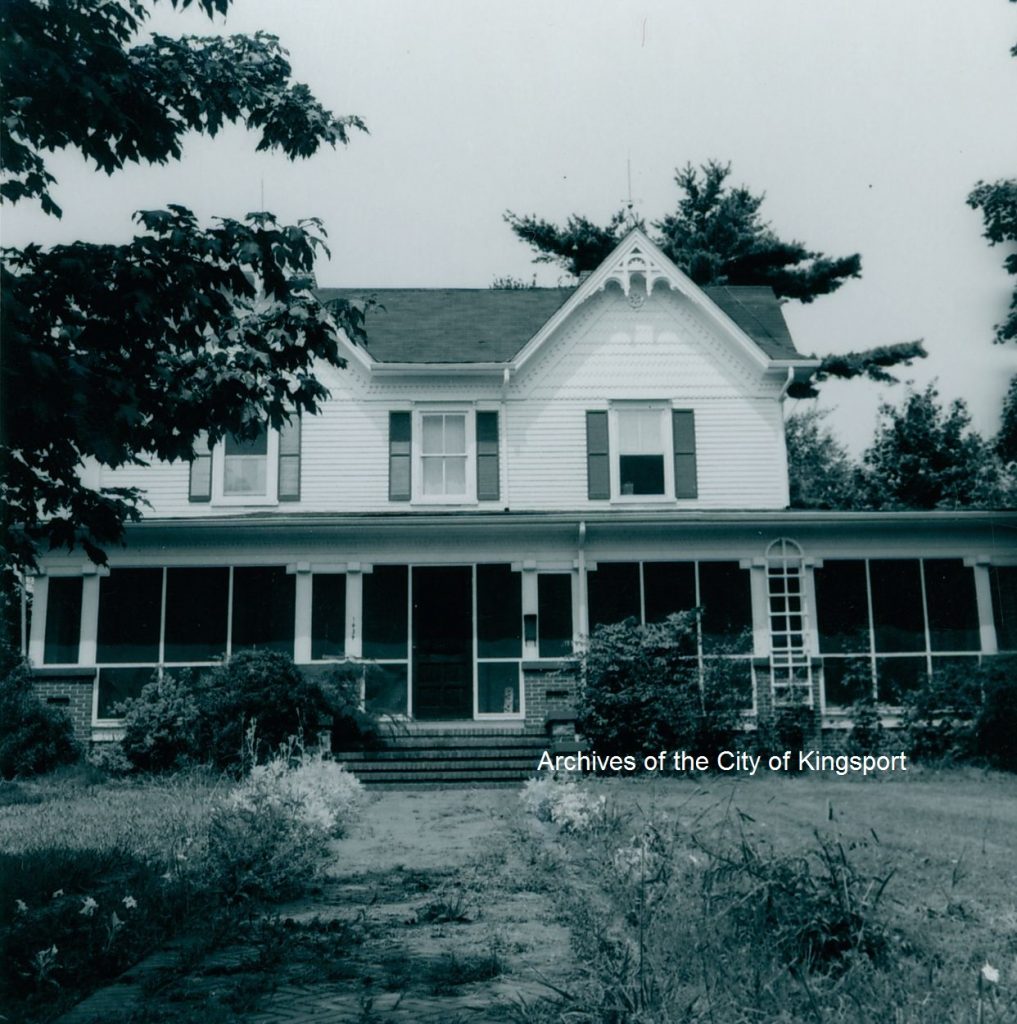 At one point, this house was the centerpiece of the plantation that covered all of Fair Acres. Andrew F. Martin was married to Elizabeth Bachman, daughter of the plantation owner, and Martin built the house in 1878. Their family cemetery is on Linville Street. 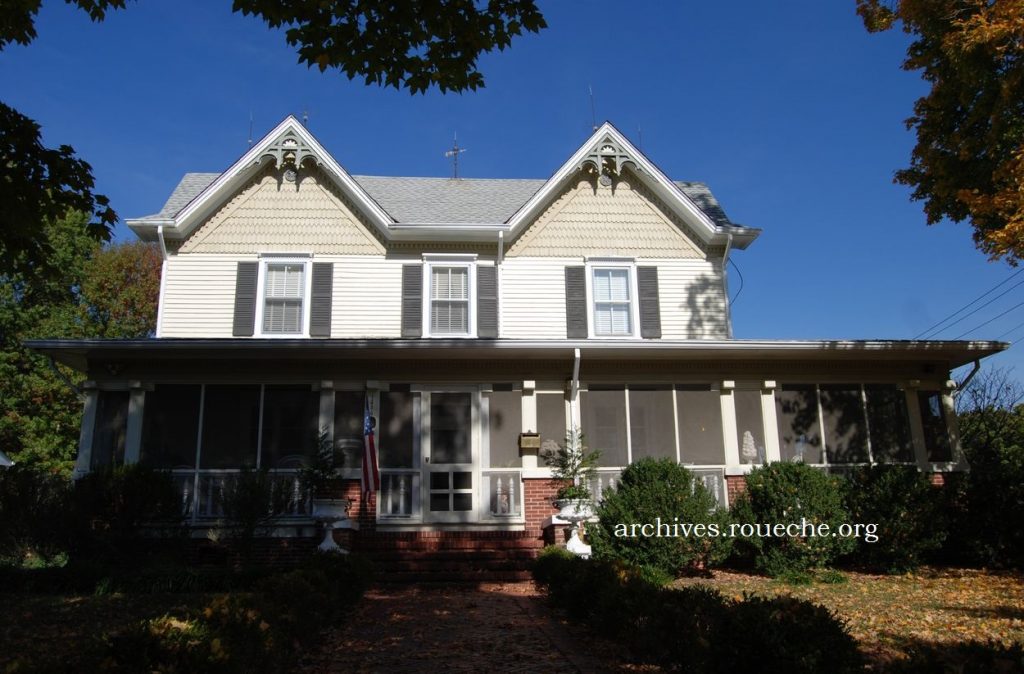 In the 20th century, Kingsport mayor James W. Dobyns resided in the home. 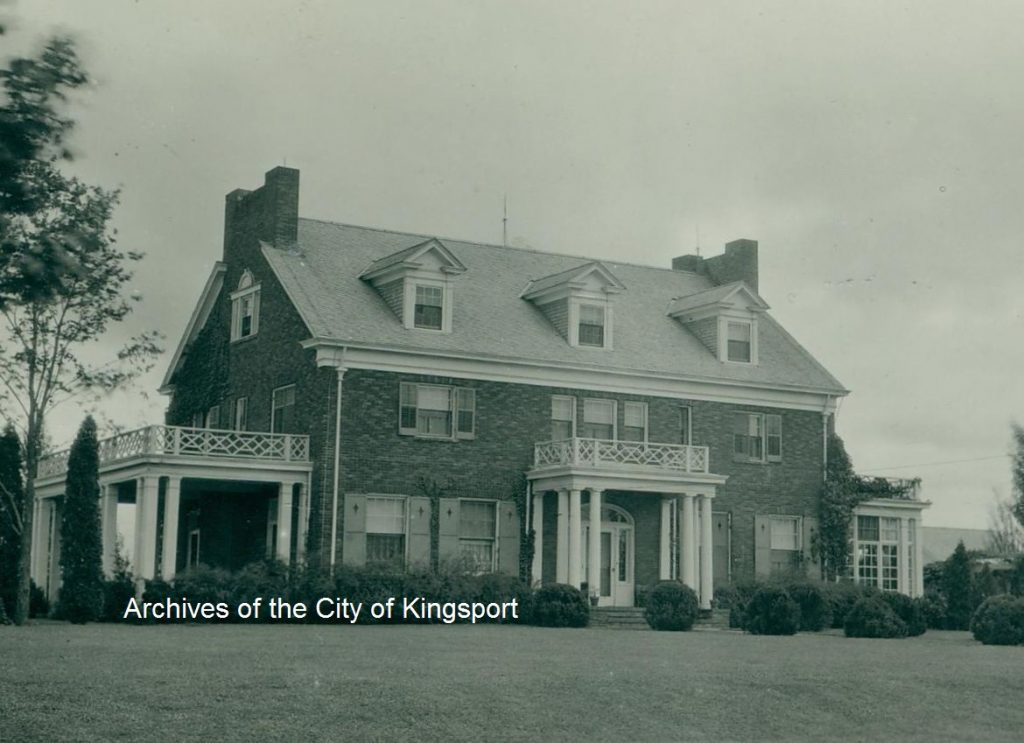 Fortunately, original photographs and garden plans have been preserved with the J. Fred Johnson Family collection, KCMC 49, to serve as a resource for future owners. The house is beautifully maintained, today. 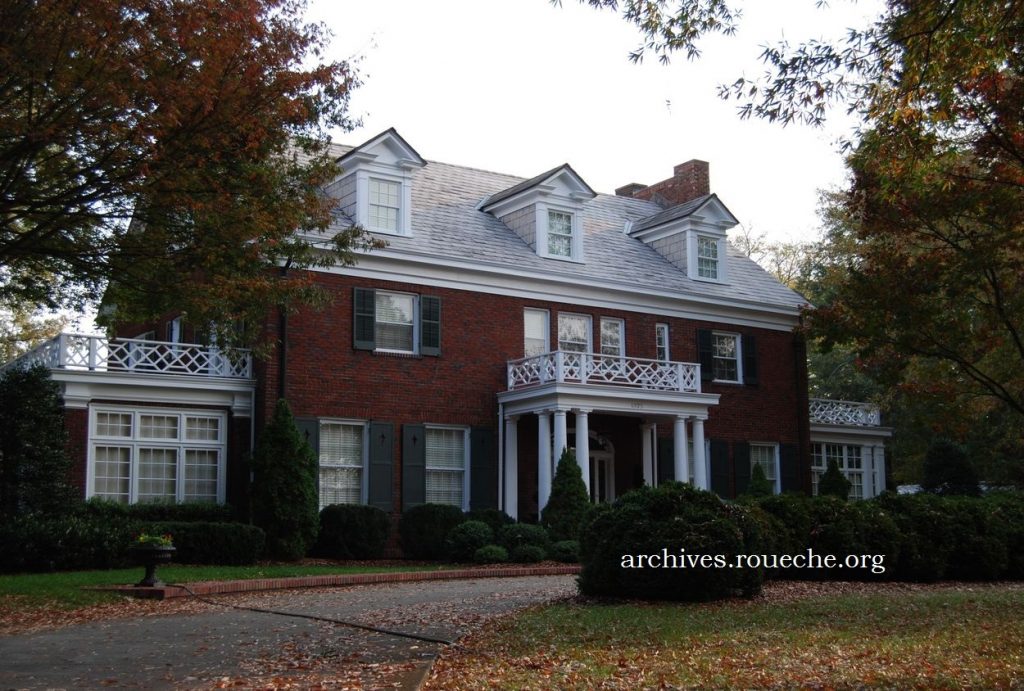 The second challenge to this project, no matter which chapter I am tackling, is that many of the structures are no longer standing. That is true for the Myers-Birdwell property in Cliffside. 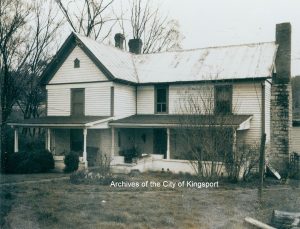 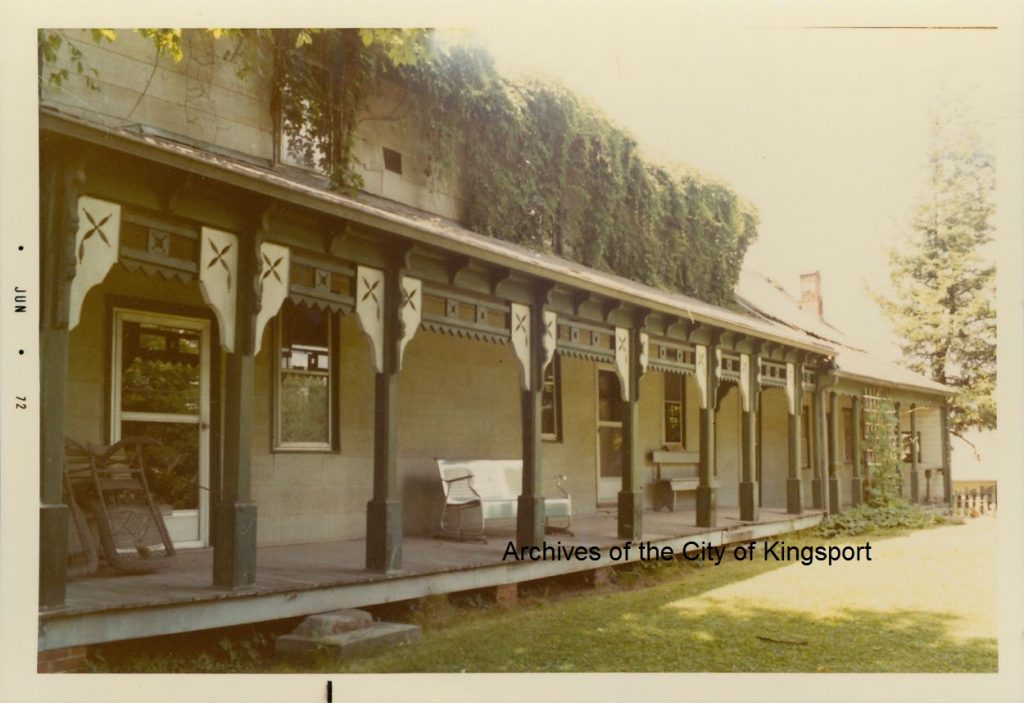 And though Roseland still stands, it’s been moved! You know it as a member of the Exchange Place family of buildings. 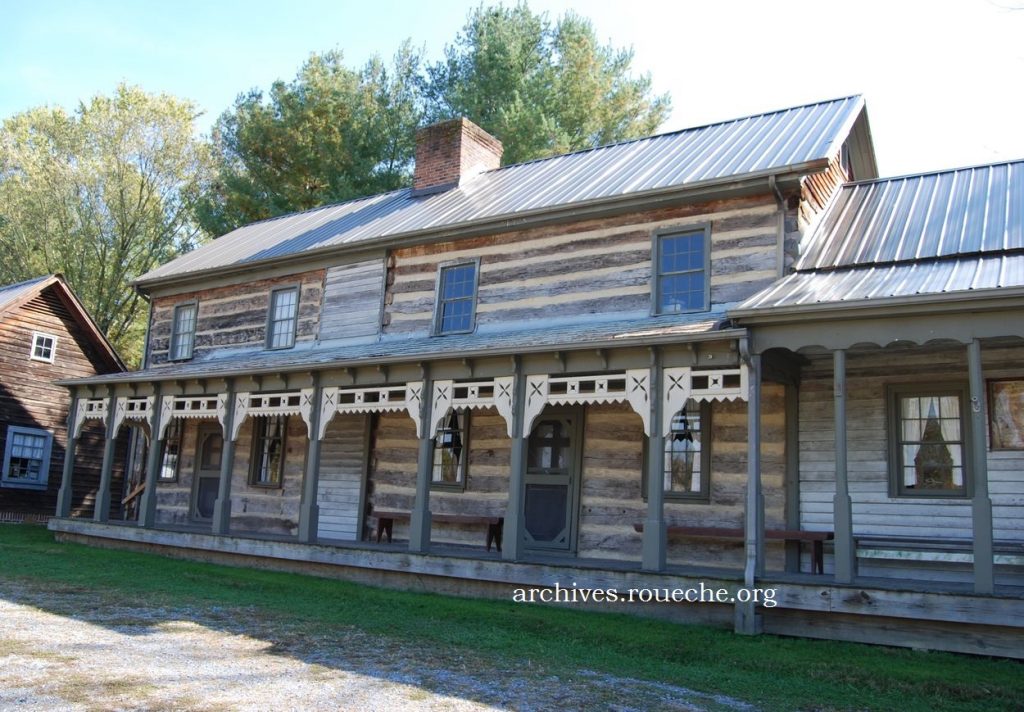 Mountain View Methodist Church on Orebank Rd. is another example of a charming, historic frame structure that no longer stands. 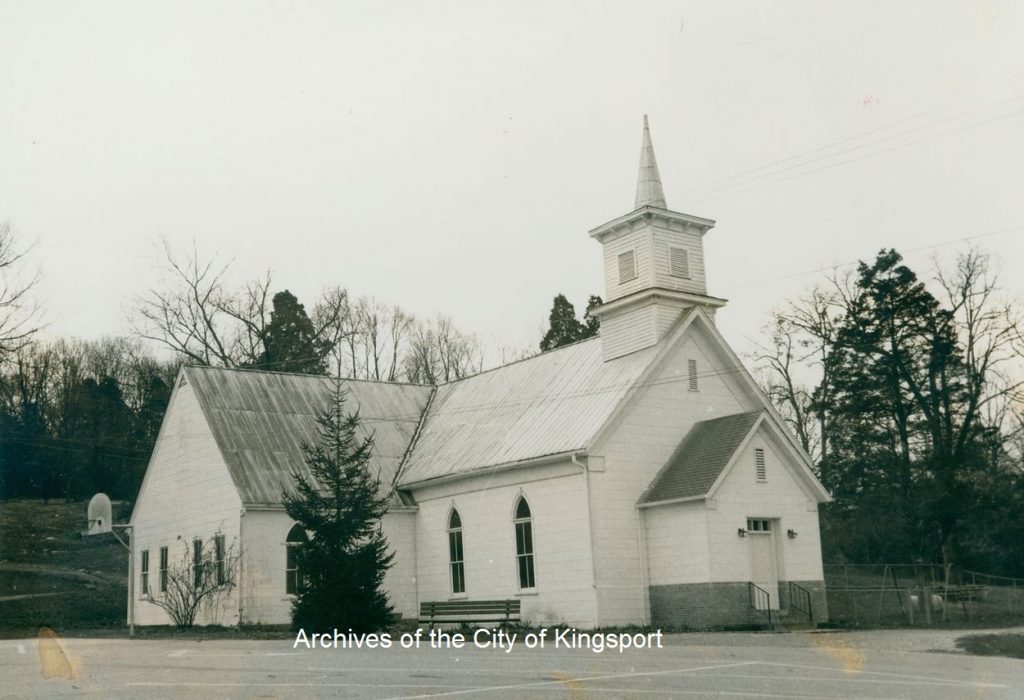 Today, the congregation attends this modern church on the same road. 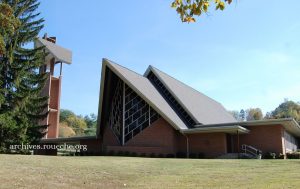 The third challenge to this project is actually finding the historic locations. Not only have the names of roads changed, but often the authors described locations in local vernacular, making use of landmarks, and other terms that do not make sense to this California girl.

One home that anyone can find is the Enoch Shipley House on Memorial Blvd. 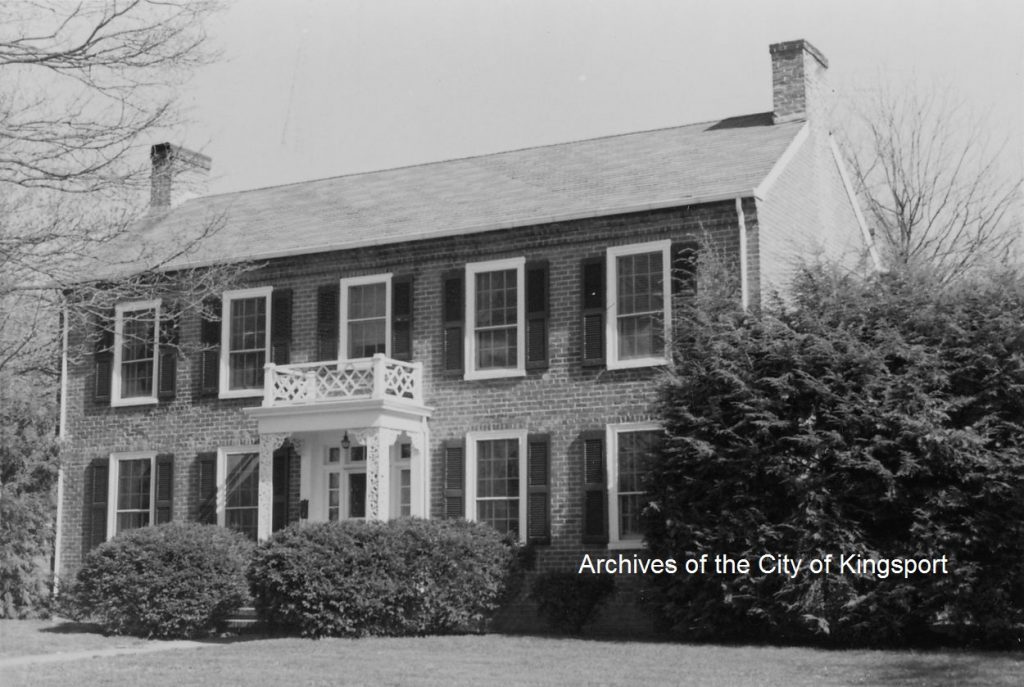 George Roller Sr. purchased part of the Pendleton Land Grant in 1801. In 1840, his heirs sold off a portion to Shipley (think Shipley Ferry Rd). Slaves fired the bricks for the new home right on the property. In 1935, the home underwent a major renovation by new owners. 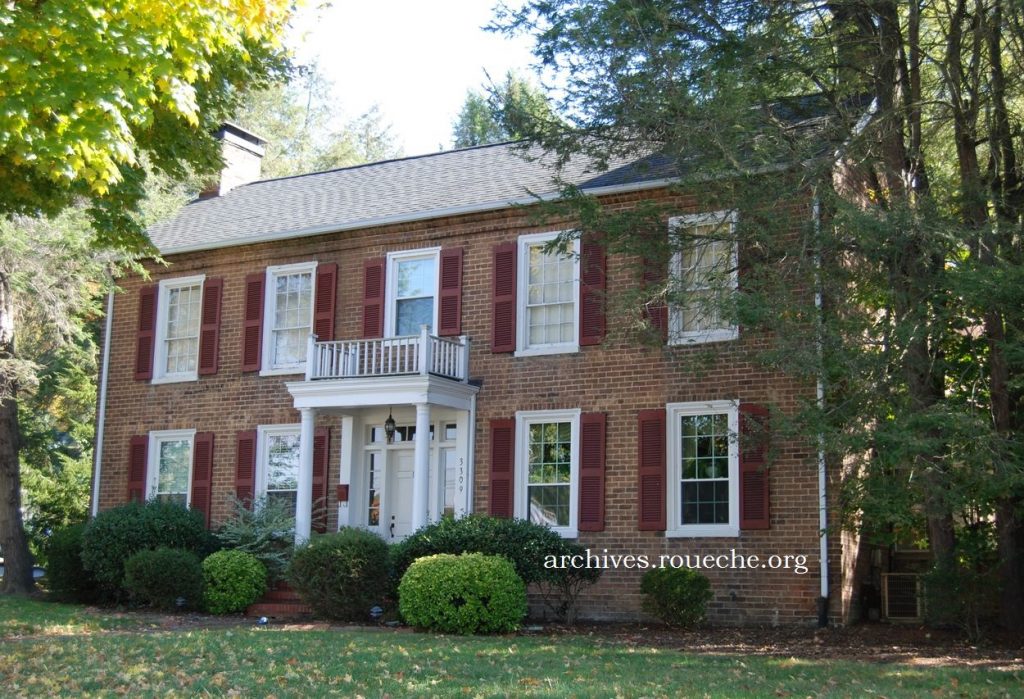 In 35 years, when I am long gone, another archivist will come along and try to rediscover these historic homes for herself and will find even fewer standing. It’s a good thing to appreciate them while we can.

Feature image: Looking up from the Sevier Family Cemetery at Mount Ida.

One Response to Kingsport: Update on History