From its founding in 1922 and for the next eighty years, the Kingsport Press was essential to the economic life of Kingsport, Tennessee. 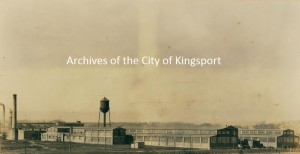 The paper, cloth, and leather products manufactured at city mills like Mead, Holliston, and others, were integral to the bookmaking process. When a new collection was recently acquired by the Archives of the City of Kingsport it was full of gems from the first half of the Kingsport Press’ history. These treasures are part of the new archival exhibit at the Kingsport Public Library. In this post I am going to share my favorite items and images. 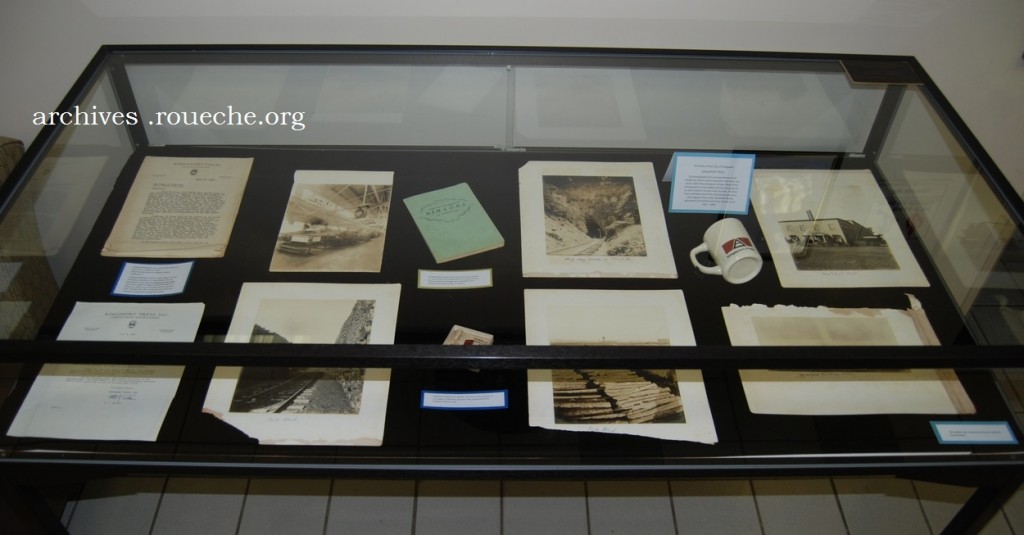 The left case highlights some of the historic correspondence in the collection along with photographs dating back to the 1920s.

Most of the photographs from this recent donation were once bound in a book and are therefore two-sided. They seem to tell the story of the development and industrialization of early Kingsport. 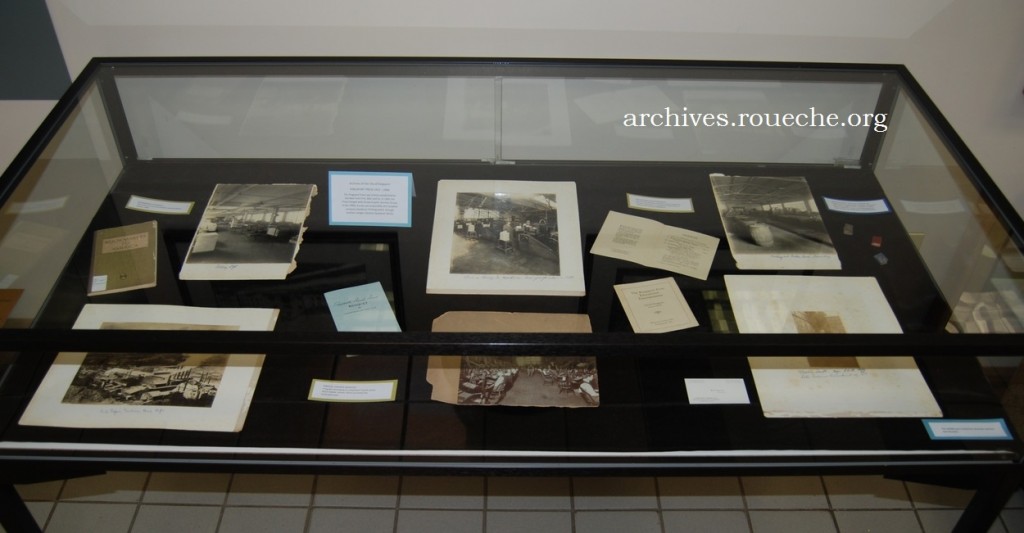 The right case displays interior images of the Press and a set of the world’s smallest books. 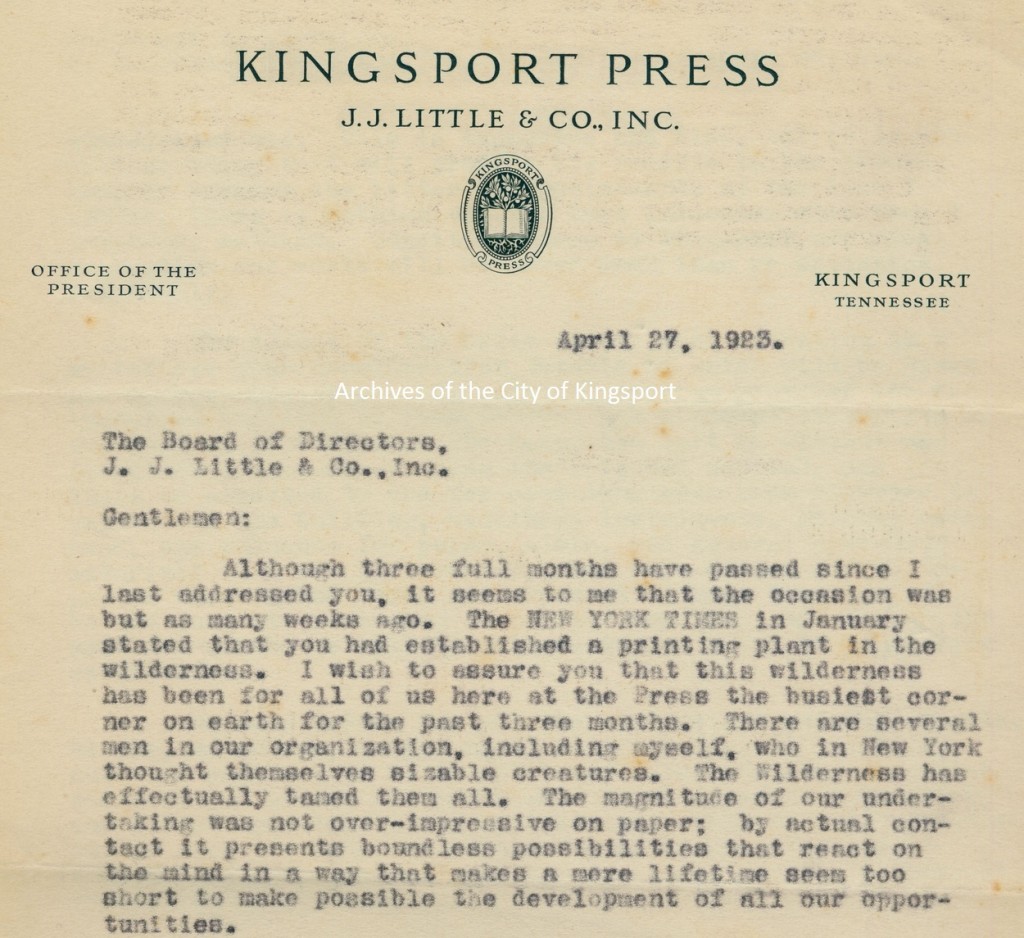 A letter from the company president Lewis Adams describing Kingsport as a “wilderness.”

The new collection also contains some very significant correspondence concerning the strike and other matters, employee mementos, training materials, and keepsakes. I’ve paired a few of these items with some Kingsport Press ephemera from other archival collections, as well. 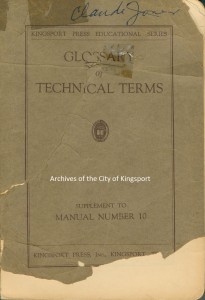 Too fragile to be exhibited, the condition of employee manuals and guides demonstrate their frequent use.

By leafing through the various guides and manuals, my eyes were opened to just how much responsibility typesetters and copy markers shouldered. The pages of these texts are dog-eared, taped, and highlighted. 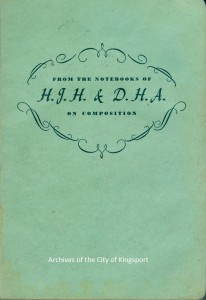 This employee updated his manual by pasting passages right over out-of-date guidelines. By the way, Kingsport Press printed their own manuals. Of course they did! 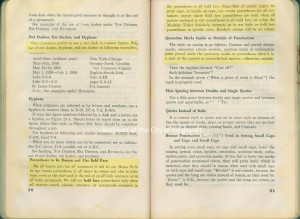 This is the inside of the green “Composition” notebook. 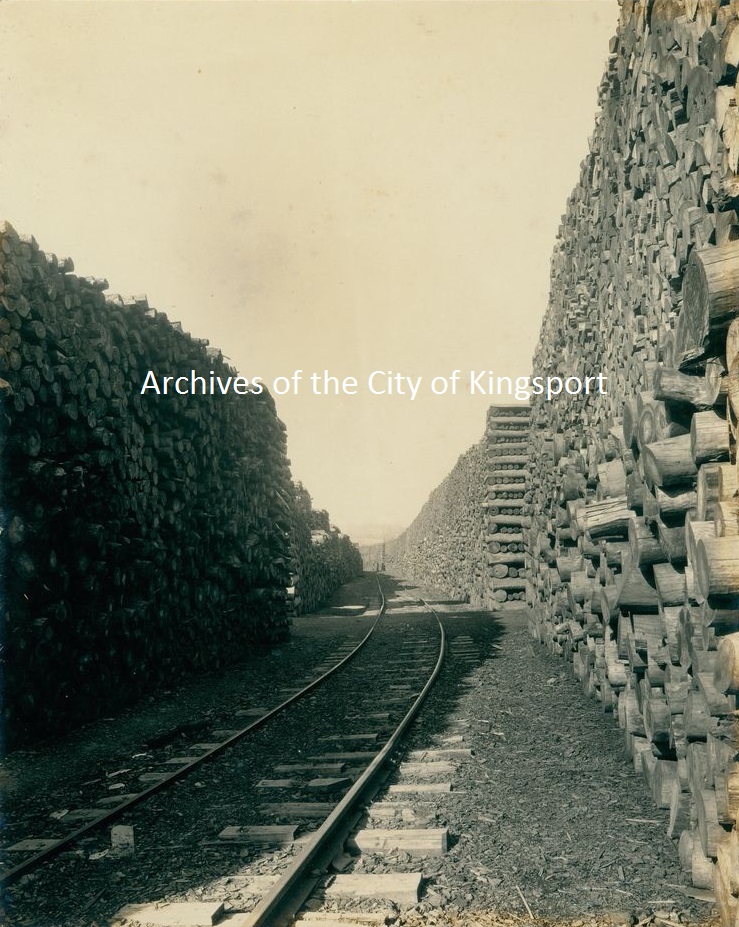 Some of the photographs have hand-written captions that express quite a bit of of pride and emotion over the Press’ achievements. 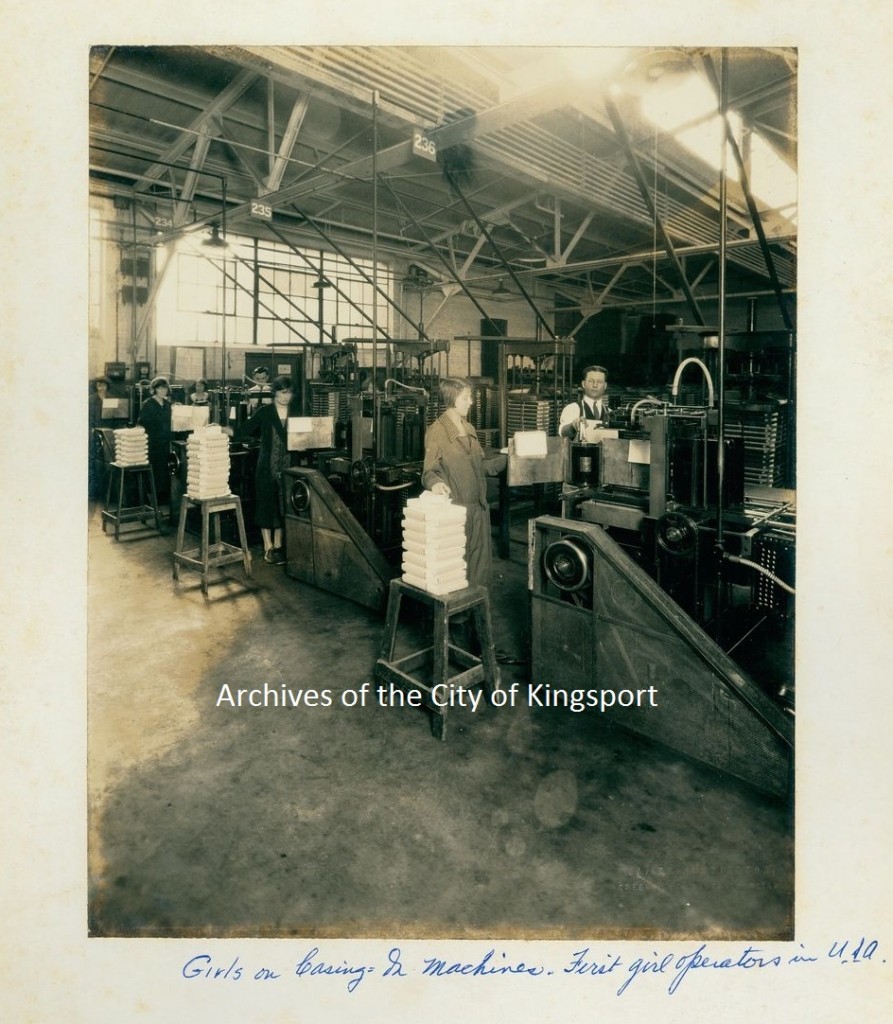 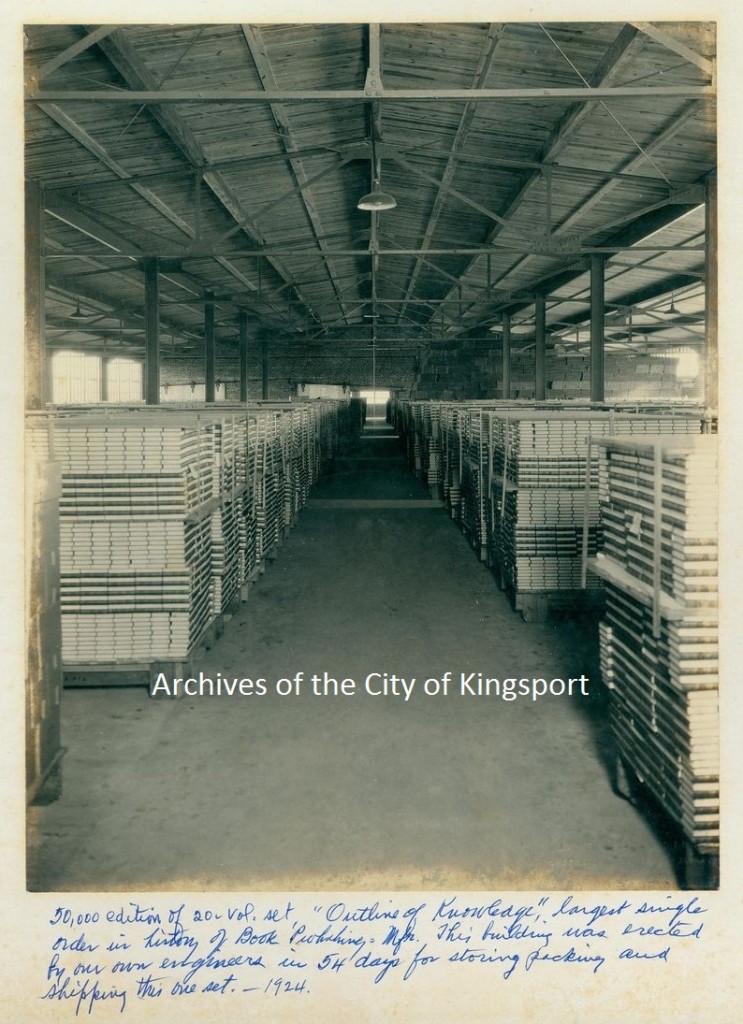 The Kingsport Press  for many years promoted arts and education through performances and employee activities. Here is a program which featured, among other things, a pantomimed tableau and a children’s chorus. 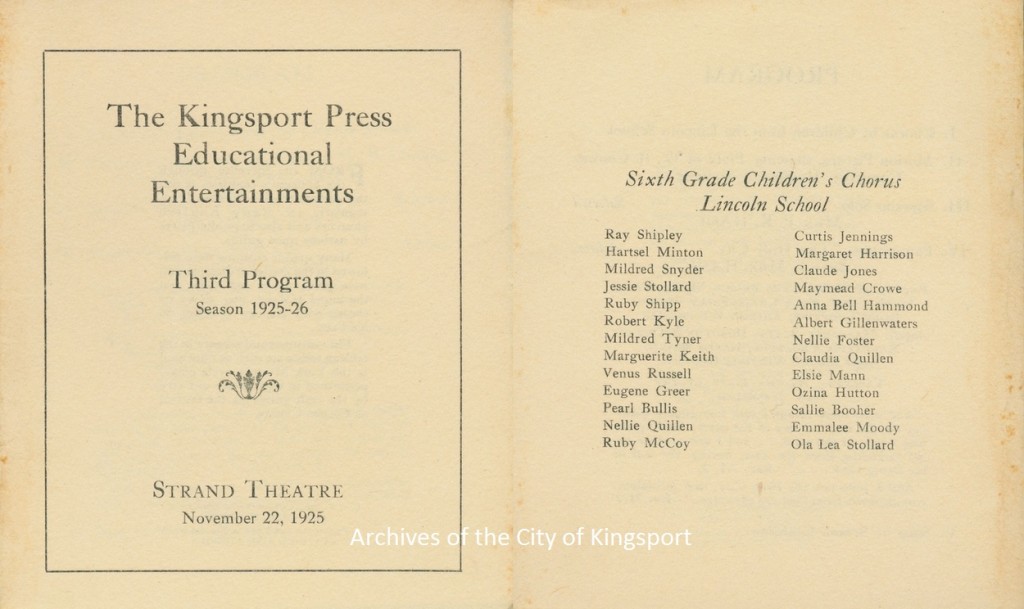 Front and back covers of a 1925 performance given at the old Strand Theater. 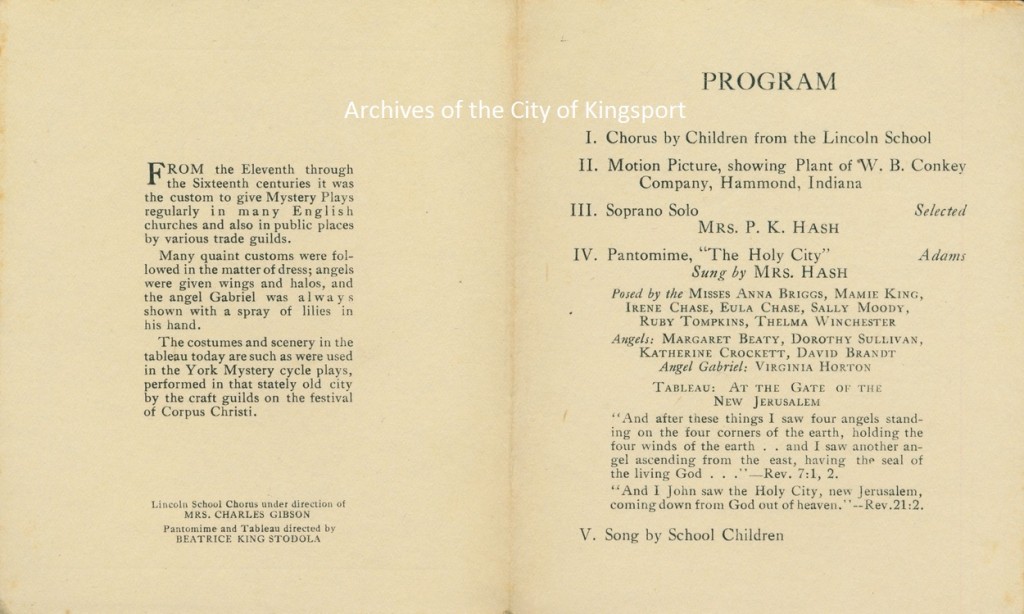 You might recognize from the above program the name Beatrice King Stodola as the choreographer discussed in a previous post, “The Paste Princess.”

And here is a program from a 1975 awards banquet. I love reading menus from the mid-twentieth century. I think rainbow cake has made a comeback, actually. 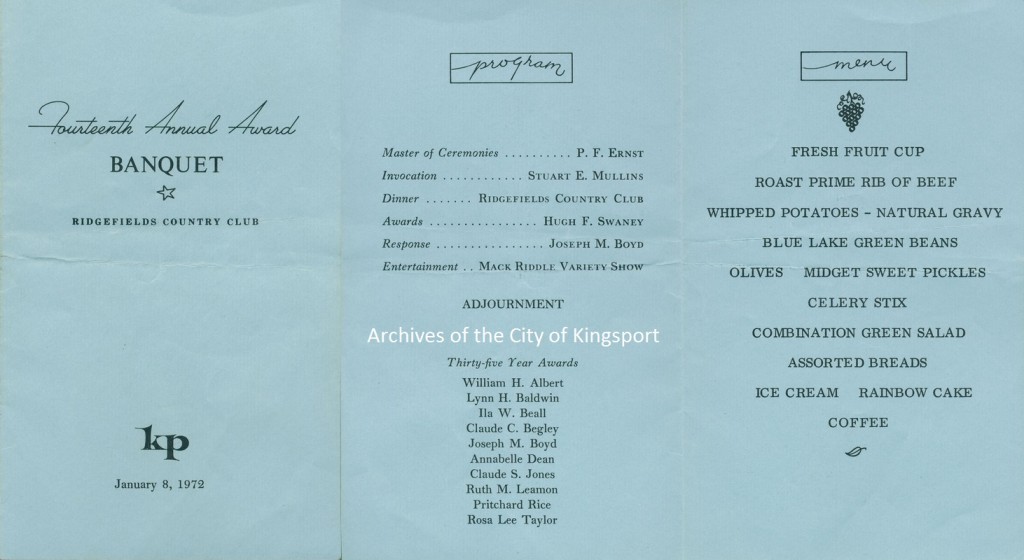 This next bit of correspondence is fascinating, I think. The current Press president is writing to a former president about the Kingsport Press strike following his recent visit to Kingsport. One of the nation’s longest, the strike began on March 11, 1963, and continued into the spring of 1967. By April 28, 1967, both new and returning company employees rejected the unions. 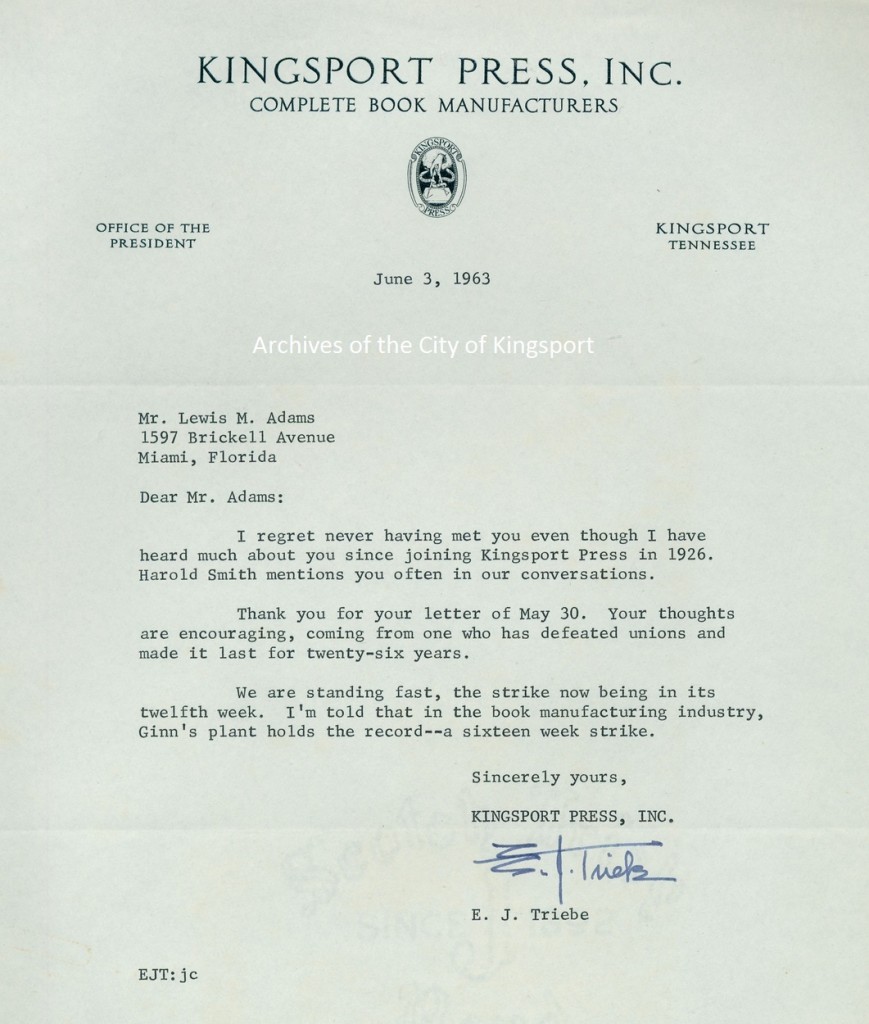 The beautiful brick buildings of the Kingsport Press were demolished in 2009-10. The railroad tracks that crossed Clinchfield St. and disappeared behind the gate have been removed and all that remains is one structure reserved for the Farmer’s Market.

The Archives of the City of Kingsport has a substantial Press Collection (KCMC 204) and several other related collections for anyone interested in further research. The exhibit will remain on display on the main floor of the library through the end of July 2016.

One Response to Kingsport: Press Clippings