There is a set of tea towels in my possession. They were made for my mother by her grandmother, Elizabeth Ann Williams Mansfield (1867-1949). I wrote a little about my great-grandmother here. My mom was only in junior high when her grandma died, but when she got a house of her own, she just couldn’t bring herself to use the towels. She couldn’t even bring herself to display them. 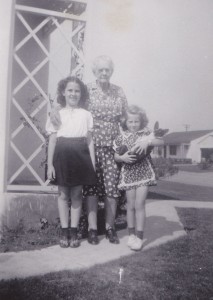 After I married and had a daughter of my own, the tea towels were given to me. They took up residence in my linen closet just like they had in my parents.’ I showed you what those towels look like in this post. That towel set has been on my mind for about a year, now. If I could think of a safe way to display them, I would think about my great-grandmother every time I passed them!

Last fall two friends and I went to a family papers preservation workshop at the Archives of Appalachia. Archivist Jennifer Bingham gave us many wise tips on displaying family treasures such as photographs, certificates, medals, etc. Unless you are storing your memorabilia in a dark, acid free-box in a climate controlled environment, there is going to be some damage, but the goal is to be able to enjoy the artifacts while mitigating the damage. Here are a few of her suggestions:
1. Try to increase the airflow around your items
2. Use acid-free/lignin-free materials as buffers
3. Don’t display items facing direct sunlight

So, keeping Jennifer’s tips in mind, I wondered how I could frame some of my towels while mitigating the damage to them. I didn’t want a framer to cut the fabric or stretch the fabric. I don’t want it smooshed tightly up against glass (violating tip #1). I decided upon a shadow box that was deep enough to allow airflow as well as provide space for the extra, unseen fabric. I could line the frame with acid-free paper to act as a buffer and I could make sure not to hang the frames in direct sunlight. Finally, I had a plan!

I started by steaming the creases around the stitched images. 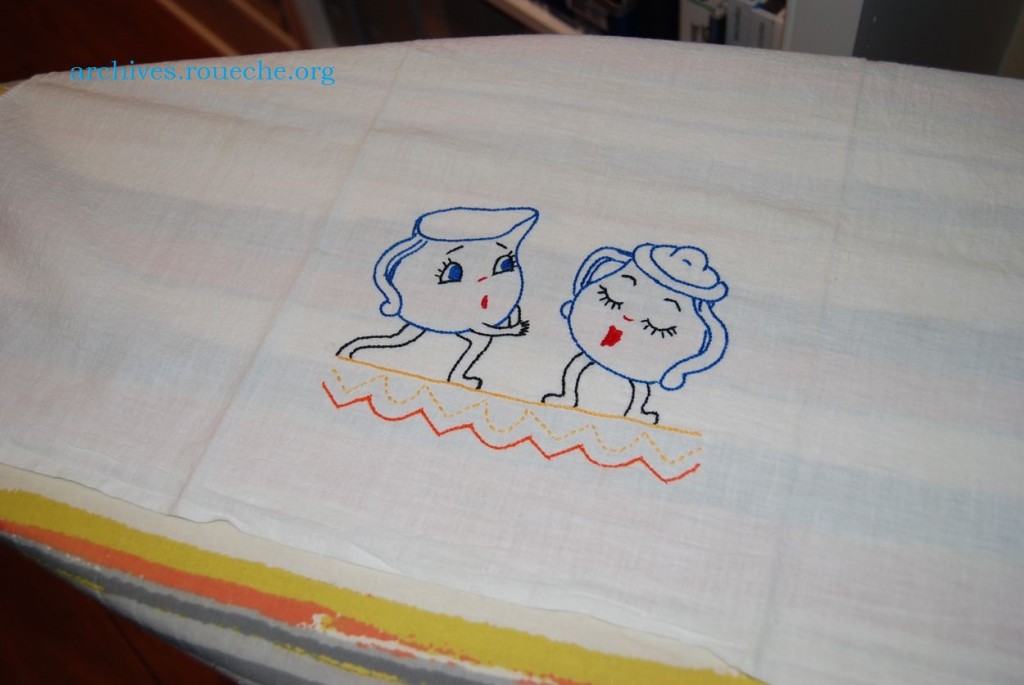 I set aside the towels to cool and relax while I prepared the shadow boxes. 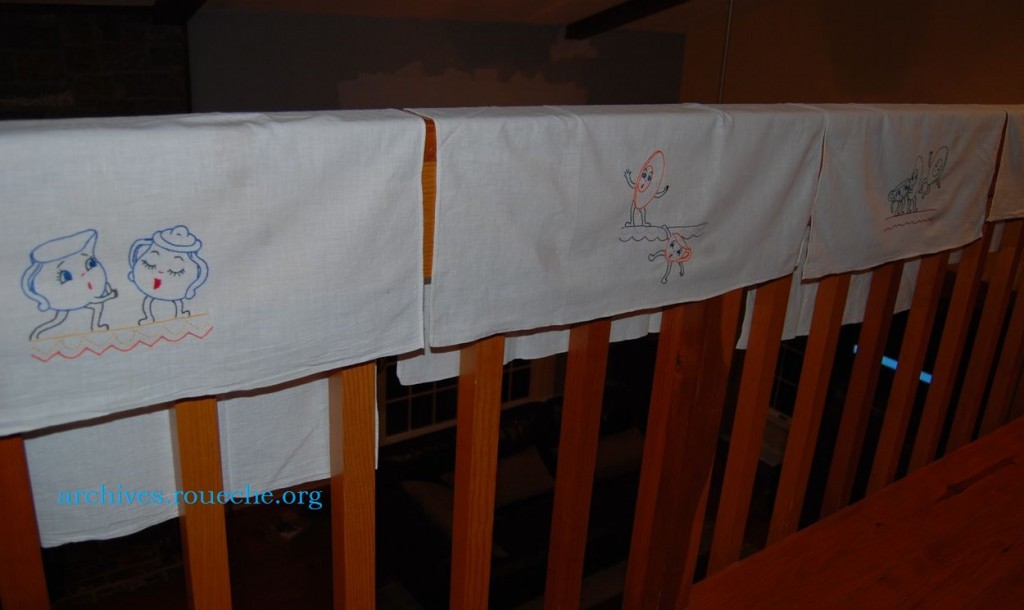 I cut foam core to the interior dimensions of the boxes minus 1/8″ inch on the sides to leave room for the textile. 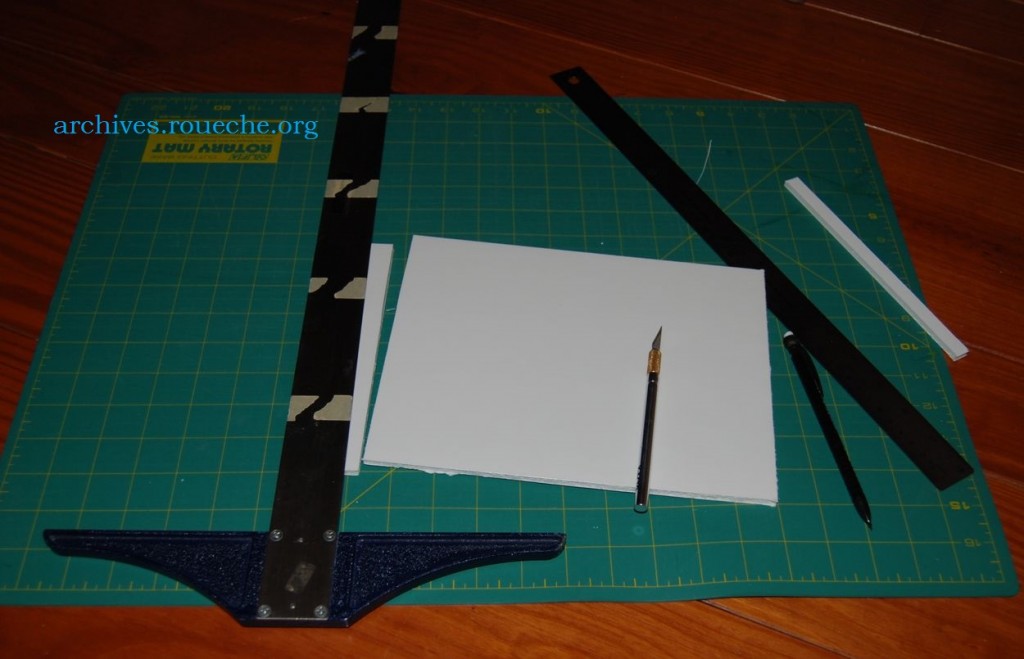 Next, I cut acid-free/lignin-free cardstock to line the sides and back of the boxes. 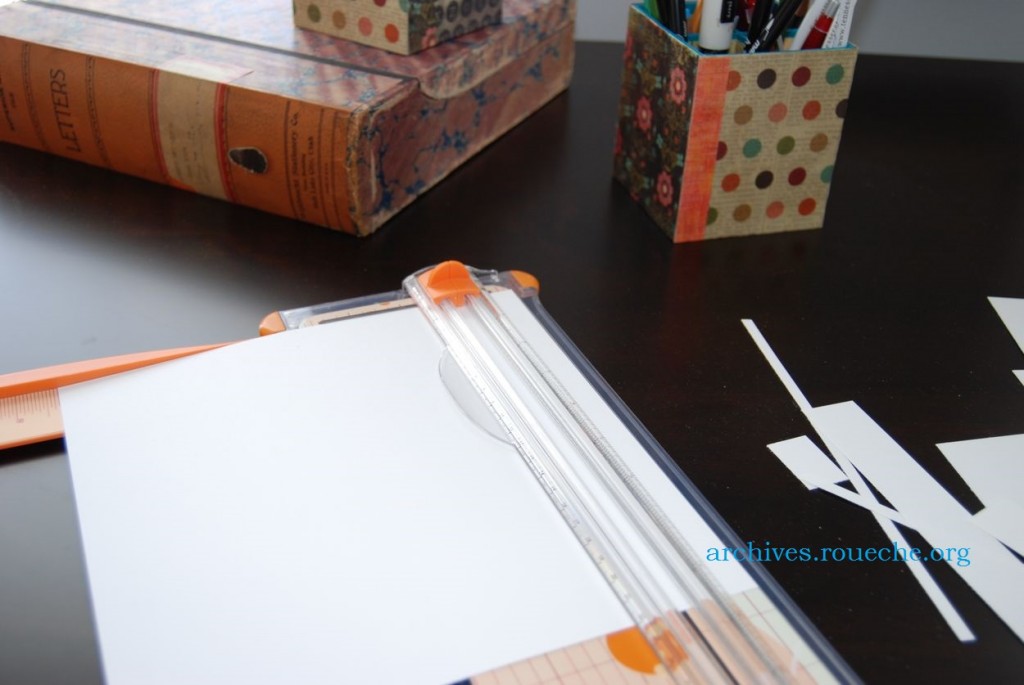 I attached the buffer paper to the frame backs with two adhesive photo squares. 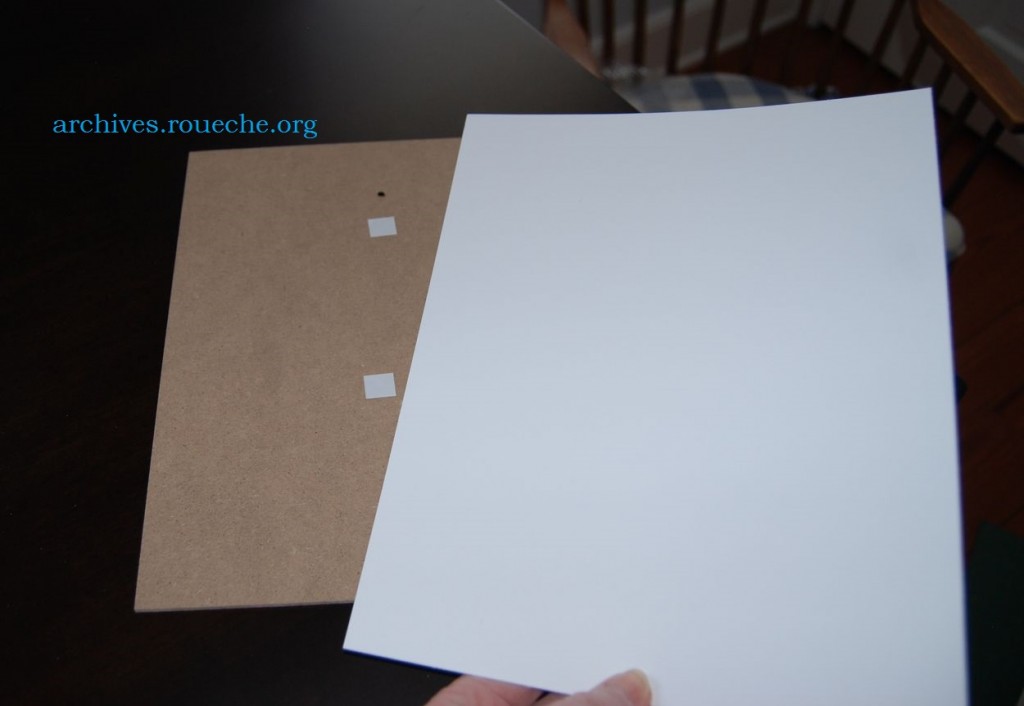 I then positioned the foam core under the image. 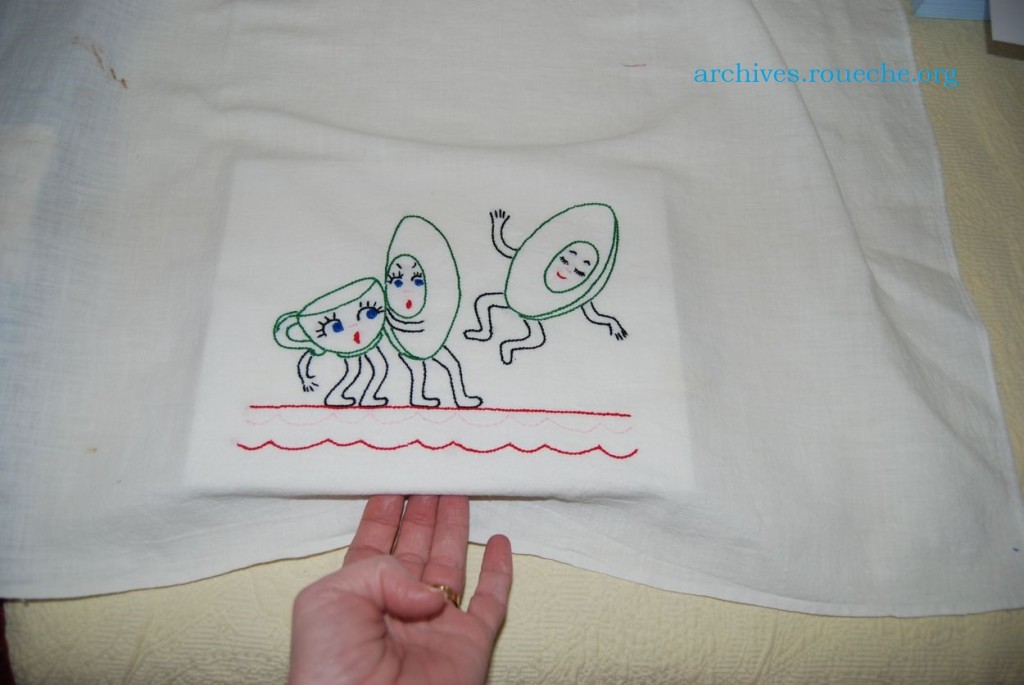 I did not stretch the fabric across the board and it is only very loosely tacked on the back with just four little adhesive photo squares. 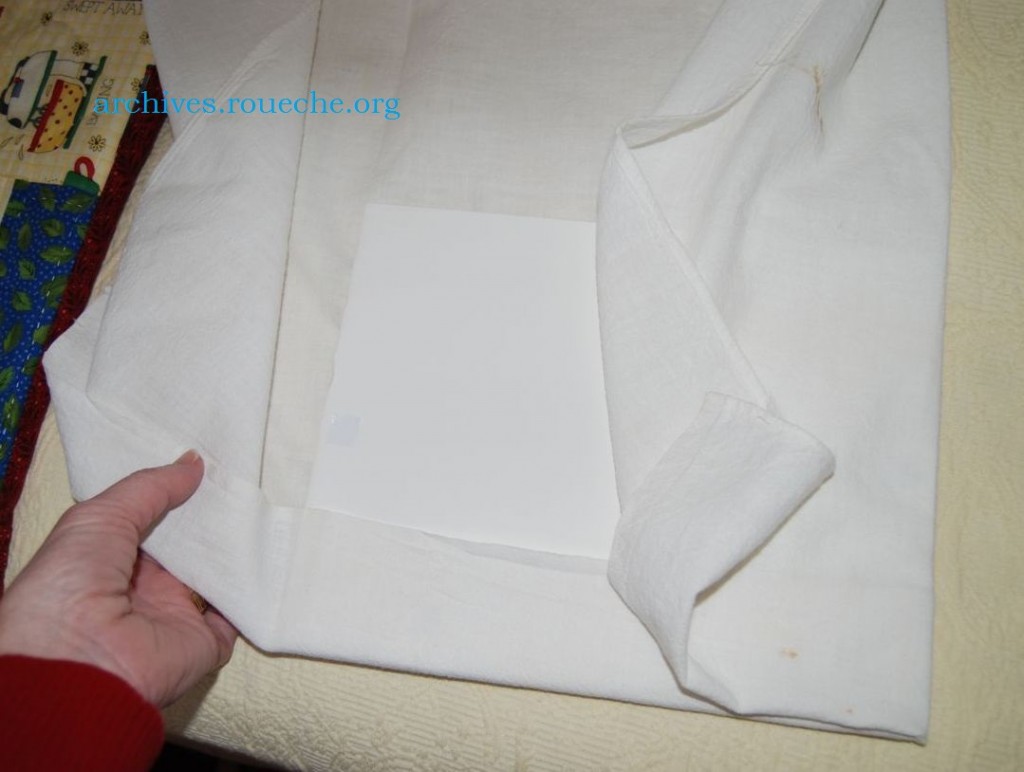 Next, I set the wrapped foam core inside of the shadow box and gently folded the excess tea towel, trying not to create sharp creases in the textile. 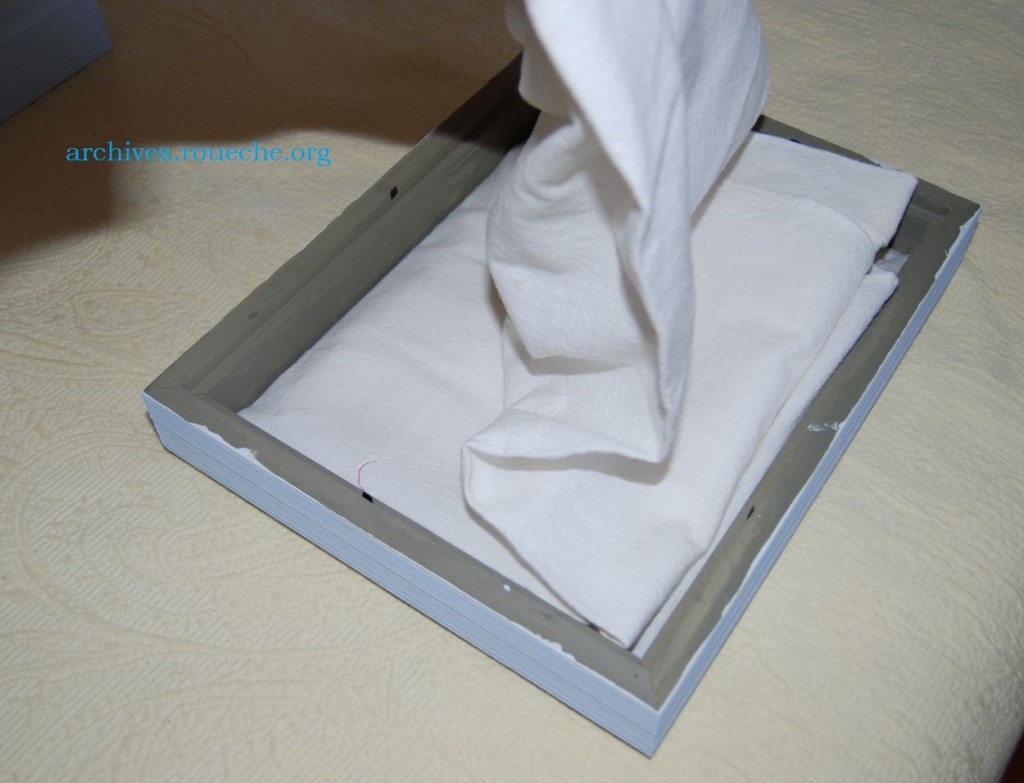 Lastly, I tucked my pre-cut buffer paper into the sides of the frames, effectively lining five sides of the box with acid-free paper, and secured the previously lined backing in place. The sixth side is glass. (Wood should be kept as far away from your textiles as possible.) 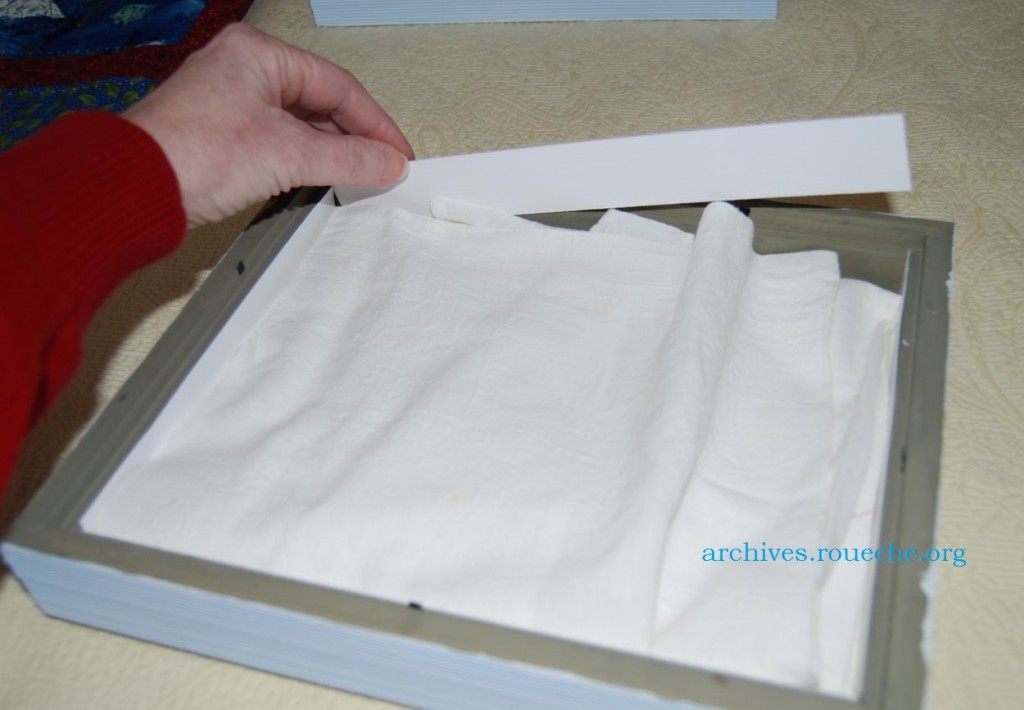 Here are the finished shadow boxes. I could be even more careful by rotating these four with the remaining two towels.

For those of you who aren’t as brave about using vintage linens in your homes like my Twitter friend and author-illustrator Susan Branch is (click for her amazing collection), I hope I’ve given you a little inspiration about how you can display your family treasures.

This entry was posted in Genealogy and tagged ephemera, genealogy, preservation, Williams. Bookmark the permalink.

5 Responses to Genealogy: On Display