Contrary to the popular song, David Crockett was not born on a mountain top in Tennessee. A friend and I recently visited the Davy Crockett Birthplace State Park. Along the banks of the Nolichucky River, visitors can examine a replica cabin and read detailed narrative boards about the former politician, soldier, and frontiersman. 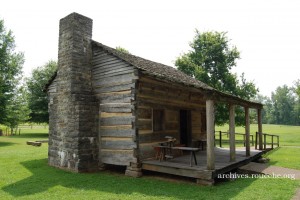 Davy was born to John and Rebecca Hawkins Crockett near the bank of Limestone Creek in present day Greene County in 1786. Davy was the 6th of 9 children in a very poor family. His parents moved many times and Davy spent much of his youth working away from home to pay off family debts.

Following is a brief photo essay of what you will see at the birthplace.

A monument at the birthplace site is encircled with stone markers from all 50 states. 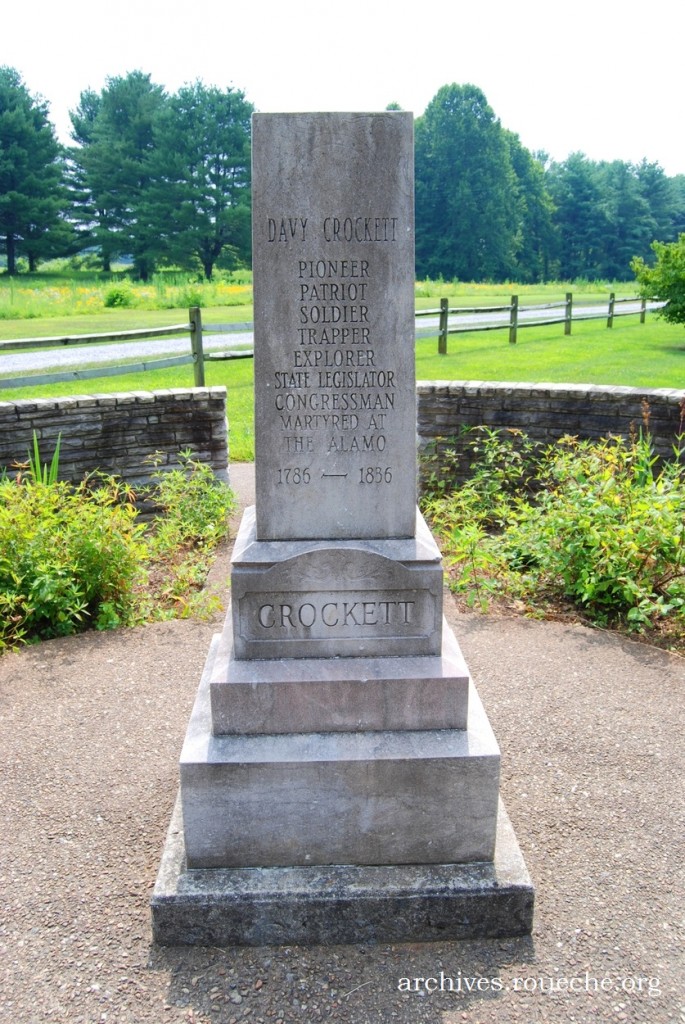 Workbench on the front porch. 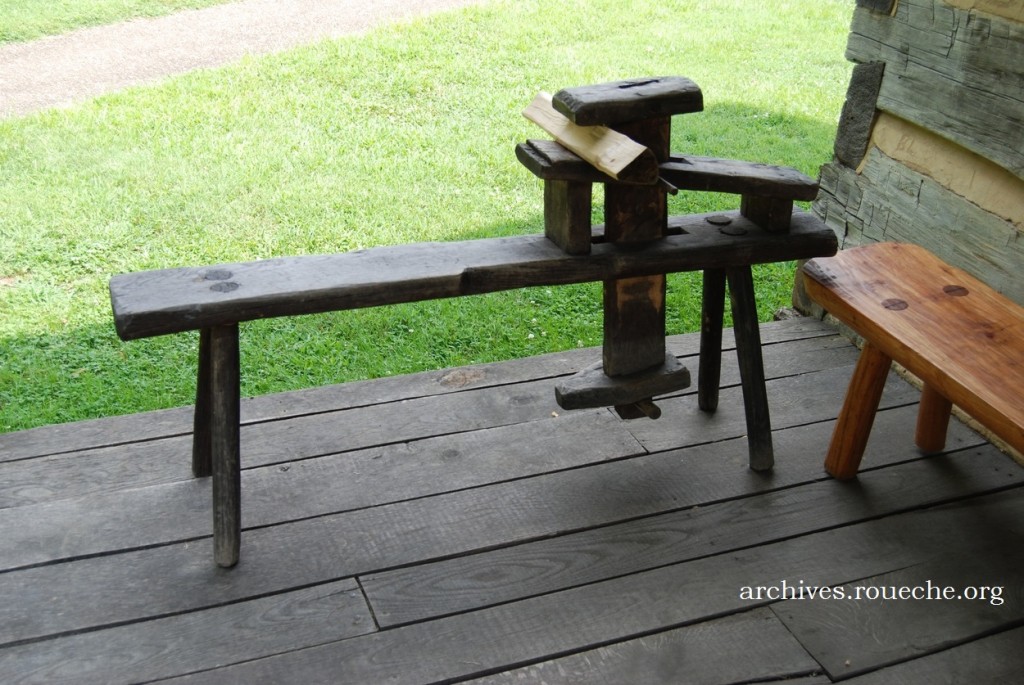 You can’t step inside the cabin, but you can take a peak through the front door. 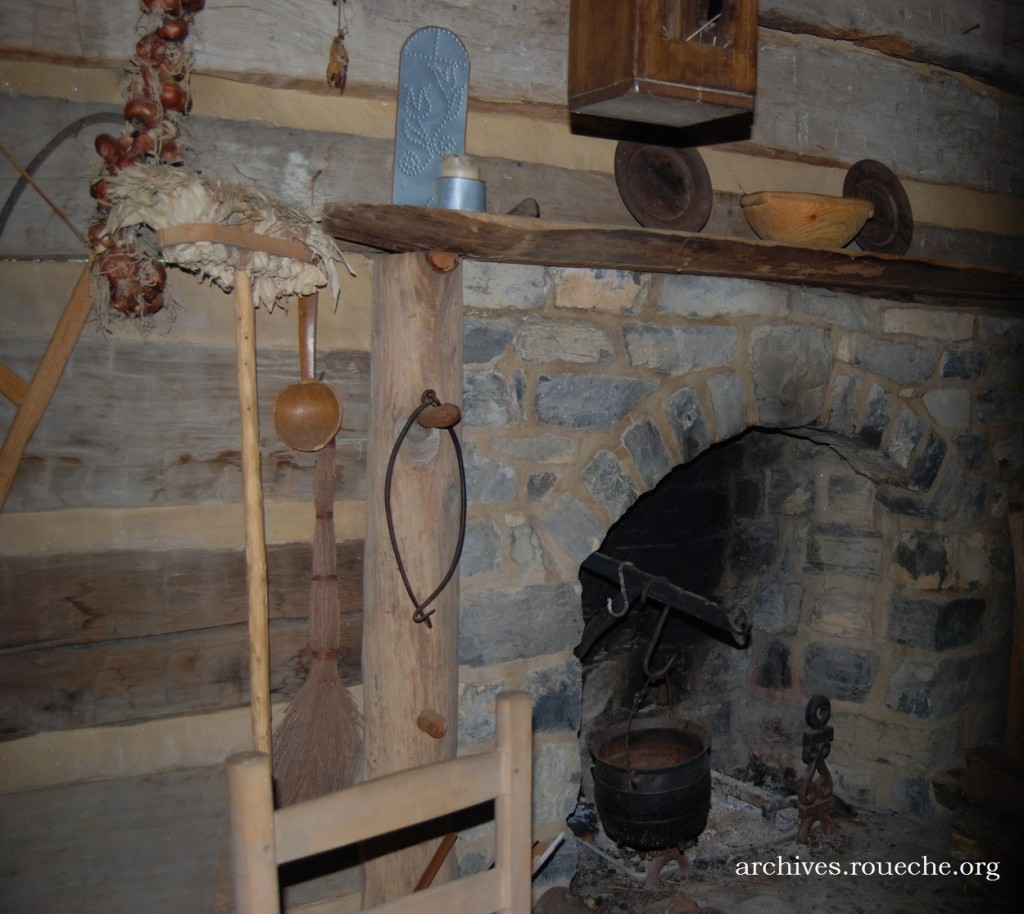 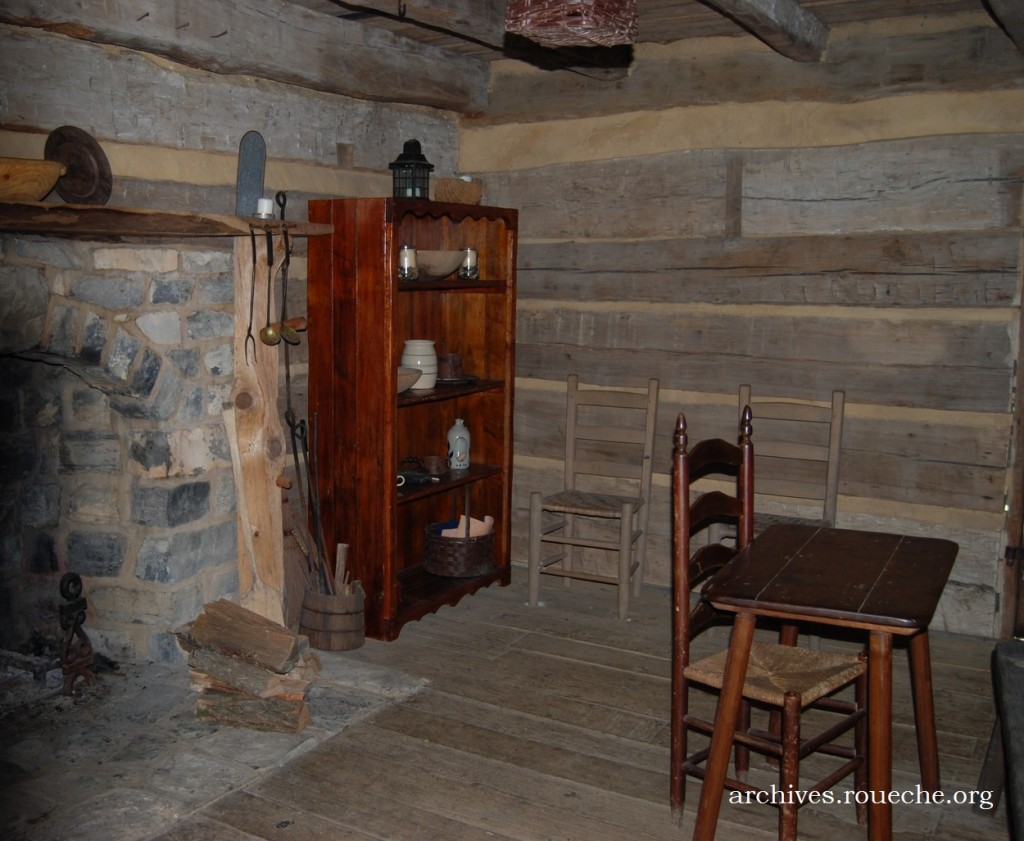 The ladder leading to the sleeping loft. 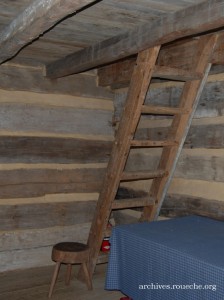 The back side of the cabin. 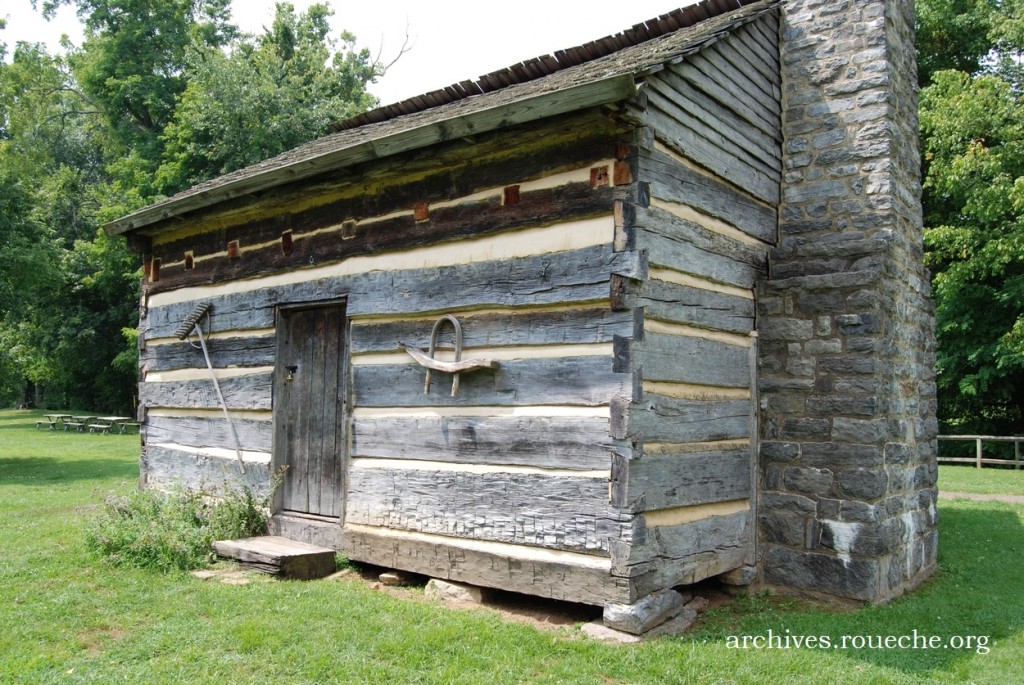 Corn crib in the yard. 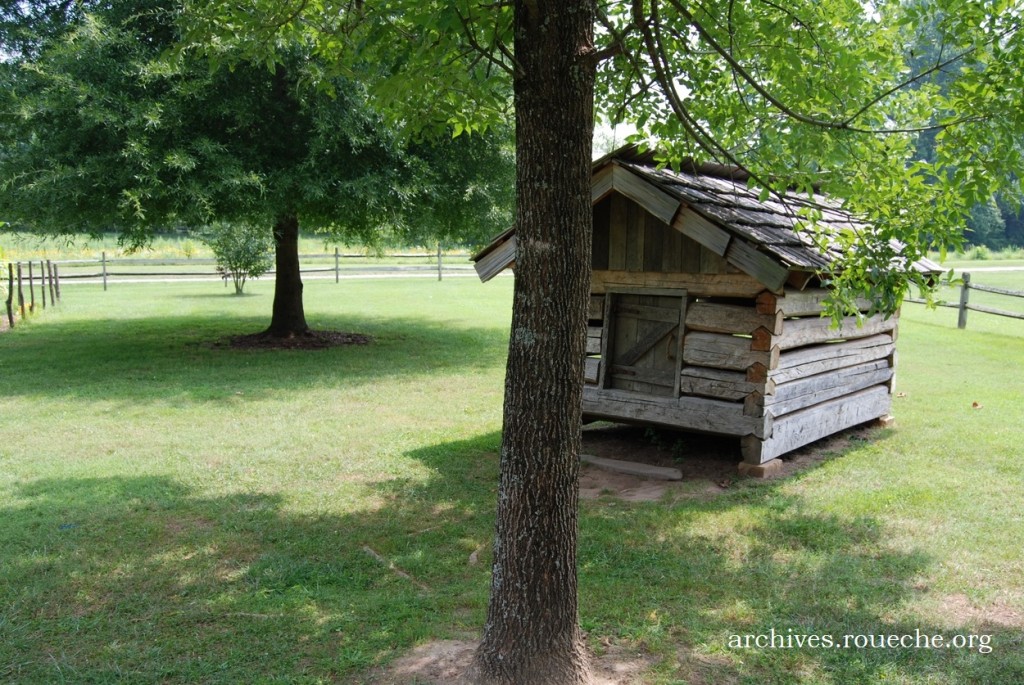 The Nolichucky River is just a few hundred feet from the porch. 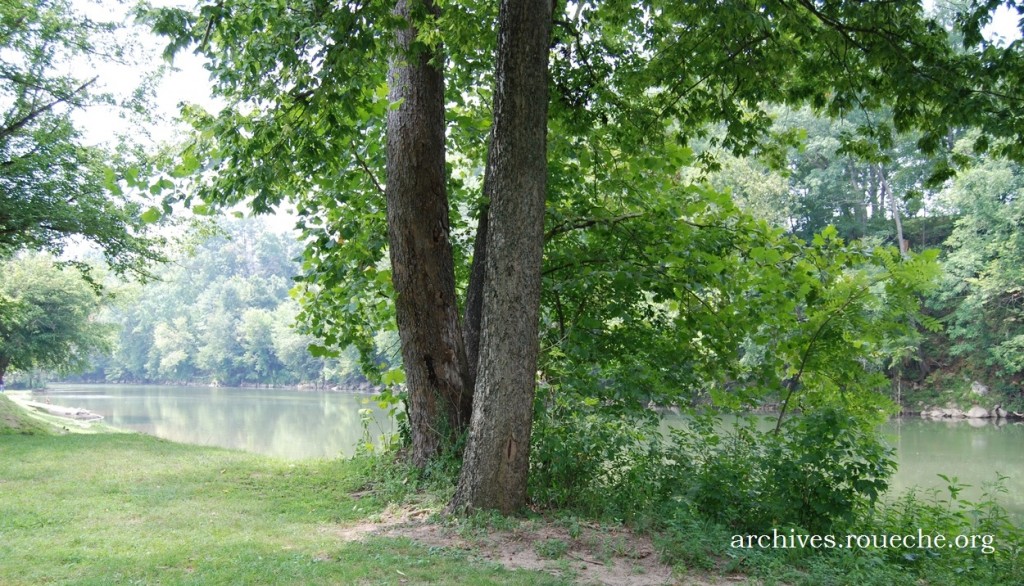 Next, we traveled to Morristown, Tennessee, which is where Davy’s parents ran a tavern beginning in 1796. The tavern did not survive but in the 1950s a log structure was built from donated materials and serves as a museum for the Hamblen County Chapter of the Association for the Preservation of Tennessee Antiquities. It approximates a tavern structure of the frontier era with a small addition to provide more display space. The interior is completely furnished with items from the late 18th and early 19th centuries. 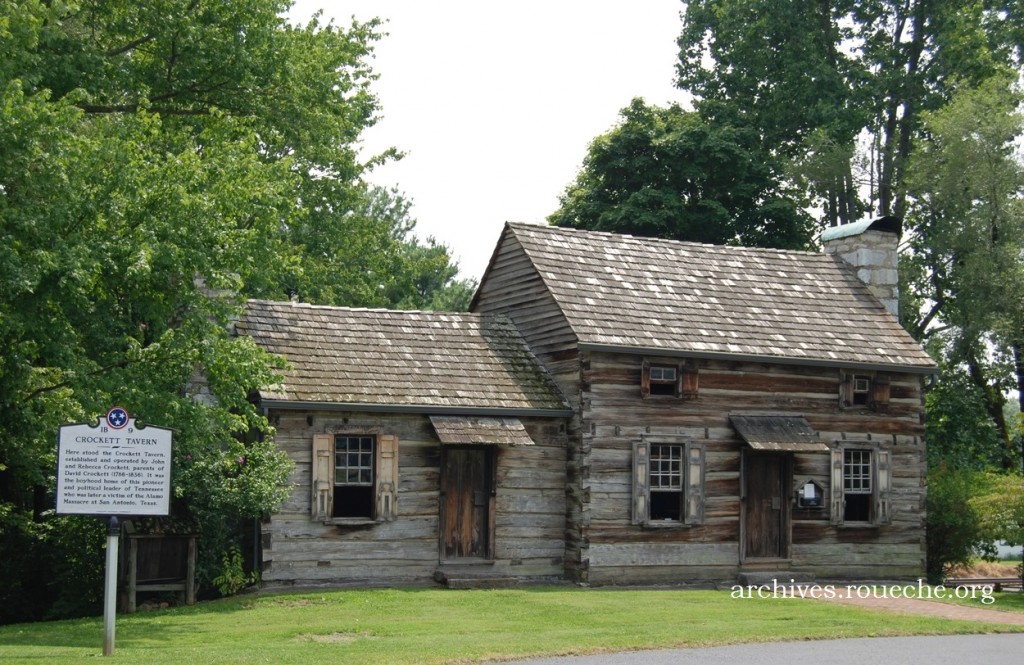 My friend Charlotte and I were fascinated with the locking mechanism from the Crocketts’ time and that is still used on the front door, today. 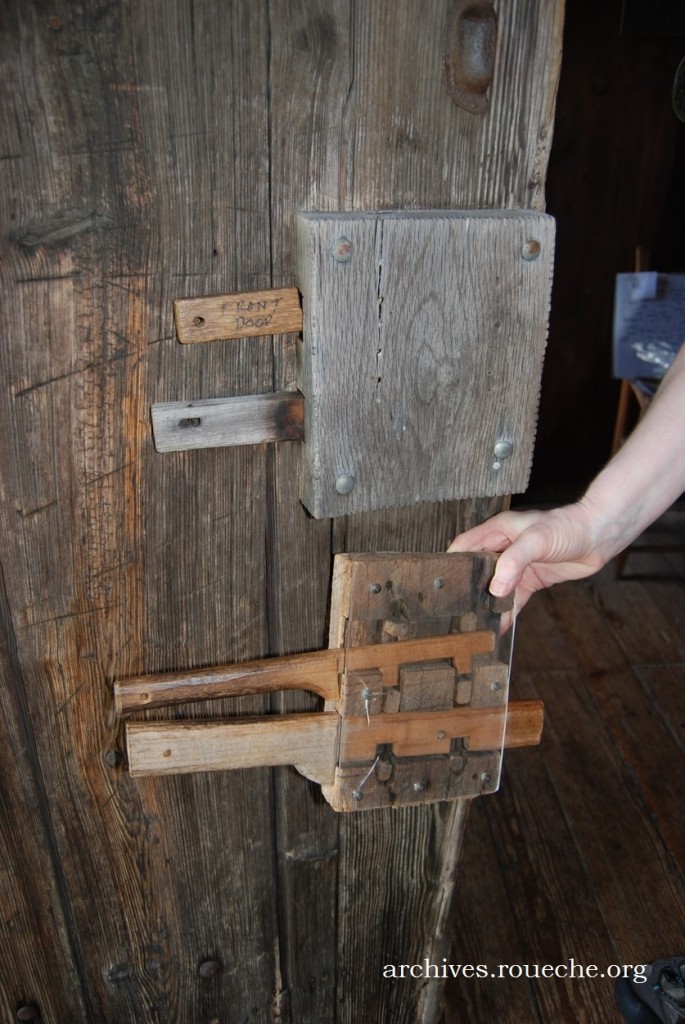 Here is a close up of what the lock looks like with the front panel removed. The thinner lever is the key and is removable. 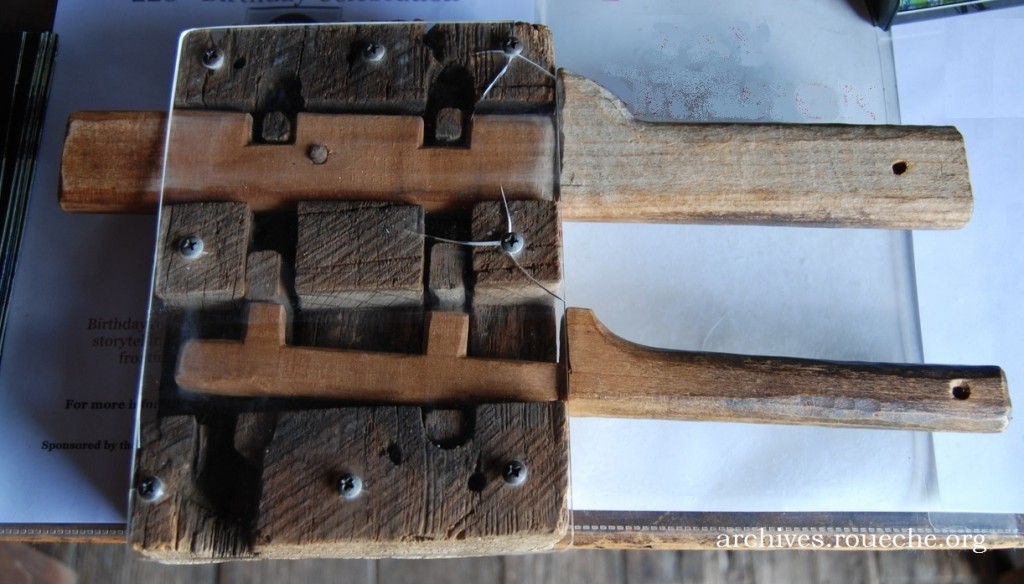 Association member Sally demonstrates how each key is unique. 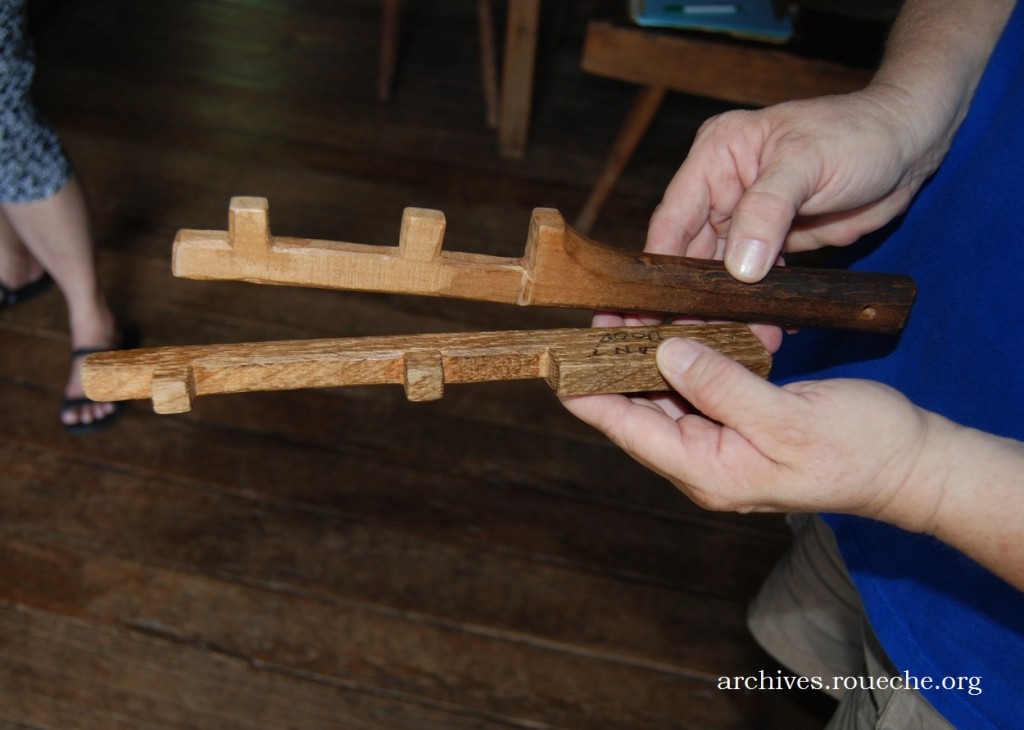 The main floor space where the guests would have eaten and where the Crocketts would have lived and slept whenever the sleeping loft was full. Notice the beautiful ceiling joists. These were part of the donated materials. In the 18th century they would have been rough log joists. 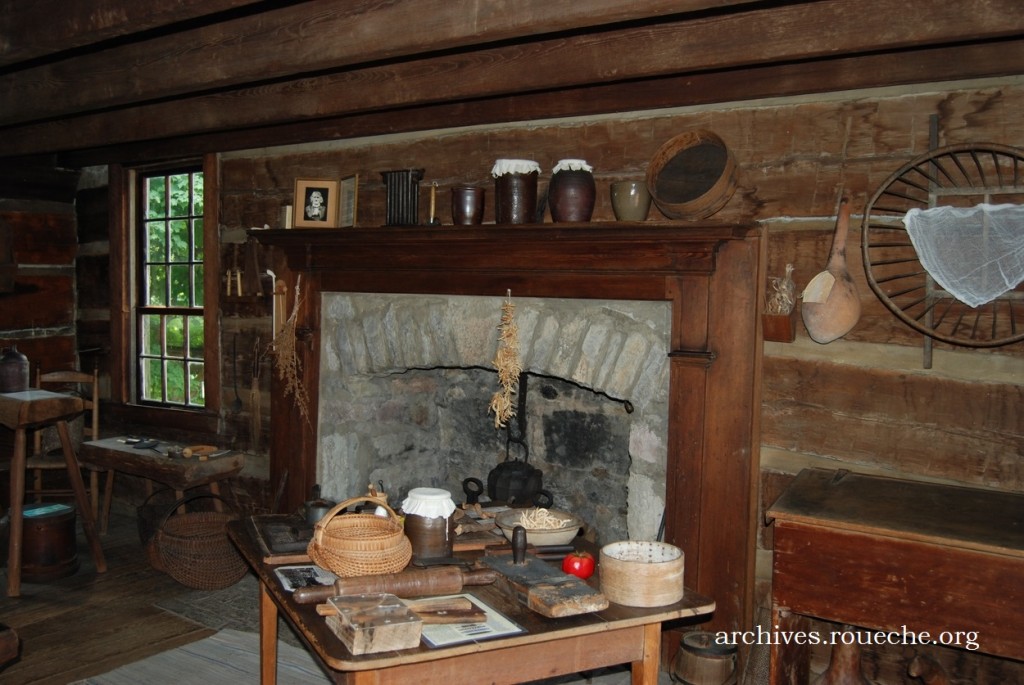 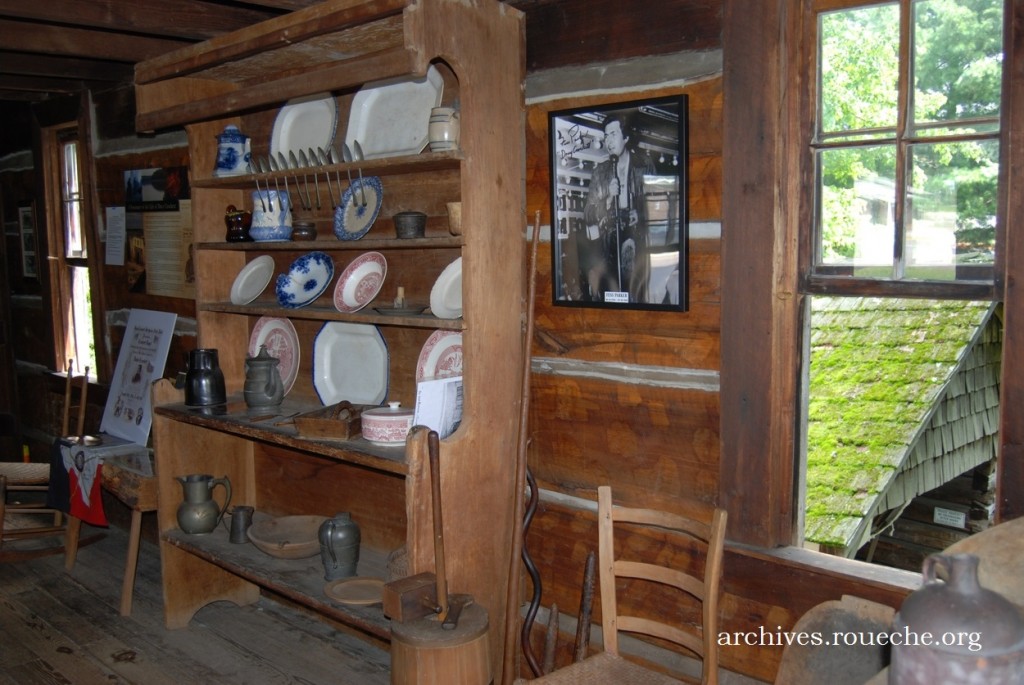 Modern visitors take stairs up to the loft, but in frontier days, guests would have climbed a ladder. Notice the tools on the ticking mattress for tightening the bed ropes. 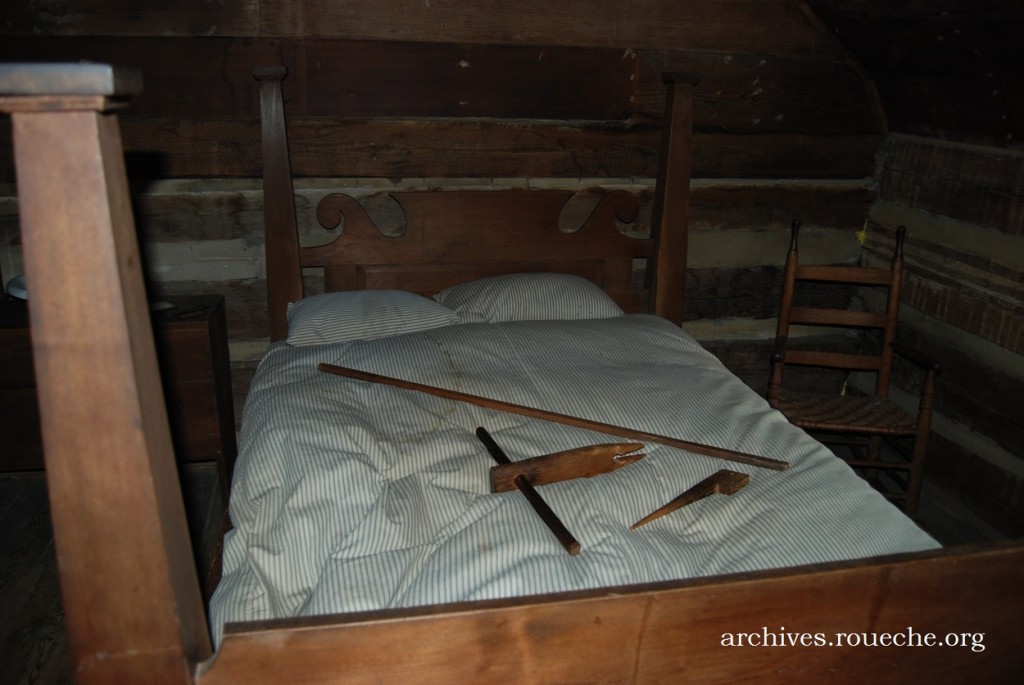 Sally, who was a wonderful guide and has done an impressive amount of archival research, informed us that the Crocketts may or may not have had beds in the loft. Overnight travelers and herdsmen may have just used bedrolls. The loft over the bedroom is set up with the most amazing period beds from the late 1700s and early 1800s. The loft over the addition is set up more humbly. She also told us the Crockett Tavern would not have had windows upstairs. 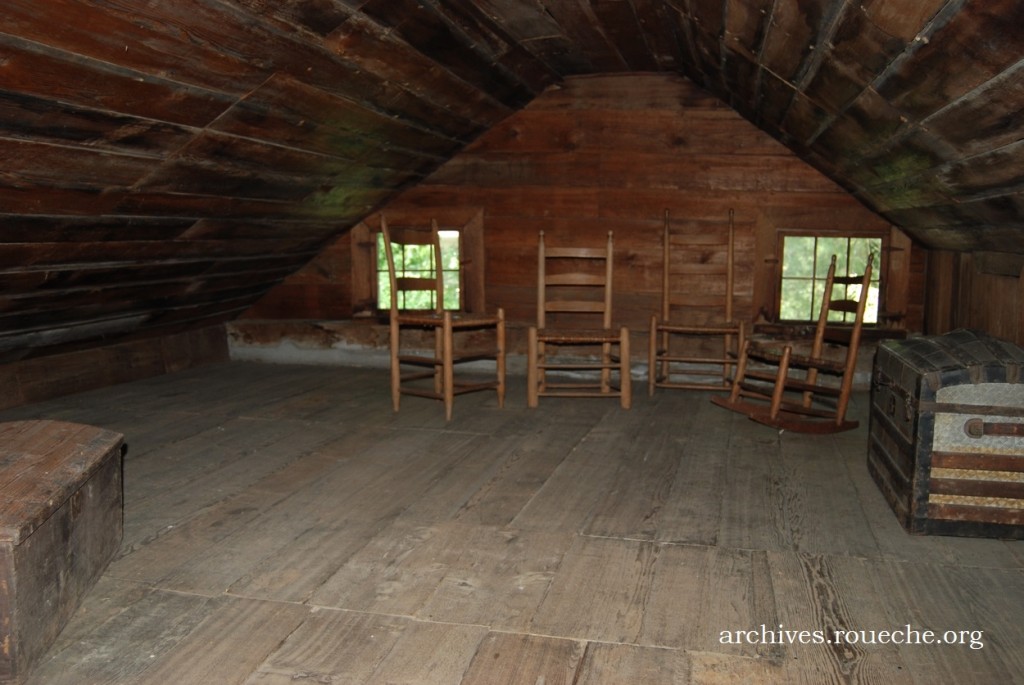 Loft door that would have been reached by climbing the ladder. It is only about 3 feet high. 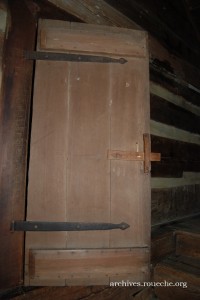 Throughout the museum, the staff have copies of court records, family photographs, ledger entries and other archival materials that document the lives of Crockett family members and their business. I learned so  much.

Next we went down to the basement to view display cases of fascinating historical items. 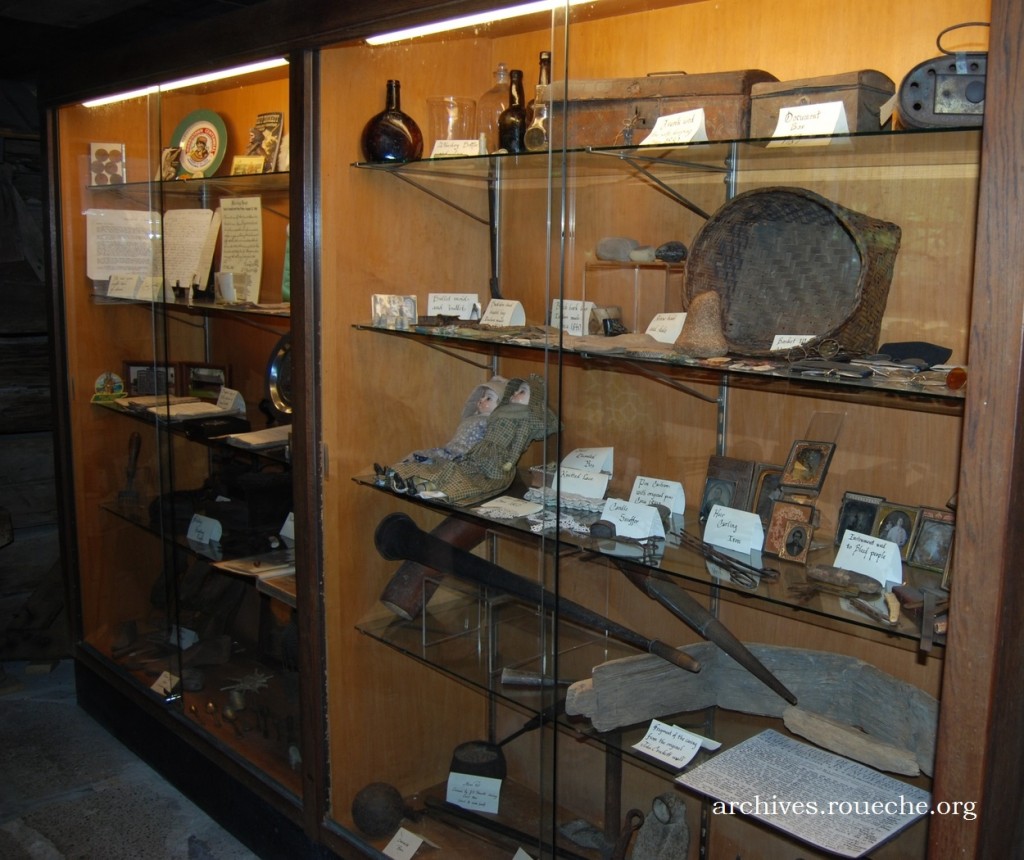 My favorites from this case were the first edition books written by Davy himself and this children’s reader which reminded me of my own recent encounter with a bear (ah, life in Tennessee). 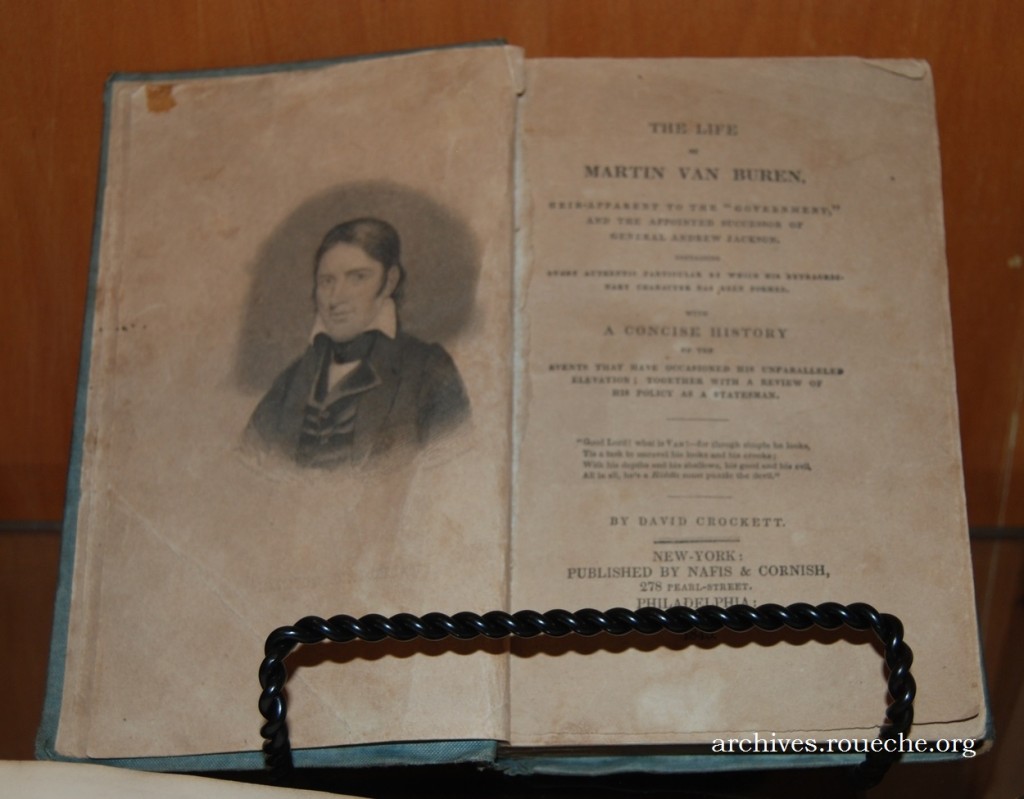 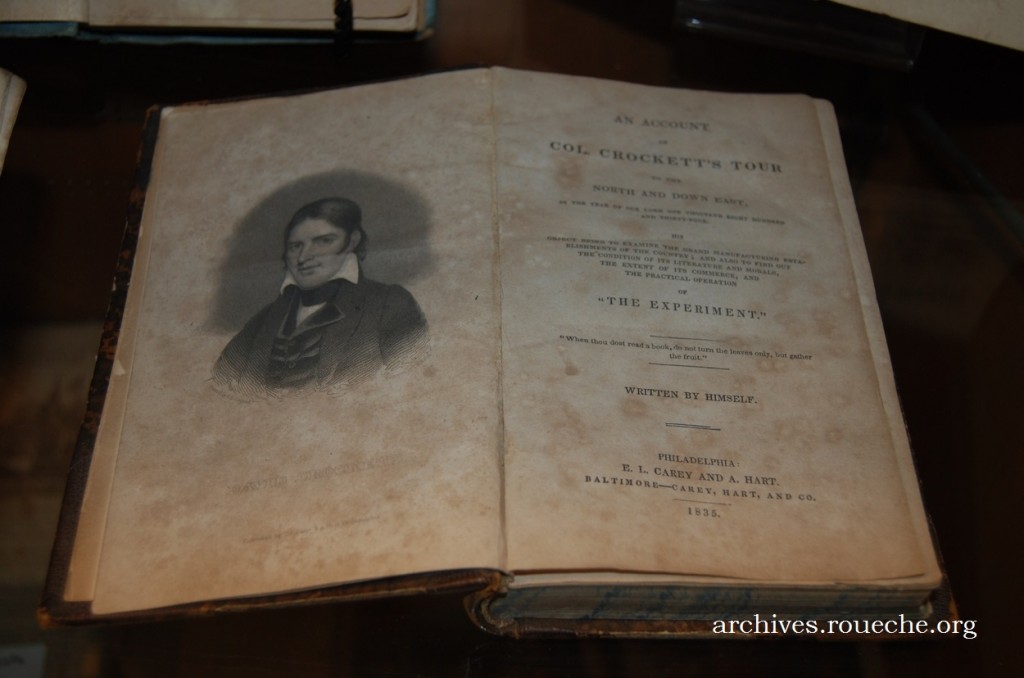 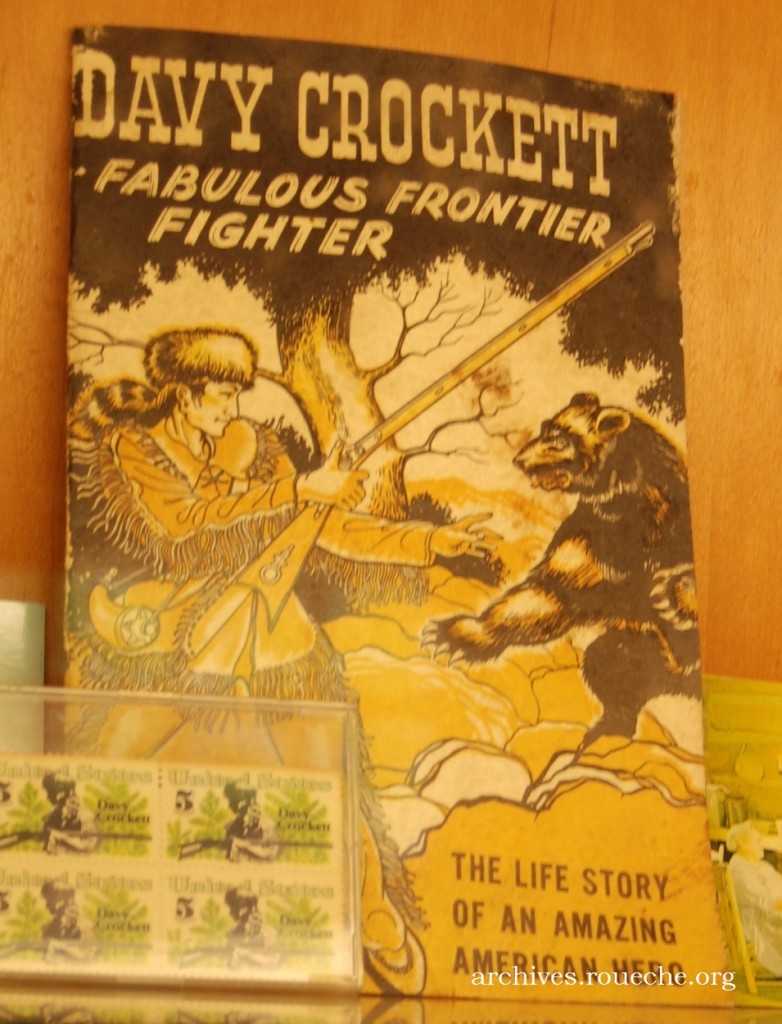 The case on the opposite wall housed authentic, period tools. 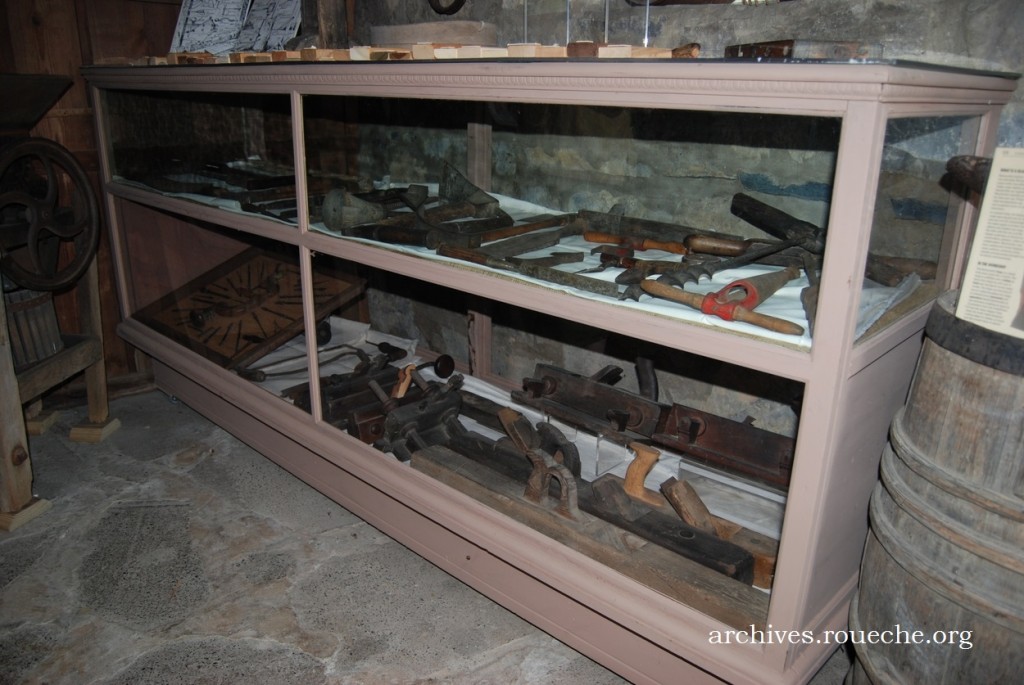 The Crocketts leased the tavern and several outbuildings from a wealthy landowner. At one point they also occupied a smaller cabin on the property, but it was later burned after a smallpox epidemic and no longer stands. 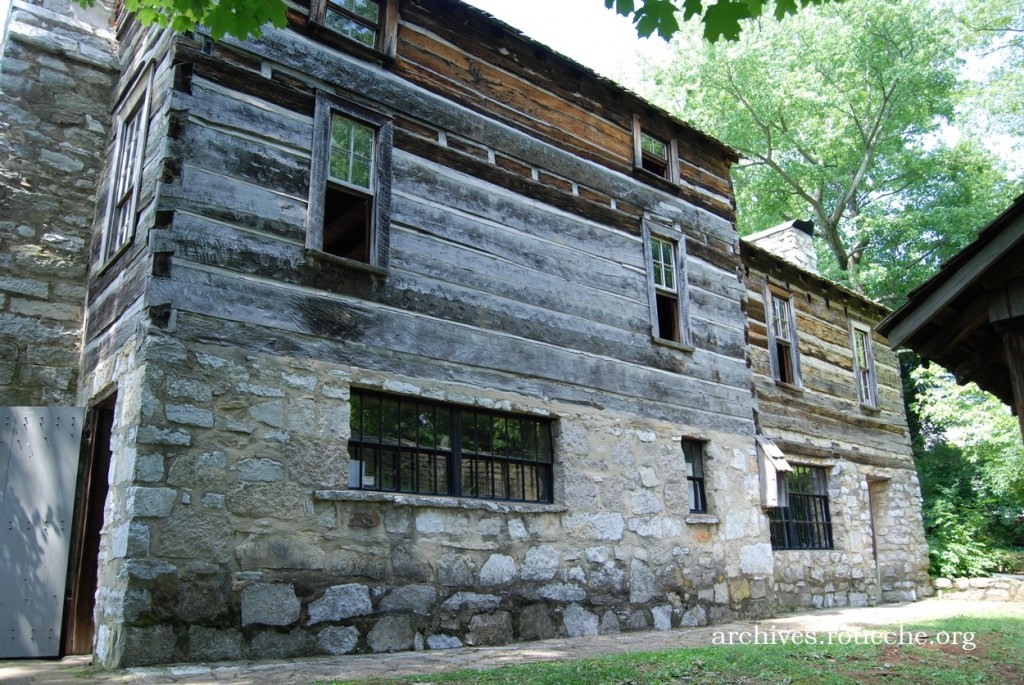 The basement of the addition, which you see above on the right, is currently being used as a weaving demonstration room. It is the only part of the structure that has a more historically accurate ceiling structure. That’s Sally, the volunteer who told us $25 worth of information for only $5! 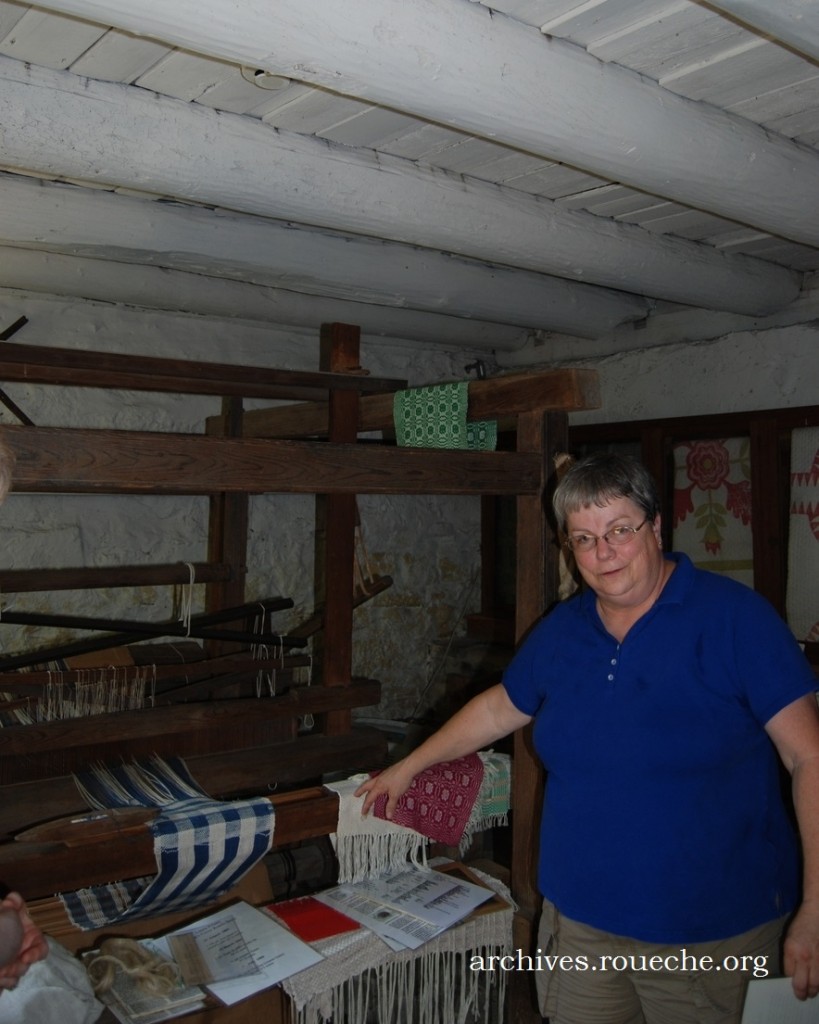 Both Davy and his father were mill owners at different points in their lives and both men had their businesses destroyed by flooding. An 1821 flood destroyed Davy’s grist mill in Lawrence County, TN (his father’s had been near Cove Creek). The tavern museum has a millstone recovered from one of these two sites. 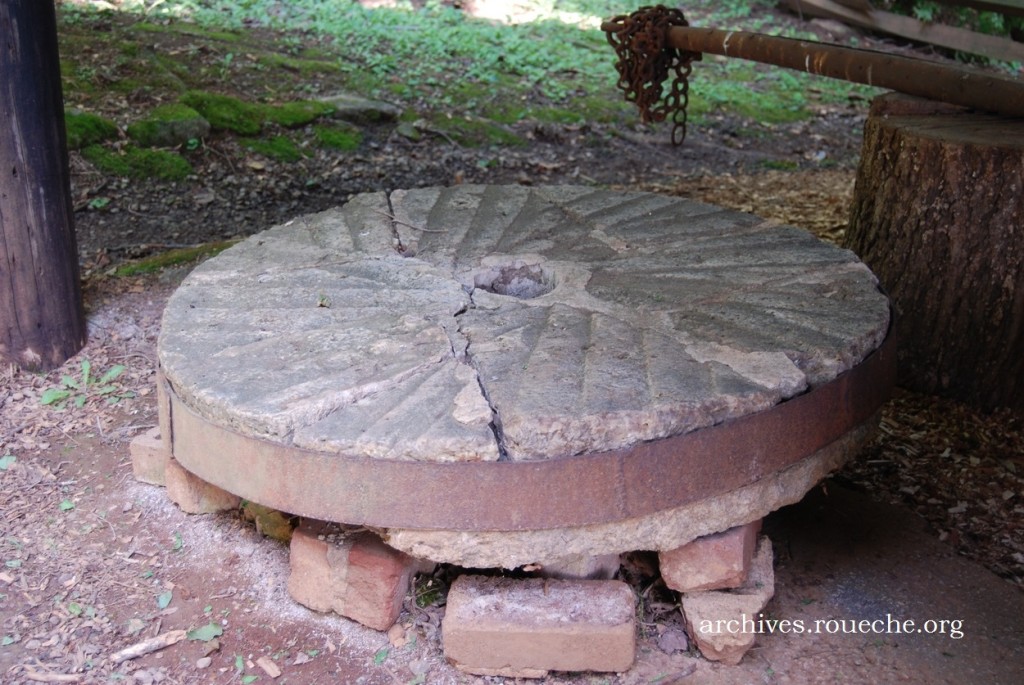 David Crockett married twice. He had three children with his first wife, Polly. Then, after her death, he married Elizabeth Patton, gained two step children and had another three. He served in the Tennessee Militia, the Tennessee Legislature, and the US Congress before joining the movement for Texas independence from Mexico. He was killed at the Alamo on March 6, 1836. 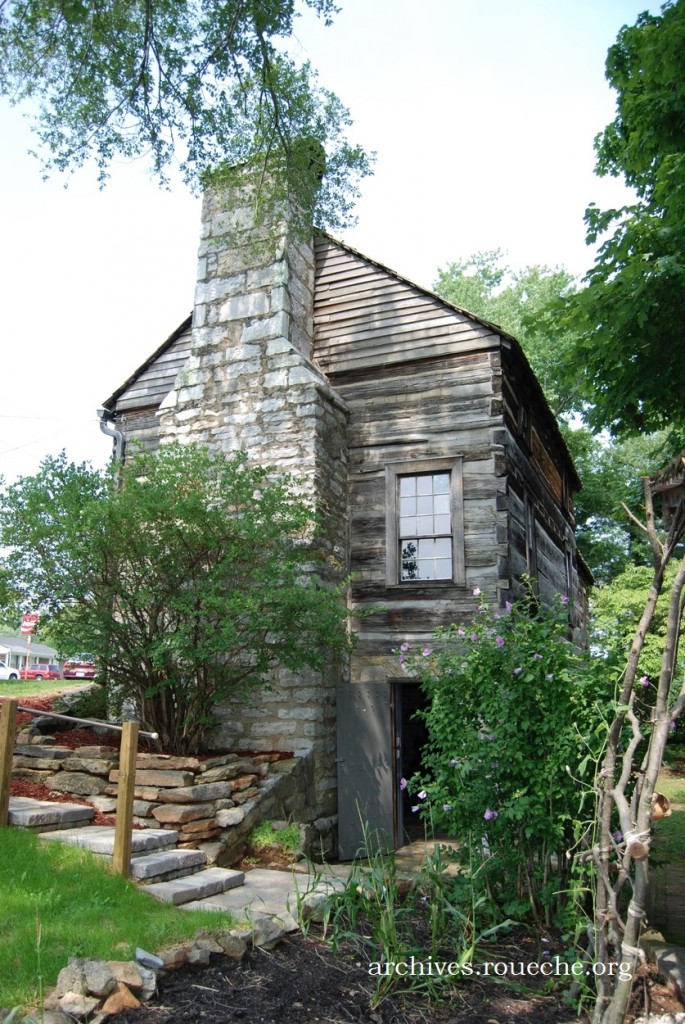 Feature image: Burial place of Davy’s grandparents, David and Elizabeth Hodge Crockett, who  were killed in an Indian attack in 1777 in Rogersville, TN. Photograph by Jim Agar on findagrave.com

David Crockett on political speech-making: “The thought of having to make a speech made my knees feel might weak, and set my heart to fluttering almost as bad as my first love scrape with the Quaker’s niece. But as good luck would have it, these big candidates spoke nearly all day, and when they quit, the people were worn out with fatigue, which afforded me a good apology for not discussing the government.”

This entry was posted in Field Trip and tagged Crockett, historic sites, Tennessee. Bookmark the permalink.

3 Responses to Field Trip: A Day with Davy Crockett