I have been trying to nail down the exact birthdates and given names of a family on my father’s paternal side, that of John Gillis and Margaret MacFarlane. I have a well-researched genealogy prepared by my late cousin Robert J. Gillis, but the dates are often estimates from census records or from published genealogies. Because of the naming patterns in this line, children frequently went by their middle names and several children in one family might have the same first name. Nicknames, rather than full given names, were often what was recorded on the census.I cannot be sure that I even have the correct birth order in John and Margaret’s family. So, I have come up with a strategy to help me refine the information my cousin has gathered and determine more accurate names and birthdates. The entry for this family is five pages long in Descendants of Gillis Gillis, Born in Scotland around 1770 (Gillis, Robert J., 1996). 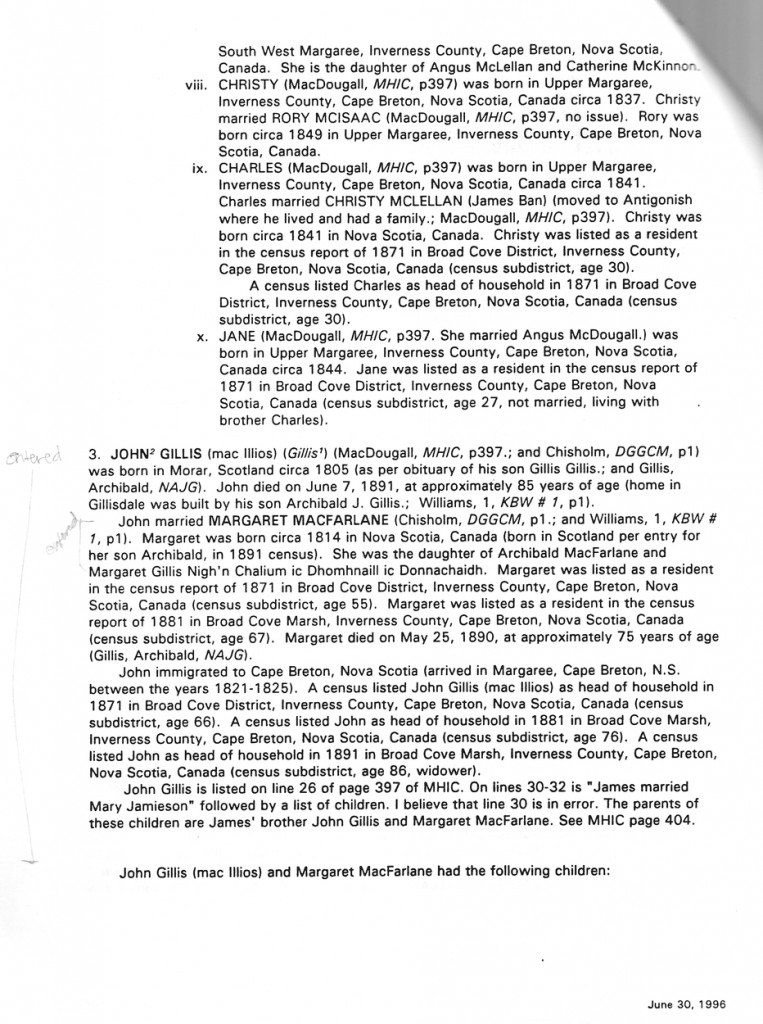 The Gillis Gillis genealogy shows they had 17 children. On page 2 of the family information, notice there is a John and a Duncan. I suspect that Duncan’s first given name is really John, as well. 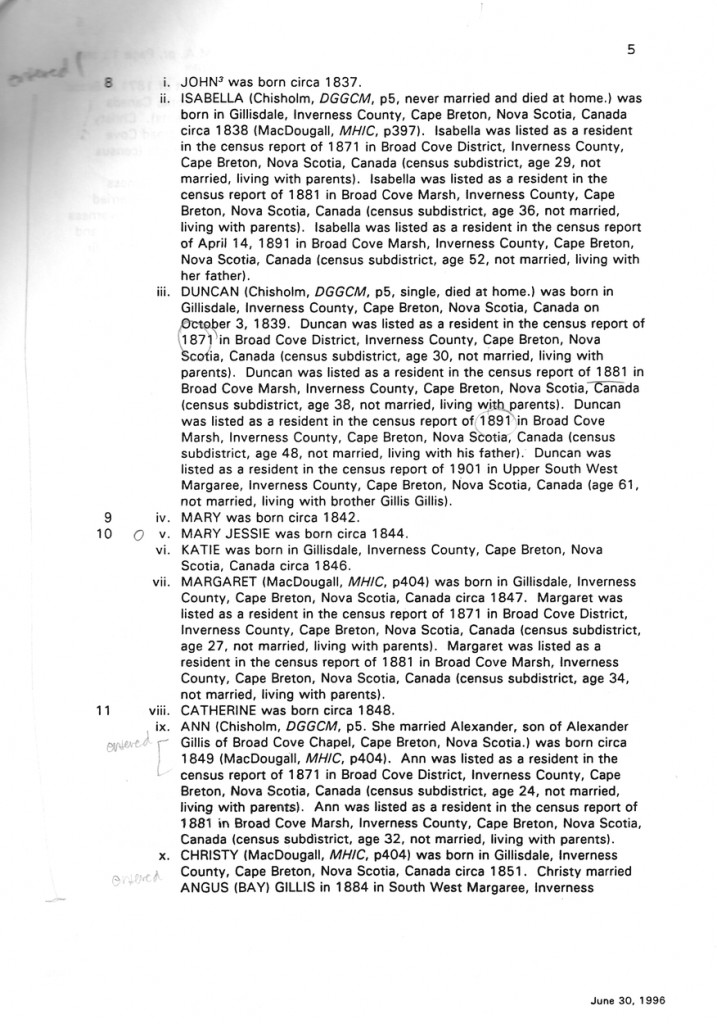 The first 10 kids including John and Duncan, are on this page.

Notice the extensive use of “circa”? Since census records rarely gave exact birthdates and survey information was generally given from memory, this poses a problem for researchers. 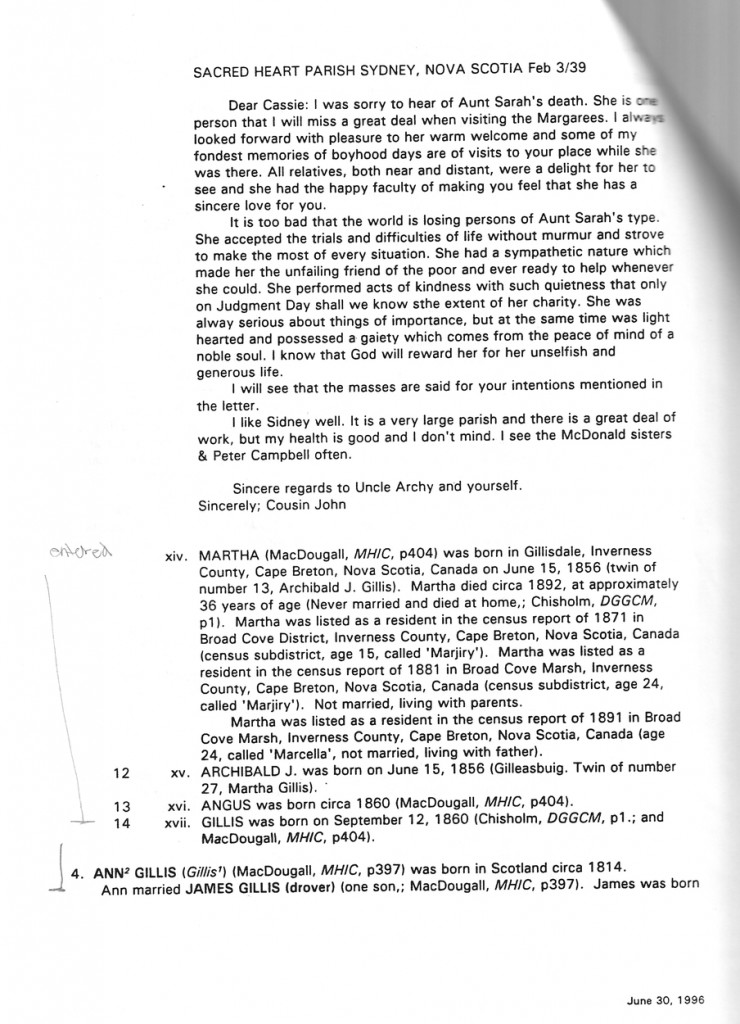 The final page for this family lists the last 4 children, including Angus and Gillis, whose birth order I suspect has been reversed.

Strategy: I am charting the family through several decades of census records by using blank forms that are available in many locations online. I printed mine from FamilySearch.org under the Search/Wiki tab. If your local library does not have them available, you can also retrieve them from The Library and Archives of Canada and the National Archives and Records Administration in the US. Google it! You’ll find them. 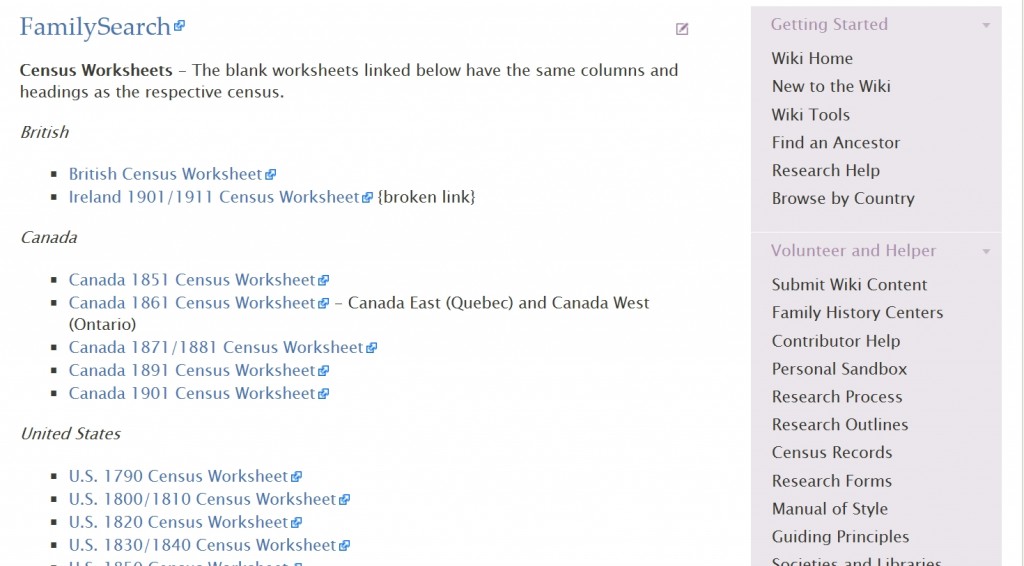 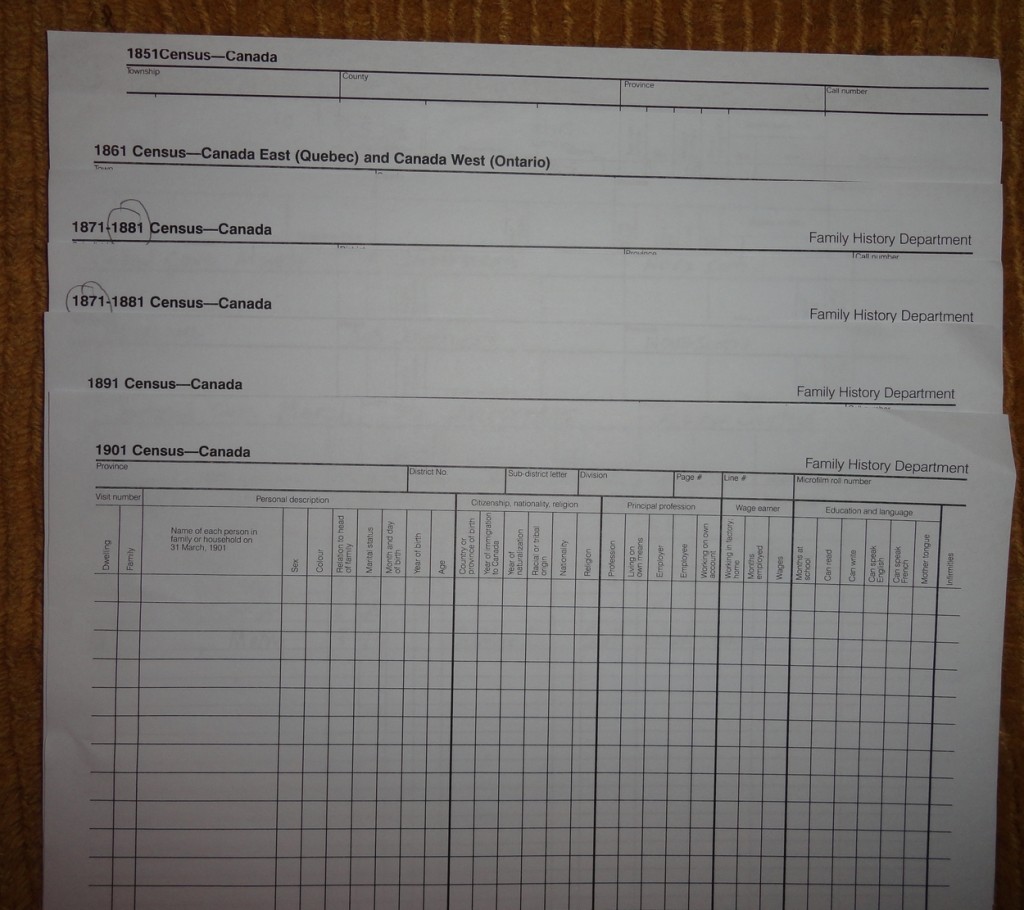 Strategy: Next, I filled in the forms by searching for John Gillis as head of household on Family Search.org and, when necessary, Ancestry.com. 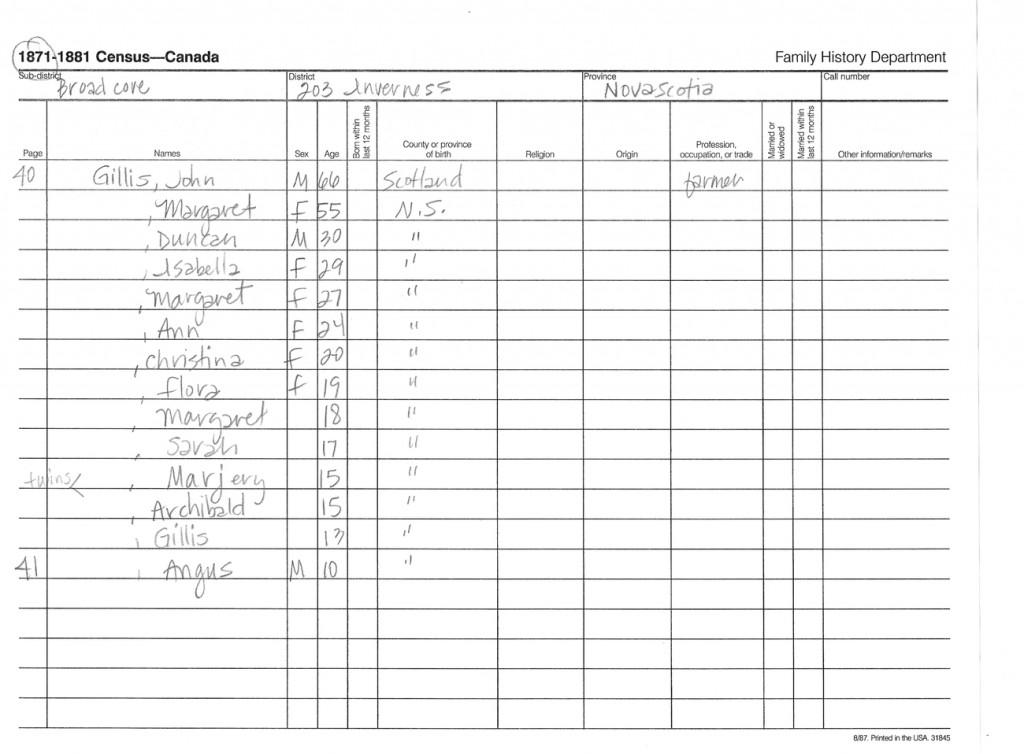 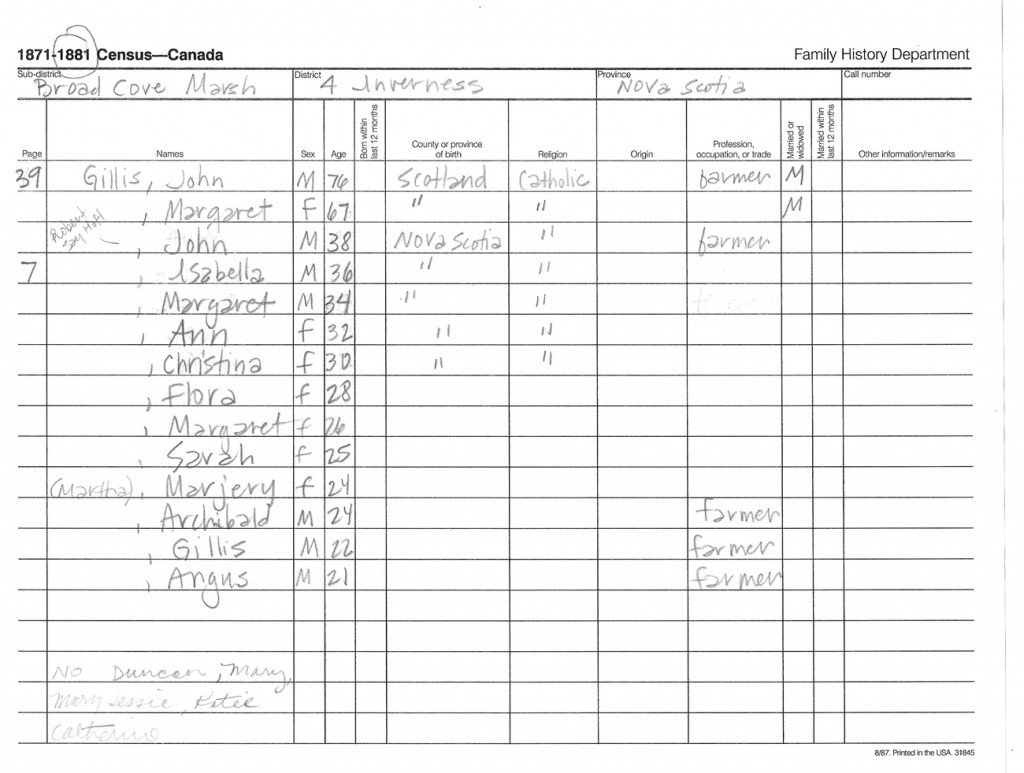 1881 Nova Scotia Census for John and Margaret with a different assortment of 12 kids.

I did this for three decades. Notice Gillis is consistently listed as older than his brother Angus, contrary to the Gillis Gillis genealogy. I am still confused about brothers John and Duncan, however, and Katie never shows up, so I fear she died very young.

Strategy: My next idea was to search for the brothers as heads of household as each one married because I have information that sometimes unmarried siblings would move in with married ones. Tracking this might allow me to pin down dates even more. To help me organize this idea and to keep my brain from exploding, I created a spread sheet. 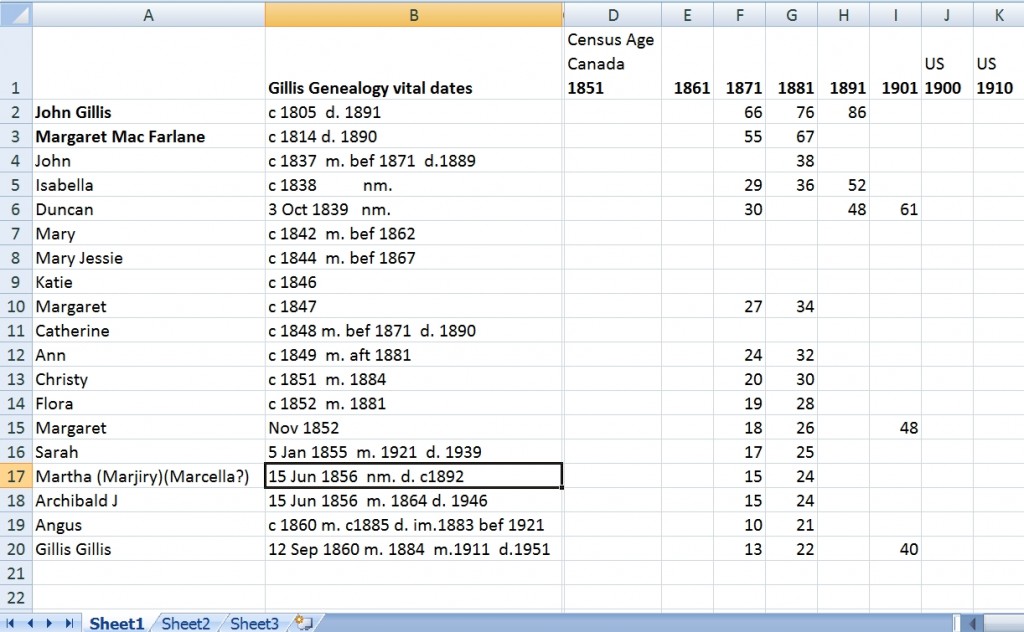 Strategy: As I find marriage records online (or an immigration record as in Angus’ case), I add this information to the spread sheet. The father John Gillis died shortly after the 1891 census was taken. His wife Margaret died the year before, so by 1901, I need to look for the children in separate homes.

So far I have discovered that single siblings Duncan and Margaret lived with their brother Gillis in 1901. If you can track someone to the 1901 census, your reward will be a complete birthdate, but are those entirely accurate? And that leads me to the last step in my strategy.

Strategy: Finish tracking all of the censuses for each family member and then locate and order parish microfilm records to verify as much as possible.

This entry was posted in Genealogy and tagged Canada, census, genealogy, Gillis. Bookmark the permalink.