Leroy Sprankle (1894-1972) was an important figure in the  City of Kingsport ‘s high school athletics and education history. The Archives of the City of Kingsport is fortunate to have a large collection of Sprankle’s scrapbooks, which include correspondence, photographs, clippings, and memorabilia. 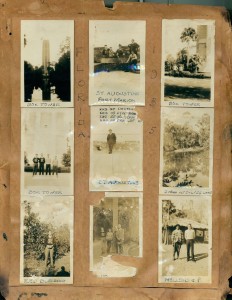 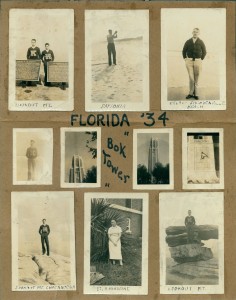 Leroy Sprankle coached Dobyns-Bennett baseball, basketball, football, and track from 1921-1943. He was known for promoting inter-state competition. The scrapbooks document many of the trips his teams took to Florida, other southern states, and even to Cuba!

In October 2013, the city archivist and I decided that one scrapbook in particular provided such valuable documentation of Kingsport’s history in the late 1920s and early 1930s that it should be scanned and digitized. During this process, I discovered that several photographs had been removed and placed on the cardboard-backed posters you see above. Because of the glue and acidic nature of the backing, the photos were in much worse condition than those that remained in the scrapbooks. I began to research the process for safe removal of the photographs by consulting with the conservators at the Church History Library in Salt Lake City and with Carol Roberts of the Tennessee State Library and Archives in Nashville. Here is a little photo essay documenting those processes. 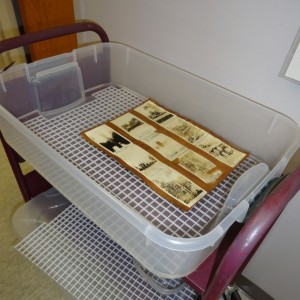 Setting up a water bath to remove the glue and backing from the photos. 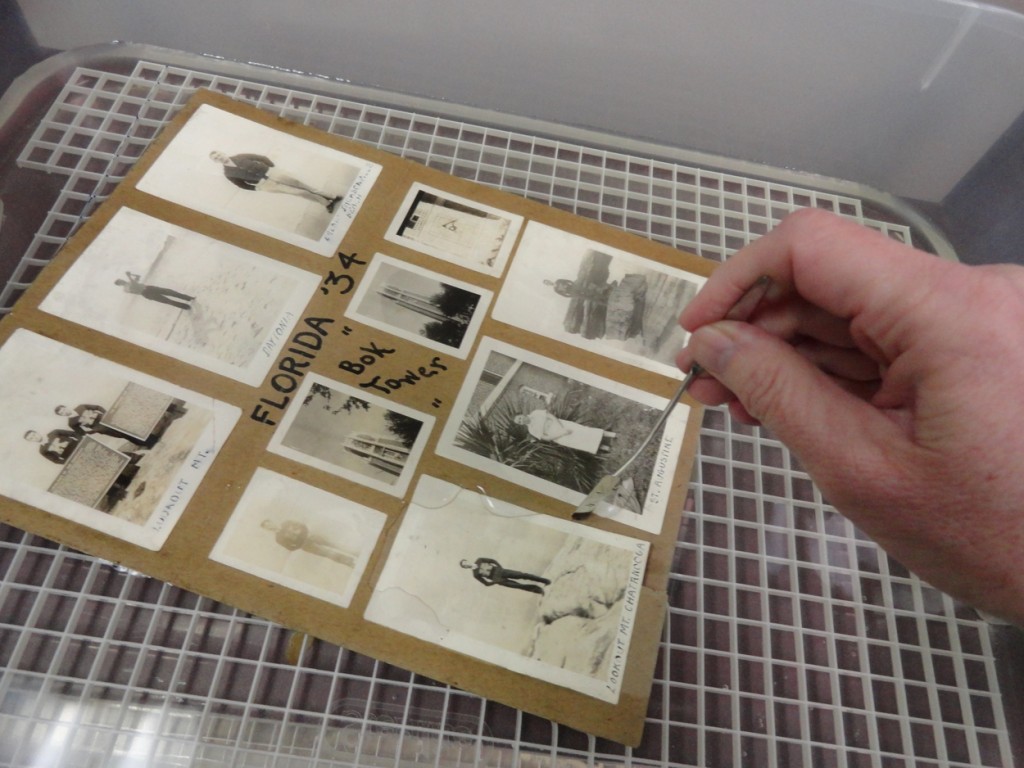 Using my microspatula to ensure the cardboard is submerged.

The above step is a little controversial, perhaps, but I had seen it done, before, and had tested the ink and photos first, as well as scanned them. You would only do this if the adhesive was water soluble. 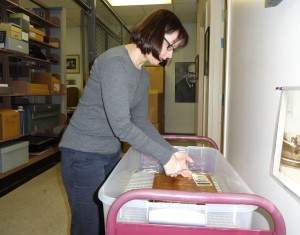 Here I am, lifting away each picture, one after another. 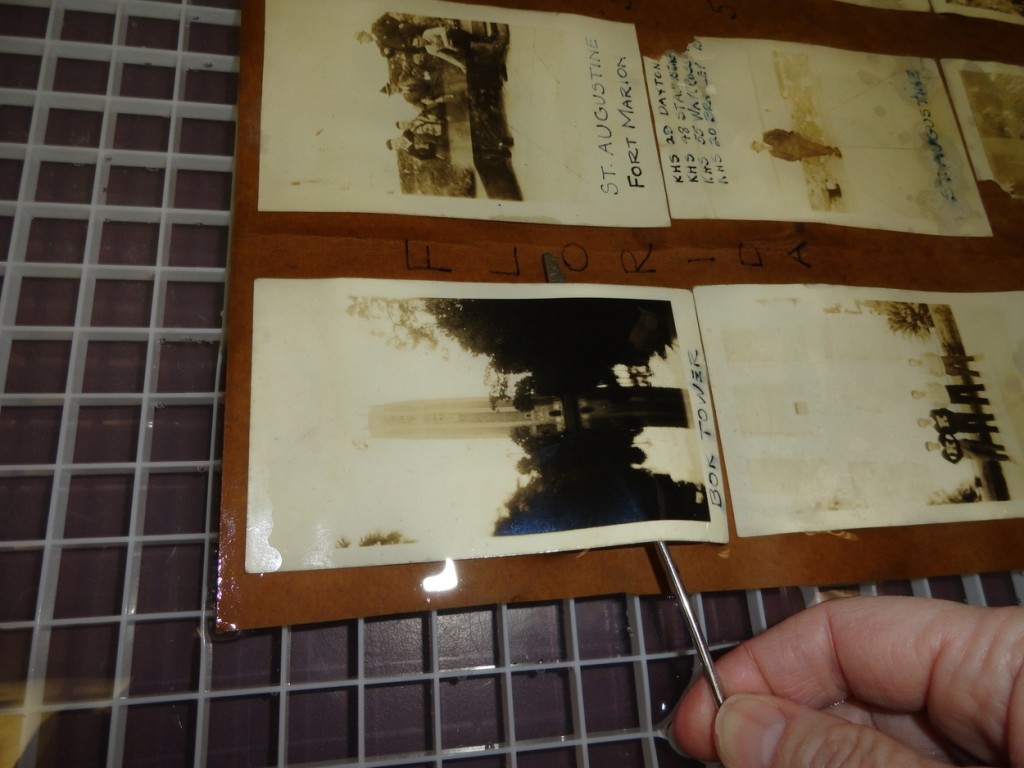 Some of the photos could lift away after just 30 minutes. 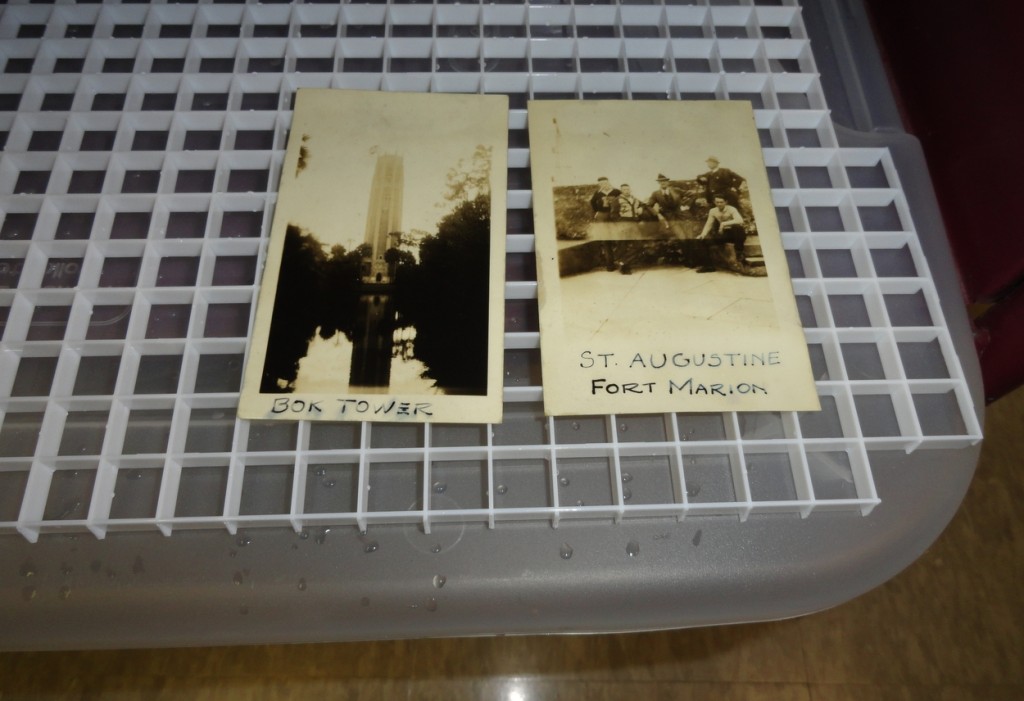 Placing the photographs on a drying rack. This step eventually proved problematic. 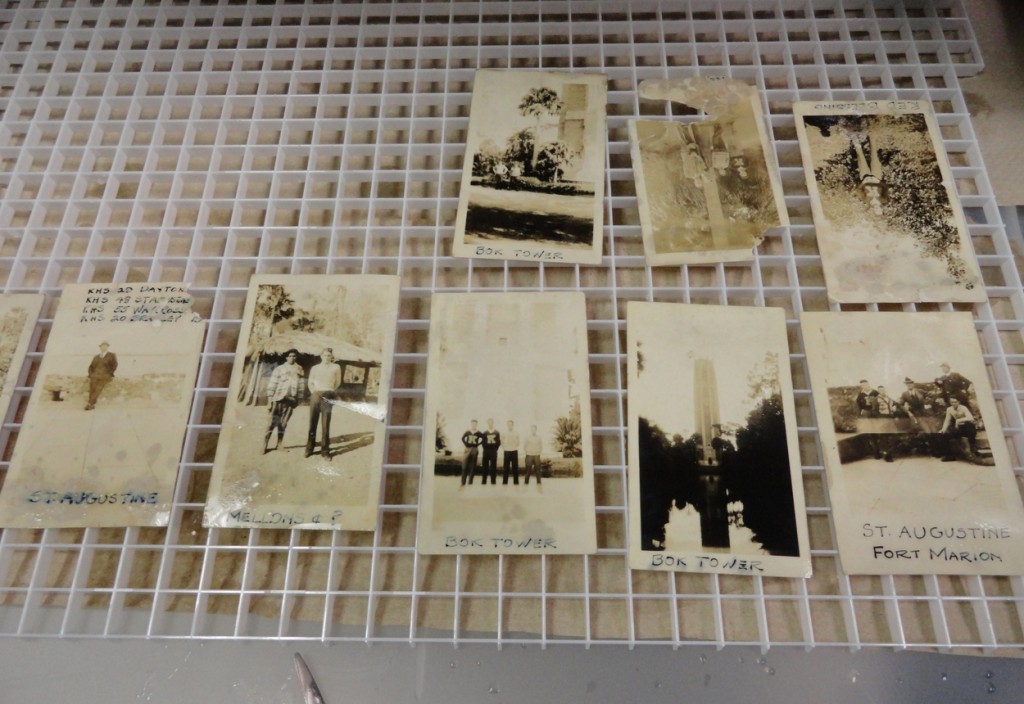 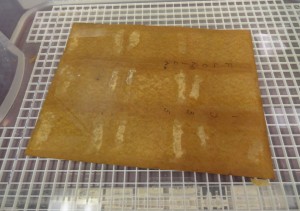 The now wet and empty cardboard was discarded.

Due to the very wet photographs drying in a low humidity (35%) environment and without any kind of weight on them, they curled like you wouldn’t believe. Once they were dry, no amount of time under a press was going to help. The photos needed to be humidified and allowed to dry safely but this time with weight to prevent curling. 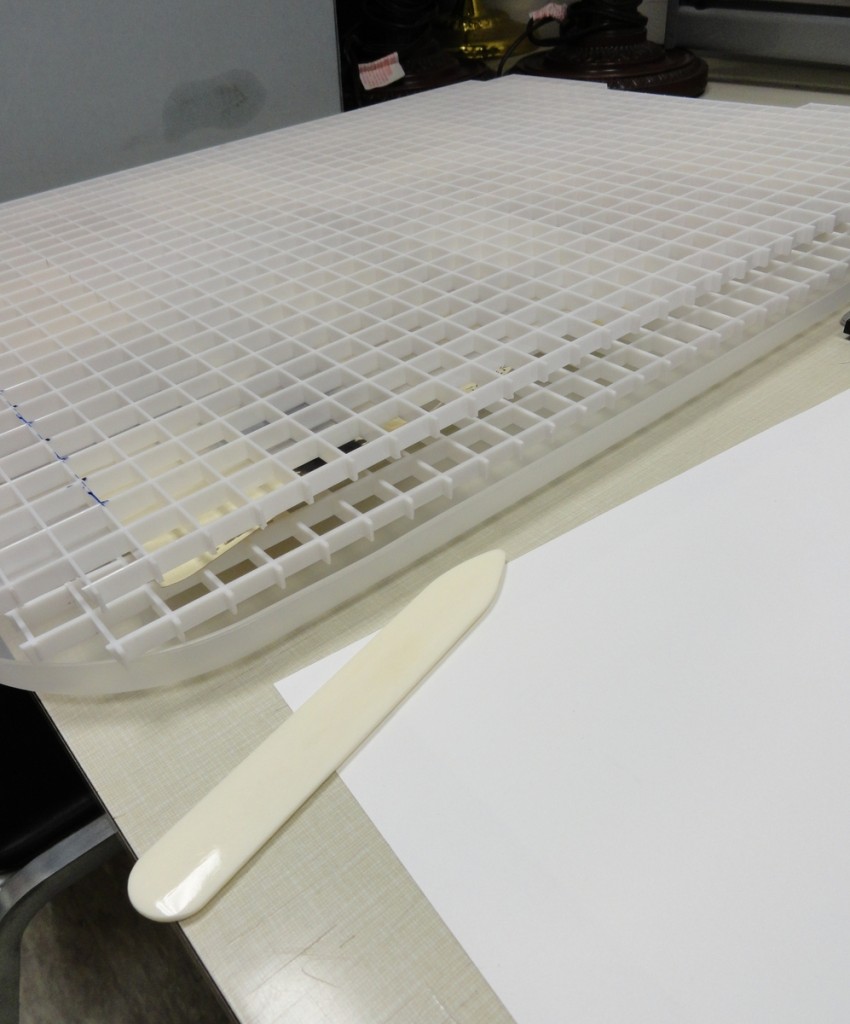 Making a wax paper sandwich, as TSLA’s Conservation Manager Carol Roberts, phrased it. The photos are placed onto the rack. A layer of wax paper is stretched across the top. Another rack is placed on top.

I used the bone folder to adjust the photos under the wax paper, making sure the rack did not come in direct contact with the images. 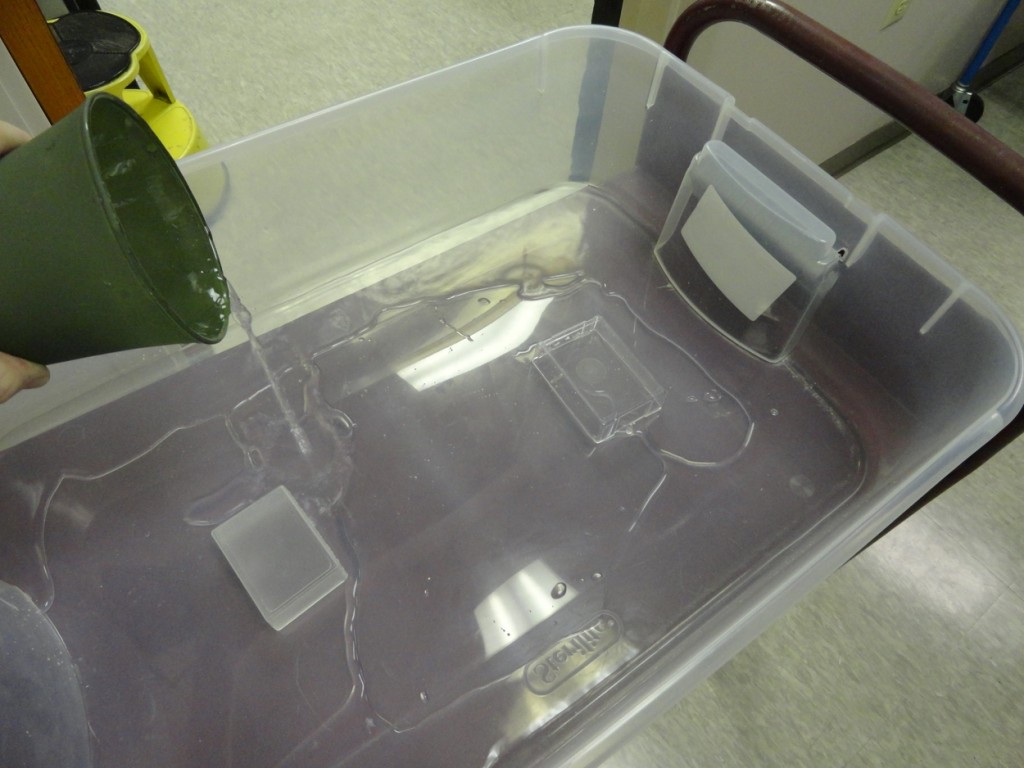 Adding water to the humidifying tray. Two plastic stilts will elevate the racks above the water line. 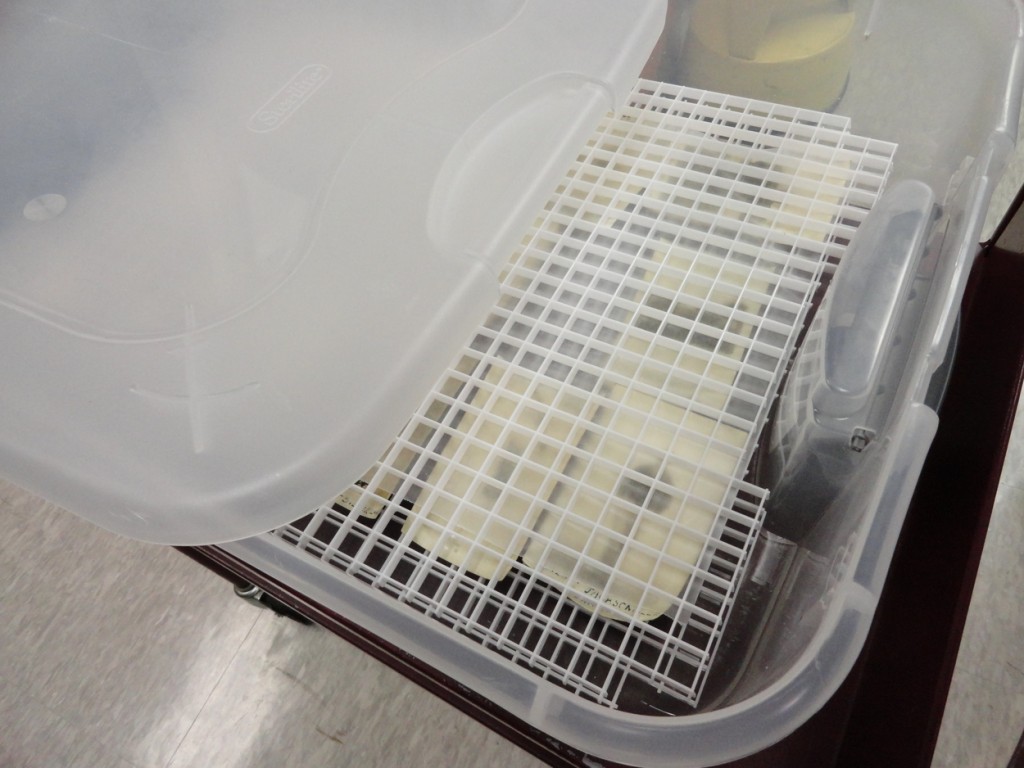 Placing the racks into the tray, covering with a lid, and setting the timer.

I checked on the photos every 15-30 minutes and kept them in the chamber for a total of an hour and 20 minutes. 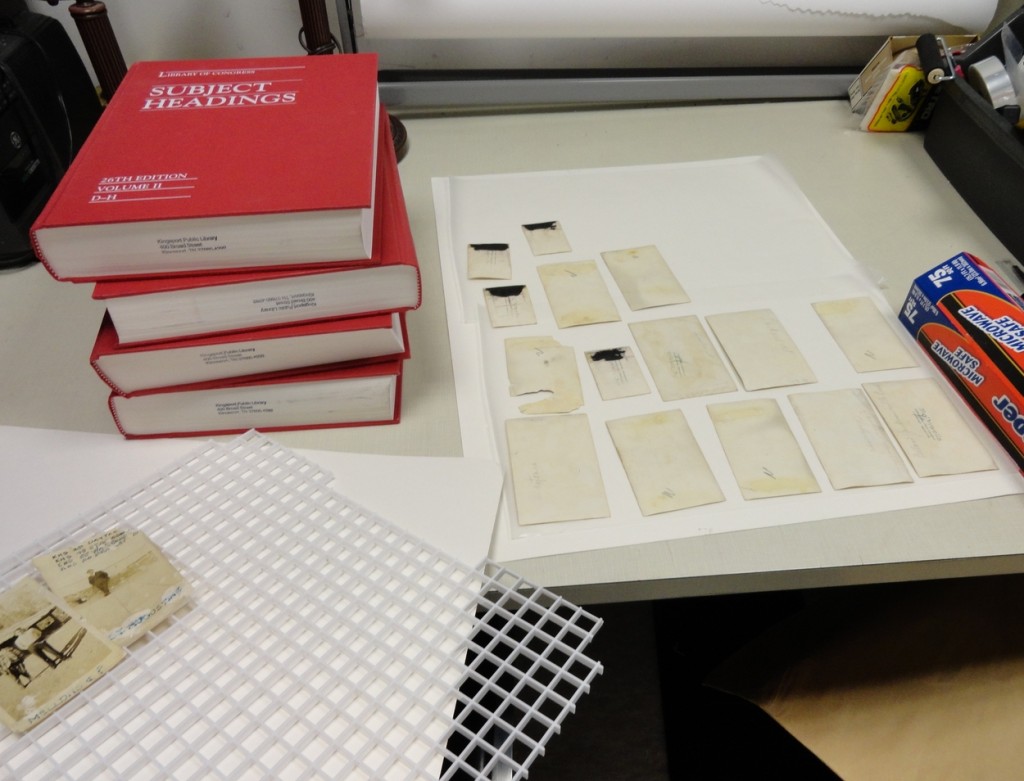 Carefully placing the humidified photos onto a blotter covered with wax paper. Another blotter goes on top.

This process had to be done very quickly. It required two of us to transfer the photos to the drying system before they could begin to dry and curl! Keep in mind, these photos are only moist, they are not wet through. 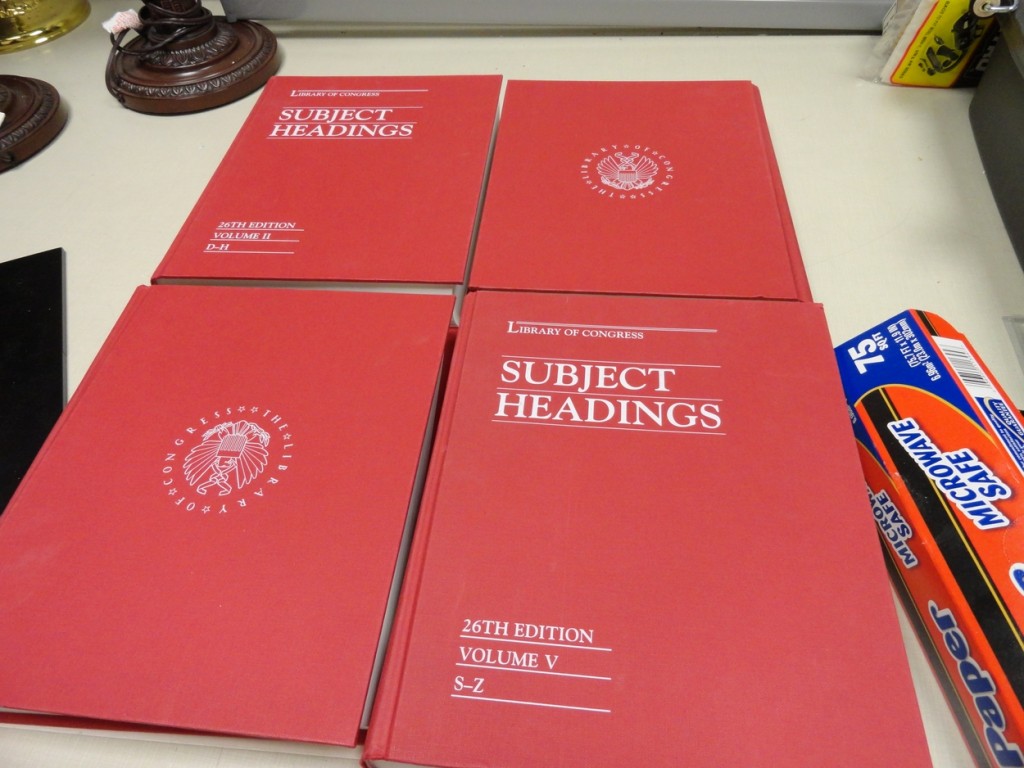 I weighted down the top blotter with heavy subject heading books. Thank you, Library of Congress.

The flattened photographs are being placed in plastic sleeves and can now rejoin the rest of the collection, which is open for patron research. Here is one of my favorite images from the two posters. 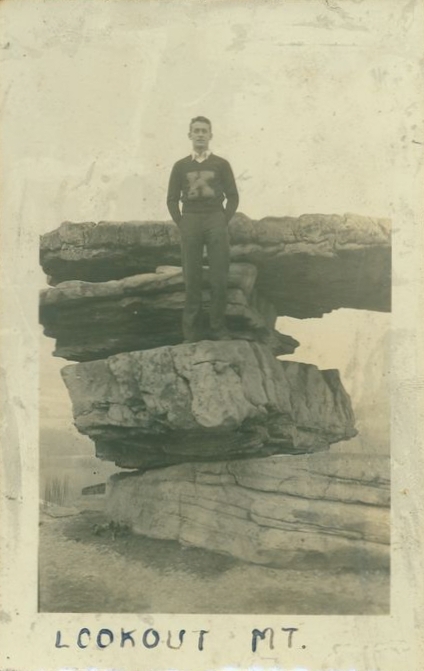 I love the idea of a handsome, young, scholar-athlete proudly representing Kingsport all over the South!